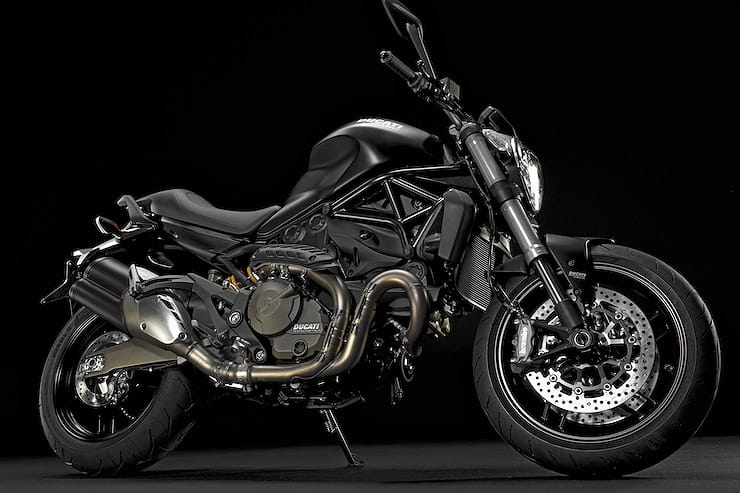 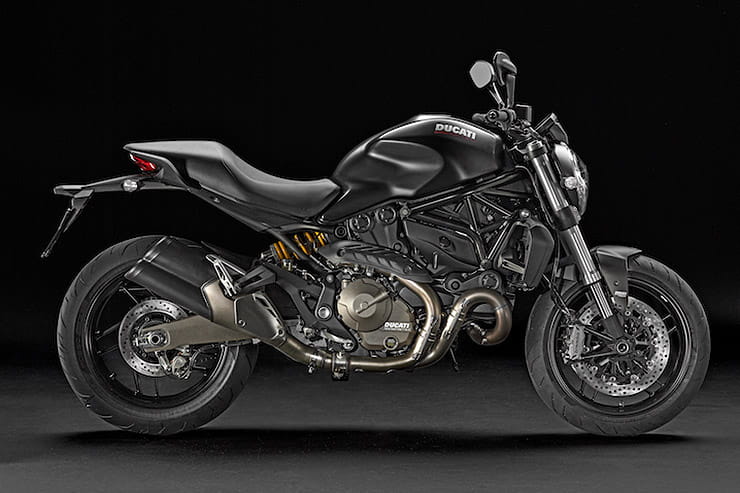 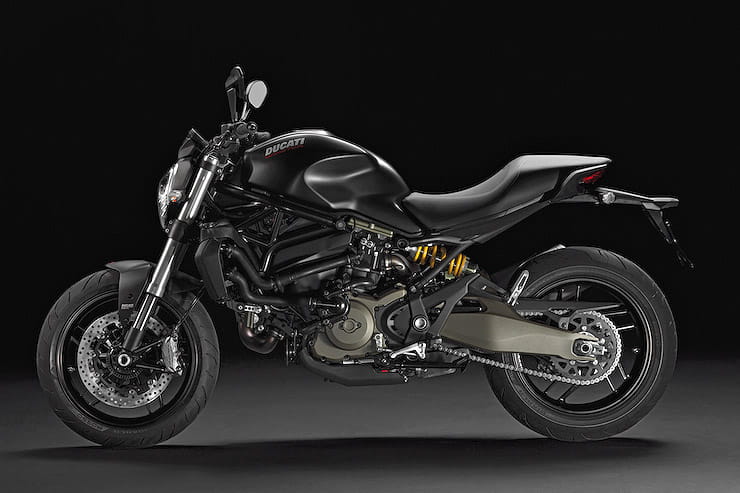 Think Monster and what comes to mind? Air-cooled, steel trellis chassis, stiff suspension, punchy motor? Well, all of that has changed with the new liquid-cooled 821, and most of it for the better.
The 821 Dark is the slightly cheaper version of the Monster 821. But that doesn’t make it any less fun to ride. In fact, in lots of ways the smaller, revvier 821 is nicer to ride than the brutal Monster 1200.

Ducati has sold more than 250,000 Monsters since the first one was released in 1993, so it’s pretty important for the Italian brand to get it right. And though the Monster’s creator Miguel Galluzzi’s original concept of ‘a saddle, tank, engine, two wheels, and handlebars’ has come a long way in the 21 years of the Monster, the essence is fundamentally the same.

So what’s different to the Monster 1200? Well, the engine for one. It’s an 112bhp version of the Testastretta lump that’s taken from the 821 Hypermotard and Hyperstrada. The chassis, bodywork and styling is the same as the Monster 1200, but on the 821 you get a double-sided swingarm rather than the bigger bike’s double sided swingarm. The whole bike weighs 179kg dry rather than the 1200’s 182kg claimed dry weight too.

The 821 Dark is £8795, compared to the red, or white non-Dark bikes at £8995 which means it’s £200 cheaper than the standard bike. The only differences are that you don’t get a seat cowl, and you get a matt black tank, seat unit, and black frame. 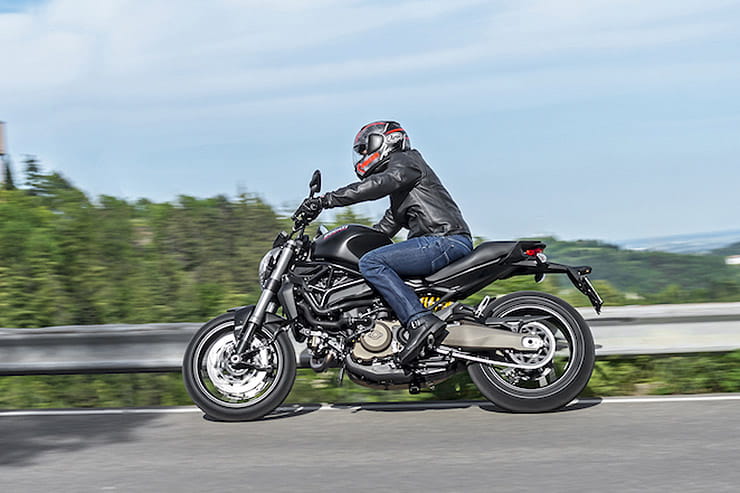 Back in 1993 when the first Monster was launched it had 80bhp (claimed). This new ‘little’ Monster has 112bhp. It’s not aggressive like the big bike, which keeps you on your toes, but in lots of ways actually works better than the bigger lump. It’s never frightening, but gives you enough grunt to make it live up to the name Monster, even if it’s not quite as punchy low-down as the air-cooled bikes.
The motor is punchy at low revs and has plenty of go even in top gear at 70mph to go for an overtake. The fuelling is spot-on, it’s tractable in town at low revs, feels really smooth and revvier than the bigger lump.

Where you sometimes tend to fight the immense power and torque of the bigger bike, the 821 is rider-friendly, but still has plenty of speed to hit 140mph-plus if you want it. I don’t on a naked bike, but it’s nice to know it can. It’s also available in an A2-licence-friendly version, too.

Stricter emissions laws meant the Monster finally kissed goodbye to its air-cooled roots in 2014 when it became a water-cooled model that Ducati had previously dabbled in with the S4R. The purists were up in arms, but in the same way Harleys will one day all be liquid-cooled, it’s still fundamentally a Ducati Monster at heart, even without the air-cooled fins.

The version in the Monster 821 is the 8v 90-degree V-twin lifted straight from the Hypermotard/Hyperstrada. And though the water-jacket might hide some of that glorious air-cooled Ducati rattle of old, the twin standard pipes more than make up for it.

Clever electronics mean the bike sounds stifled when in neutral. Blip it and it sounds like someone has shoved a rag down your pipes, muffled even. But put it in gear and there’s a deep rumble as the exhaust flaps open up and let the bike breathe. That’s one way to fool the noise testing man I guess.

The noise sounds way better than any ‘entry-level’ Monster should do, with a deep growl in the mid-range. There’s a slight dip in the power around 7000rpm, again, I would imagine for the noise and emissions test, but other than that it’s revs cleanly and strongly. 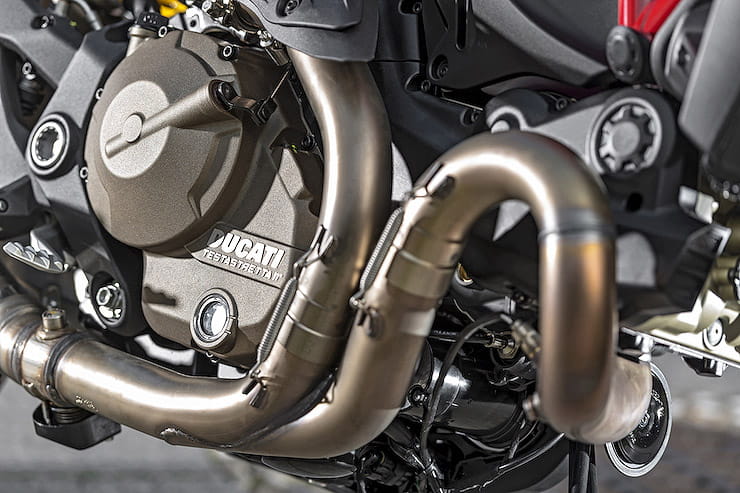 No great shakes either way. We returned 45mpg on average including some fairly spirited riding which calculates through to a theoretical maximum tank range of around 170miles from the 17.5-litre, although, in reality, you’ll be stopping far sooner than that.

Not only is the Monster 821 not so demanding in terms of power than its 1200 big brother, it also steers better, too.

That taller 180/60 rear tyre means it’s a bit more eager to get into a corner. It’s not alarmingly fly weight and twitchy like the old bikes, but is quick steering all the same where the 1200 occasionally feels reluctant to turn. Being more budget, the 821’s suspension isn’t ultimately as plush, nor as adjustable, as that of the 1200, but still works great.

I’m 15.5 stone and the rear felt fine for me, the front never felt choppy on bumps or underdamped when riding fast. In the wet there was really good feel from the Pirelli Rosso tyres and a good connection from the throttle to the engine meant you could pile on revs without upsetting the bike, or making the traction control kick-in. 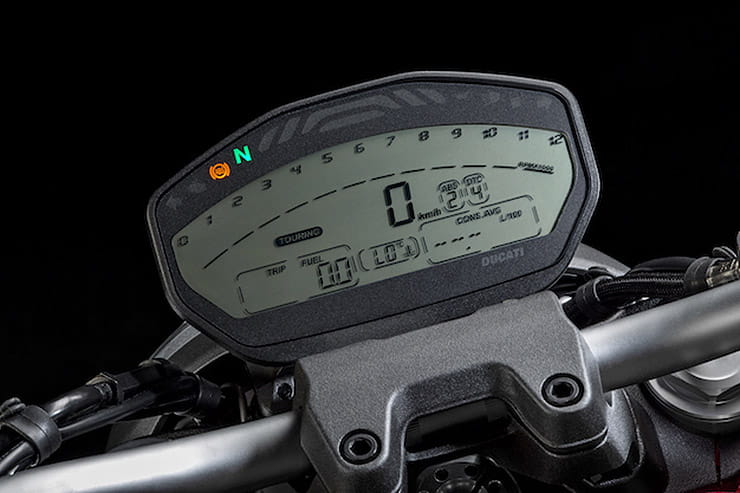 The big Brembo discs with slick monobloc radial calipers are also straight from the 1200 and are spot-on, the ABS never really chimes in, The only criticism is the lever feels slightly cheap, as is the clutch…

Being a raw roadster, no Monster is built for touring, but the 821 is comfortable enough at 80mph. Like its 1200 bigger brother the footrest hangers get in the way for people with big feet, and its seat was a bit too low for me (a higher one is available). But other than that, it’s a great.

The 821 doesn’t get the fancy colour TFT dash from the 1200, instead being a mono LCD version from the Hypermotard. Even so, they’re decent quality. There are three riding modes, Sport, Tour and Urban, which you can switch between easily on the left-handlebar button. I left it in Sport most of the time, and never went near Urban. 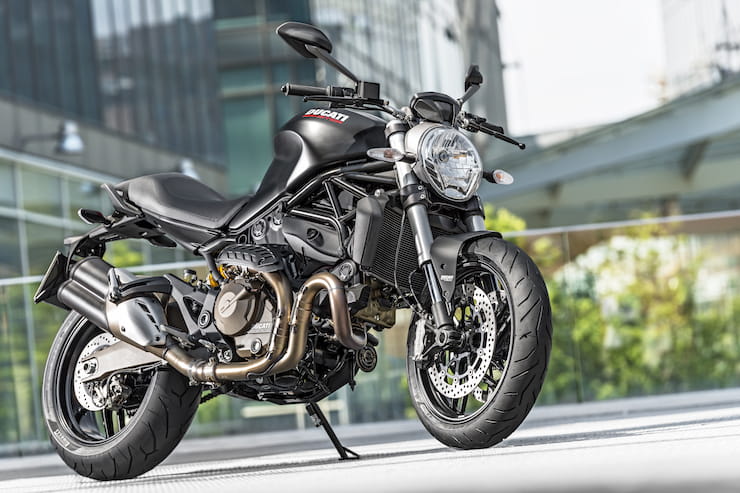 Ride the 1200 if you can get a test ride because it’s hilarious and most of the time is a touch too much. Personally I love it for that slightly macho over-the-top-feel, especially in the 1200S with its 145bhp that we have as a long-term test bike.

But for most people, most of the time, the 821 gives you a versatile, cool bike with the right badge on the tank, and at 821cc it’s hardly a small motorcycle.

In fact there’s very few things wrong with the 821. Purists will argue that the exhausts and liquid-cooling are messy. I say, move with the times.

Three things we love about the Monster…