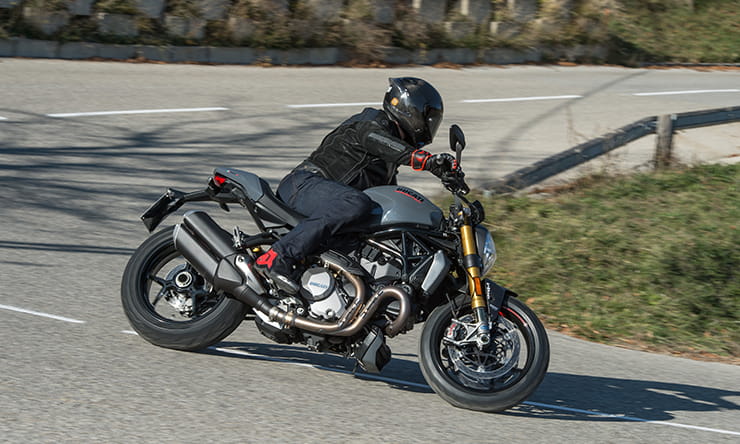 In the recent spate of massively powerful naked bikes there is one statistic that stands out; bhp. If it hasn’t got at least 150 horses then it’s likely to be deemed not good enough to join the party. 150bhp is what a Fireblade made in 2001 by the way but then again we are in a world where a 959 Panigale is now considered a ‘middleweight’.

So when Ducati introduced the world to the revised-for-2017 and EURO 4 compliant Monster 1200 S model at the Milan Motorcycle Show earlier this month the most obvious question was, would it come close in terms of power to the 160bhp ‘R’ model launched for 2016 and if so, why would you choose the R?

The latest version of the grunty 1,198cc, Testastretta 11° DS engine features new throttle bodies delivering 5bhp more than the outgoing ‘S’ model bringing it up to that magic 150bhp mark. While the Ducati quickshifter taken from the Panigale is now equipped as standard and that’s both up and down the gearbox with the autoblipper. It can be switched off or for use up the ‘box only via the new TFT display if required though I’d really recommend making the most of it.

Stepping onto the bike for the first time at the International Press Launch in the glamorous surroundings of Monaco and the first thing to notice is the taller riding position and the way in which it shoves you forwards into the reshaped fuel tank. You certainly feel part of the bike with knees enveloped in the sides of the tank and the seat angle combined with foot peg height and handlebar positioning. On a bike like this you don’t want to be upright and pootling about but rather enjoying its bark and power instead.

To the naked eye or even at first glance there’s little that stands out as new but actually there’s not a lot that remains from the 2014 version apart from the tubular steel trellis frame. Stand them side-by-side and the refinements of the new bike, its angles and tidy finish clearly demonstrate an elegant, modern day bike. 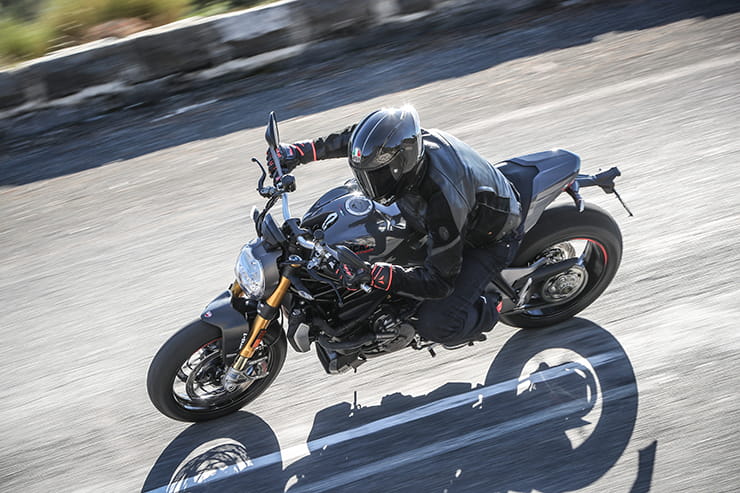 The Monster is no looker but it sure pulls
Michael Mann, Web Editor, BikeSocial

Ducati were quick to demonstrate that the 2017 model is not just a facelift and that little list just goes to show how much development there’s been.

The liquid-cooled twin cylinder lump that powers the bike has never been shy on enthusiasm and sure enough the mighty and lively motor is once again the golden egg on which the new Monster 1200 S is based. It’s soft down low in the rev range with surging power available delivered as smoothly as the Milk Tray Man serves his unsuspecting female benefactors. That wasn’t too common on the outgoing ‘S’ model but thankfully a snatchy throttle in Sport mode is a thing of the past, in fact so much so that I found myself questioning what purpose the Touring mode, one of the three interchangeable riding modes, serves. With temperatures cold enough for ice to be defrosting from some of the cars we passed the further into the mountains north of Monte Carlo we rode, we were encouraged to begin our 110-mile test ride in Touring mode. Sensible stuff for the first quarter of the test ride but after our first photography stop I used my ingenuity not only to amend the riding mode but then adjust the amount of Traction Control, Wheelie Control and ABS. If I can do it by a few clicks then anyone can.

The new TFT display really is next level stuff, it’s very user friendly and intuitive. Each of the three modes (Sport, Touring or Urban – the latter restricts power to 100bhp) results in an alternate display. For example, Sport makes he rev counter its priority while in Urban you see minimal data, concentrating only on speed. The operating system is simple too, press the centre of the indicator rocker switch to enter the mode settings or hold it down for the full menu, then scroll through the options with the up and down rocker switch placed immediately above the indicator switch. Simples.

The engine is lively without being obnoxious. It’s taken its quota of 150bhp and offered them on a silver platter instead of shoving them in your face. We encountered at least 5 million hairpin bends on the test route; uphill/downhill, 1st gear/2nd gear, left-handed/right-handed, wet/dry, every which way you can imagine. Yet each time the rev range of the Monster impressed, it’s no looker but it sure pulls. From as low down as tick-over the smooth power delivery offers sweet acceleration through to the mass rush of revs at the top-end towards its 11,000rpm red line – you think you’ve peaked enough to warrant another gear without being branded a hooligan but then there’s an extra surge around 8,000rpm. And when it’s time to snick up a gear then the mildest touch of the quickshifter and you’re away, loosing no momentum. Like a kid with a new bike a Christmas, the novelty of a quickshifter has yet to wear off on me, I wish every bike had one. To top things off, the Ducati’s works on the downshift too, and has an autoblipper. It’s a joy to listen to the momentary twin cylinder growl as you bang down the ‘box, the slipper clutch busy trying to prevent the rear from stepping out of line or locking.

The shorter wheelbase gives the Monster 1200 S more agility, it feels more comfortable and ‘set’ on the approach to quicker corners and behaves equally as well as under hard braking, while maintaining its stability in the middle of them. It reminded me of the MV Agusta Brutale 800 for athleticism. And that’s all with an extra 2kg on board over the 2014 bike, thanks primarily to the EURO 4 regulations resulting in larger exhaust components. The riding position promotes weight transfer to the front with the sportier-placed pegs offering good ground clearance. The bike’s agility is ably assisted by the new and adjustable 48mm Ohlins upside down front forks soaking up whatever lumps and bumps the French roads had to offer, those Pirelli Diablo Rosso III’s held firm all day and only when I teased the rear a little too enthusiastically on a damp corner exit did it momentarily break traction, thankfully the super sharp electronics saved any embarrassment. 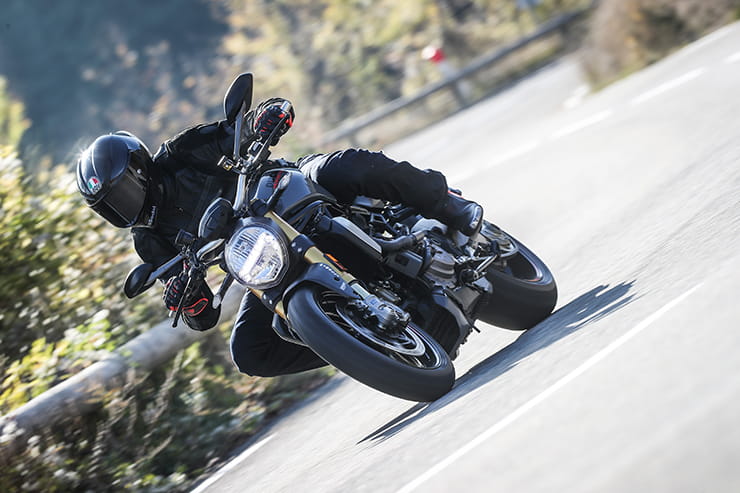 The rubber is fit for purpose, they suit the bikes’ all purpose persona well and look good to boot. I’d be interested in seeing how long they last in real world riding though.

The big M50-Brembo callipered twin 330mm discs are mighty in their one job of slowing the Monster, they’re hard to fault and even the ABS doesn’t interfere without a little tap on the shoulder before assisting. These are the same components as can be found on the Panigale by the way. Yep, that’s how good they are.

The system even has the latest Cornering ABS system which sorts out how much brake pressure to apply to both the front and rear even at considerable lean angles. So if you’ve gone in too hot, the idea is to trust the brakes even when cranked over. Good luck with that.

Having ridden the previous incarnation as a long-term test bike for a good portion of 2014, I can say with confidence that an extremely capable Monster just got a whole lot better. ‘elf and safety regulations might have stifled the performance, noise and looks of many 2016/17 bikes and to a degree there’s a slightly less raspy and raucous growl from the L-Twin motor in the 1200 S but everything else about the modern-day Monster is certainly more refined.

The ‘R’ model will cost you at least £1300 extra and while it isn’t equipped with a quickshifter it does have an extra 10bhp at your disposal, a taller seat and a steering damper so the S and R have certainly become closer and it’s now down to personal preference. 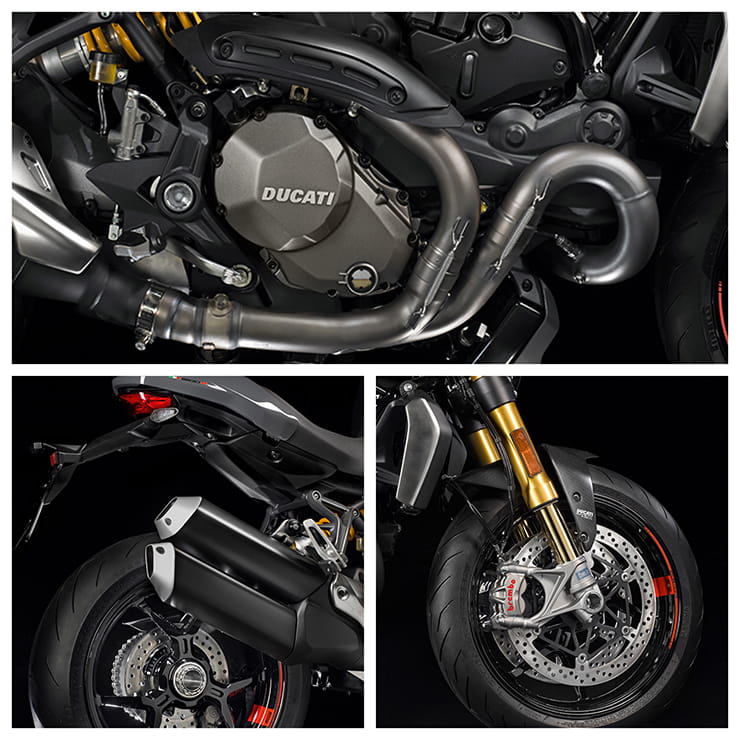 On the downside, the Monster 1200 S doesn’t have the best turning circle nor does it have cruise control or heated grips. That side-slung exhaust can get warm against your legs in slow moving traffic or when filtering too. I have size 10 feet and prefer to ride with the balls of my feet on the pegs, that meant resting my heel on the swingarm which was a little disconcerting when it moved up and down soaking up the mountain road bumps, though this is more user related rather than a fault with the bike.

Then there’s the fuel range. We covered 110 miles on the launch and had to fill up at least 30 miles from the end. Ducati’s claims of 54.3mpg will have been calculated after official tests but I managed just 35.7mpg at an average speed of 26mph (that’ll be down to those hairpins as well as Monaco traffic). Its economy isn’t devastatingly poor but someway off what it could do when ridden not as it was designed to for.

Overall, the new Monster 1200 S is a real step up from the 2014 version and that was damn good already. The strength of the engine, it’s character on the road, build quality, ability and stability in the corners plus immense brakes make the new Ducati a force to be reckoned with but it really needs to be with a £14,295 price tag (that’s for the red bike, the Liquid Concrete Grey colour is an extra £200). Tri Options deals will be released in January in time for when the bike hits the UK dealers so that might help ease the financial pain a little. Book yourself a test ride and let us know how you get on. 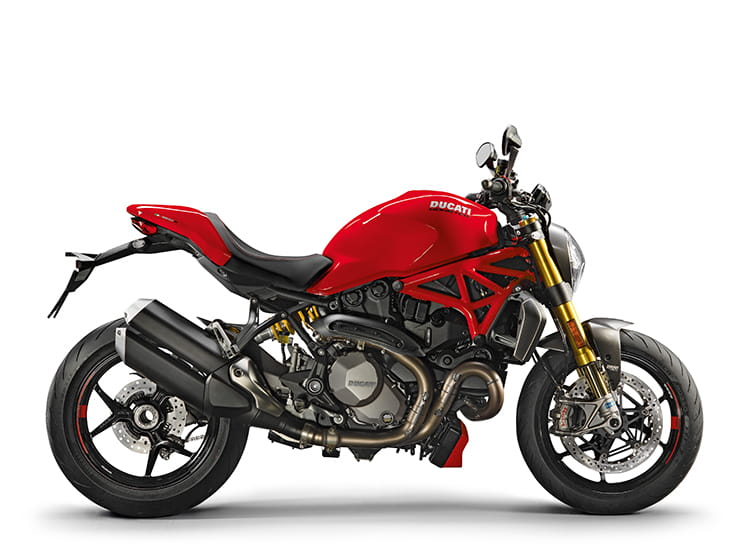 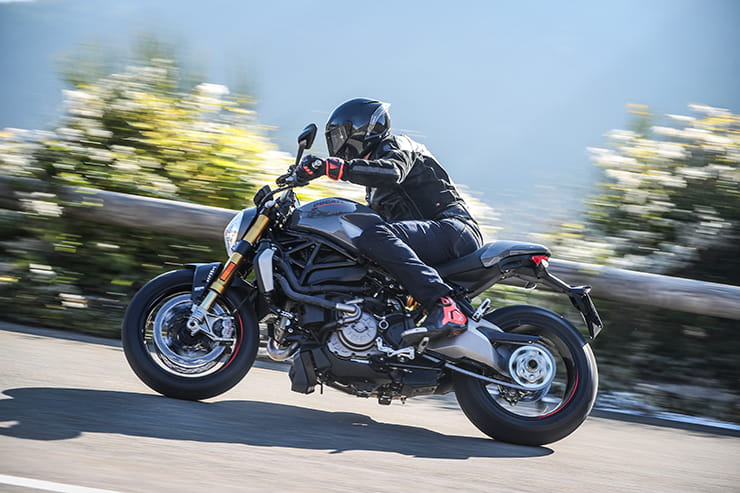