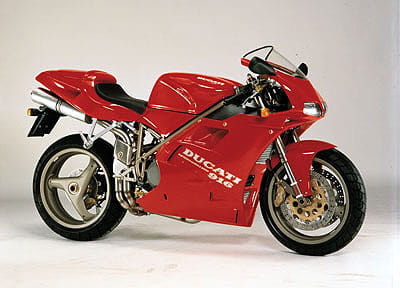 Ducati hoped for massive success both on and off the racing circuit with the 916 – and that’s just exactly what it got. The icing on the Italian cake was a motorcycle that became a legend and kept the Bologna factory in business.

World Superbike trophies came thick and fast – especially in the hands of the UK’s own Carl Fogarty. Of course, these racing bikes were a little more special in their chassis and engine departments than their shop counterparts but it meant the expression “race today, buy tomorrow” wouldn’t disappear from a Ducati salesman’s training manual.

The 916 has everything to make it a winner then and today. 916cc of Italian liquid-cooled V-twin feels lumpy but right and, better still, sounds right with the obligatory Termignoni race exhaust system in place. That engine uses old-tech know-how to make modern-day power and torque. Many hearts still flutter at the sound of a rattling dry clutch exposed to fresh air via an aftermarket casing cover – it also allows clutch dust to vent and lessen the chance of dreaded clutch drag when the clutch gets hot.

Living with a 916 (and following 996 and 998) isn’t easy. The engine needs regular service work to keep it in top condition. Anybody who has suffered the indignity and subsequent bill from a broken Ducati cam belt will tell you buying new in the first place would’ve been a hell of a lot simpler – and cheaper. Asking for service receipts is more important than asking for a cash price for the bike.

Handling is geared to circuit use. There’s nothing quite as special as a 916 flat on its side mid-corner. Feedback is absolute. On the road this translates as loose teeth fillings, sore butt cheeks and aching wrists – the latter because the clip-ons are placed low and forwards. But the same feeling of joy when opening the throttle to feel the rear tyre dig into tarmac comes anywhere you care to ride.

Age hasn’t affected the way the 916 looks. Single-sided rear swingarms are now rare as standard kit but still carry kudos. The underseat exhaust was only ever sexy on a Ducati 916/748 as the single seat of the monoposto 916 with white number board is an icon of style in itself.

+ points – Italian V-twin at its best…