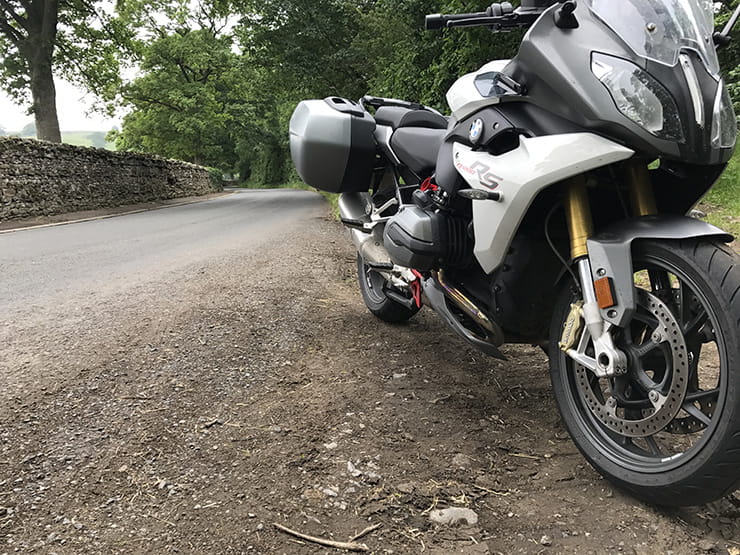 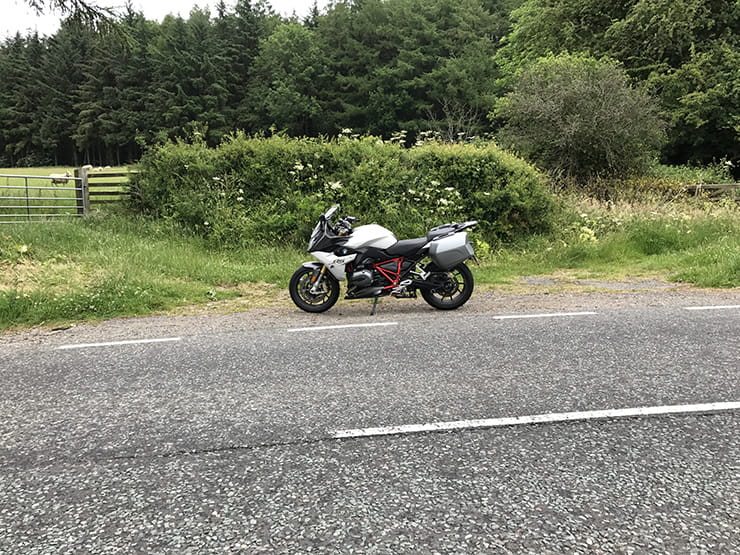 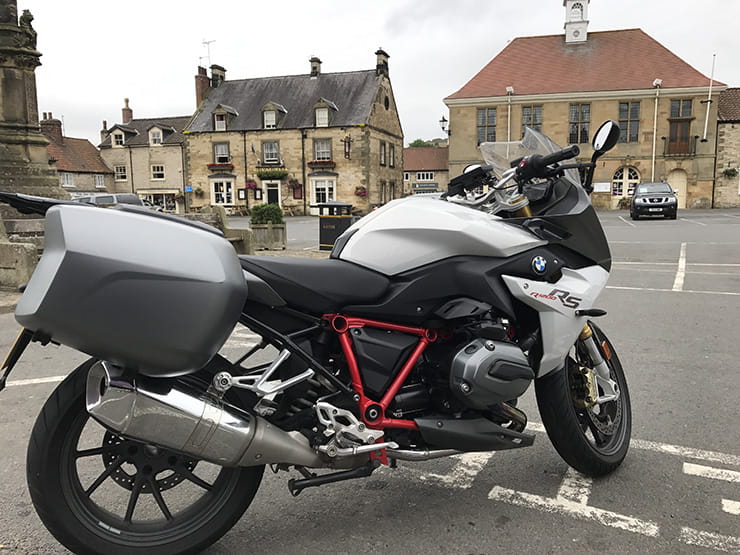 The long way round (and around)

That awkward moment when…you’re heading into a corner on 300kg of BMW R1200RS and rider, at er, let’s say, 59mph and you realise that under the trees ahead, previously hidden from view, the tarmac is wet…and muddy too. Gulp.

I’d love to say that my heroic TT-style riding genius technique saved us, but the truth is I did what every else does - shut the throttle and grabbed the front brake. Even at this tiny lean angle we ran wide, onto the mud. The front wheel locked and slipped left a few mm (which felt like six inches) and then gripped again. I released and re-applied the brake, coming almost to halt and wobbled round the corner at a little above walking pace.

It took a while to twig that what just happened was BMW’s cornering ABS at work. I’ve never experienced anything like it (and never want to again) and it wasn’t quite as subtle or finessed as I expected, but it works. I wonder if BMW make officially approved cornering-ABS-underwear to complete the experience?

BikeSocial publisher, Steve Rose took his long term BMW R1200RS out for a long ride on the longest day... 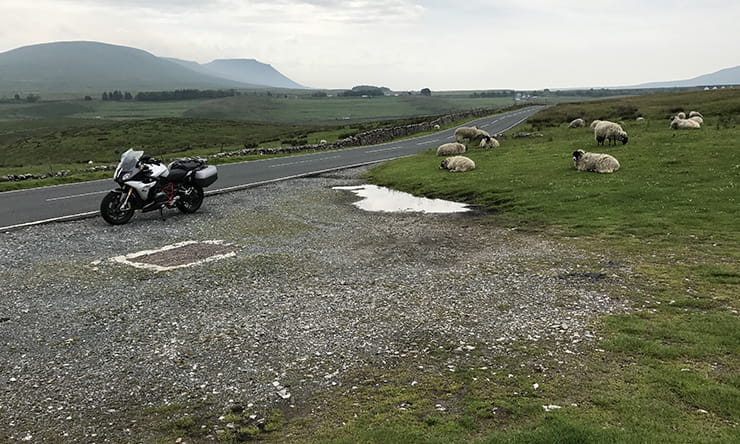 The plan was to head up the east coast, cut across at Newcastle and spend the longest day playing in Northumberland. 500+ miles on a comfy, sporty road bike in the late-June heatwave, returning vis Lincolnshire and a stop at Guy Martin’s pub to do a little review (the ‘work’ part).

Special forces troops disguised as sheep close in on Bike Social’s R1200RS. Only the smell of Kevin’s Brut 33 (third sheep from the right) gave the game away... 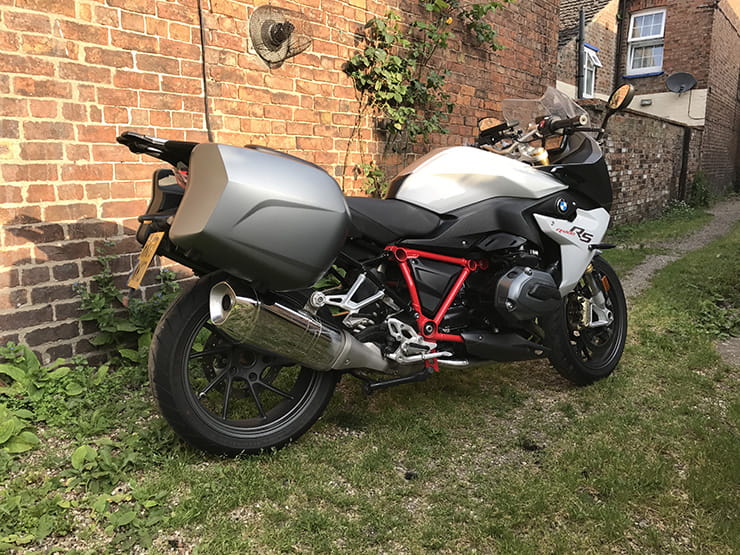 Early morning Lincolnshire is as empty, fast and inspiring as ever. Never truly scenic, but the roads are challenging, and always fun. Across the Humber bridge (bikes go free), around Beverley (the town, not your sister) and left onto the B1248, which is another open, easy, set of gentle curves – fast or slow as you like – punctuated by a handful of trickier sections. Today it’s a gentle ride, mulling things over, mind drifting while muscle memory, peripheral vision and all six senses take care of the survival thing.

6am, sun shining, ready to go. 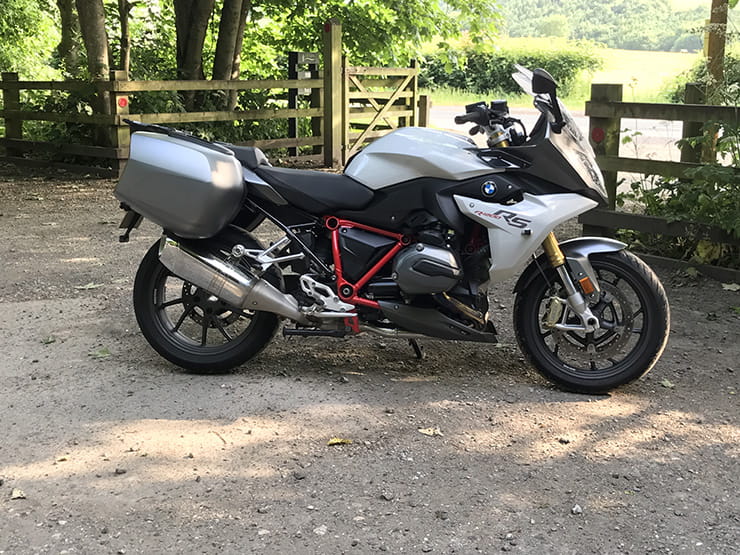 Passing through Wetwang prompts the usual giggles and internal questions about how you get on the National Village Naming Committee and what must this village have done to upset them. I need a pee, but ironically, there doesn’t seem to be a public loo in Wetwang, so I squeeze and wait for Malton. 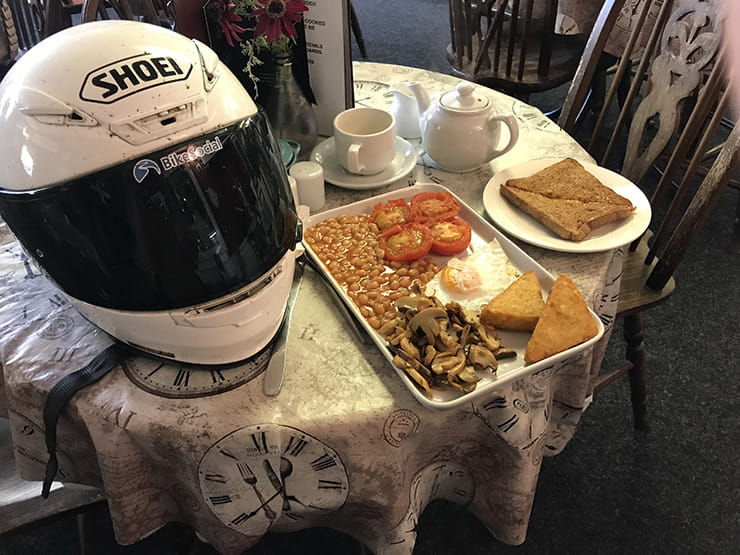 Helmsley is the first proper stop. Weary, hungry and thirsty, I need a break…fast. The food looks great, but if you’ve ever wondered whether frozen mushrooms are a good idea to save on waste…don’t. It’s like chewing a slug. 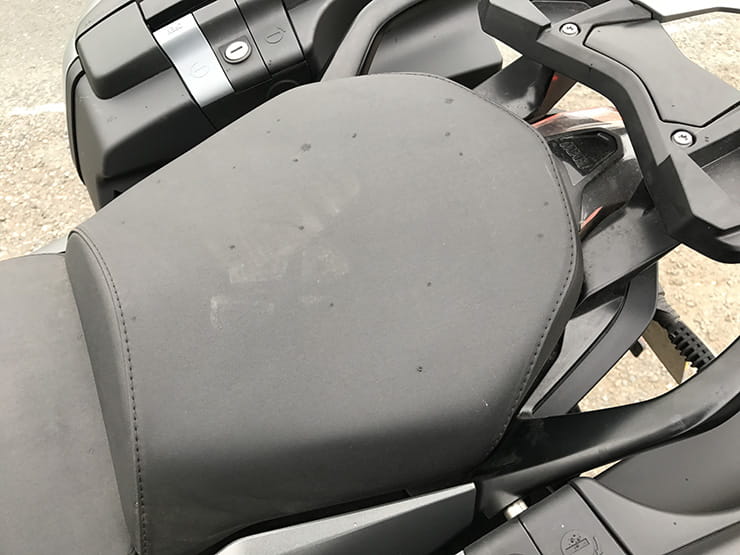 I haven’t ridden the B1257 to Stokesly for almost 20 years. Back then the bikes were already way too fast for what is a stunning piece of road, but demanding too and usually packed with local heroes coming the other way. There are dark clouds in the distance but the optimistic amateur weather-dude in me says they are high enough to be dull, not wet.

Now I’m focused, actively involved and loving every minute. There’s an almost-sensual lightness to the RS’s throttle that seems to link through the handlebars directly to the chassis. Turning this bike involves throttle, bars and bodyweight. It’s not like other bikes - light on its wheels but needs riding too.

The first 17 rain drops. Only a shower 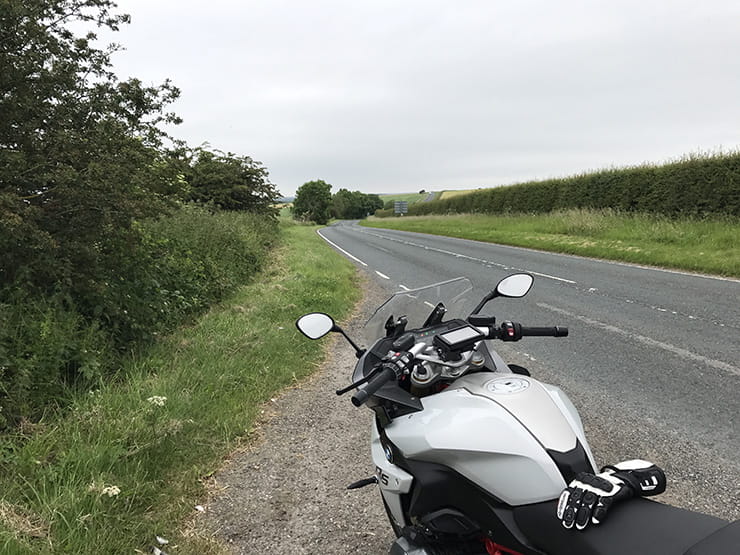 The new road surface isn’t draining properly. There puddles across the road with white foam as if something is leaching from the new surface. I’m struggling to go anywhere near as quickly as I’d expect to on what should be a very quick road, even in the wet. 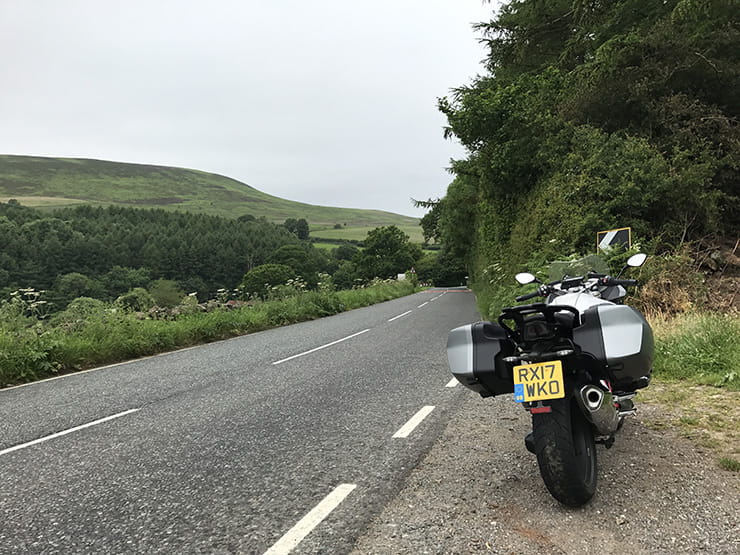 At Stokesly I concede that this is a bath, not a shower. Time to head south. To Ripon and the A6108. Worn surfaces, bumpy sections, mud, traffic and blind corners make this one of the best road test roads I know. I’ve ridden dozens of bikes here in all conditions including a memorable week on sports 600s in the snow. Today it’s half wet, half dry – even more challenging and one of those corners is where we came in with the cornering ABS event.

One of the biggest advantages of BMW’s Telelever front suspension is that it separates suspension and steering making it brilliant on bumpy, twisty roads. Unfortunately, the RS is one of a growing number of BMW boxers that have swapped Telelever for conventional forks and, on these roads, in the wet, this high-tech, sporty road bike isn’t as confident as the (Telelever-equipped) R1200RT tourer I rode here in similar conditions a couple of years back. 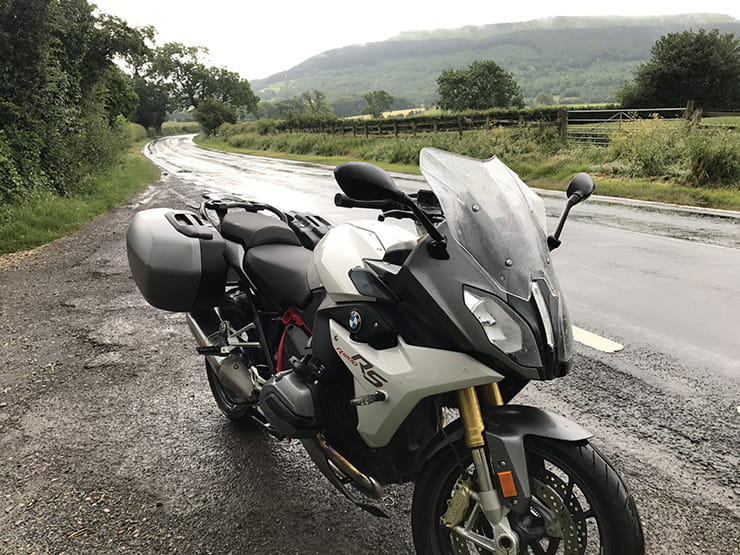 Once the road dries the R1200RS is back to behaving itself. The run from Aysgarth to Kettlewell over the top of the world is bumpy, narrow and stunning as ever. Foursies cream tea at the Cottage Tea Rooms is a welcome chance to cool down after a couple of hours honing, and then the final Yorkshire section across Blubberhouses Moor (I really must get on that naming committee) is a riot of too much throttle, a bit too much body language and all manner of TT fantasies. It’s a shame that no one told Hilary and Tensing that the actual top of the world was in Yorkshire, not Everest, they could have saved a fortune in crampons and been in the pub by tea time. 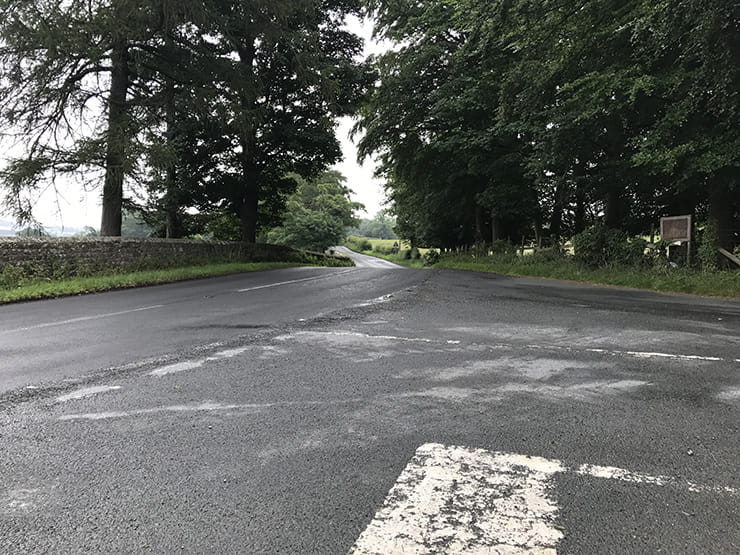 Another back road brings another suspension change on the move. I’m starting to see the point of BMW’s Electronic Suspension Adjustment (ESA). It has two settings controlling what I presume is the ‘Active Rebound System Engagement’ (ARSE). One is labelled ‘Road’ and the other ‘Dynamic’. 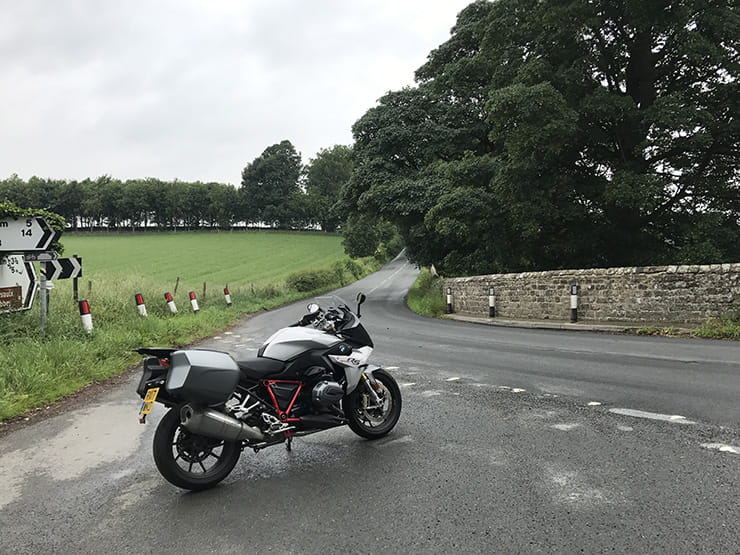 I know what a road is, there’s one about three feet below my backside, currently moving at, er, 59mph...ish. But when I think of ‘Dynamic’ my internal word association adds ‘Duo’ with  visions of caped crusaders and cartoon Blats, Kapows and Thwacks. Funnily enough, those are the sensations currently being transmitted to my arse by the BMW’s ARSE in ‘Dynamic’ mode as we make a clumsy job of getting from one end of the bumpiest road in the Yorkshire Dales to the other. Schoolboy logic determines that the ‘Dynamic’ setting might be German for ‘slightly less travel and a bit more damping control’ so I roll off the throttle, press the suspension-adjust button back to ‘Road’ and enjoy a softer, but still controlled ride. 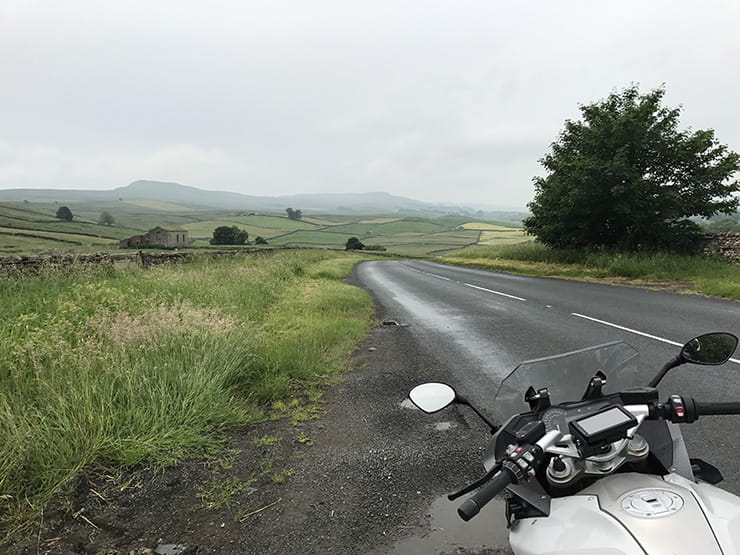 In much of our first 3000 miles together I’ve struggled to see any noticeable difference between the two settings, but here, on this single-track road, somewhere between Leyburn, Harrogate and Kettlewell (did I mention I might be lost?) I can feel the transition. I’m still being bashed up the backside, but in a less aggressive, more controlled manner. A more sophisticated electronic spanking if you like.

Still wet, still challenging, still better than being the office 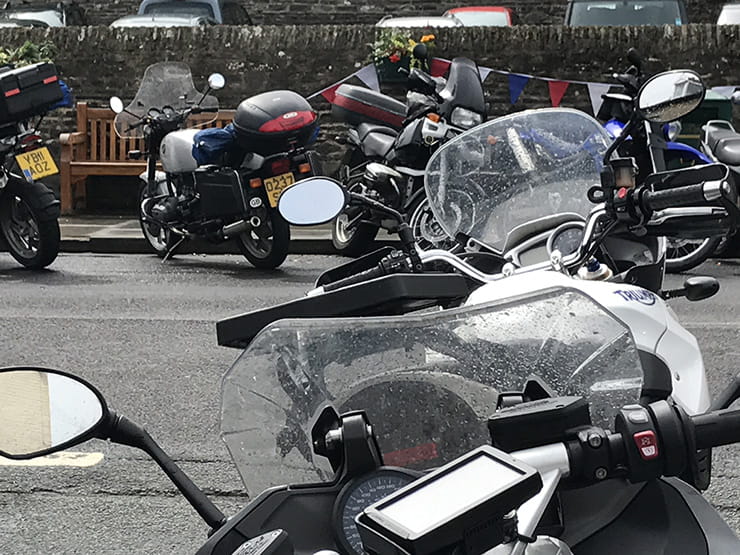 An hour later we’re at the The Marrowbone and Cleaver in Kirmington, Lincolnshire. Owned by Guy Martin and run by his sister. It’s a god mix of modern décor with traditional trimmings (the walls are plastered with WWII memorabilia in honour of Lincolnshire’s bomber command heritage) and some cheeky touches (large steel buckets for urinals in the Gents’ and a broken cylinder block screwed to the window frame), along with a room full of Guy’s biking memorabilia. 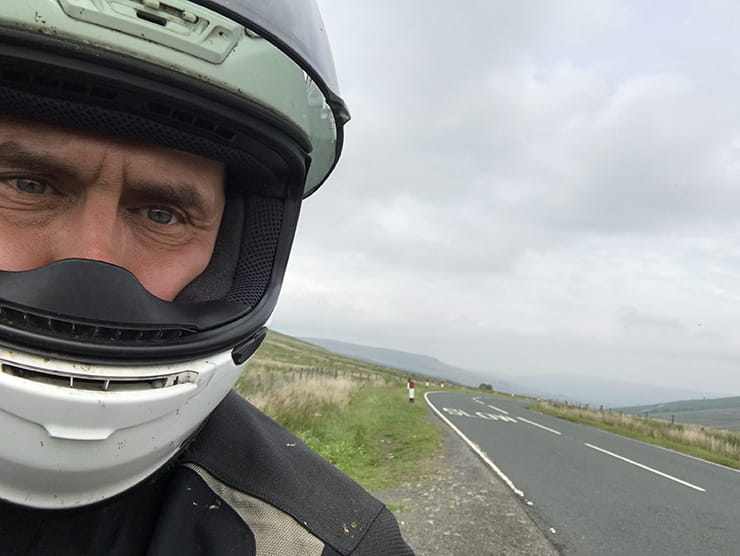 Busy for a Wednesday night and fast becoming a stop-off point for local riders, there’s good beer, a decent menu and easygoing, friendly atmosphere. After a long, hot day (437 miles so far) my pint of ‘Skull and Spanners’ shandy is done in about 90 seconds. An hour later I’m home, via a quick diversion to Willingham Woods’ bike meet. Knackered, smiling and ready for a long lie down in a dark room. 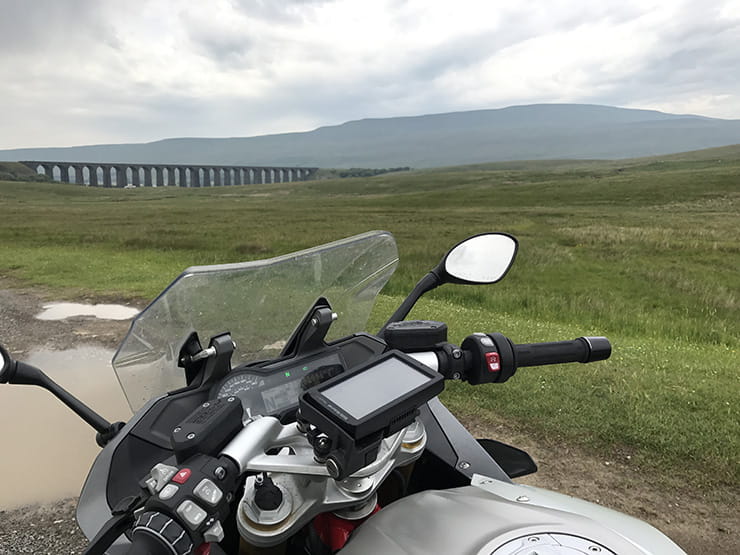 467 miles in 12 hours including four long stops is less than I was hoping for. Fuel consumption from the bike is better than usual at around 43mpg, fuel consumption for the rider is appalling though at one breakfast, two cakes and a full ‘double-scone’ cream tea. Apart from the stretch on my belt buckle, I have no aches or pains anywhere. 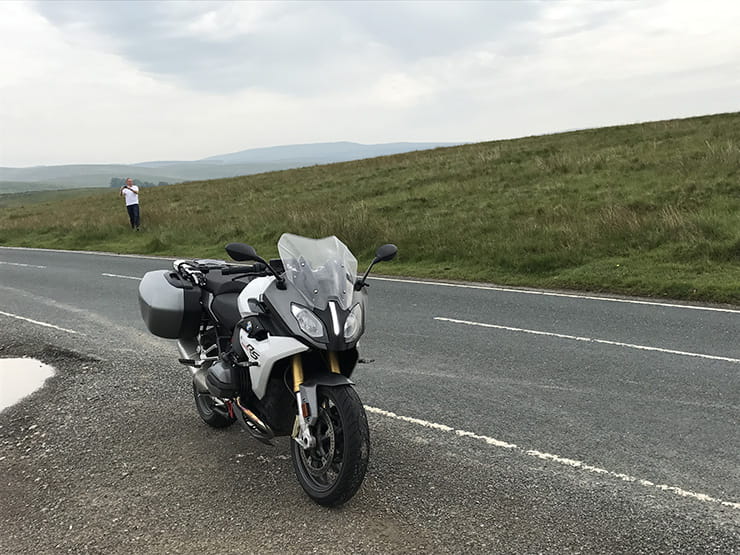 I really want to like the RS and mostly I do. But riding in Britain means riding in the wet and I still need to work out how to get confident on a soggy R1200RS and make all that technology work for me. Maybe I should move to Scotland for the summer.

Ten bonus points if you identify the photo bomber 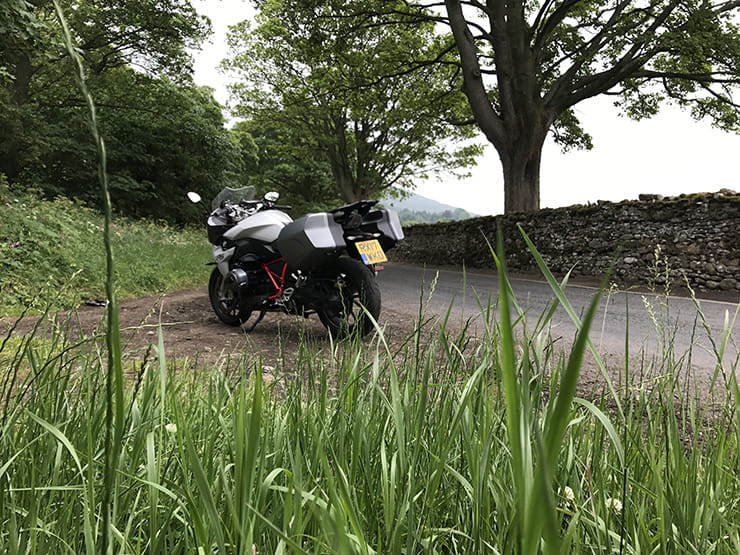 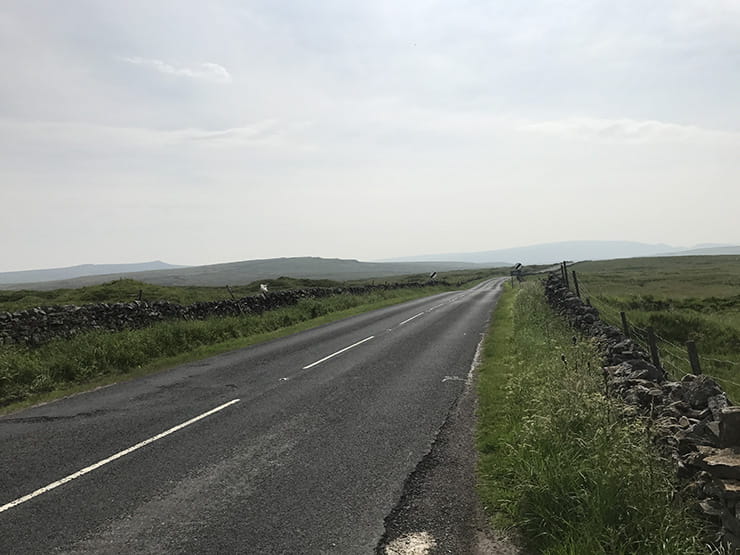 Top of the world minus one 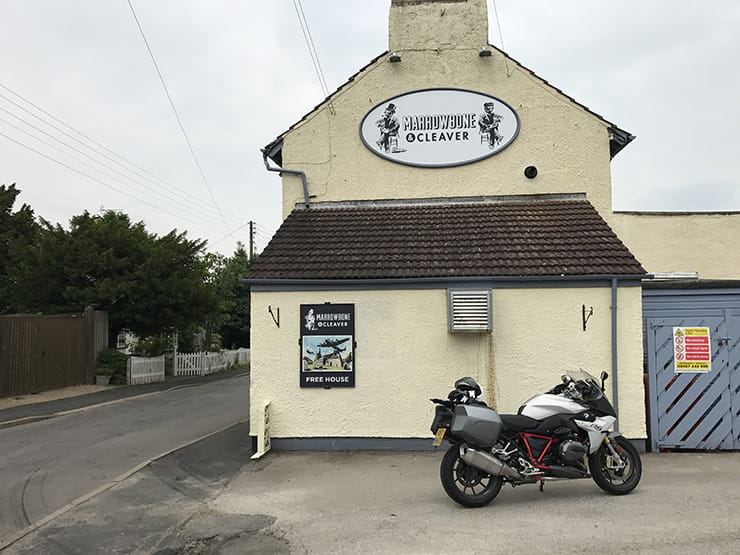 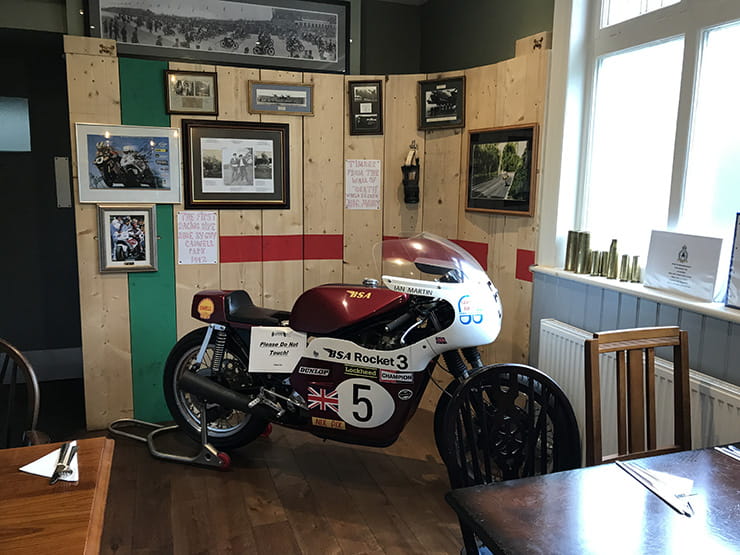 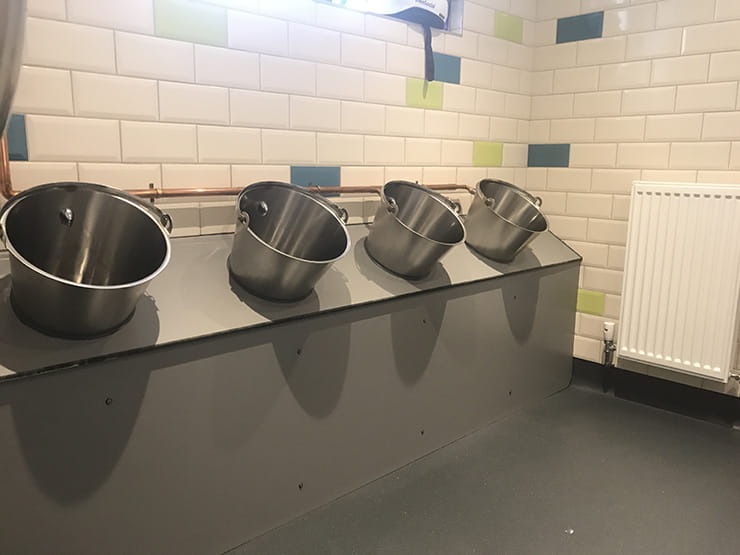 Fill these and win a prize