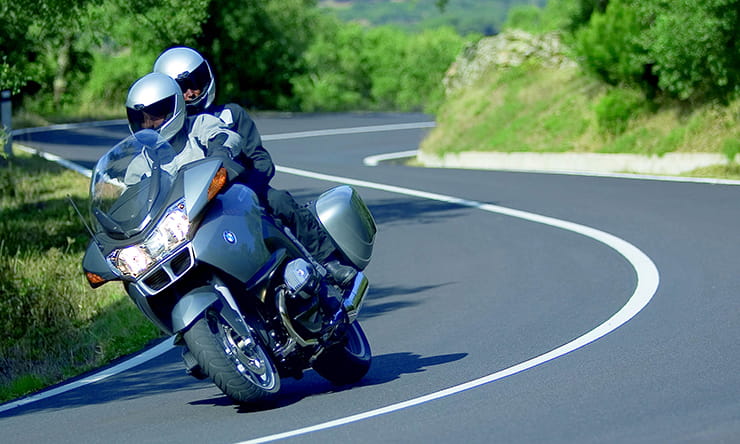 Previous to their sportsbike exploits, BMW built their formidable reputation on their tourers and the R1200RT is probably the best of the breed. Quite simply, it is one of the most refined, competent and hassle free tourers you can ever hope to buy. Not to mention the last of the air/oil-cooled boxer tourers, known by enthusiasts as 'oilheads'.

Initially launched in 2006, the RT replaced the aging R1150RT and in doing so injected a huge dose of extra potential into what was already a very solid package, while also ironing out a few of its faults. But most of the old bike’s issues stemmed from the fact it wasn’t only solid in its reputation, it was pretty damn solid in its engineering to boot!

The old RT tipped the scales at a chunky 255kg, making it a bit of a handful when you added the usual touring necessities such as a tank of petrol, full panniers and a pillion. BMW were more than aware of this and after redesigning the boxer engine and chassis for the R1200GS, they rolled these improvements out onto the R1200RT. Now 26kg lighter and with a host of technological updates such as electronic suspension, not to mention a far more attractive look, the R1200RT was ready to rule the touring world once again. Something it easily achieved. With an adjustable seat height, it's accessible to shorter riders too.

Even nowadays there few better bikes on the market for devouring miles than the R1200RT. The BMW is comfortable and with its 27-litre tank being claimed to see off over 300-miles between fill-ups, there is no need to stop as Europe’s open borders sail past. It is the complete touring package and while the updated 2010 model brings  a little extra power, there is absolutely nothing wrong at all with the single cam boxer engine. Some riders even prefer it. 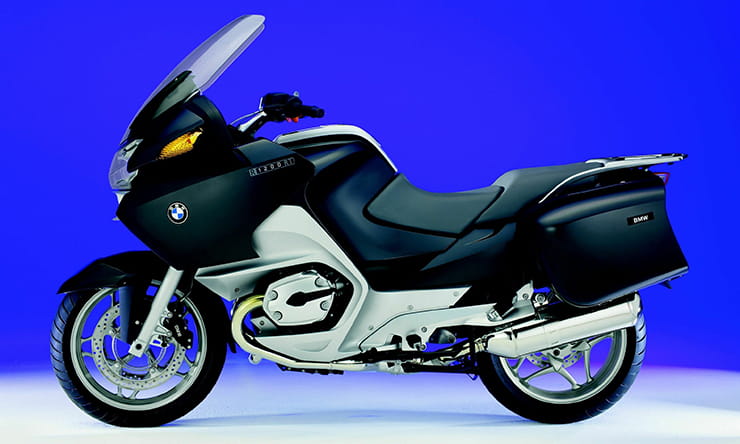 Service history is key to buying any BMW and generally most are owned by riders who take servicing very seriously and seldom skip an interval. An incomplete service history, even on an older BMW, can seriously dent its residual value. The other thing that really affects a BMW’s price is its list of official factory-fit extras. On an RT, items such as heated grips, ESA, heated seats, a top box and even accessory lights are almost expected by the buyer, and will therefore boost its value, so if you are after a bargain, go lower specification - just be aware when it comes to selling it on you will also be hit low by a potential buyer. RTs were a popular choice among police forces and the market is usually awash with ex-police bikes. These tend to be high mileage (although well maintained) and low spec, which is reflected in the price. These bikes tend to have a solo seat, narrower panniers and tell-tale calibration markings on the speedo, although some will have been converted to civilian spec. Although rare, BMW did offer a lowered suspension version of the RT out of the factory. These can be great if you are shorter in the leg, but are likely to be difficult to move on come resale.

The RT isn’t known for developing many issues, however always check for oil leaks around the shaft drive both where it meets the engine and the rear hub and listen out for any rumbles that may indicate a worn final drive bearing. As with most earlier boxers, the clutch slave cylinder likes to pop its seal and also check for signs of corrosion on the engine’s cases as the paint does come in for criticism. The RT is a big bike, especially when fully loaded, so check the mirrors and panniers for any sign of damage due to a low speed (or stationary) spill. Owners get annoyed about the RT’s weak front light and many fit aftermarket headlight kits, so just check that it has been done competently. The seat also comes in for criticism, so an aftermarket ones with extra padding are a good thing. If the bike has been regularly serviced, high mileages aren’t too much of an issue, the boxer will run and run all day long, however items such as the suspension and clutch can be worn, so check them well as they are costly to replace.

The R1200RT replaced the extremely popular R1150RT in 2006, expanding on the older model’s 1130cc motor with an all-new 1170cc boxer as well as shedding a load of weight and gaining a far more capable chassis and improved ergonomics. This model remained virtually unchanged until it received the latest twin cam boxer engine in 2010 as well as some small styling and technical updates. The R1200RT gave way to the brand new water-cooled R1200RT in 2014. 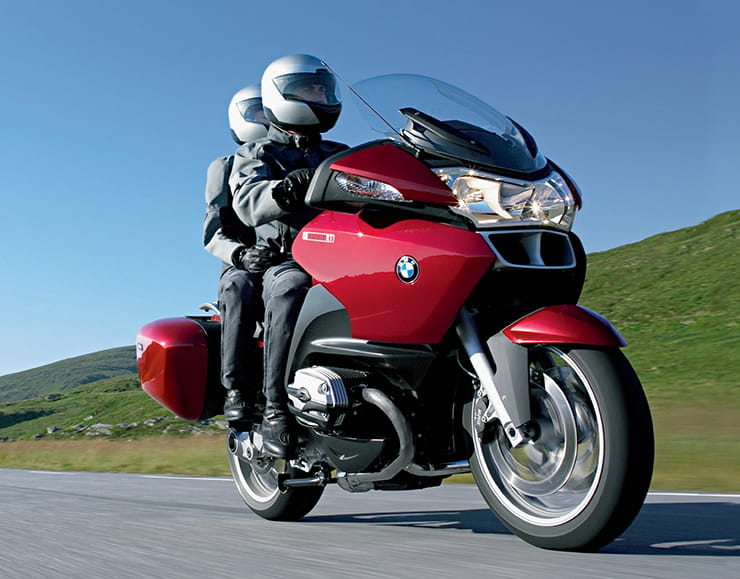 Good quality used BMWs tend to stay within the official dealer network, which can make searching out a bargain pretty tricky. The good news is that once a bike gets over five years old they tend to become easier to locate, as main dealers prefer newer models, so the single cam RT fits the bill nicely. An early RT can be found for under £3,500, but these are often ex-police bikes and some owners avoid them due to their high mileages (typically 50-70,000) and hard use. It is best to pay an extra £500 and aim for a tidy privately owned example with around 40,000 on its clocks, which is fairly easy to locate for between £4,500 and £5,000. If you can save an extra £500, that will get you a tidy 2009 model with a good list of extras, where an early twin cam 2010 bike will set you back £6,500 for a decent specification example. The last of the air-cooled RTs, the 2013 model, can be found for between £7,500 and £8,500. There are a few special edition RT models such as the SE and 90th anniversary, but these are generally just standard RTs with all the boxes on the accessories list ticked. If you want the best accessories on any year of RT, you must be prepared to pay the extra.

www.balderston.net- This Peterborough-based BMW dealer is a family owned and ran affair and offer great service as well as loads of helpful advice and a good range of used models.

https://1200rt.com/- Yes, as you would expect there is a forum dedicated to the R1200RT. This is a good source of advice and the users are pretty friendly and clued up on the RT.