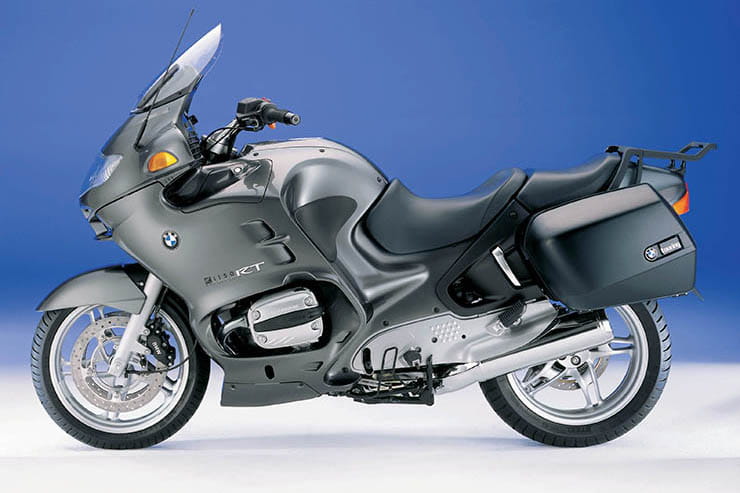 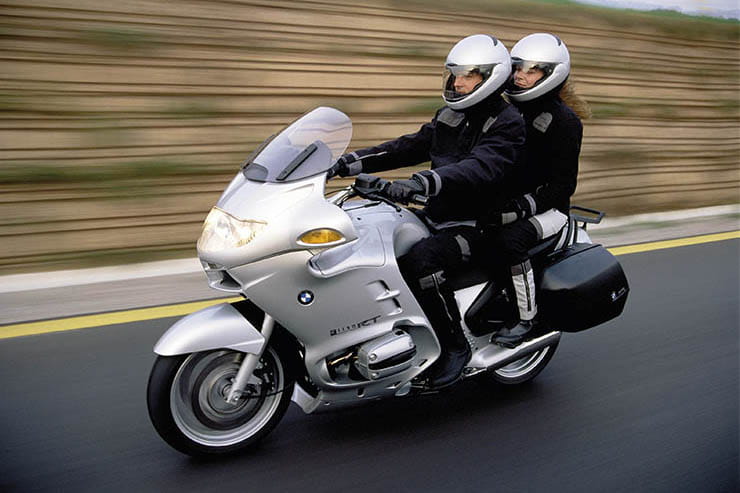 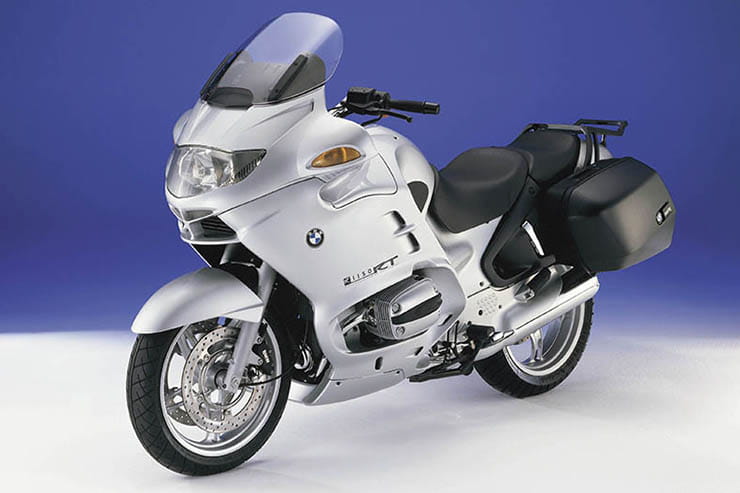 There are a few key boxes to tick when it comes to building a tourer – and the R1150RT manages to ensure that every single one is ticked and double ticked. If you are after a great value way to explore Europe, or even further afield, there are very few better options. Remember, the RT is the bike that BMW built its reputation for churning out metronomically-reliable tourers around…

Powered by an old-school version of the air-cooled boxer motor, in its 1150 guise there is no denying it’s not quite as polished a performer as the upgraded 1200 model and certainly not a patch on the ultra-refined partially water-cooled current generation, but it still delivers exactly what tourers demand. Yes, the gearbox is clunky, but once rolling the boxer delivers strong low-end drive with minimal vibrations that makes motorway cruising a breeze. The RT will sit at 70mph and just devour miles while delivering over 45mpg with ease thanks to an ‘overdrive’ top gear to reduce revs, making a tank range of 250-miles certainly not out of the question when you factor in its huge 25-litre capacity. And thanks to really sorted ergonomics, this is a goal that is well within the rider’s reach.

Designed as a full-dress tourer rather than a sports tourer, the RT has no compromises when it comes to comfort levels or rider protection. The seat is thickly padded for both the rider and pillion while the large front fairing (with an adjustable screen) is extremely effective at keeping the worst of the windblast at bay. Add to this high bars, low pegs and options such as heated grips and you can see why high-mile heroes love the RT. But that’s not its only market.

If you are someone who commutes rather than tours, the RT is also excellent. Loads of luggage capacity and remarkably balanced handling at low speed mean it’s more than up for a bit of urban riding. And don’t be put off by its size, the RT is also pretty adept at filtering with its bars giving you a good guide as to if the panniers will also make it through the gap!

A price tag of £2500 for what is a pretty old bike may seem a little steep, but this isn’t just some old hack. The RT may be getting on for twenty years old, but its reliability, practicality and ability to do just about everything that is asked of it makes it a superb used buy. 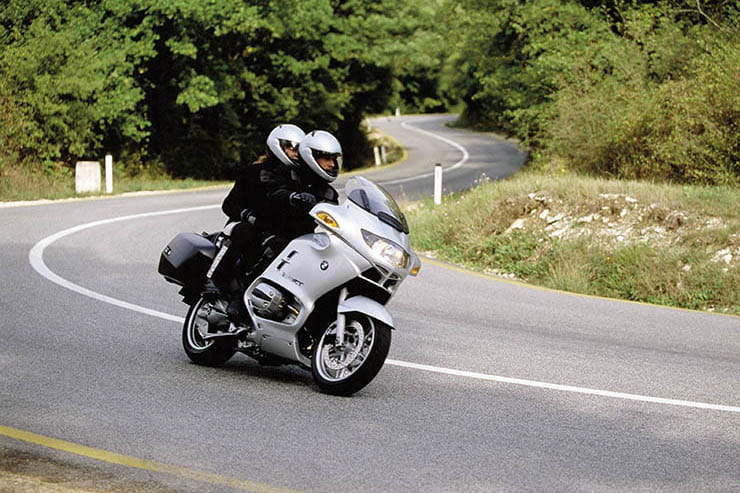 The R1150RT is a very solidly built bike that will keep on going with no major issues. However this ability to soak up the miles is what determines the points to watch out for when buying a used machine as while parts tend not to physically break, they do wear out…

Starting with the motor, your major worry is the clutch as swapping it is a massive headache and a costly repair bill due to the fact you basically have to split the bike in half to gain access to the motor. As a rule of thumb, an RT’s clutch will last about 70,000-miles, however this point can either be extended or reduced depending on its use. The clutch’s slave cylinder is also a weak point with leaks common, so look for any paint flaking off or wetness in this area that hints the cylinder is about to give up the ghost or is leaking fluid. There are a few reports of miss-fires, but this is generally as simple as a duff coil, and be wary of bikes that smoke or rattle as the boxer can drink a bit of oil, meaning big ends can potentially get damaged.

Onto the chassis and give the brakes a good look over as the ABS brake servo can have issues, which is a bit of a pain to get fixed. Check for any ABS warning lights and also ensure the discs aren’t warped and the pads have some meat on them. Thanks to the shaft drive there are no chain and sprockets to inspect, but with the RT on its centre stand give the rear wheel a good wobble and also rotate it while listening out for a grumble that may hint at the shaft’s bearings being worn. It’s not a huge job to get fixed, but the bearings are surprisingly costly. After a test ride, always double check this area for any signs of oil leaking out past the seals, hinting that there are a few issues hidden behind them.

Any warning lights on the dash should be treated with extreme caution as sensors are very pricey while as with all BMW models, buy a bike with all the accessories you want already fitted rather than try and purchase them afterwards. And check the electric screen goes up and down smoothly!

Generally, a well cared for R1150RT is a safe buy, so let service history rather than mileage dictate your final decision. 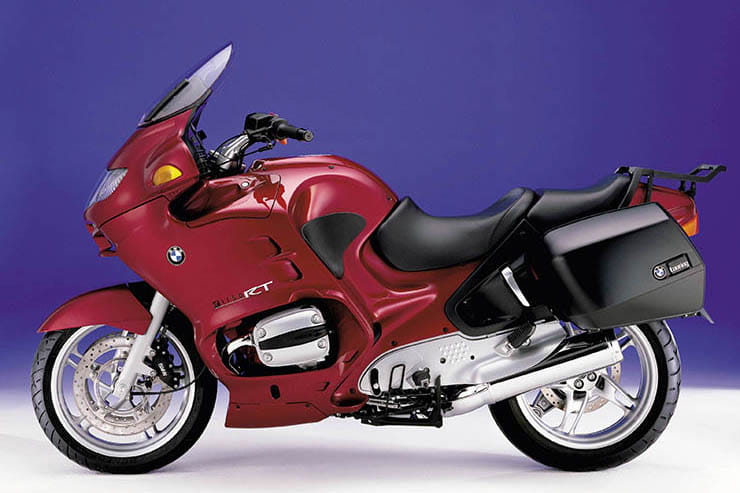 The R1150RT was never substantially updated as it was only in BMW’s model range for four years. In 2005 it was replaced by the R1200RT, which features the updated 1170cc boxer engine that was initially used in the R1200GS alongside more advanced electronics and an upgraded chassis. The R1200RT gained the twin cam boxer motor in 2010 before the partially water-cooled model replaced it in 2014.

A few years ago, when the R1200RT first came out, the R1150RT was quite sought after because old-school touring types didn’t trust the updated BMW’s electronics to get them home. This distrust has long passed and as a result while the RT’s rugged nature means it is a popular used buy, riders don’t batter a dealer’s door down to own one as it is a bit long in the tooth now. Thanks to this you can find a well-ish used (40,000-miles area) early machine for in the region of £2,500 in a private sale, which is where most R1150RTs are sold. A dealer will charge between £3,000 and £3,500, with this rising to the £4,000 area for a later 2004 model. 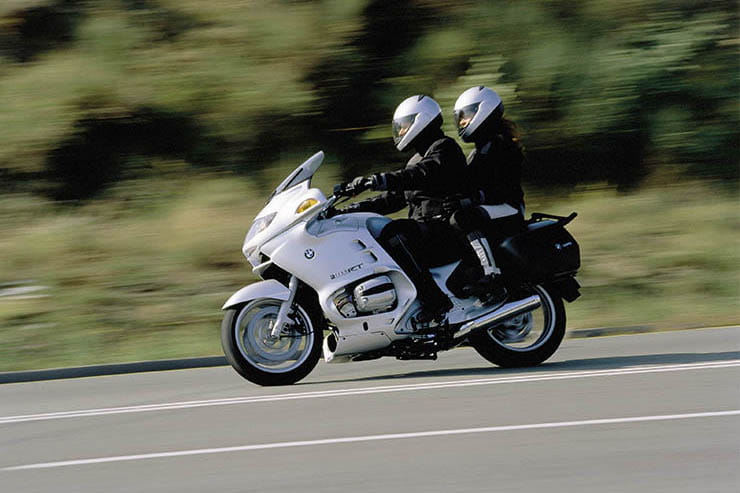 There are a few German RT forums, but as the R1150RT is an older bike you are better off trying to locate a Facebook group than a forum, of which there are a fair few. There is even a Facebook R1150RT Owners Club should you wish to meet similarly minded owners.