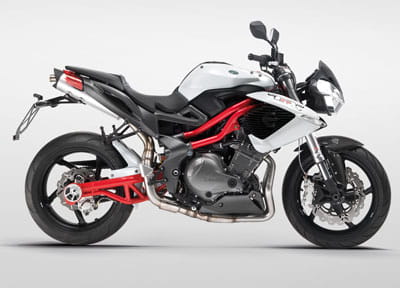 Style-wise, the TNT 899 manages to be different to the mass of naked bikes around it. Its far forward headlight is unusual but no different to Triumph’s Street and Speed Triple dual light offerings. But while the Triumph Speed Triple is sharply dressed, the TNT, especially the underseat exhaust, is definitely looking old-fashioned.

The three-cylinder machine isn’t half bad for delivering respectable grunt from the off and is topped off with a healthy smattering of power. Fuelling can be a little ‘fluffy’ especially when going from a closed throttle to full open at low revs, but it’s very rare you dip into this area. But all is forgiven when the addictive sound of the three-cylinder penetrates helmet and ear plugs – the drone of a triple at full cry is as unmistakeable as the smell of chips and vinegar.

Gearshifts are a lot healthier on the left foot compared to Benellis of old. In fact the engine itself is a lot sweeter than the coarse old 900cc machines that did for Benelli sales what Myxomatosis did for rabbits. On the whole it’s a good engine that is equally happy at being thraped as it is stooging along policed highways. But beware the downside of enjoyment, which is heavy fuel consumption. The worst noted was 31.3mpg compared to ‘normal’ riding where 44.7mpg was the average.

In terms of comfort, it is a definite thumbs up for the TNT. Pegs aren’t high and the bars are nicely placed to keep all shapes and sizes happy. Surprisingly, being as the TNT is born of Italian racing heritage, the seat is a proper comfy perch. Not touring spec, obviously, but it’s fine for 170-mile ride-outs.

Helping to keep the idea of a Benelli purchase on the boil is a chassis that is stiff and delicious when the going gets going. The tubular side sections glued and pinned to stiffening plates is unusual, but gets merit for being so. Suspension is non-adjustable, but Benelli has got it spot on from testing stage to deal with UK roads – must mean Italian roads are worse than the UK’s?

It’s no slug when it comes to cornering. Pull or push on the bars and the TNT rolls over in a neutral, relaxed way. It certainly won’t scare anyone – if anything, it is a tad too stable because faster cornering speeds will see the bike under steer. Not by much, but enough to learn what under steer is when you don’t stay on the line you’re aiming for.

So, the big question: should you buy a Benelli? Can’t say for the other models but the TNT (Tornado Naked Tre) 899 is worth a good look. Reliability issues of old are best forgotten about because the latest tackle appears to be holding up quite nicely. One to chew about is the 899.

+ points – not everybody has one. Styled to be different but it all works.