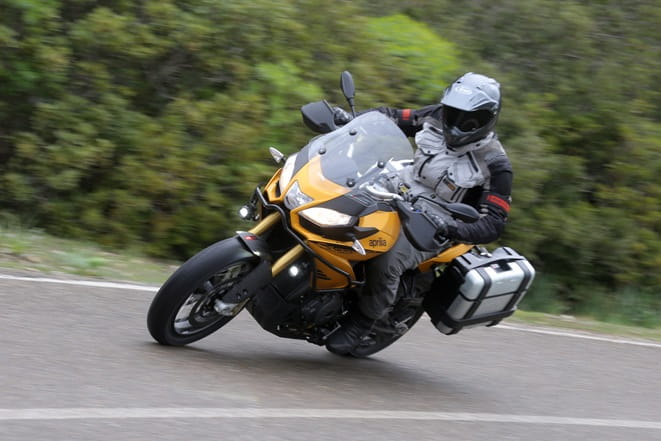 Aprilia’s development team didn’t have to scratch their heads for long when they wanted to find a format for a new, upmarket adventure bike based on the Caponord 1200. Following the original dual-purpose V-twin’s launch two years ago they already had the Travel Pack version of the Capo, incorporating the firm’s first semi-automatic suspension system.

More to the point, in Aprilia’s sister firm Moto Guzzi they had the example of the Stelvio NTX: an upmarket, long-distance oriented adventure bike that is essentially the standard Stelvio with a taller screen, crash protection, accessory lights, wire-spoked wheels and panniers. If you take the 1200 Travel Pack as a base, and kit it out in similar fashion, the result is this: the Caponord 1200 Rally.

Its essentials are carried straight over from the standard Capo. The engine is the 1197cc, dohc eight-valve, liquid-cooled unit that debuted four years ago in the Dorsoduro 1200. Mechanically the 90-degree V-twin is unchanged, as is its max of 125bhp at 8000rpm. 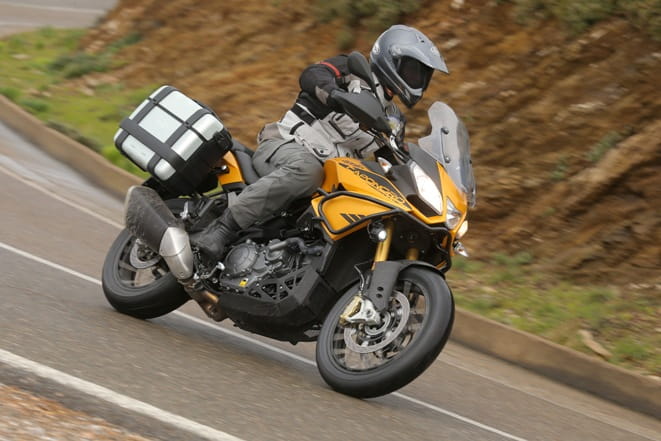 Also retained is the basic chassis layout of aluminium beam and steel tube frame. The Rally incorporates the Sachs semi-active suspension that was the key feature of the Caponord 1200 Travel Pack, which is now the only other model in the family because the standard bike with conventional suspension has been discontinued.

Even so, the transformation wasn’t quite as simple as with the Stelvio NTX, because while they were at it Aprilia’s engineers decided to give the Rally a little extra off-road potential not only by substituting the basic Capo’s cast wheels for wire-spokers but also by enlarging front wheel diameter from 17 to 19 inches. That in turn meant tweaking the steering geometry to retain a similar feel.

Fortunately the V-twin’s chassis was designed for exactly that eventuality, so a new front steel section did the job relatively easily. Not only that, but Aprilia’s semi-active suspension system (which they call ADD, or Aprilia Dynamic Damping) is unique in essentially configuring itself, so required no retuning to suit the changed set-up. 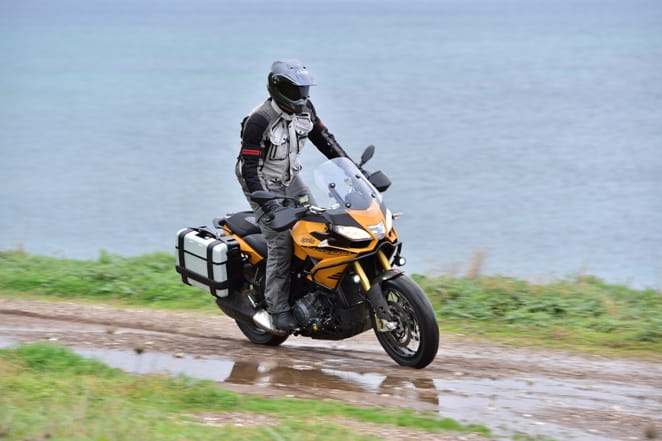 Several of the Rally’s other key features involve protection from weather and damage. There’s the taller screen, which is adjustable in the same way as the standard one, after loosening two screws by hand. And the tubular steel crash-bars and sump protector give a bit of extra strength, though the latter is only made of plastic. The Rally also gets LED accessory lights, aluminium-reinforced panniers similar to the NTX’s, and its traction control system reworked to add an off-road mode.

It’s fun and functional, too, though not without a few drawbacks. The 125bhp engine is as torquey and strong up top as it’s always been; slightly torquier still, in fact, due to a revised exhaust system that is the only powerplant-related change. Throttle response was generally crisp through the range, and was fine in both Street mode and Sport, which gave a slightly sharper acceleration and also more abrupt deceleration on closing the throttle.

Occasionally I was aware of a very slightly rough feel when accelerating from low revs, so the fuelling wasn’t quite 100 per cent, but that didn’t detract from a generally refined feel. On the twisty road that winds along Sardinia’s south coast the Caponord was quick, fun and easy to ride, effortlessly grunting out of bends from 4000rpm or below, and revving through towards that 8000rpm peak-power figure feeling respectably smooth and long-legged.

The engine was equally happy to lope along at lower revs on straighter roads towards the middle of the island, and the Rally felt pleasantly effortless although its wind protection was disappointing. The screen has only an unchanged few centimetres of adjustment, and despite being taller than the standard one it’s still not high enough to divert the wind over the head of even a short rider. Adjusting it did very little to reduce the noise from turbulent wind. 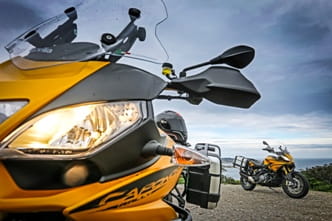 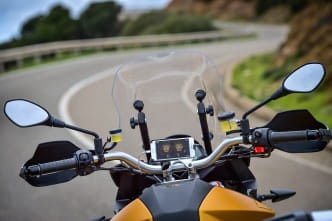 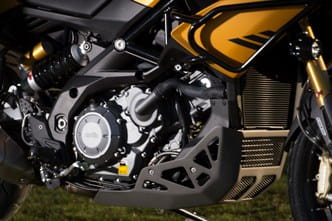 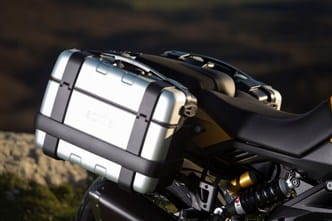 The Rally was effortlessly stable on those straighter roads, and delivered an impressively supple ride thanks to that innovative semi-active suspension. At 238kg dry it’s respectably light for a well-equipped machine, and its relatively low seat (840mm, low by adventure standards!) also helps with manoeuvrability. Handling on the twisty coast road was very good, helped by the ADD system’s ability to add damping to front or rear suspension depending on whether the bike is accelerating or slowing.

The Rally steered pretty well, too, although it felt slightly tall at the front and needed more effort than ideal to push it down into a turn. Adding shock preload, which can be done electronically and is the only possible suspension tuning (there’s an automatic setting plus four manual options to suit load: four (rider, two-up, rider with luggage, two-up with luggage), didn’t make a significant difference. Aprilia might be right in theory with their claim that ADD compensates for riding style so doesn’t require adjustment, but the ability to fine-tune it to suit rider preference would sometimes be useful.

Other chassis aspects were fine, if not exceptional. The Metzeler Tourance tyres gripped the often damp roads well, though an overnight downpour meant the main off-road section was cancelled, so we got only a brief run on a dirt track. With knobblier rubber I’m sure the Capo would have coped just fine.

Its Brembo brakes gave powerful stopping with efficient ABS, although unlike several rivals the Aprilia doesn’t have the latest cornering anti-lock system. The Rally comes with a rather simple but useful cruise control but its electronics package lacks the heated seat, self-cancelling indicators and fuel consumption display of some adventure bikes. Heated grips are a £137.98 option yet confusingly the button alredy exists on the handlebars.

The Rally doesn’t get a huge fuel tank like some long-distance bikes, either, but the Capo’s 24-litre one should be good for an adequate 200 miles or so, at a typical 40mpg. A stop by that distance might be welcome anyway. My back-sideometer was starting to make its presence known before that distance, suggesting that the respectably broad seat is adequately rather than outstandingly comfortable. The panniers aren’t very wide but were certainly useful, and seemed fairly robust.

Ultimately perhaps the Caponord Rally as a whole is a good long-haul adventure bike rather than a great one. I’m not sure that its extra features have given it quite enough to make it stand out against so much strong competition. But at £14,134 – a grand more than the Caponord Travel Pack – it’s not as expensive as some, and provides a good chunk of all-round ability and equipment for the price. 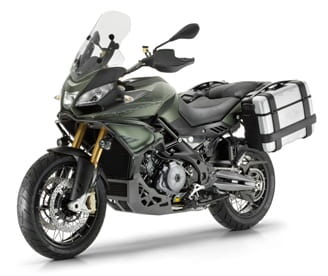 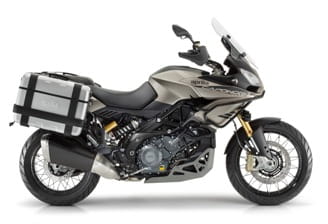