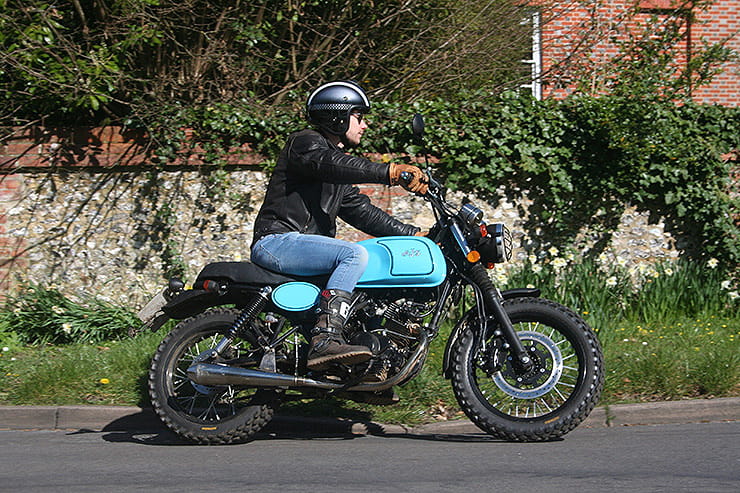 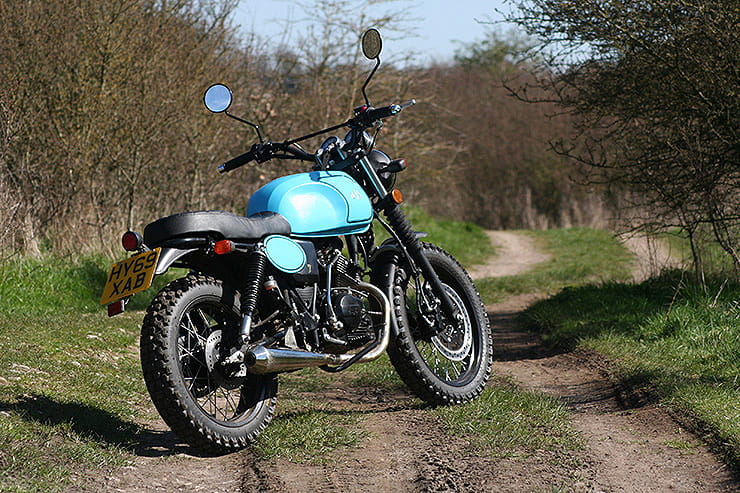 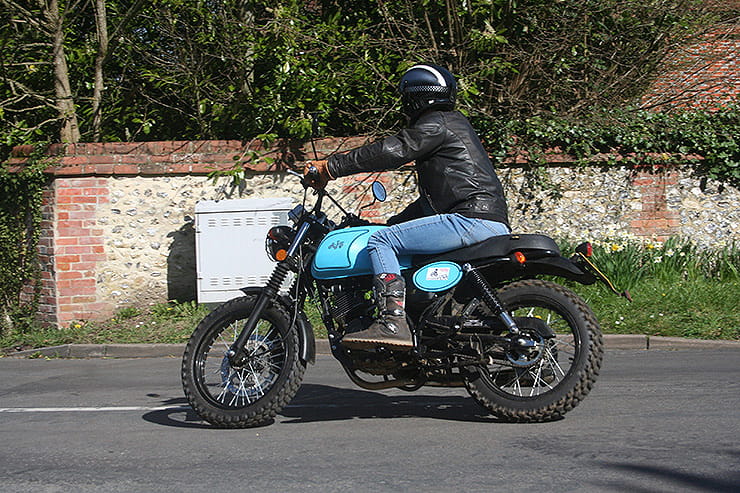 AJS has made a quite success out of sticking its very historic British badge onto Chinese 125s. This might or might not have upset the purists, but the company has been selling British-badged Chinese bikes for over 20 years, which makes it one of the longer-lived importers. And it sells decent numbers into the bargain, usually grabbing third spot in Chinese 125s behind Lexmoto and Sinnis.

Better still, the Tempest Scrambler tested here does go some way to justifying that historic badge, because AJS was famous for the Stormer, a two-stroke motocrosser which was hot stuff in the late 1960s and early '70s. There's a family link too, because 'Fluff' Brown took over AJS Stormer production in the 1970s and his son Nick now runs the company, still offers Stormer spares as well as the 125s, of which the Tempest retro range is the best seller.

The 2020 Scrambler is perfectly placed to take advantage of this knobbly-tyred heritage. It might be based on the standard Tempest roadster, but it comes with all the right street scrambler styling cues: semi-knobbly rubber (with a fat 4.60-section rear), braced bars, racing plates and headlight grille, though it sticks with a low-level exhaust. Otherwise, it looks just the part of a Great Escape in miniature, but does it live up to that in practice?

There's a whole raft of 125cc street scramblers available, and at £2249 the AJS is priced right in the middle of the bunch. The Lexmoto Tempest (yes, same name) and Bullit Bluroc are cheaper (£1800 and £1999 respectively) while the Herald Scrambler costs £2399. The entry-level Mutt 125 is the Mongrel (£2950), its higher price reflecting the fact that it's tweaked in Birmingham with a few British-made parts added. 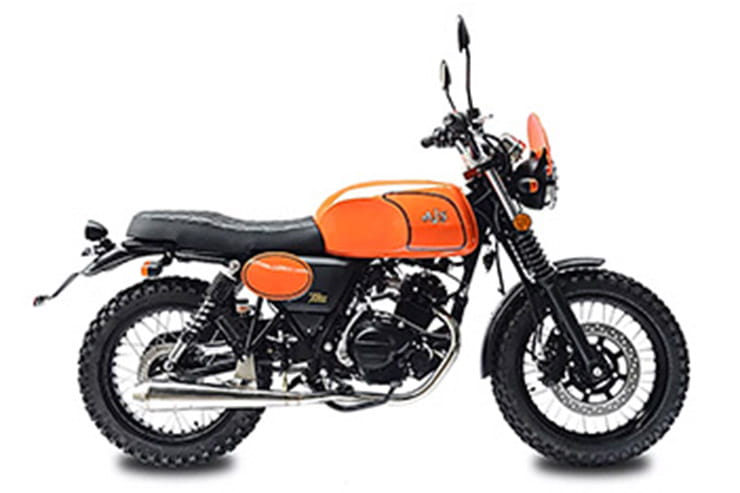 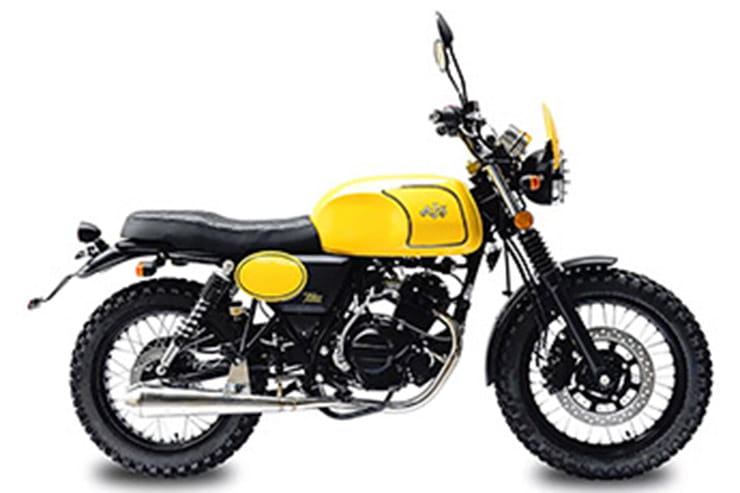 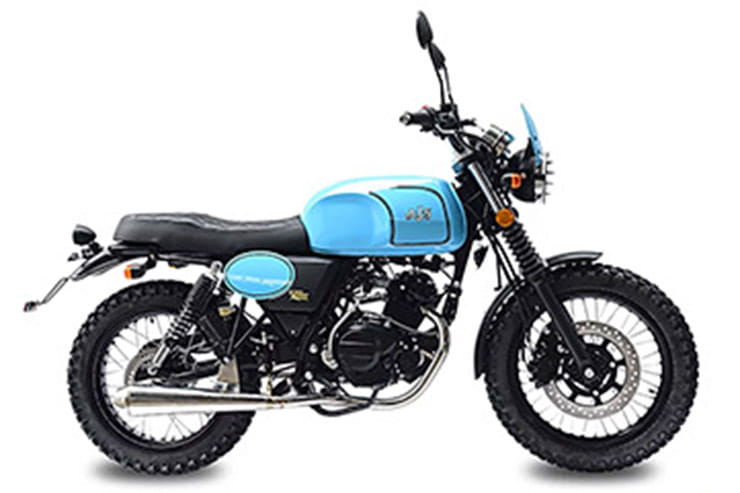 Whichever of these mini scramblers you plump for, you'll get much the same running gear, at the heart of which is a four-stroke single-cylinder 125. Given the millions China has been churning out for over 30 years, this must surely be the most common engine layout on the planet.

Not surprisingly, they all produce 10-12bhp and very similar amounts torque, and once again the AJS is right there amongst them, offering 9.6bhp at 9000 rpm and 7.0lb ft. As ever with 125s, these puny figures can do a surprising amount of work, given that they haven't got a big heavy bike to haul around. Use the Tempest's five-speed box and it goes reasonably well, revving up to the 9000rpm cut-out without serious vibration. Truth be told, it's not much slower changing up at 5-6000, and certainly more restful. Anyway, the result is fast enough for dual-carriageways, able to cruise at an indicated 60-65mph and even touch seventy with the help of a following wind. Mind you, battling back up the A303 against the breeze it struggled to reach sixty, but that's all part of the small bike experience.

It's flexible and quiet in town, something which also applies off-road. You'll be pleased to know that the Scrambler's ruff-tuff looks aren't just for show, and it will happily tackle easy green lanes, with plenty of ground clearance, and standing up on the serrated pegs it all felt in its element. What it doesn't have is the long-travel, well controlled suspension of a modern trail bike. Mind you, the thing sounds so inoffensive you shouldn't upset anyone – sure enough, a dog walker smiled good morning as I pobbled quietly past.

No surprises here. Like just about all Chinese 125s, the Tempest's motor is derived from Japanese technology (Yamaha in this case) stretching back many years – in other words, it's a simple air-cooled two-valve single with a single overhead cam. Like the rest of them, this one has no clever riding modes, no variable valve timing or other trickery, though they all feature fuel injection now to cut down emissions, and there is a balance shaft, which shows up in the lack of vibes. The five-speed box isn't quite as slick as on the newer Isaba from AJS, but it works well enough, and the exhaust is in stainless steel, which is a nice touch at this price. 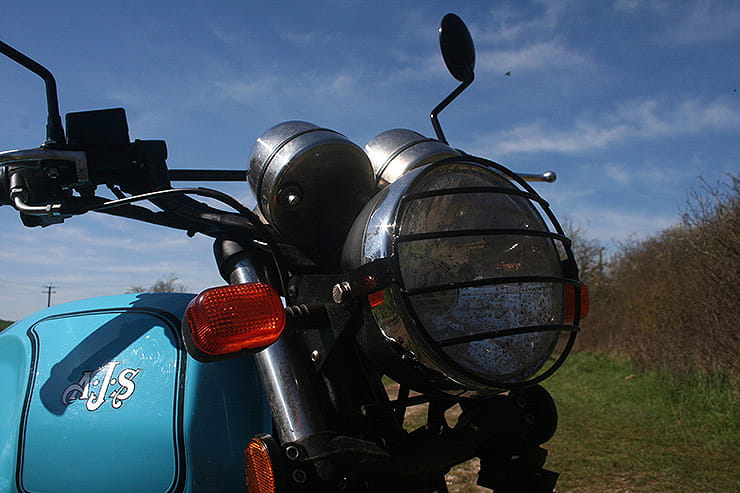 The coming of Covid-19 meant I didn't have time to do a proper fuel consumption test on the Tempest, but there's no reason to suppose it won't manage the usual geared 125 average of 90mpg or more. Hard riding will result in less, but treat it gently (and on quiet roads this can be done) and you can expect over 100mpg. The tank holds a useful 16 litres, so a range of over 300 miles should give plenty of commuting on a single tankful. Unless your commute is insanely long, obviously.

Climb aboard the Tempest for the first time, and it just feels right, with a neutral riding position and nice balance. At just 124kg it's a real lightweight so it's very easy to throw around as well. The Kenda tyres are far more knobbly than usual dual-purpose rubber, which should be useful when the off-road going gets sticky, but they are a bit squirmy on dry tarmac, and the fat 4.10 front tyre is slower steering than a skinnier item. But of course, they look fantastic.  The suspension (non-adjustable forks and twin pre-load adjustable shocks) is fairly basic and soft on standard settings but unless you're planning to do lots of two-up riding or get serious off-road, it's good enough.

You get linked brakes on this non-ABS 125 and the Tempest's set up works really well. The pedal operates a mix of front and rear discs, nice and progressively with plenty of power. Some linked systems don't allow a really gentle application at walking pace, but this one was fine. 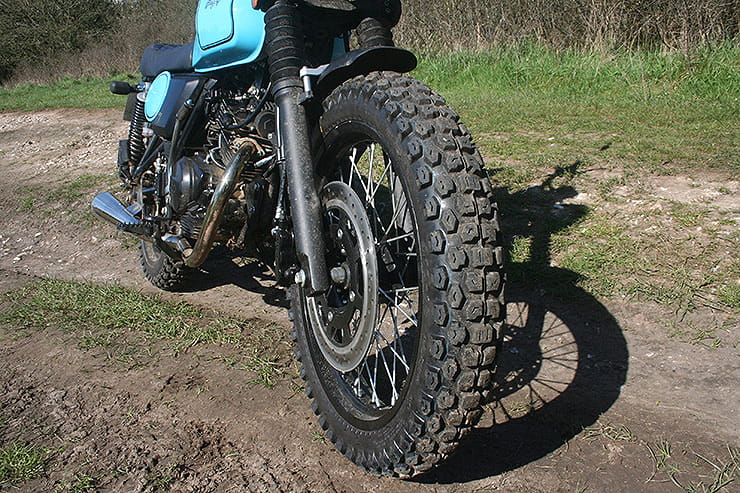 No, I wouldn't tour on one of these either, but comfort does still count. The quilted seat, which so looks the part, is pretty hard, partly made up for by the soft suspension. The good news is that the upright riding position feels natural all the time – you might be a bit in the wind at 60mph, but otherwise there's no pressure. In fact, having said I'd never tour on a Tempest, I can imagine a lovely trip across Britain on one of these, using a mix of B roads and green lanes – keep the mileage down, and I reckon one could do that all day. The seat is a low 780mm, so the short-legged (which includes me) will be happy.

Rider aids? In the modern sense, none at all, unless you count the centre stand, which makes chain lubing and cleaning a tad easier. The Tempest is really an old-tech 125 with its twin shocks and non-LED headlight. Even the instruments are straight out of the 1970s, showing speed, revs and a mileometer and, err, that's it. As for accessories, AJS does offer a set of engine protection bars (British made, no less) for £89.99. 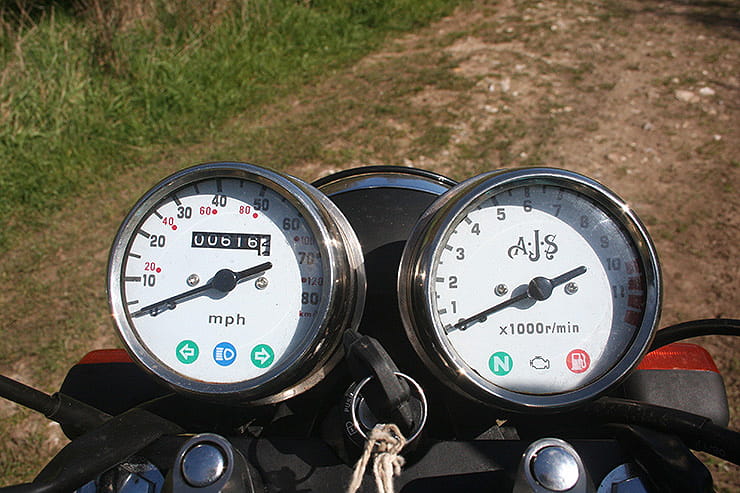 I really liked the Tempest Scrambler. All right, it is a bit low tech and basic, but it's got a laidback feel to it that's missing in some 125s. It's fast enough to use dual-carriageways and can handle green lanes. Plus of course, it really looks the part of a '70s street scrambler – you too can jump the wire...

Three things I loved about the 2020 AJS Tempest Scrambler…