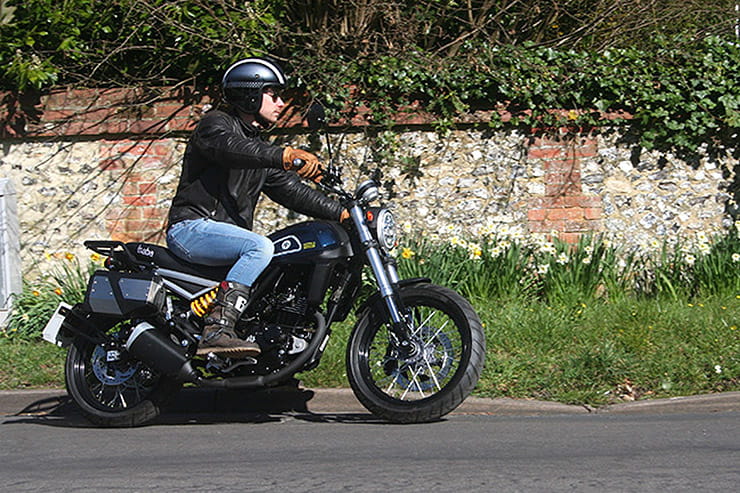 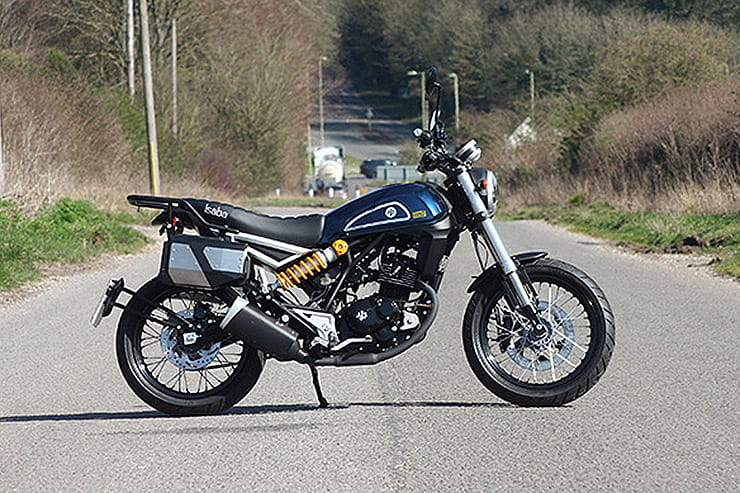 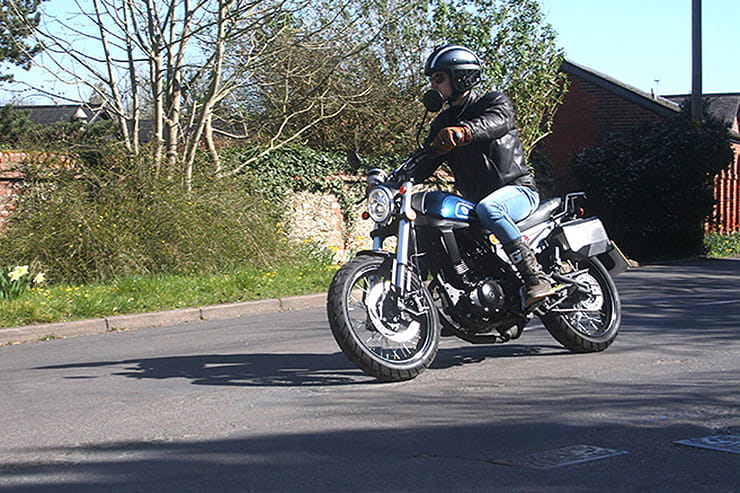 AJS is a name from the glory days of the British bike industry, with roots stretching back to before the First World War, but this latest bike to wear the badge is very 21st century. Described by AJS as an 'Adventure Scrambler', the Isaba is like no other 125 currently on sale. It's clearly not a retro street scrambler of the type already offered by AJS. Nor is it a traditional adventure bike like the Sinnis Terrain or a more basic roadster.

The Isaba is funkier than any of those, a sort of flash urban 125 which should appeal to younger riders. With USD forks, an exposed rear shock and small digital instrument pack, it's far from the retro look which appeals to born again bikers, but as the industry well knows, it's the under-25s we need to recruit. And for those who don't fancy the endless variations on retro scramblers and cafe racers, the Isaba could be worth like. Of course, mechanically, it's little different from most 125s out there, but that's the way of the A1 market.

A brand new Isaba will cost £2459, which puts it midway between Lexmoto (invariably the cheapest) and pricier brands such as FB Mondial and any of the big four. Lexmoto's offering is the Viper, which is over £500 cheaper at £1900, again with USD forks and a nod to street scrambler styling. That one is certainly flash (or garish, depending on what floats your boat) making the Isaba look positively understated.

The Isaba is available in Matt Black, Metallic Blue or Silver. 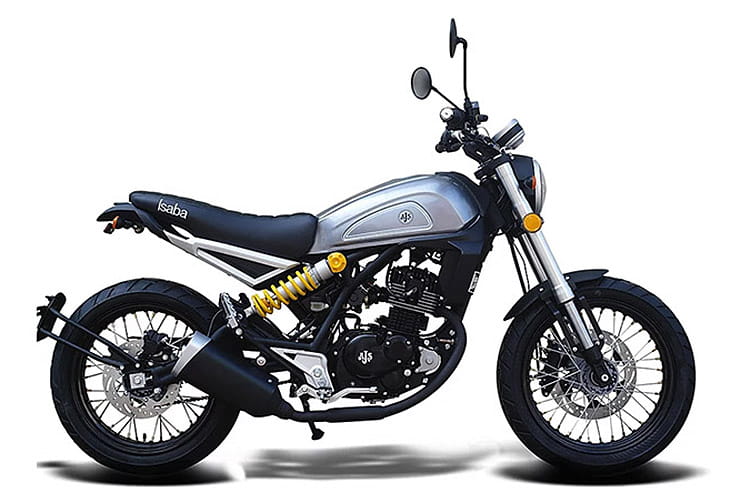 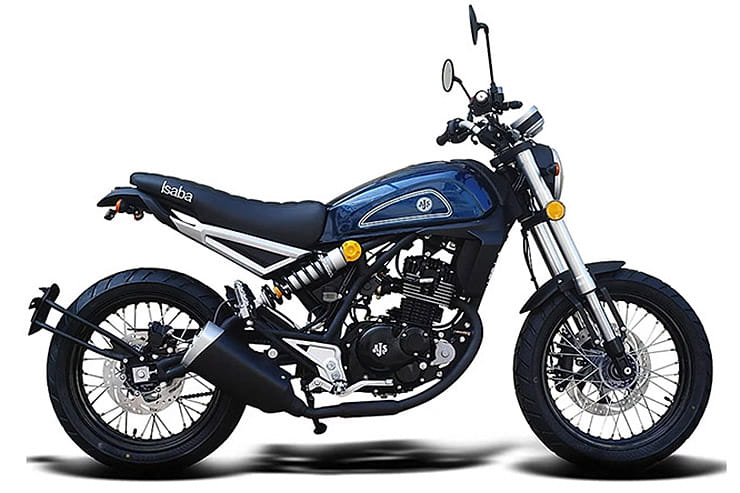 Not many 125s produce the maximum 15.5bhp allowed under A1 licence rules, and with 10.4bhp at 9500rpm, the Isaba is about average though a Viper manages an extra horsepower as well as slightly more torque – 7.0lb ft against 6.4lb ft. On paper, this all looks a bit feeble, especially if you're used to bigger bikes, but like most 125s the Isaba doesn't weigh that much at 136kg. It's also very low geared even by 125cc standards, the little motor spinning over at around 6000rpm at 40mph.

The upside is reasonably brisk acceleration up to 50mph or so, certainly enough to keep up with urban traffic. And a nice side effect is that you can pull away from 30 limits in top gear – most 125s need to change down a gear or two to get the same effect, but not this one.

When in town, the Isaba will trundle along in top at 25mph and down to 20 in fourth.

If there's a downside to these short legs, it's that top speed is limited to an indicated 60mph on the flat, though you will get a few more miles per hour by getting into a crouch and/or heading downhill. Not only that, but the motor feels and sounds quite busy even when cruising around, and quite harsh, with tingling vibes coming through the seat while the mirrors turn following traffic into a blur. If the gearing sounds like putting you off, don't forget any good dealer should be able to fit bigger/smaller sprockets to fix it. You'd lose some acceleration but then gearing, like most things in life, is a compromise. 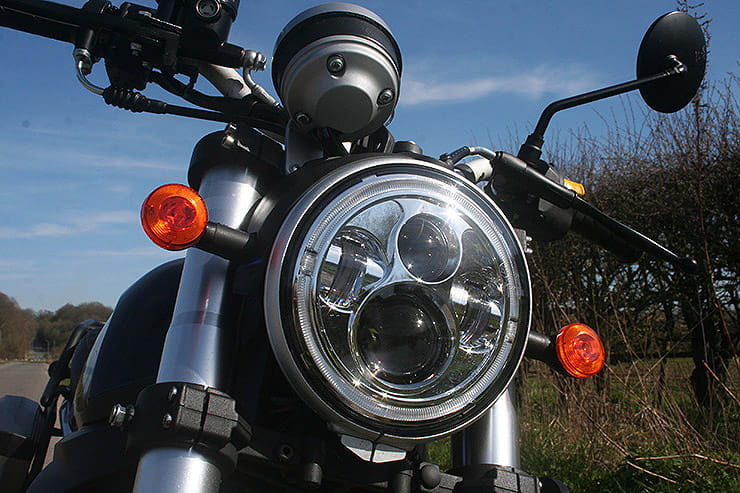 Look closely at any of the Chinese-made 125s and you'll find a simple air-cooled motor, with two valves and a single overhead cam. The Isaba is no different, based on technology that has been around for over 30 years, except for fuel injection, adopted by all 125s since the Euro 4 emissions limits arrived in 2017. That's backed up by a five-speed box with a good positive change and a light clutch. The exhaust is a bit of a styling feature and the noise it makes is fairly inoffensive – for those who want to make more of an aural statement, aftermarket pipes should be along fairly soon.

Now according to the Isaba's official paperwork, it should return 104mpg. I can't tell you how accurate this is because I didn't have time to do a proper consumption test, but geared 125s can usually average over 90mpg, with over 100 possible given steadier riding. The Isaba's tank holds 13 litres, which is less than some, but still amounts to well over 200 miles at 90mpg. For commuting and round town, it's plenty. 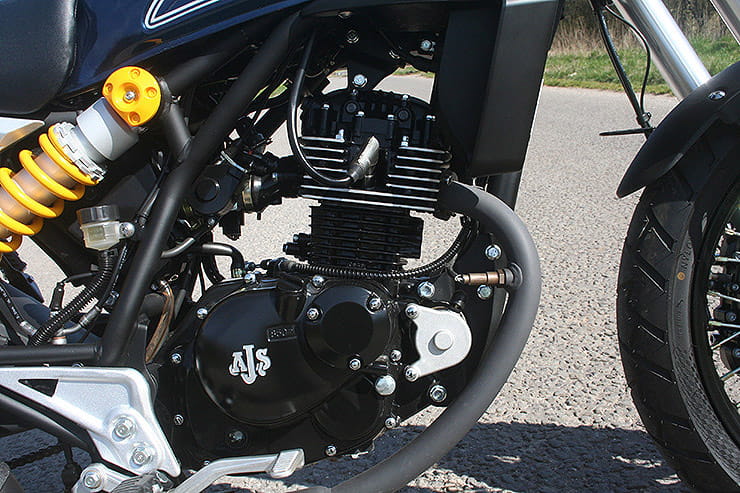 Those flash USD forks and the look-at-me nitrogen rear shock promise much – the good news is that they deliver. Suspension at both ends feels resilient and well damped, making the bike feel quite taut on the twisty stuff. And being so exposed, the shock's pre-load is very easy to tweak. The Timsun tyres back that up with decent grip, at least in the dry, and the whole thing feels solid and well tied together. As mentioned, weight is moderate and the widish bars make the Isaba easy to tip into corners. In town, it's a slim little bike which is dead easy to filter, so all round it's all good news.

Buy a 125 without ABS (which is most of them) and you get a linked braking system as required by Euro 4. The Isaba is no different, with the brake pedal applying a balance of front and rear disc, and the lever operating the front only. It's a good system which works well, with nice progression and no sign of early lock ups.

Is anyone likely to buy an Isaba for touring? It's pretty unlikely (though some riders are doing big trips on 125s these days) but for longer hops beyond city limits it does have a nice, neutral, upright riding position to those wide bars, and the seat is a low 760mm allowing me (30in legs) to keep one foot flat on the tarmac. The seat's comfy too, so it's just a pity about the buzziness which works its way through. 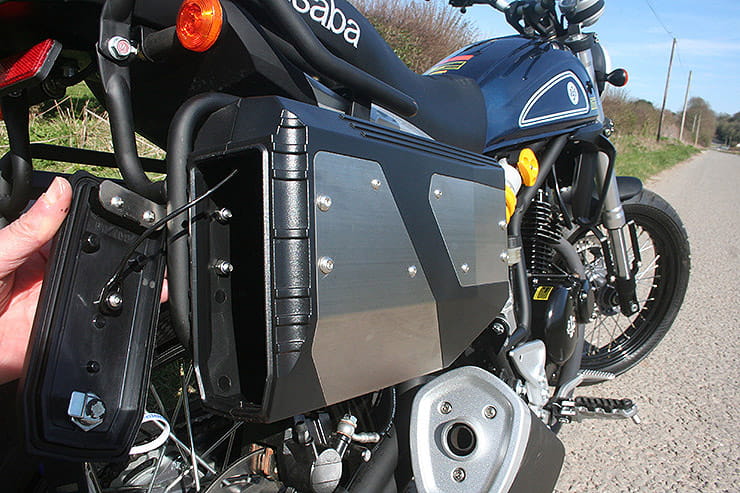 The Isaba's digital instrument panel is on the bijou side, but they have packed in a lot of information – as well as speed, there's a tiny rev counter around its radius (too small to be much use, to be honest), fuel gauge, voltmeter, gear position and clock. As for accessories, pride of place must go to the luggage set, which comprises two tiny panniers and a rack which would take a small topbox. Now, they say that size isn't everything, but with panniers it counts. The Isaba's are not much more than sandwich-sized, with access via a cubbyhole rather than a proper lid. Still, they are better than no luggage, look pretty cool and cost just £147 extra.

The Isaba is different from other 125s, at least in its styling. It's not a retro street scrambler, cafe racer or roadster, and behind the understated looks is a very competent little bike, good to ride and easy around town. The low gearing is a drawback out of town, but if the individualism of the bike appeals, go for it. 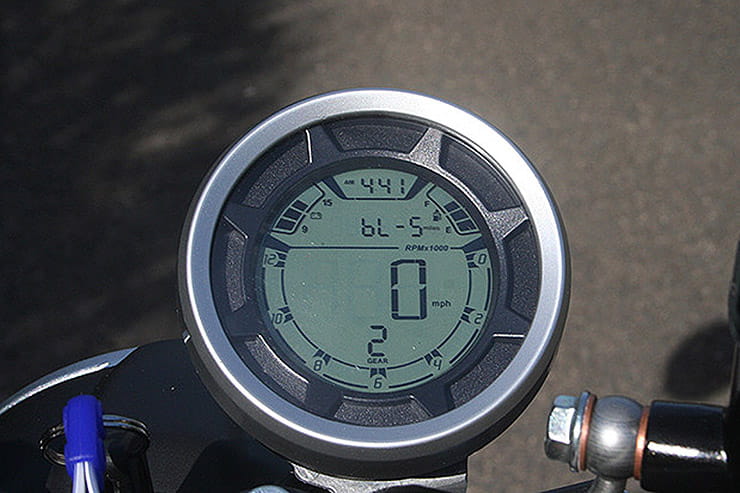