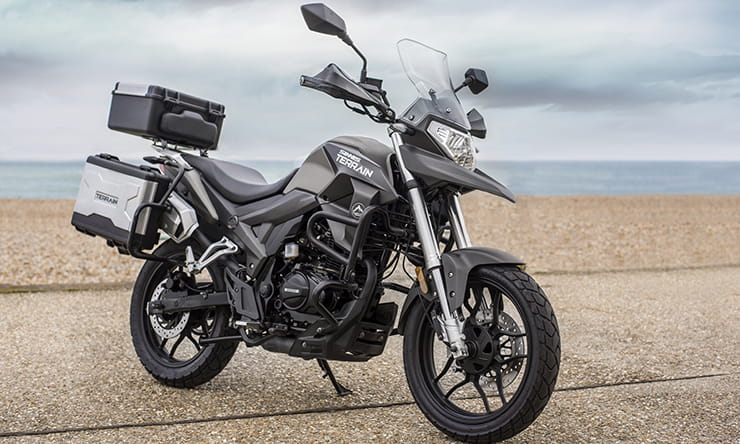 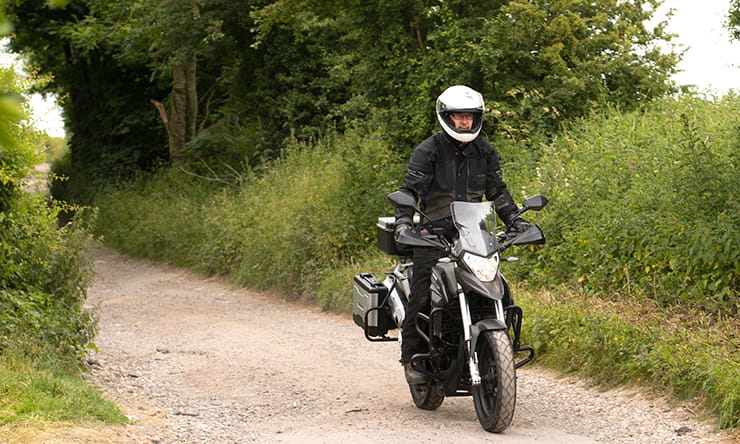 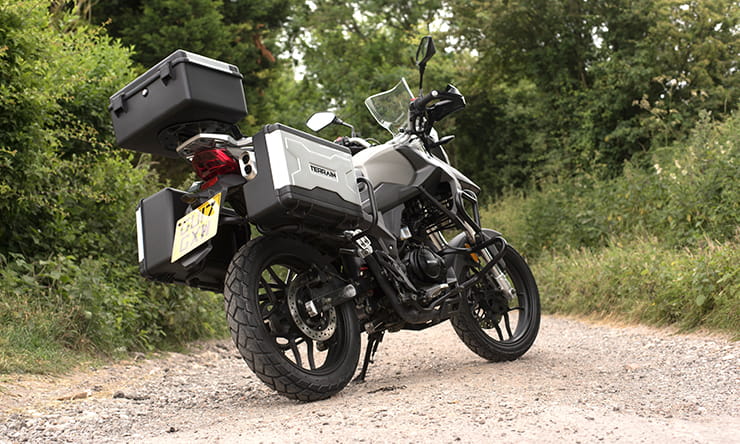 Adventure bikes don't have to be big – that's the message of various overland travellers doing big trips on small bikes, not to mention machines like  the V-Strom 250 and BMW G310GS...but a 125? The big surprise is the Sinnis Terrain, puny-powered though it is, does make sense as an adaptable little tourer, and it's cheap. 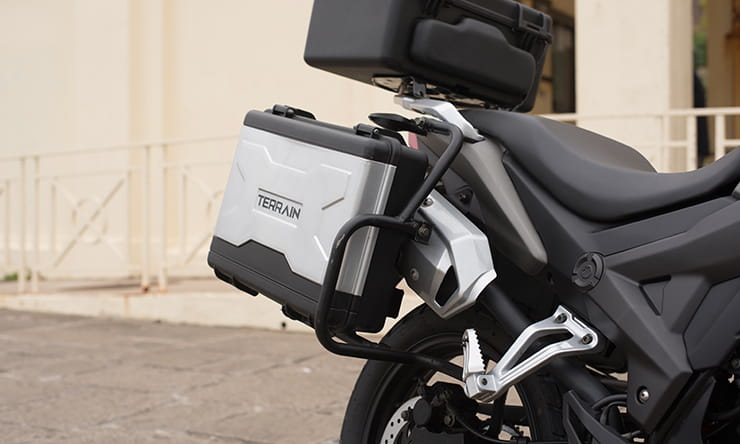 Did we say cheap? At £2499 with a full set of luggage (admittedly small luggage) the Terrain is positively bargain basement. It's half the price of a G310 GS, and really there's nothing comparable, with no other 125cc adventure bikes available. With the adventure segment still thriving it's no surprise that the Terrain is now Sinnis' best seller.

There's a problem with all of this. The Terrain's output of 11.5bhp is actually quite respectable by Chinese 125 standards, but the trouble is, there's an awful lot of extra kit it has to push along. The bike weighs 150kg, which for a 125 is porkier than a pie factory. Around town and on small roads, it's all very pleasant, happy to trundle along at 20-25mph in top gear and accelerating reasonably snappily up to 40-45mph. But out on the open road, that weight soon begins to tell – the Terrain just managed to hold 55mph into a headwind on the A23, but only just. It hit an indicated seventy downhill, but soon lost it going up the other side – in short, there's no power in reserve. Fine for riding your own pace on quiet roads, but keep off motorways.

The Terrain's mechanical bits make no concession to its adventure aspirations. Tucked away behind the beefy crashbars is a standard little two-valve 125cc single derived from the old Suzuki GS motor and now with the fuel injection that all 125s must fit. The good news is this puts it well within the A1 category. At this price, you don't get a six-speed gearbox – five's enough anyway. 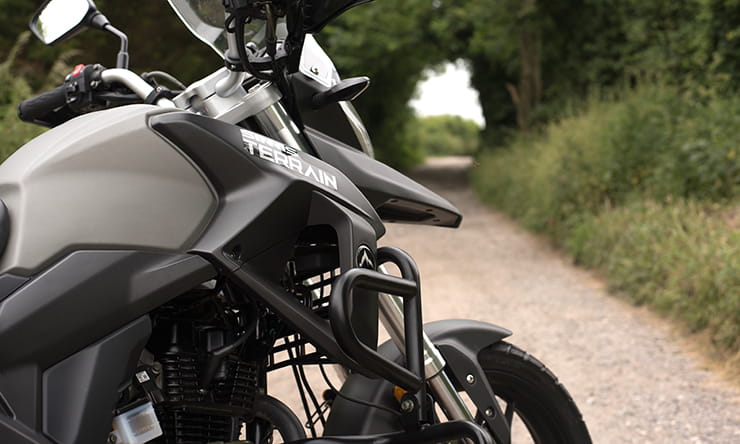 Geared 125s may not be fast, but they certainly are frugal – we've heard of one Terrain owner averaging 118mpg. Match that, and the big 14-litre tank should allow a theoretical range of 300 miles. Handy for crossing Tibet, then.

The Terrain might be heavy for a 125 but by absolute standards it's still a lightweight, so it's less intimidating to hop on and ride than a big adventure bike. Continuing the theme, the 800mm seat enabled me (30-inch legs) to get one foot flat on the floor, so that's another bonus. The suspension is quite soft and long travel, which doesn't hurt the handling, and the Terrain can be hustled along twisty tarmac pretty well, the wide bars allowing for easy steering input. I didn't venture further off-road than an easy gravel track but the bike felt perfectly at home. 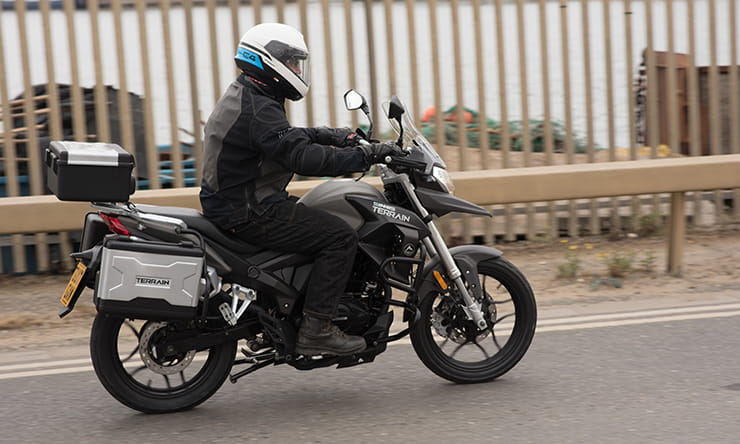 Linked brakes (compulsory on all 125s without ABS from last year) means both front and rear discs are operated by the pedal, while the lever works the front disc only. It's not a perfect system, needing a hard push on the pedal to get a hard stop, and I found myself using the lever as well for extra stopping power. The other disadvantage of linked brakes is that you can't feather the rear on its own, which is useful very low speeds on road or off. But for novice riders, it saves the bother of balancing front/rear brakes, and there was no premature locking.

This is where the Terrain scores. It's got a big bike feel, thanks to all the extra bodywork, the screen and wide bars. That's backed up with a comfy seat and that pliant suspension gives a good ride, while the screen keeps the wind off well. After the testing day, I was faced with a 140-mile ride home, and would have happily done it on the Terrain – you can't say that about many 125s.  I can't speak for pillion comfort, but passengers do get a biggish portion of seat and a grab rail. One serious omission (presumably to cut costs) is that there's no pre-load adjustment for the rear shock, only rebound damping. 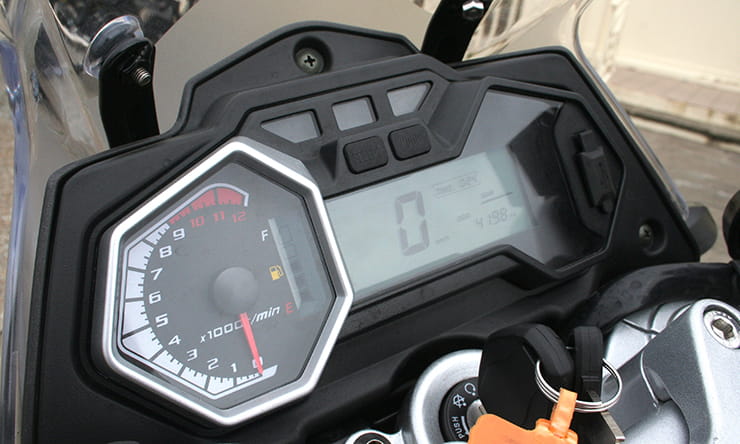 Test ride a 125, and sometimes it's a struggle to list the equipment, as they often don't have very much. Not so with the Terrain. The three-piece luggage is the obvious place to start, though look more closely and the aluminium-look boxes are actually plastic. They're also small, at 24 litres for the left pannier, 18.5 for the right, but there is an optional bigger topbox big enough to take a full-face lid. Other notable bits of kit are the substantial looking crashbars front and rear, the screen, plus a dash with includes a rev counter, clock and USB socket. For the price, you get a lot of stuff.

Well, it's bang on, isn't it? Whether you think the Terrain is faking it or not, there's no denying it looks convincingly much bigger than it really is. All the adventure bike styling cues are there, right down to the front end beak, the hand guards and serrated footpegs, backed up by blocky adventure type tyres.

So, charlatan or eco-adventurer? The Terrain is certainly slow, two-up touring would be near impossible and the luggage is not what it seems. But it's very comfy, feels like a much bigger bike, and as long you stick to small roads makes a credible small tourer.

Three things I loved about the Sinnis Terrain…

• No pre-load adjustment for rear shock