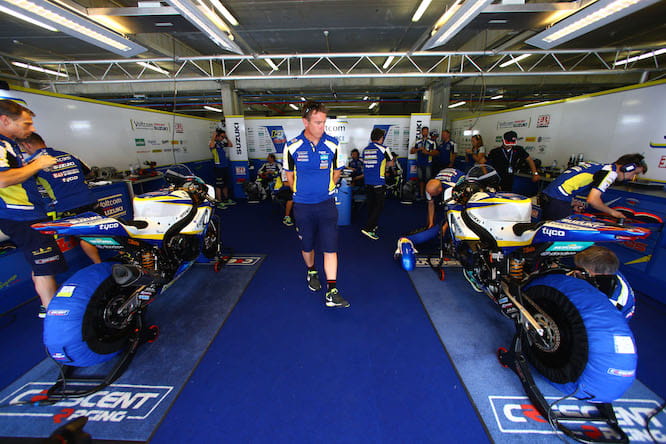 Crescent Racing could be poised to switch manufacturer for the 2016 Superbike World Championship running Yamaha’s all-new YZF-R1 on the world stage for the first time.

The move comes after months of speculation over who would bag the 2016 Yamaha deal, with various teams including Milwaukee Yamaha, YART and the Yamaha IDM squad in the frame.

Crescent have faced a tough few years since making their World Superbike debut with Suzuki’s GSX-R1000 in 2012 and with no model upgrade since then, their task has only become harder.

Suzuki is tipped to be bringing out a new bike next year but sources claim it won’t be ready until at least mid-season.

Having undergone a year of race development across various national championships, Yamaha’s R1 is an enticing prospect for anyone looking to take on a new bike. It’s already taken victories in Britain, America and Germany not to mention the historic win in the Suzuka 8 Hour last week.

Rumours are rife in regards to who could ride for the squad. Marco Melandri has been heavily linked to a Yamaha World Superbike seat since his Aprilia departure, as has Sylvain Guintoli who is thought to be unhappy at Honda.

With PATA tipped as a sponsor for the new Yamaha team, both Melandri and Guintoli would make sense. Melandri is Italian, which would work well with an Italian sponsor while Guintoli has a long history with the PATA chips brand.

Other riders in the frame include Josh Brookes, who rode for Paul Denning’s squad at Phillip Island a couple of years ago, and current Crescent Suzuki rider Alex Lowes.