BSB | Josh Brookes: “I need to take a leaf out of Redding’s book” 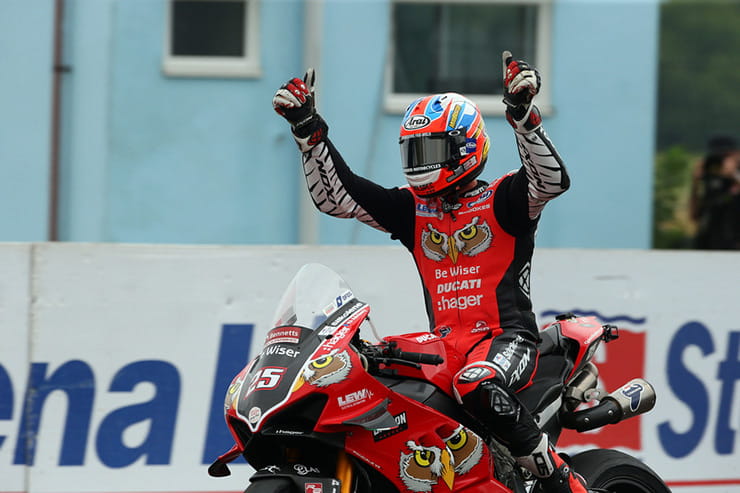 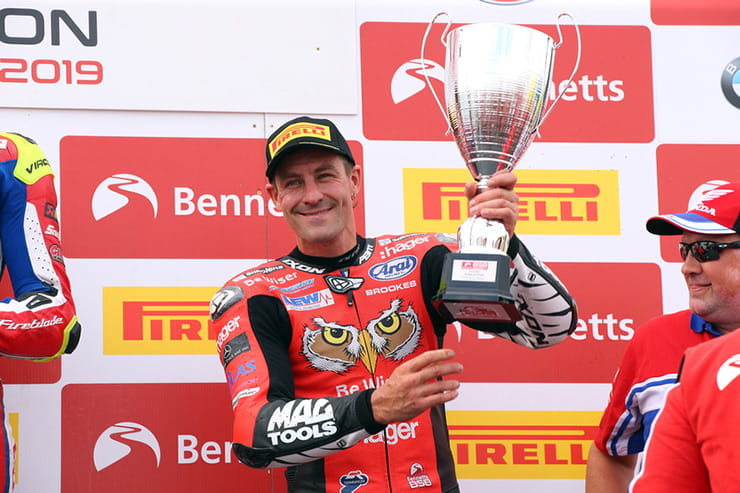 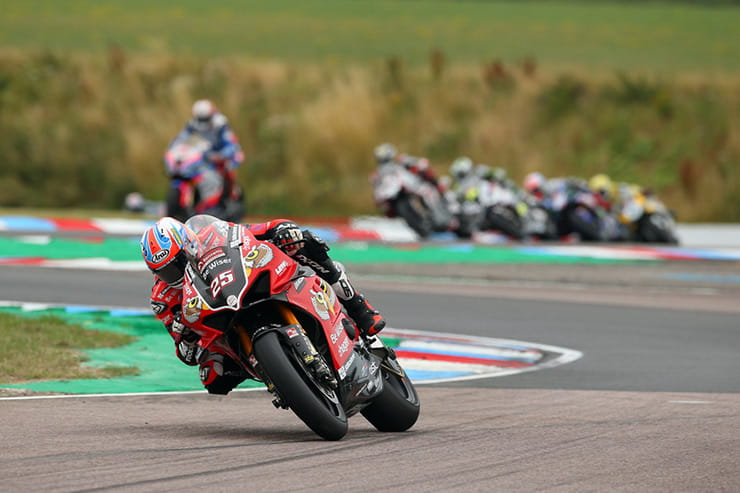 PBM Be Wiser Ducati’s Josh Brookes admitted he doesn’t feel himself after he battled tyre wear issues all weekend long at Thruxton, but Brookes still returned to the top step of the podium in the second race and now sits just 20 points behind his team-mate, Scott Redding, at the top of the standings.

Thruxton is one of Bookes’ favourite tracks on the calendar, and with its high-speed nature all riders were forced in to working on tyre life strategies all weekend.

However, the tricky surface in Hampshire always throws up a challenge for all of the riders on the Bennetts British Superbike grid, and it was Brookes along with Honda Racing’s Andrew Irwin who walked away with the victories.

The Australian took the spoils after two stoppages to the second encounter, with the final re-run over eight laps. Brookes pushed hard from the opening lap showing the devoted crowd exactly what he could do.

But afterwards the 36-year-old told BikeSocial that he didn’t feel himself all weekend long, but he was pleased to walk away with third and a victory, his first since Brands Hatch back in June. 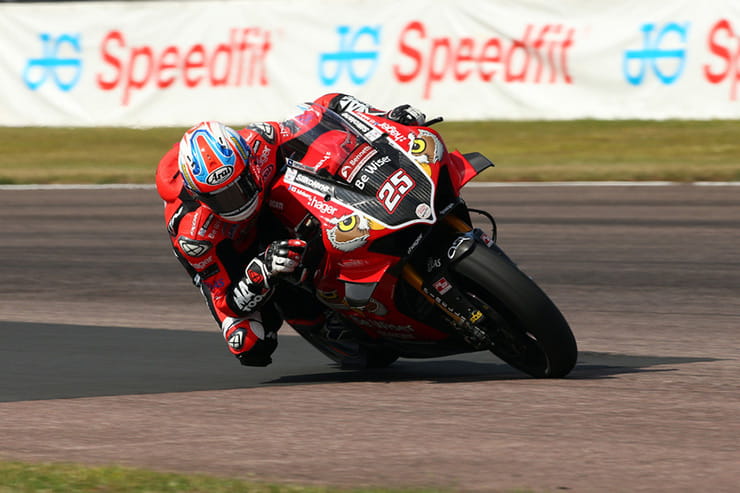 Above: Brookes struggled with edge grip all weekend

"I wanting to ride as hard as I could all weekend,” admitted Brookes after the second race following the press conference.

“I felt like I had to compromise at the weekend and it's been quite frustrating, I just don't feel like I've been myself.

“Then, for race two all that went out the window because the race was shortened, first of all to 13 laps, and I lead that bit but I was still on the side of caution with the tyre.

“Then when it went to eight laps, I just thought you know what, stuff it, I gave it everything. The tyre is always going to last eight laps, be as brutal as you want to be with the throttle and it will still last.

“So, that was fun, I could ride how I wanted to ride and I didn't feel compromised.”

Brookes had struggled for most of the weekend, not topping a practice session and qualifying on Saturday in fourth, but his race pace over 20 laps was something to be admired.

The opening race saw Brookes as far down as tenth, but his timing was perfect as he battled for the lead with Irwin and Redding. 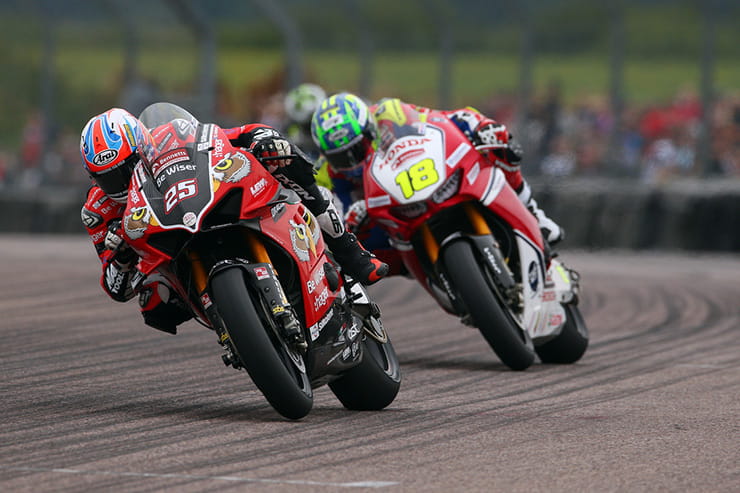 Above: Brookes battling with Irwin in race one

However, after hard moves in to the last chicane the Bringelly man was forced back to third, and he expressed that he felt he did a good job at timing his run for the lead.

"It is a double edged sword though because sometimes that compromise is what gives me the advantage to win here, when it is a full race distance I've kind of been quite good at timing it, and even in race one I think I did a good job at timing it.

“I got a bit beat-up mid race, and lost some time. Apart from Scott dive bombing on the last lap, I think I was in a good position to challenge for the win.

"I think I'm still riding and making good choices, but generally something with bike set up or something in that nature stopped me from having the edge grip that I was looking for to make that last full race distance.

“Once it went down to the short race I could race how I wanted, and not have to think about it.

"I was tenth at one point in race one, I got a bad start, I was boxed in at the second corner and then Vickers nearly crashed and I got pushed wide so Buchan got past me and then Luke Mossey got by as well, so I started to get further and further back.

“It's good racing and its enjoyable and fun but when you can see the leaders getting further away and you're dropping back it's frustrating.

“Even when I did start to move forward they'd attack back again immediately, which is what they've got to do, they're fighting for their positions and everybody is deserving of their courage and effort. 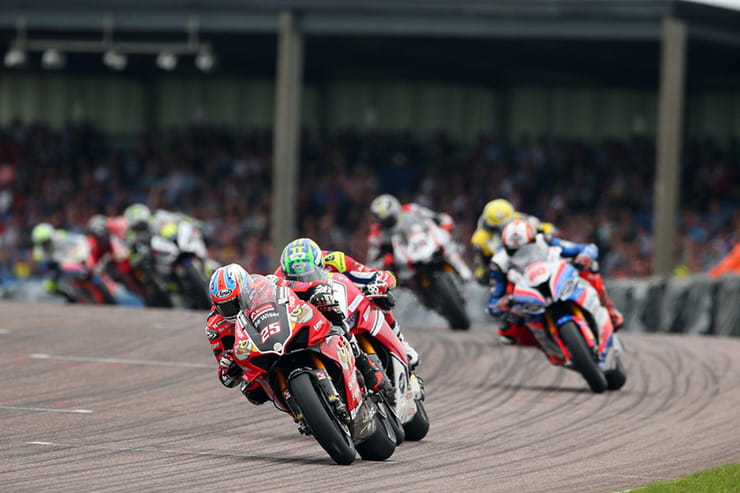 Above: Even with edge grip issues Brookes still found a way to win

“I don't criticise what they do but it affected my race, so I got frustrated not being able to move forward.

Teammate Redding has been the stronger of the pair out of the Be Wiser Ducati camp in 2019, leading the way in the standings and podium credits in the debut season in the class.

But Brookes admitted that he has a lot of admiration for what Redding is doing in 2019, but added it was finally nice to get one back over the former MotoGP star.

"I can't criticise him, he's riding well and riding on the same machine and getting better results so you know, that’s a credit to him but it is a bitter pill to swallow every weekend.

“Well, it hasn't been every weekend, but the last few he's shown the upper edge. To finally get one back and get a win is great!”

Pirelli, the sole tyre manufacture in the Bennetts British Superbike Championship has changed its construction of the rear tyres for 2019, which has seen some riders struggle to make their machines work as well as they have done in previous seasons.

But Brookes explained that he is struggling with edge grip when he is racing on the side of the tyre, admitting that he and his team still have plenty more work to do if he is to go on and win the series. 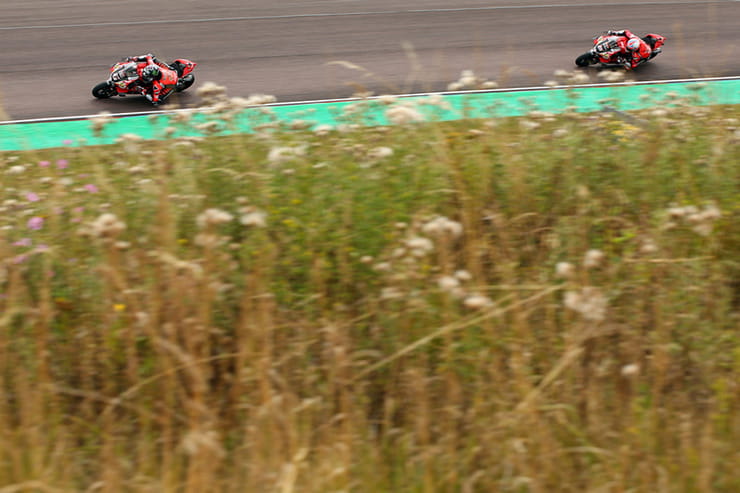 Above: Brookes is just six podium credits behind his teammate

"The tyres changed in recent years, Pirelli have made a tyre that is more durable but has less grip but I think where the tyre has lost the grip is on the edge for me, or at least for the way I like the bike set up.

“It's just something me and my crew need to spend a bit more time on, maybe sacrifice set up, stability or braking, something somewhere to gain a little bit of edge grip. That’s something we will be trying to achieve.”

‘Brookesy’ now sits only six podium credits behind teammate Redding in the standings, after he was docked 15 seconds for failing to follow the long lap penalty handed to him after cutting the final chicane.

That penalty has helped the 2015 Champion close the gap, but he admitted that he still needs something extra to get closer to Scott when the series travels to Cadwell park in two week’s time.

"For Ducati it looks great, between me winning or Scott winning, it's nearly been every time! On their perspective it couldn't be better, but from a rider’s perspective and a selfish perspective I need to find something extra to Scott.

“He's riding well, and he's super aggressive! I'm actually impressed by how much risk he takes and doesn't make mistakes, that’s credit to him. I need to take a leaf out of his book so to speak and start to do that myself.”

Brookes and Redding now head to the annual ‘Party in the Park’ at Cadwell which gets underway on the 16th August.