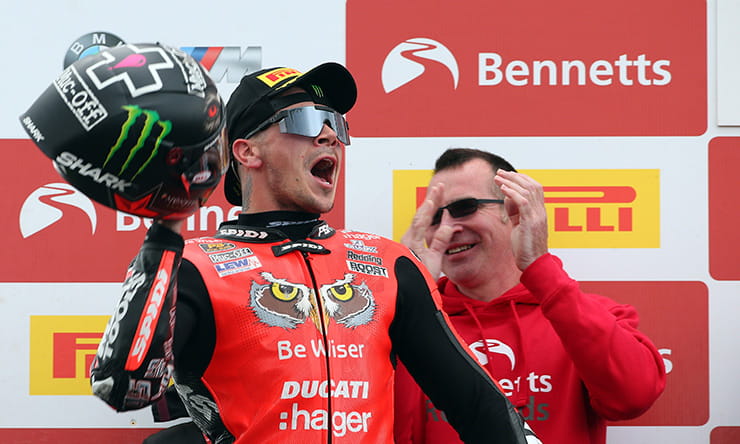 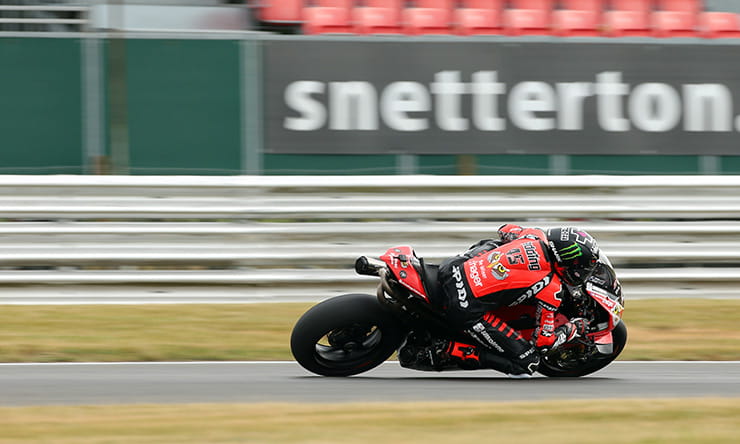 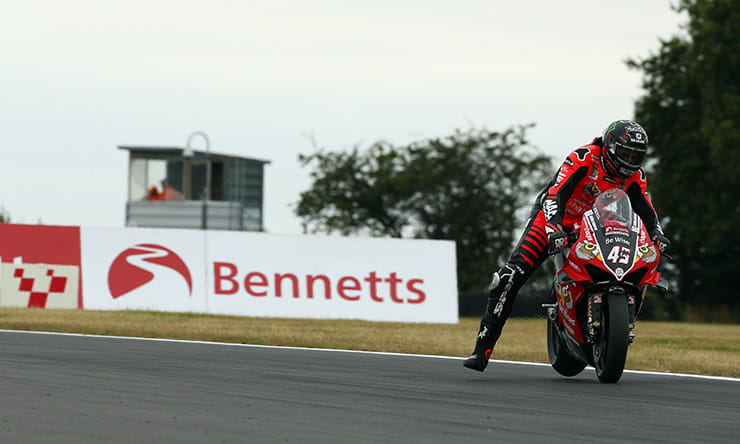 Be Wiser Ducati’s Scott Redding admitted after his sealing his fifth and sixth victory of the season that he was lost for words walking away from Snetterton.

Redding blew the opposition away all weekend, posting the fastest laps in every session on track in Norfolk, taking pole position and the double victory resulting in his third race victory in a row.

From the outside looking in it would have seemed that the MotoGP star had years of experience of around the 3-mile stretch of tarmac, but this weekend’s action was only the second time he’d seen the track.

“I’m really happy with this weekend,” smiled Redding as he spoke to us in his pit box after race 2.

“I don’t know what to say! I couldn’t have asked for a better weekend, other than not to crash in the warm up, because that was my own fault.

“Two wins, a pole position and I won the ‘Race of Aces’ title too, it’s amazing! I couldn’t have asked for much more. I’ve been feeling good, I feel strong, my confidence is there and to do it on a track I don’t know is another bonus.”

In the build-up to the race weekend at Snetterton, Redding headed to the Norfolk based setting for a trackday on his road going V4S practice bike, where he got a feel for the nature of the asphalt. 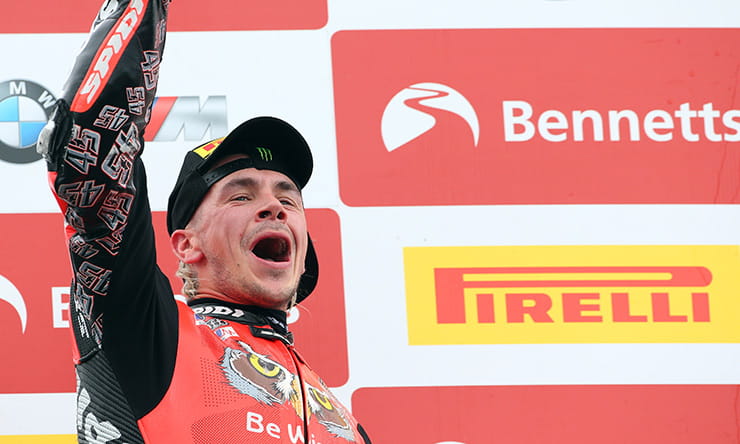 Above: Redding surprised himself with the double victory

And he was helped by former British Superbike and World Superbike race winner, Chris the ‘Stalker’ Walker, who led Redding around for a handful of laps before the Championship leader tore away to learn the track for himself.

Redding expressed that following Walker helped due to his experience, and knowledge of the layout adding that he laughed in helmet during one lap due to an error Stalker made on track.

“He took me round for two laps, if you want to class that as helping then you can. Chris is a great guy, we had a good laugh.

“I just did three sessions on a track day with a road bike which for me, like I said earlier in the weekend, it’s not actually about looking at the track it’s more about seeing the barriers, marshal posts and pit lane.

“It’s so I can forget about all that stuff and focus on the track. Other guys were there as well, I don’t use it as an advantage, we just had access to it.

“I’m just trying to do what I can do, people expect me to win, I’ve got pressure to win, I need to use all the tools I’ve got to try and do that. Thruxton will be hard, but we’ll give it a go!

“Just to have Chris there was great, he really is a great guy. He did make me laugh actually because he nearly crashed on the second lap with cold tyres, which made me smile. We made some laps together but that was it.” 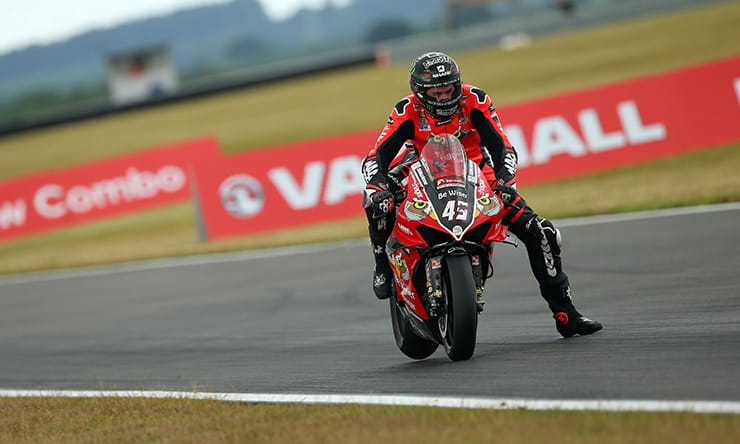 Above: Fully focussed Redding as he brakes hard at Snetterton

Prior to the weekend the talk was all about Redding’s teammate, Josh Brookes, and how he would take the challenge to Scott at a circuit he has more experience around.

But some felt Redding would once again shine through and extend his Championship lead, something he admitted surprised him, after the high bar set by himself in Friday’s practice.

“I don’t know why people expected me to win, I didn’t know the track, but I went out in FP1 and absolutely f*****g annihilated it and then I set my own bar high, maybe a bit too much.

“But that’s it, I’m hungry to win, I feel good on the bike, I feel confident and I’m relaxed in riding.

“I’m just trying to put the puzzle together, not make any mistakes. I made one mistake in the warm up and I learnt from that. I won’t do it again. That’s it. Step on.”

Redding took a comfortable victory in the opening race of the day at Snetterton after chasing down McAMS Yamaha’s Tarran Mackenzie, but race two proved to be much more tricky.

Brookes led from the front, fending off the constant challenge from Redding, but with three laps to go he made his move and showed his class to take his podium credit tally to 35 points.

And Redding expressed that he knew he was faster than his teammate, but finding a way past the Bringelly man was tougher than expected.

“I knew I was faster, but I just couldn’t get past him. We’ve got two quite different riding styles, and all weekend I’ve been out first, bang, gone away and I’m riding in my own way of riding. 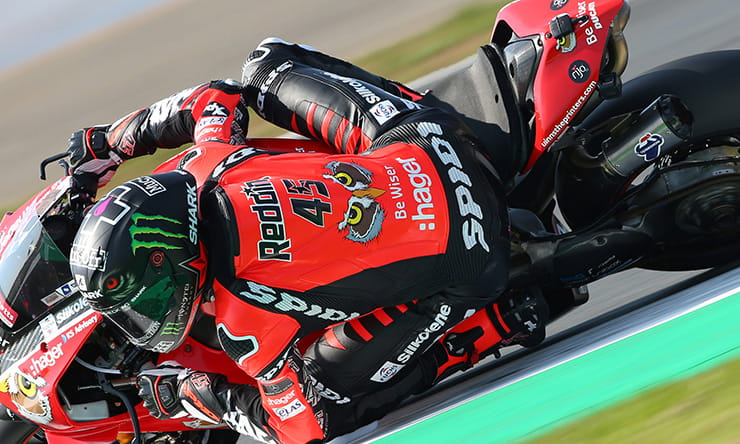 Above: Scott now leads the way in the podium credits tally

“When I get behind Josh I can’t really do what I want to do, and then when I get in front and I can make the gap. I’m just happy that I had a good race and won it.”

Many around the paddock are now scratching their heads as to how they are going to beat the Ducati V4R’s on track, after 23 podium finishes for Redding, Brookes and Bridewell in the opening six rounds of the season.

But he admitted that the combination of good riders, and a strong package put together by the Italian factory, are tough to beat at the moment.

“It’s a combination of both, Josh has won British titles and we’re on the same bike at the end of the day.

“We are both performing well, we’re both good riders, it’s the same for Tommy and every guy out on that track, they’re good riders!

“Different bikes will shine at different tracks, it just seems to be at the moment we’ve got confidence to pull through hard on Sunday’s. Ducati have done a good job to bring a good bike out and they’ve got good riders on them.” 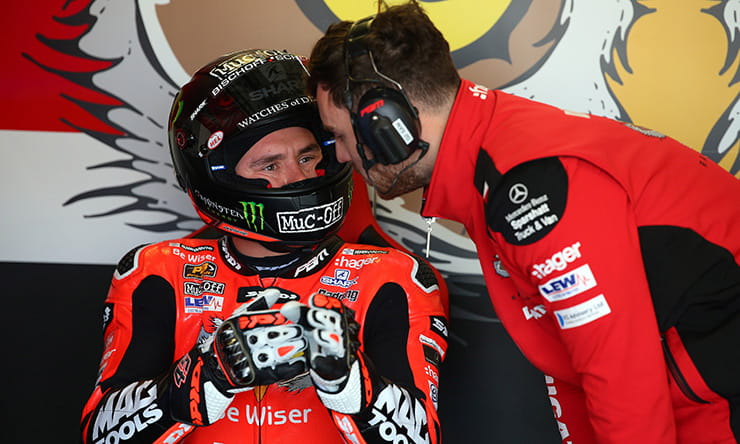 Above: Scott has the full backing of the Paul Bird team and Ducati

Next up for Redding is trip to the fastest track on the calendar, Thruxton, a local track to the home of the Gloucestershire man.

But he laughed to BikeSocial’s man on the ground at Snetterton that he doesn’t have a home race, but it is a circuit he’s looking forward to visiting.

“I don’t have a home race,” joked Redding. “I’ve never been there so it’s definitely not a home race but I’m looking forward to it.

“It’s a new track and it’s quite fast so I’ve heard, I’ve never even been to the premises so we’ll just get there and see what we can do.

“I’ll cycle some laps and have a look round and that’s about it. From a video screen to reality is very different, I’ll just ride and see. Get on the gas and be as fast as I can in the amount of time I have.

“There is nothing to be stressed about. I know I’ve got a good bike and I know I’m a good rider, I’ve got my confidence and I know I can win now so the only danger I have is to myself.

“Like the morning warm up at Snetterton when I crashed, it was my own fault just pushing too hard in wrong conditions.

“So, I learned from it and I regrouped for the race. A lot of people might have thought it would have knocked my confidence, but you know 20 minutes later I was crowd surfing.

“I’m just enjoying my time, I’ve got nothing to be stressed about. The team has done a great job putting a good package together and I must thank everyone in the team from the manager to the chefs, they put it all there for me.”