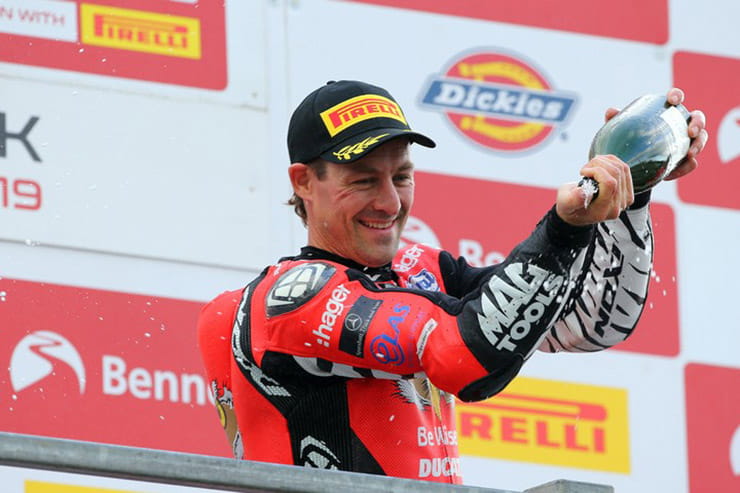 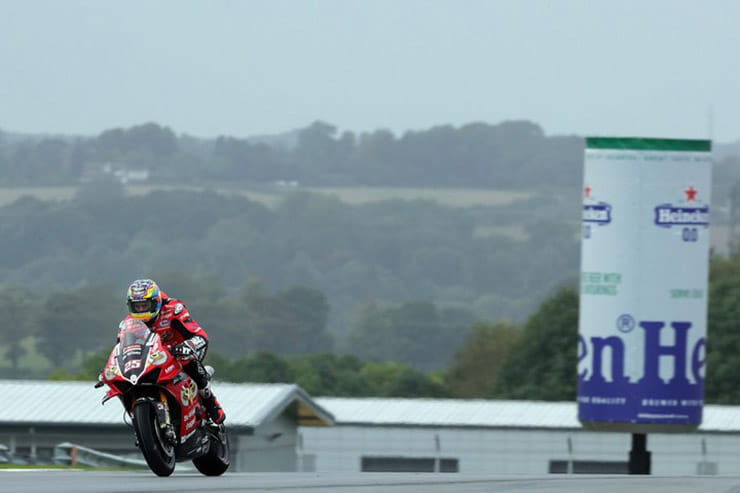 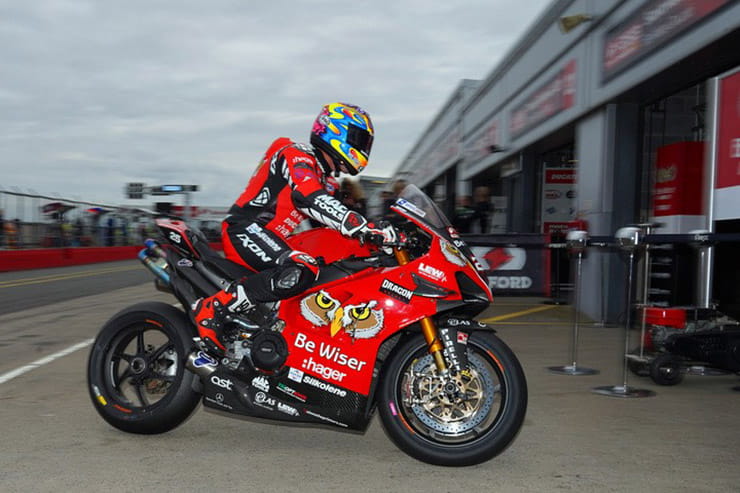 PBM Be Wiser Ducati’s Josh Brookes admitted that his double podium at Donington Park on Sunday was below par of his high standards, as he saw his teammate Scott Redding take a 28-point lead to the final round of the 2019 Bennetts British Superbike Championship.

It looked on paper to be a strong weekend for Brookes who dominated throughout the practice sessions back in May at the Derbyshire circuit, but race day this weekend proved otherwise difficult for the former Champion.

After a string of unforced errors and being barged out of the way by Christian Iddon in the opening encounter on Sunday afternoon, he was left to battle to two hard fought podiums.

And after the weekend he admitted to BikeSocial’s man on the ground that he was disappointed with his performances on race day, stating he is frustrated that he isn’t reaching his potential.

“No it’s not, I find it hard to say the right thing, I feel like if I speak my mind some people criticise my comments but to seek to be the best you’ve got to be disappointed with seconds and thirds, and that’s how I am.

“I’m pleased with my own performance and my efforts on the track but my effort is always 100%, my performance at the minute just feels a little bit off, I’m not reaching what I would say is my personal best. 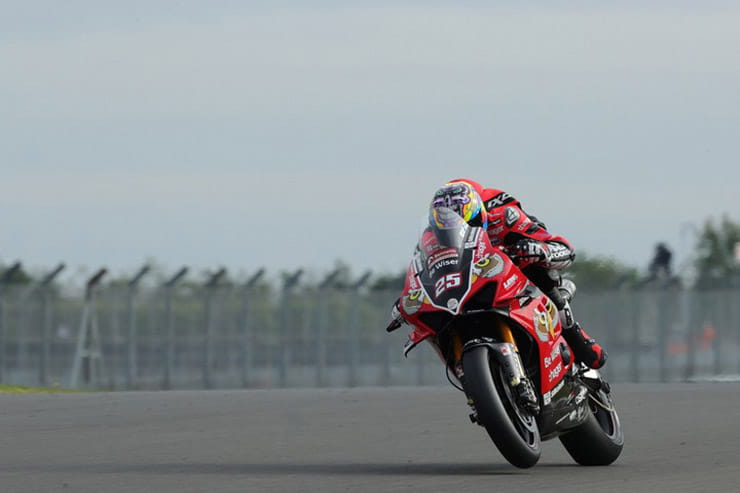 “If it was a long jump, I’m not arriving at my PB, I’m coming up short every weekend. I know there’s more and I can perform better, but I’m not reaching that target and that’s what makes me disappointed.

“If I was setting new standards for myself and still being beaten I’d actually probably be able to deal with it better, and for the public’s sake be happier visually. At the moment it’s just a little bit irritating that I can’t reach my potential.”

Brookes has visited the podium 15 times throughout the 2019 season, picking up seven victories along the way, but in the past four races he has failed to beat the one man he has his eyes on, his teammate.

But the Bringelly man admitted that he wasn’t sure as to what was missing over the course of the three days at Donington, which has now left him 28 points behind Redding in the Championship standings

“I don’t think so, I bashed myself on the ground here pretty hard earlier in the year, the next two races I felt it was going ok and then it started to rain and in the other I was catching Scott then nearly ran into the back of him, and had to run off track.

“Coming here for the second time we had a lot of expectation around where I could be, and all weekend I’ve been close but not really nailed it. 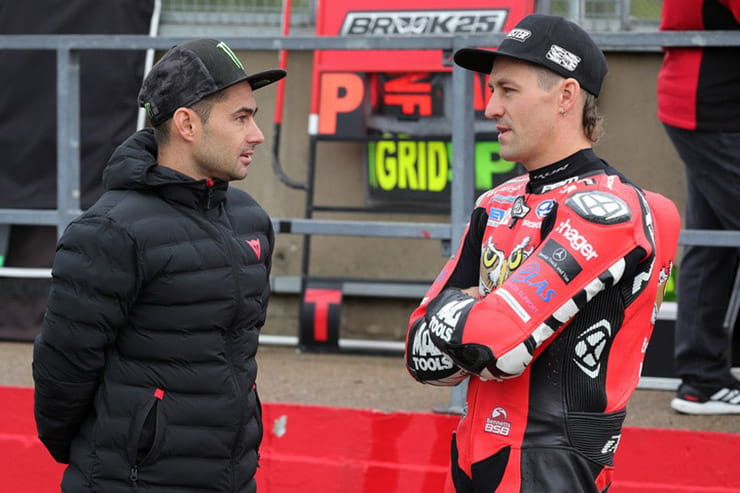 “We’ve been working with settings and changes, but nothing seemed to open up that next couple of tenths that I need to perform better.”

Brookes admitted that even though he is where is he in the standings, his season has been inconsistent with four DNF’s over the course of the year.

However, he added that there is still a missing piece to his Ducati V4-R puzzle which if found could see him challenge Redding all the way at the final round in Kent, one of the Aussie’s favourite tracks.

“I’ve had good rounds and then weak ones, it’s been a bit of an up and down season and what I gauge to understand the performance is how the bike feels in the corner.

“I know without even looking at the lap time, I know when the bike has taken a nice apex and driving out, accelerating well and holding the line, there’s sensations that I’ve had on other bikes, in other years, at other times, that set bench marks.

“The bike is strong in some areas, and I know that there is more to be found in others. I’m not saying that the bike’s wrong, it’s just that we haven’t put all the pieces together for me to have the confidence to take the bike to where it needs to be taken to.”

Sunday’s second race saw Redding take off at the front once again, pulling a lead at one point to just under two seconds from the chasing pack led by the ‘Badboy.’

But when Redding ran in to issues with his gearshifter mid-race, Brookes pounced and cut the gap down to just two tenths of a second in the final handful of laps. 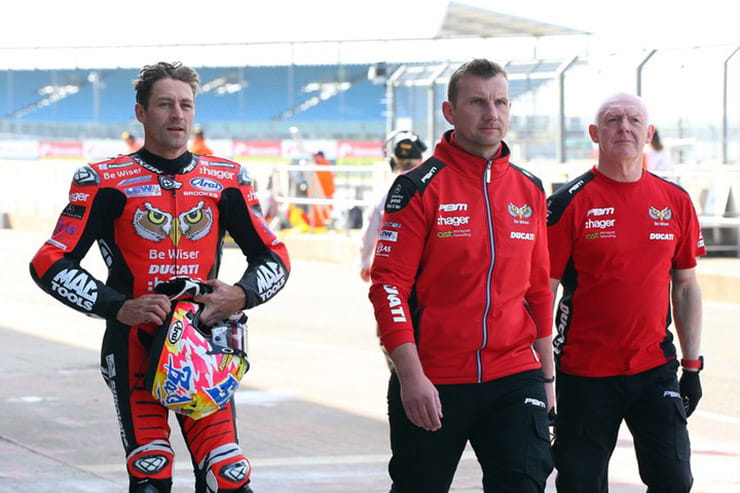 The PBM Be Wiser crew worked tirelessly all weekend

But Redding did enough to hold on for his 11th win of 2019, and Brookes told BikeSocial that he felt it would be ‘pathetic’ for him to say with one more lap he would have won the race.

“I don’t know, I don’t want to say that ‘oh if I just had one more lap’, it sounds pathetic. I had 20 laps or whatever the race distance was, If you had more why didn’t you get it earlier.

“So, I think it sounds pathetic for me to try and grasp at that ‘one more lap’ idea. The bike was just a lot better in race two, what I can imagine is that we had poor tyre performance in race one, because I was nearly a second a lap quicker in race two than I was in race one.

“Where do you find a second with the setting of the bike? You can’t. So, for me I think we had poor tyre performance in race one, and we just went back to normal in race two.”

Brookes seemed a deflated figure in his post-race Eurosport interview following race two, after being beaten by his team mate once again.

However, he expressed that losing out to his teammate for the fourth straight race doesn’t affect him, he aims to beat everyone on the grid, whether they are on the opposite side of the garage or not.

“That doesn’t really make any difference. Honestly. Whether it’s Shakey, who I’ve raced against in the past, or Tommy Hill or Kiyonari, or whoever I’ve had to race against, it’s made no difference whether they’re in my team or not. 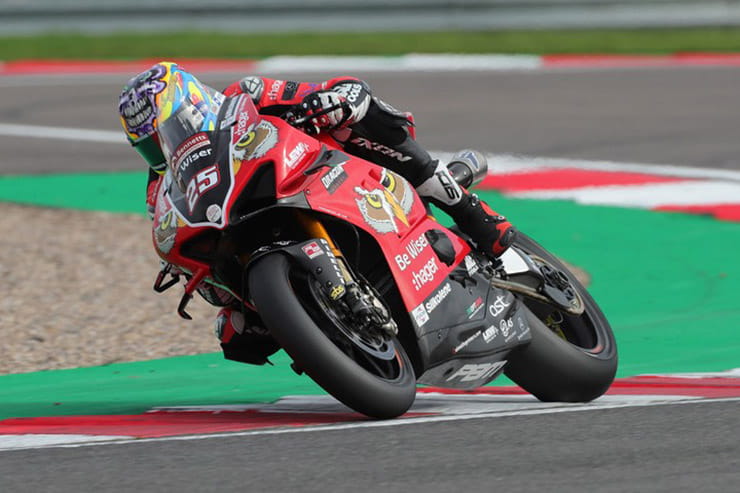 28 points separate Brookes from Redding in the standings

“Everyone on the grid you’ve got to beat, so whether they’re in your team box or someone else’s, it doesn’t matter. Someone else might have a different opinion, but from my understanding it doesn’t seem to make any difference.”

The title race is set to go down to the wire between Redding and Brookes, with just 28 points separating the pairing.

But, Brookes has been in this position before back in 2017, where he trailed Leon Haslam and Shane Byrne, narrowly missed out on the title by just three points, and he knows that it is still all to play for.

“Mathematically it’s a chance, but I don’t want to win a championship on ‘oh he fell off and I won’ or someone else’s misfortune.

“I’d rather have been able to push him all the way all season, but for whatever reason we’ve arrived at this point and I haven’t been able to do that. I’ll still go into Brands and try my hardest. It’s annoying that it has to come down to circumstances if that is the case.”