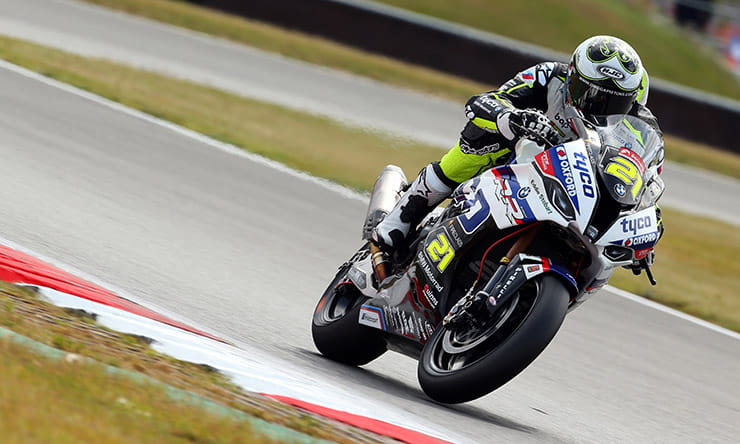 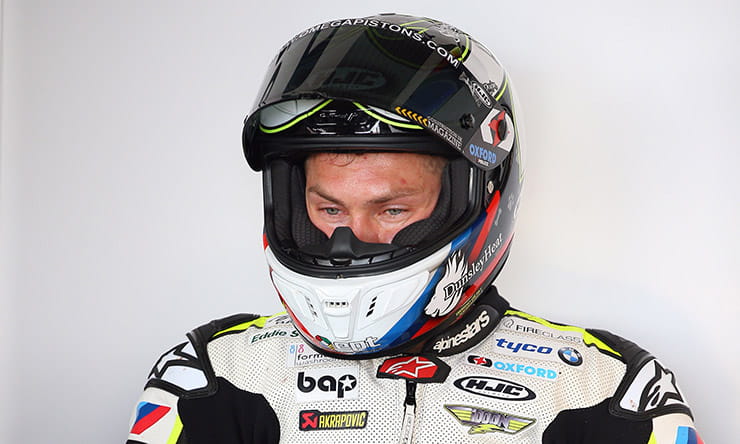 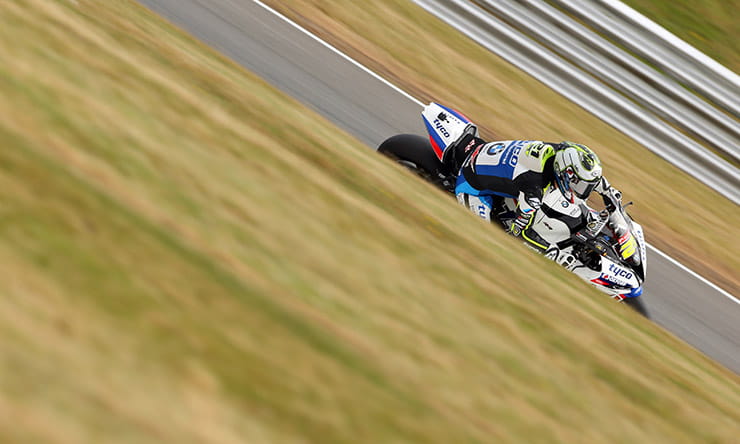 Not all hero’s wear capes but Tyco BMW’s Christian Iddon might as well had done at the sixth round of the Bennetts British Superbike Championship, walking away with a sixth and tenth place finish.

In the grand scheme of things many will say those results are fully expected from the former World Superbike star, however for those who don’t know, Iddon broke his leg in action at Knockhill just over three weeks ago.

Take a look at footballers or rugby players, if they break their leg it’s a full season out of action for some, but Iddon knew as soon as he hit the floor during race two at Knockhill he was going to be out in action at Snetterton.

Staggeringly, the Huddersfield University graduate hobbled out of his garage just under three weeks from the accident, and still brought home a handful of points, a result in which ‘Iddo’ was more than pleased with.

“Especially given when I think we’ve lost next to nothing to Xavi (Fores), with Danny’s misfortune in race two I think we lost nothing to him, Hickman has pulled a few on us but it’s not the end of the world.

“So, the only goal really was to go there and score as many points as possible. The last three years I’ve lost the Showdown place by less than 10 points, so to me every single point is gold dust really. That was the plan and that’s what we’ve come away having achieved.”

Iddon shocked the paddock with his results, but as many said as soon as he was taken off by the marshal’s in Scotland, ‘he’ll be back on the bike at Snetterton.’ 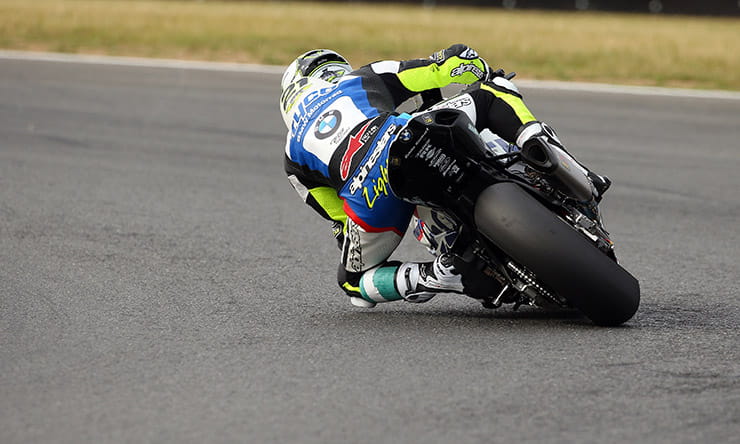 And he sure was after days and days sat in a hyperbaric chamber, something which many racers use to heal tough injuries, but BSB’s very own Ironman admitted to us that racing was the best form of rehab.

“The main issue for me this weekend was that we lost day one almost completely,” expressed Iddon holding his protective leg guard.

“I genuinely wasn’t even riding the bike but it was almost like a day of rehab, because it allowed me to move the foot and get it back working again. I’ve been very, very careful with it.

“The last time that I broke exactly the same bone in 2015 I was back on it immediately, but that was detrimental to the rest of the season, so this year I tried to do it the other way around and really, really keep the ankle immobile.

“It’s a connecting bone and it sounds bad, a broken leg, but it only takes 10% of your body weight. I don’t want to hang it up because that’s not fair, but the ankle movement was a major, major issue for me and getting into position was the big problem.

“We had to modify the bike, not a lot, but as much as we could so that I fit on it. The left foot peg was a lot lower than the right one, so I was riding a bit cocked, but it was the only way really to get myself on it.

“I’m reasonably content. Race two I feel like I certainly could have done a lot better but all weekend we’ve had a problem with chatter, which we haven’t had at any other round.

“Race one it was there a little but race two was absolutely horrendous. I’ve never had it that bad, ever. There were certain corners where it was costing me a lot of time and it was hurting me a little bit. It’s always if, buts and maybes with these sorts of things.” 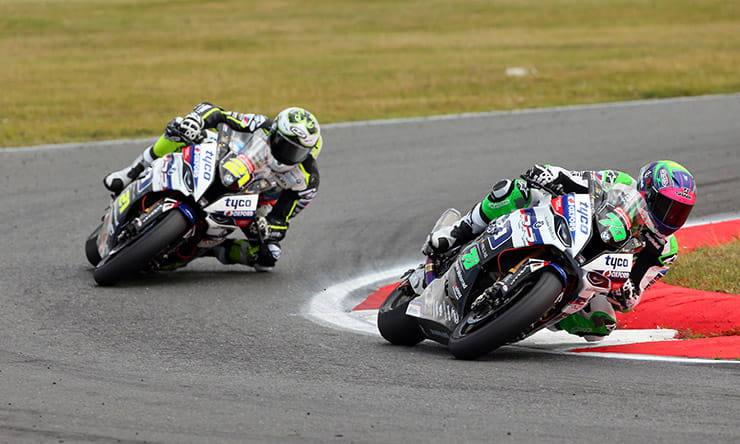 Iddon has had a strong season so far onboard the all-new BMW S-1000RR, although he hasn’t taken to the podium as of yet, the progress is there to be seen.

Running a stock engine, testing new parts every weekend with limited time to asses to benefits, Iddon is just a small matter of 22 points behind sixth in the Championship, even with a broken leg.

But the Stockport man admitted how disappointed he was with how far off the top three he is, expressing that something needs to be done to bring the Championship closer together.

“I’m disappointed with how far we are off the top three. I think something needs looking at now, it’s getting a bit silly.

“I don’t like saying it because there’s every chance that they’re the best three riders, and if they were on any bike then maybe they’d be 20 seconds up the road, but I don’t believe it.

“I don’t know, at the moment its’s like you’re in a ‘B’ race almost, after three laps I didn’t even see the first four riders.

“Tarran had gone along and done a bloody good job until he fell over, but he was the only one. We’ll see how it goes but from my side I’m happy.”

When quizzed on whether Iddon would be speaking with his team to protest against the dominance of the Ducati V4R, he stated that BSB officials could look at bringing the field closer together.

“It’s not a protest, it’s nothing like that. I just think it’s looking a bit clearer and clearer.

“That’s the nature of bike racing though, essentially we are like jockeys, you can put the best jockey on the worst horse and it’s still not going to win a race.

“But, you put the worst jockey on the best horse and it’s got a chance. That’s the nature of the beast and for all the teams to do their job.

“It’s not that I feel they’re doing anything against the rules or anything, fair play to them they’re winning races. It’s nothing you can take away from those people.

“It’s certainly not me going against anything that BSB do but maybe a bit like the work they do in World Superbike periodically, maybe they could have a look at things that could be done here that’s all.” 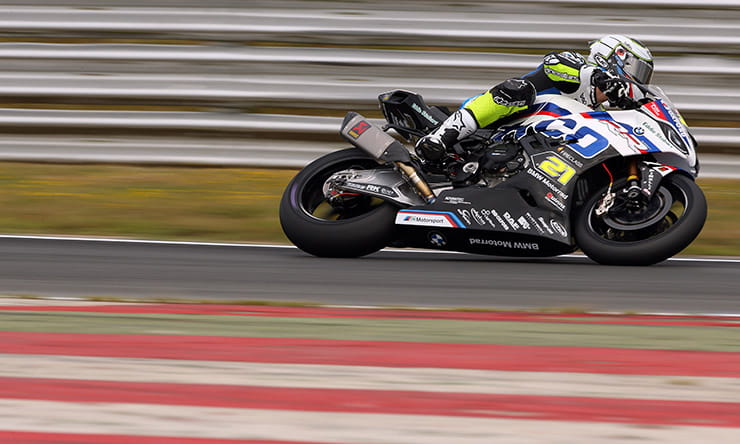 But even after Iddon admitted it’s tough against the Ducati’s, he was quick to praise their work on, and off the track. But should other manufactures look at working to the Italian model?

Members of the general public can go out and purchase a V4R, exactly the same as Scott Redding’s, but Iddon admitted that although it works for Ducati it may not work for the likes of BMW, Yamaha and Kawasaki.

“You’re getting into the politics of massive businesses, and can they and can’t they afford to bring out a special version, that’s completely down to people way above everything that can ever fathom this series.

“In terms of that we’re so far down the pecking order that that’s never a thing. I do think that the aerodynamics side of things is something that I can actually see all manufacturers bringing out a W version, a winged version of their bikes.

“Because essentially once you do a little bit of wind tunnel testing its probably the easiest thing to implement onto a road bike. You simply put new fairings on it, you don’t have to change chassis, engines, anything!

“You don’t have to product test it to within an inch of its life, make sure it does ten million miles, a wing is a wing. If it produces what it needs to produce, then I don’t see why manufacturers can’t jump on that quickly.

“I genuinely feel that at the show at the end of this year you’ll see manufacturers with the old Halford wings on them.”

Every Mum and Dad will remember as a kid the words, ‘there is nothing wrong with you, get up and get to school.’ 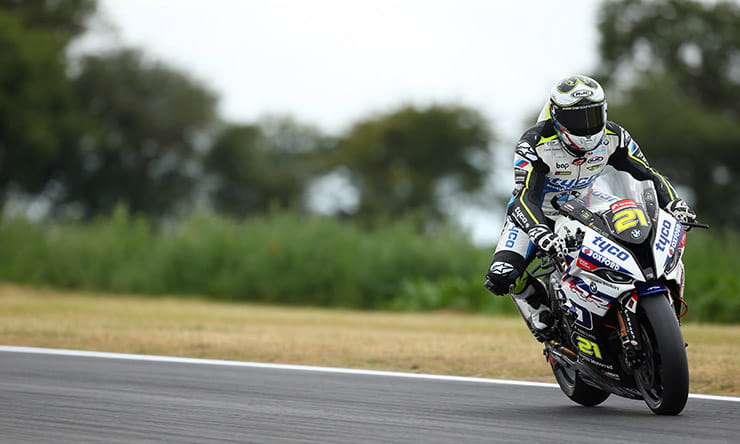 No injury will stop Iddon racing his Tyco BMW

It’s a way of life, if there is something wrong with you then someone with send you home, and Iddon admitted that his upbringing around the paddock and the way his family works means that no injury will stop him from achieving his dreams.

“I was brought up around racing and my family is a no sympathy family, to the point that if anyone ever comes round, it looks like we’re all being really nasty to each other.

“If I went out and won the championship one of my family would say ‘only because of something’ or ‘you should have won it by more’.

“We never have a good thing to say about each other, but that’s not a bad thing, I don’t mean it in a bad way, we just take the mick. There’s no point in going for sympathy, no one will give you none, you’ve got to listen to your body.

“It’s by virtue of the type of injuries I’ve got as well, it just so happens that a lot of the injuries I’ve had are rideable. I’m not doing anything that I don’t believe other people wouldn’t do, I really don’t.

“As soon as I broke it at Knockhill my focus was on coming here. As soon as the bike landed on me, I knew exactly what I’d done, I told them not to bother x-raying me just give me a pen and I’d draw where it was broken. They were quite impressed with that as I was bang on!

“If you focus on something, you can get to it, or you’ve got more of a chance. If I started thinking about Thruxton the minute I fell off I probably wouldn’t have been back until Thruxton.

“It’s about being proactive, I did everything I could, had every therapy, that isn’t proven by anyone but why not try it, and we went to Snetterton we’ve scored some points, you never say never.

“I’ve spent too many years achieving what I didn’t want to achieve, and I feel like I’ve underachieved. It hurts me every day.

“It’s hard for me to live with myself when I feel like that, there’s so many other things in life but getting away from that feeling in racing is very difficult, it can take over things.

“At the end of the day, racing doesn’t matter but you tell that to a racer, and it doesn’t ring true. When you’ve chased something for long enough, I couldn’t ever be happy with myself unless I gave everything I’ve got, so that’s what I try and give. Hopefully that gets seen.

“It doesn’t always work out for the best, it sometimes doesn’t work out at all, but you’ve got to try.”