Redding on Irwin: “I’m lucky not to break my leg again” 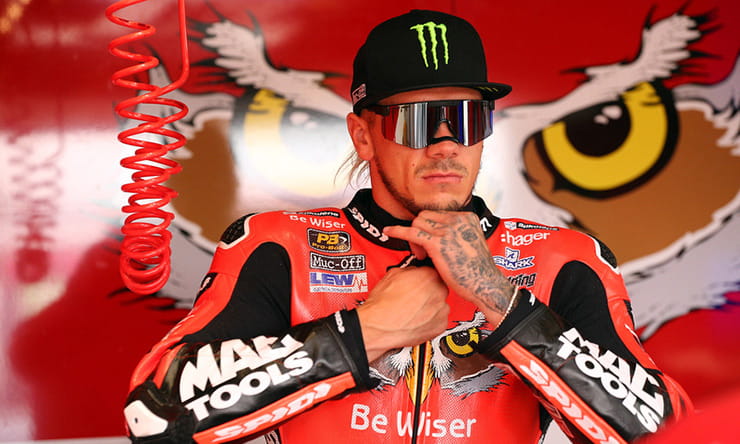 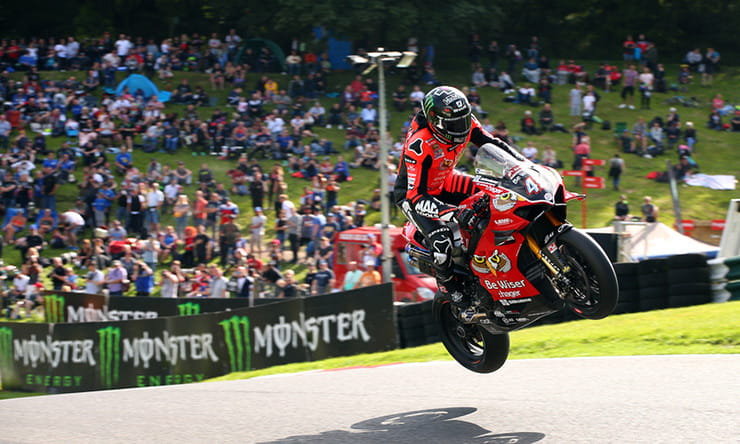 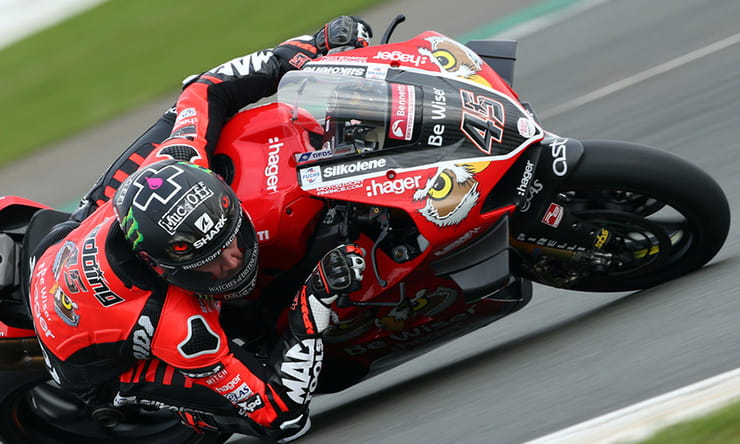 PBM Be Wiser Ducati’s Scott Redding was left frustrated and angry at Cadwell Park after being taken out of race two in Lincolnshire by Honda Racing’s Andrew Irwin.

Irwin’s ambitious move at Park corner on the second lap of race two took the pair down leaving Redding understandably angered by the move, making his feelings clear as Irwin apologised.

But after the weekend Redding told BikeSocial that he was both ‘speechless’ and lucky to walk away from the incident scratch free.

“I think it [the television footage] showed what I think, I don’t want to say the wrong thing but I’m speechless to be fair,” expressed Redding.

“I’ve hurt my leg a little bit and I’m lucky not to break my leg again he hit me that hard. You can see from the onboard how far back he came from, out of control again to t-bone me again.

“He put his hands up and said he made a mistake but it is the second time this has happened, and the fourth time we’ve had contact in the year, it is a little bit too much for my liking.

“It’s not fair on me, my whole race was ruined, and I was lucky not to be injured, we’re here to win a Championship we’re not here to just win one race, the race was 18 laps not two.

“I don’t know, I’m just a little pissed off about it all because I lost out on the chance of having a good race, I had the pace to get on the podium, I felt good with the bike going forward and he just ruined it for me, but it just hurts, I went there to win, respect the other guys and do my best but you are going to lose your s*** at some point.” 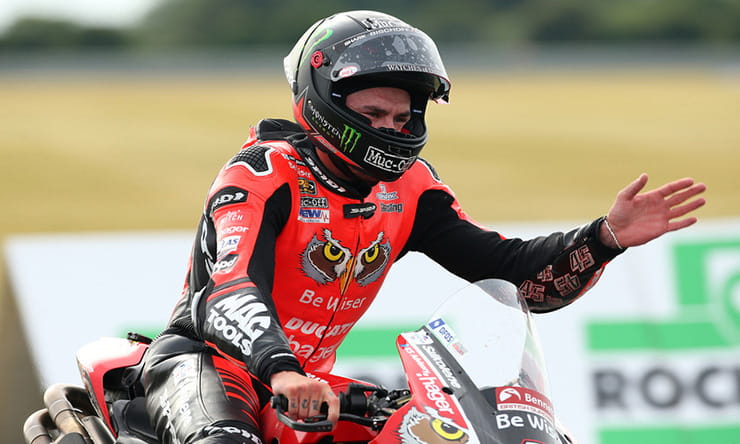 Above: Scott was left raging with Irwin at Cadwell Park

Redding was straight to his feet after the incident, running across to an already apologetic Honda Racing rider, who held his hands up to admit the mistake.

Some may see what ‘ReddingPower’ gets up to in his breaks from racing on his Instagram account, engaging in boxing training, and he admitted that he was ready to prove a point to the Northern Irishman but quickly refrained.

“I was ready to go but I know there is more to lose than there is to gain, I would have been the one that missed out at the next race or maybe even the rest of the season.

“I have a Championship to try and win and I have to deal with stuff like that, I can be hot-headed and I can be calm and collected and that was me being hot-headed, I did the best I could.”

It is the second time in 2019 that the pair have come together in the races, with Redding taken out at round one by Irwin, who received a ‘long penalty’ for the incident.

This time around race director Stuart Higgs handed the former PBM employee a penalty large enough to send him to the rear of the grid for race one at Oulton Park.

But Redding went on to say that he feels Irwin is getting desperate on Sunday’s, forcing him to make dangerous moves. 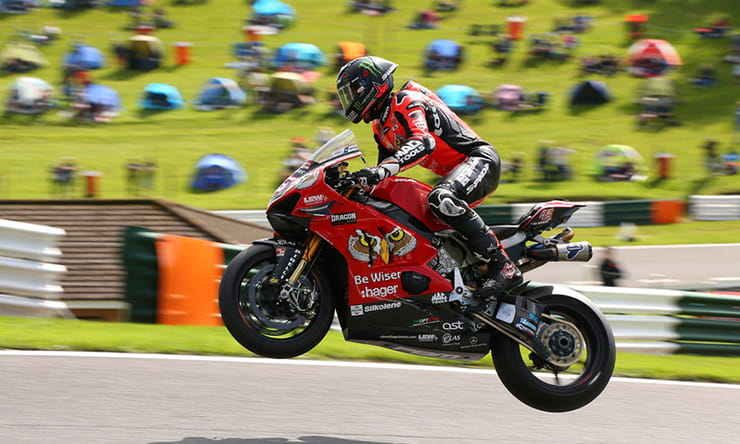 Above: Scott quickly learnt the hardest track on the calendar

“I’m just frustrated, I need a way out but there is no way out, you are trying to explain to someone who just can’t listen.

“I don’t know if he’s listening or if he’s running out of…not talent, but if he’s just a little bit out of his depth.

“It just seems to keep happening, I know he won at Thruxton and he is a good rider, but sometimes he’s just maybe a little bit desperate I don’t know, it was lap two of the race all he had to do was calm down.

“I beat him in the first race, and you would have thought he would have stuck behind me and gone forward but the brain doesn’t work like that.”

Irwin immediately held his hands up following the crash, and also took to twitter to make peace with the Ducati man, but for Redding it wasn’t enough, who now sits second in the Championship standings.

“I think he has to start from the back of the grid for the next and that is it. He kind of has apologised but what is it worth? The damage is done, end of story, there is no more about it.”

Since joining the Bennetts British Superbike paddock Redding has been the man to beat, with most of the grid aiming to beat the former MotoGP podium finisher, and after the first incident with Irwin he admitted he felt he had a target on his back. We asked if he still felt the same after meeting with race direction at Cadwell Park:

“I did at the beginning of the year but it all kind of ironed out a little bit,” said Scott.

“But it’s the same guy second time around and that is the problem. I can’t do anything can I?

“We’re in the Showdown, I’m not too injured which is a positive but at the end of the day we went to Cadwell Park to win but you can’t do it with people like that but we’ll move on, head to Oulton and get on to the box again.”

Redding has now secured his spot in the end of the season Showdown alongside his teammate Josh Brookes, after a dominating mid-season where the Cumbrian team have won at least one race at every track since Donington Park in May. 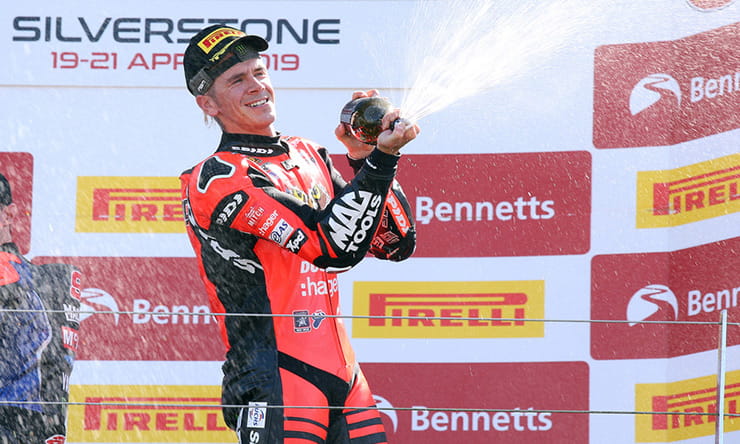 Above: Redding is one of three men confirmed in the Showdown

But Redding admitted that now he’s moving on to tracks that he has experience of, and circuits that favour Brookes and his smooth style, it could be a Ducati battle to the end for the crown.

“Josh has been a little bit stronger but I think that is because of me not knowing the tracks, so going to Oulton I know he’ll be strong but at least I know I can start on a good pace.

“I went there like I went to Cadwell, with an empty sheet, so going there I know what to do and what to expect so at least I can kind of push on from the beginning and see where we can go from there.”

Cadwell Park saw Redding follow Brookes in Q2 and at some points during free practice, and after taking pole position on Saturday the Australian was critical of his teammate, but Redding explained as to why he chased him around.

“It’s funny people have said that, I didn’t follow Josh around a lot. I followed him in Q2, and maybe in one of the practices.

“At Oulton Park I followed him in every session, at Cadwell I only followed him one or two times and he kicked up a little bit of a fuss about it, saying ‘why does a rider of my calibre need to follow him?’

“Well it’s because I want to win, I was at a circuit I don’t know, it’s very technical, and he’s the best rider around there and I need to learn from the people around me. 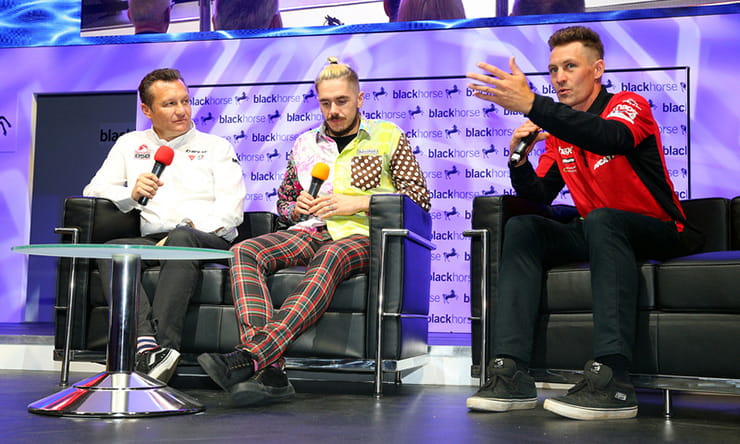 “I’m pretty sure he would do the same if he was in my position, and a lot of riders would, the problem is I can be quite dangerous, I can learn circuits quite fast but it is it what is, I’m here to race and we get on alright, but he did a good job at Cadwell, fair play to him.”

Before the start of the season many said that Brookes and Redding wouldn’t get on, however the pair have been harmonious until last weekend at Cadwell.

Redding expressed that his relationship with Brookes is ok, but admitted that they aren’t the best of friends on or off the track.

“It is alright, it is a little bit touch and go, I wouldn’t say we’re best mates but we’re teammates we are here to do a job and be professionals, that is it.

“There is going to be a little of roughness, maybe I ruffled his feathers at Cadwell but he held his own, did a good job and he got a win at the end of the day so fair play.

“It isn’t a game plan, I’m trying to learn the best I can and I’m trying to win so I need to use all the tools I’ve got, and if that is following my teammate and other riders then I’m going to use it.

“It’s not that I mean it in a harsh way or that I’m trying to be a little bit of an idiot to do it I’m just trying to use my tools to the best of my ability.”