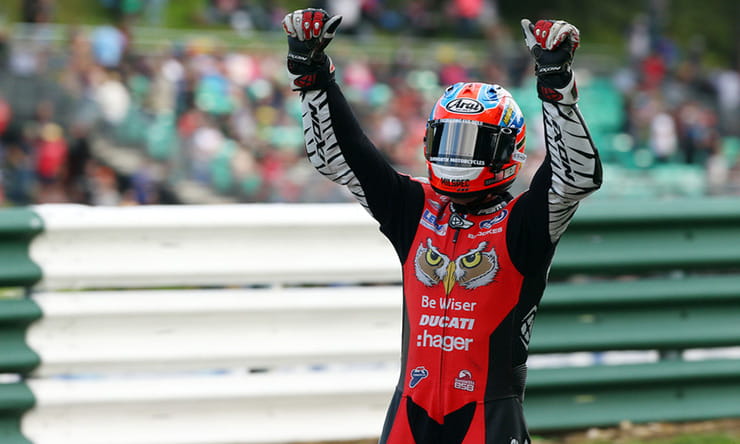 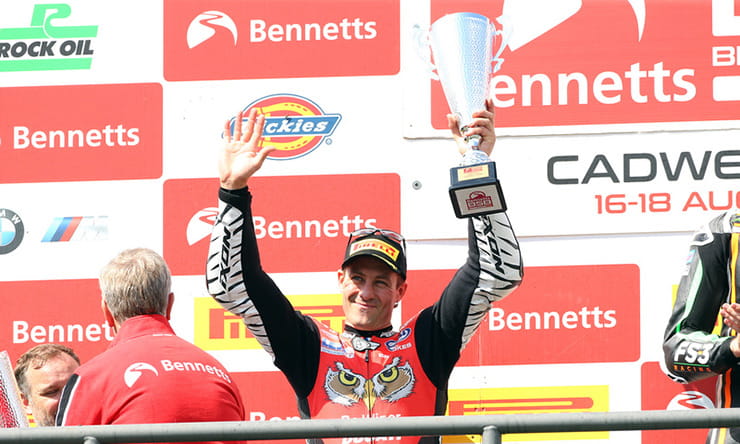 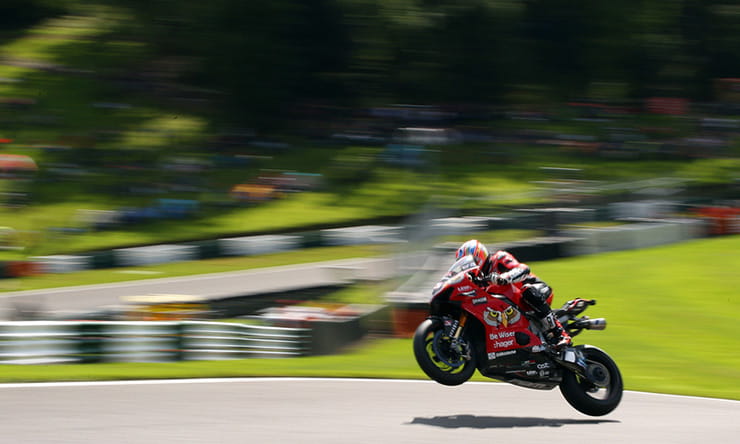 PBM Be Wiser Ducati’s Josh Brookes walked away from Cadwell Park as the new Championship leader, taking over from teammate Scott Redding, after securing his first win in Lincolnshire since 2015.

Brookes had looked unstoppable all weekend after ending Thursday evening’s private test seven tenths quicker than the rest of the field, but the Australian didn’t have it all his own way come race day.

Brookes finished second behind a strong Danny Buchan in Sunday’s opening outing, but race two saw the former Champion take his first win at Cadwell Park since 2015, when he did the double onboard the Milwaukee Yamaha. He spoke to us afterwards:

“I have to be happy, obviously leading the Championship is a great feather in the cap,” Brookes said after a lengthy debrief with his crew following his second race victory.

“It was a good weekend pretty much from the start when we got the extra practice in, everything was going well but we made a slight error in race one with the set-up of the bike, and I feel there might have been a way to go better in that race.

“But I was so close to falling off a few times I felt second was better than a non-finish, so I rode as hard as I could and hoped that something would change but I was just as happy to come second because I felt that was the limit.

“We fixed the problem I felt in race one and the result speaks for itself, the team did a great job and they gave me the bike I needed, I was able to overtake Tommy and I was also able to keep Danny at bay so it was the perfect finish really.” 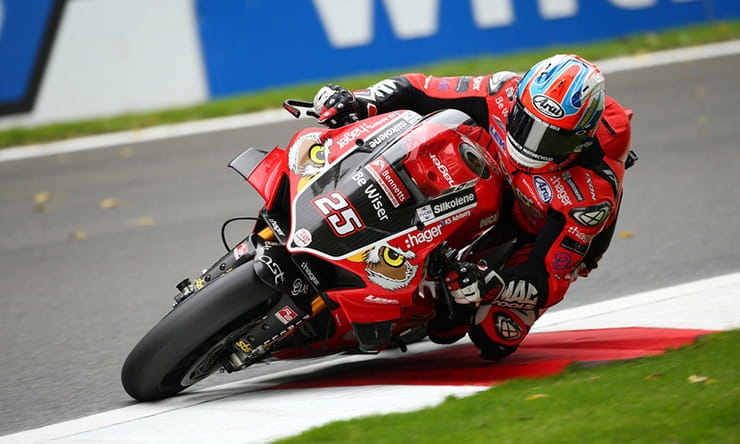 Above: Brookes now leads the Championship and podium credits tally after Cadwell podiums

Unusually the organisers, MSVR, ran a private test on the Thursday evening prior to the race weekend, giving all the Bennetts BSB teams an extra three hours on track.

And it was the Bringelly born man who made the most of the time, leaving the test fastest by seven tenths of a second over FS-3 Racing’s Danny Buchan.

But Brookes admitted after the weekend that without the extra track time it would have been difficult to judge if he would have had such a strong weekend, like he did.

“It’s hard to say because you don’t know, in hindsight you could say ‘ah take it away and I still would have gone good’ I don’t know.

“I would like to have thought we’d have still had a good weekend but that is history, we did have the extra time, we did do the extra practice but so did everyone else on the grid.

“So, for every moment I felt that I improved, they improved as well so you can’t think about it too much and you have to make the most of every opportunity that you face.”

Heading in to the weekend at Cadwell most hedged their bets that Brookes would be the man to beat, with his style over the Mountain and the dominance of the Ducati V4-R in the series.

However, the woodland based venue hasn’t been a happy hunting ground for the ‘Badboy’ since his return to the Championship in 2017. 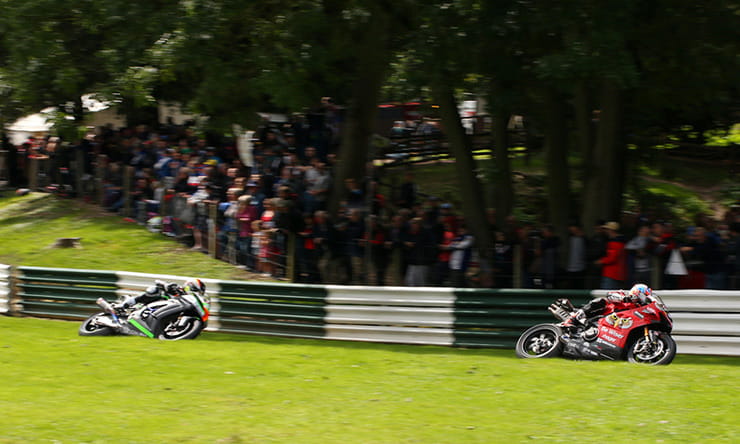 Above: Brookes got the better of Buchan in race two

Brookes hadn’t won at Cadwell since his Championship winning year of 2015, and after the weekend he admitted that it has been somewhat of a ‘bogey’ track for the 37-year-old.

“I agree with that, in 2015 the bike felt amazing and I felt like I had an advantage over everyone, the bike just really worked.

“I came back in ‘17 and ‘18 on both the same brand of bike and it just didn’t click, something was missing and wrong, I felt out of place and I couldn’t put my finger on it because I didn’t know why, maybe we could have done with a Thursday practice those years.

“I feel like this year from the very first practice on Thursday evening we were already in good head space and the bike was working well and we’ve reaped the benefits as a result. I haven’t really thought about it being a bogey track, but now that you’ve mentioned it I’m glad to get to that winning way again.

“So many people think that I love the track because there is so many pictures of me doing the jump so people assume that it must be my favourite track, and it’s often a surprise to everyone when I say it isn’t my favourite.

“As you said the results over the past few years show it hasn’t been a great track for me, so it’s good to put that bed and know that the track can be won at again.”

The weekend wasn’t without drama though for Brookes who had to deal with his teammate Scott Redding following him during some sessions out on track, including Q2, the most important session of the three-tier session. 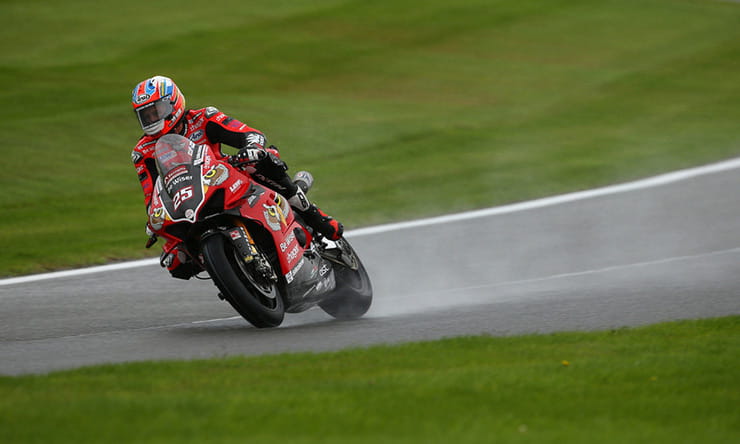 After snatching pole position Brookes was left frustrated by his teammate’s actions on track, and exclusively expressed to BikeSocial that he felt the former MotoGP man’s antics on track were ‘immature’.

“He comes every session, every time I leave the pit he leaves at the same time and rides behind me.

“It’s great that he wants to follow me but why the hell does he want to follow me? There are 30 other people on the grid that are fast as well.

“I’ve raced against some great Champions like Tommy Hill, Ryuchi Kiyonari, Shane Byrne and on track it always remained professional, it’s never dropped to foolish and childish acts of aggression on track, it’s always been professional and fair there has always been hard passes but it’s never gone any further after the race.

“So, I’m really surprised, in fact I’m shocked, that there is this immature character coming out in him. I think from Grand Prix you should be at the highest level and coming to a domestic series it should be him being surprised by childish moves from local riders, not the other way around.

“I’m just shocked, I don’t understand it, I don’t know what he’s trying to do. I hope it’s just a phase and he gets over it, but I just wanted my own space on track I’ve done the same thing for 10 years in BSB.

“I’ve always wanted to go out and find my part on the track and get away, be on my own and not interrupt anybody else’s riding and not have others interrupt mine I just think that is fair.

“A few times Hickman and Iddon on certain days they’ve gone out first and wanted to get that clear piece of track, and I’ve let them do it It’s never been a rivalry thing.

“It’s like a surfer pushing another surfer off a wave, it’s not that they are a better surfer or more deserving of that wave, it’s just etiquette, you just find your place and respect everybody. I think there is just a lack of respect.” 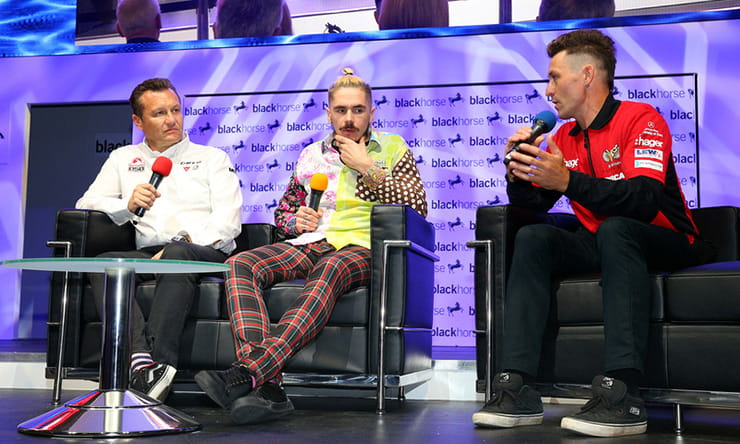 Above: The two teammates look set to go head to head for the 2019 Championship crown

Was Redding playing mind games with Brookes, or was he simply following the most experienced man in the field, around what is the toughest track on the calendar to learn?

Well Brookes stated he hopes that mind games aren’t on the agenda, and he wants Redding to move on from what the Aussie felt Scott was doing during practice and qualifying.

“I would like to think that he isn’t trying to do that, but the actions speak louder and suggest that, but I’m not saying that.

“I’m just saying that it’s gone now and it was a short thing that he can forget about and we can all move on, because I think the Championship is better than that.”

With Brookes now secured in the Showdown for another year, the remaining four rounds of Championship are all at circuit that Brookes loves; Oulton Park, Donington Park, Assen and finally Brands Hatch, where Brookes has enjoyed much of his success in BSB.

But he expressed that he feels baring mistakes and mechanicals he has been one of the strongest on the grid in 2019, and that it is just ‘good timing’ that he leads the way in the series as he heads into his favourite rounds of the season.

“I don’t feel that anything has come together more. I had great races at Brands Hatch and won both, I had good races at Oulton Park and won both, I was strong at Donington until I crashed, so I’ve had a lot of good race already this year.

“The pace and potential is there I’ve just had moments that are out of my control that have been contributing factors.

“I’ve just tried every weekend to put that stuff out of my head and focus on the job I can I do, it sounds pretty basic and logical but that is all any rider can do is do their best every time and hope that the rest comes together.

“I don’t want to put my chest out and think ‘Ah now I’m leading the Championship I’m the big dog’ that isn’t my train of thought.

“I hope that these tracks coming up next are favourable for me that is the mental space I’ll try and put myself in and try and prep for these coming rounds but I’ve got to be ready for anything because everybody will be trying as hard as I am.”