Bridewell: “You can’t imagine the demand I was putting through that bike, there was nothing left” 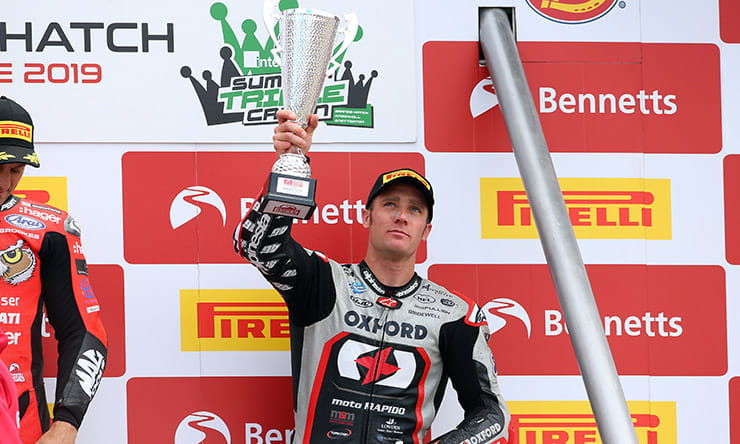 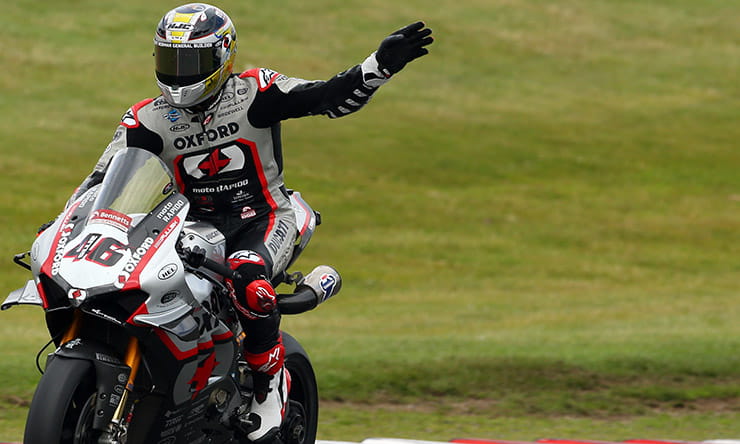 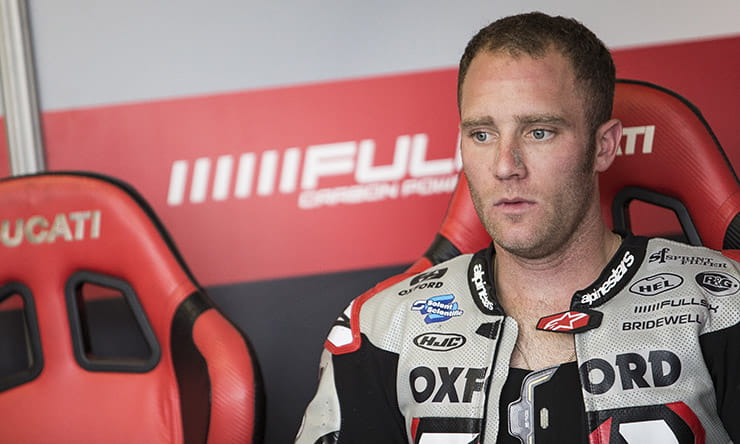 Bennetts British Superbike Championship leader Tommy Bridewell feels he and his Oxford Moto Rapido Ducati team need to turn over every last stone to get the better of Josh Brookes.

Bridewell left the Kent countryside with a 14-point lead in the Championship standings from Ducati rival and good mate Josh Brookes, after two podiums enhanced his grip on the Bennetts British Superbike title race.

After finishing the wet first race in third place behind Dan Linfoot and winner Brookes, he pushed his Australian counterpart all the way in the dry second race, but ultimately had to settle for second best once again.

‘Rock on Tommy’ is still awaiting his first victory onboard his Ducati V4R in 2019 and feels it is going to be tough because of the strength of the bike he, and Brookes are competing on.

“I’m happy,” expressed a delighted Bridewell following the second race press conference. “After race one I was a little bit disappointed because I felt like we’d done a lot of hard work. 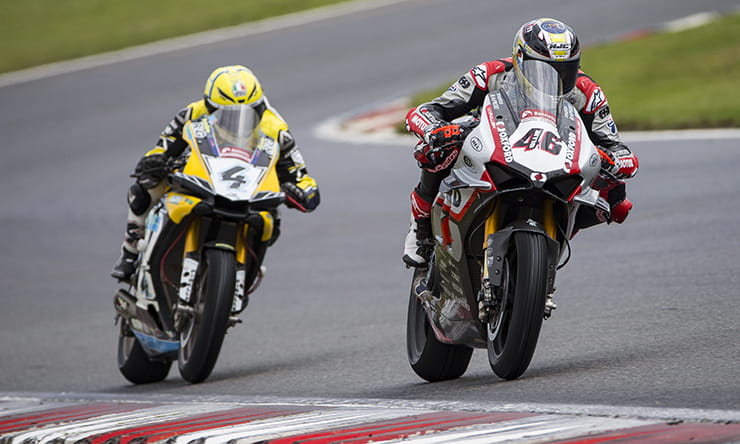 “I knew Dan was sat behind me, and to be fair to him he rode a great race and he did what I would have done.

“He sat in behind me and allowed me to set the pace, but unfortunately when my tyre started dropping Dan had the pace, and then Josh had it even more again.

“I was a little bit disappointed with that, but with race two I was really happy I rode to the absolute limit of myself and the bike, there was nothing between me and Josh and to be honest he had track position.

“He won the race, but I had to come from seventh and it made it a little bit harder, I had to make some moves but I’m really happy about it.

“Like I say, we’re a little small team from Winchester with a tight budget, but a good enough budget and we’re leading the Championship.

The difference between Brookes and Bridewell on track is minimal, and that is clear to see with the pair battling it out over the previous few races, but Brookes has come out on top each time. 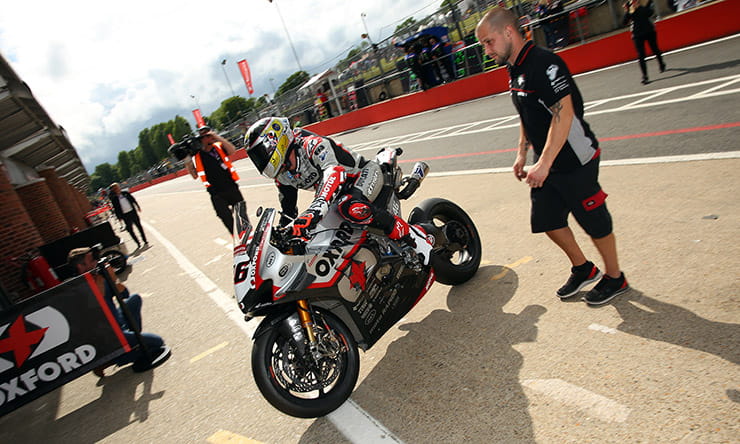 And the 30-year-old former British Superbike Privateers Cup Champion admitted that he feels Brookes’ updated swinging arm from the Italian factory could be making that difference.

Although he told BikeSocial that team principal Steve Moore has put an order in, Bridewell admitted there was a slight delay in the Winchester outfit taking delivery and joked that now he was leading the title race it should be free of charge to his small team.

“I think we’ve got it on order, I don’t quite know what the delay is, were probably not factory enough,” laughed Bridewell. “We’re leading the Championship now, so I want one for free the tight f*****s!

“No I’m only joking, I think to be honest a couple of rounds ago I felt like I didn’t need it, now I still don’t feel like I need it because they have got it and I’m in the middle of them again.

“But I feel now maybe is the time where we are looking for that little bit and we need to turn over every last stone to find that, and if it is that swing arm then so be it, it’s going to cost that little bit extra but we’ll make it happen.”

But whilst the team await delivery of the upgrade, the Devizes man expressed that he wasn’t sure if it was the swinging arm that is making the difference for Brookes at this current moment, adding that there is nothing spilt the pair on track. 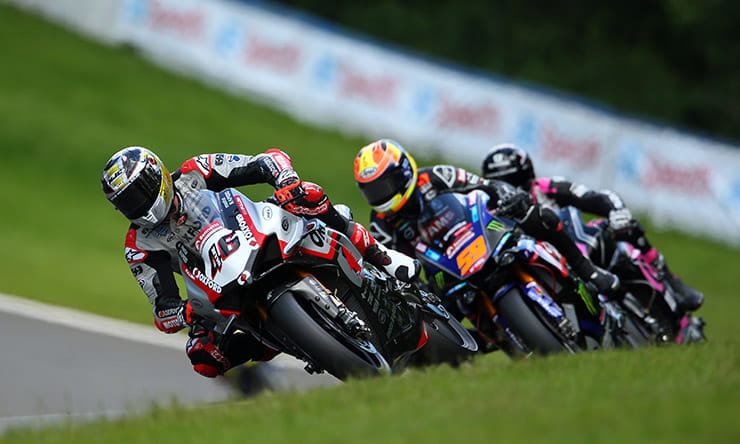 He went on to admit that he was scratching his to find the little extra it takes to get ahead of the former Champion to take his first victory of the year.

“I don’t know, that is the hardest part about it, but in the same degree I guess if the shoe is on the other foot, where do they?

“The biggest difference that they have got is the new swinging arm, I cannot be certain that it makes any difference but maybe if we put that in soon maybe it will give us that extra little bit, I really don’t know.

“It’s very hard, because when I was behind Dan for example there is strong points of his Yamaha, but there were points when my bike was a lot stronger and I could get past him a lot easier.

“But when I’m riding against Josh and there is nothing in it, what do you do? Like I said he had track position on me and that is where I feel he got the win.

“I was thinking to myself in race two, ‘come on Tommy, just give everything, stop being a t**t about it go for the win, all in.’ 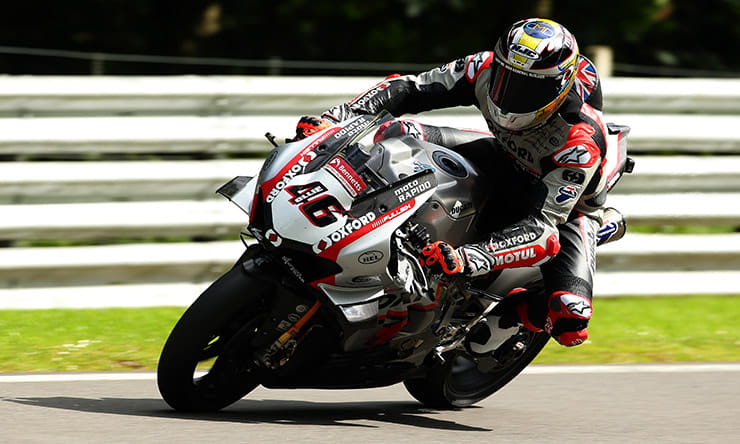 “I rode like that, I was losing the front, losing the rear you can’t imagine the demand I was putting through that bike, there was nothing left, absolutely nothing left for the track conditions, that is why I am happy with what we’ve come away with.”

Bridewell leads the way in the standings with an increased points gap over Brookes and his team-mate Scott Redding, but he told BikeSocial the pressure of being Championship leader doesn’t affect him.

“I couldn’t care less but the problem with it is that the shoe can be on the other foot very quick.

“One race you could be third in the Championship, the next you could be leading it by 10 points so ultimately it means not too much at the minute, but it’s just nice, of course it’s nice.

“But what is nice about it is I’m riding at the very top of my game, the team are working at the top of their game and that bike is working phenomenally.

“People are probably saying that ‘the Ducati is a strong bike’ but gospel honest truth I think you have three of the strongest riders on the grid, riding at the top of their game pushing each other harder than ever on a strong bike so it’s going to look good, so we’ll see.” 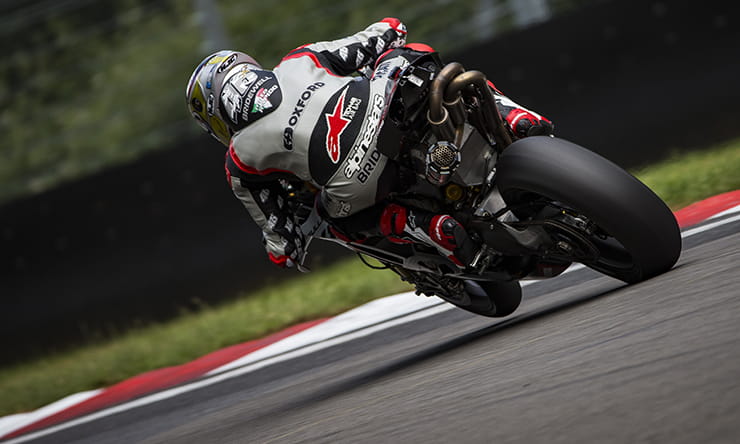 The next round of the Championship sees Bridewell and the rest of the Bennetts British Superbike Championship head north of the border to Scotland, and the tight and twisty Knockhill circuit.

And Bridewell knows that the hard work isn’t over yet, it’s only just started, and he admitted he’d be happy to walk away with a solid-points haul after missing the test there as the 30-year-old was travelling back from the Jerez round of World Superbikes.

“Knockhill will obviously be a lot tighter, it one of those scratchy types of circuits and if I’m honest I’d be happy to come away from there safe.

“I’m going there to win, but it’s one of those places that you if you’re getting the wins then great but if you’re struggling on track then people are lunging at you, trying to take your handlebars off and it can be a hard weekend, so we’ll see how we get on.

“From what I understand from the test that the Be Wiser Ducati wasn’t brilliant straight out of the crate so I think we have a little bit of work to do, but that’s fine we can do that.” 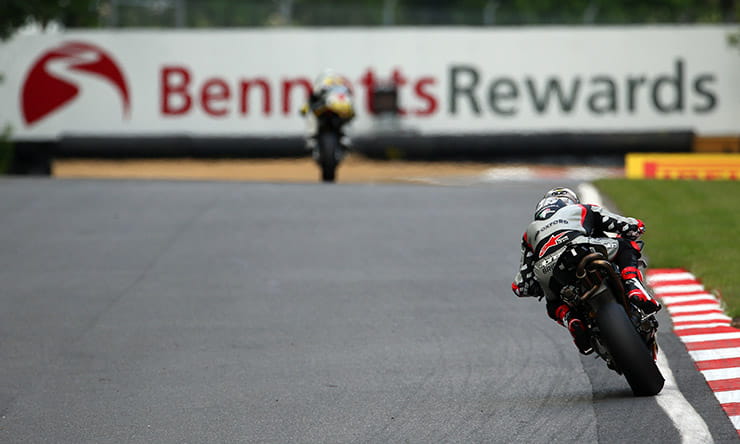