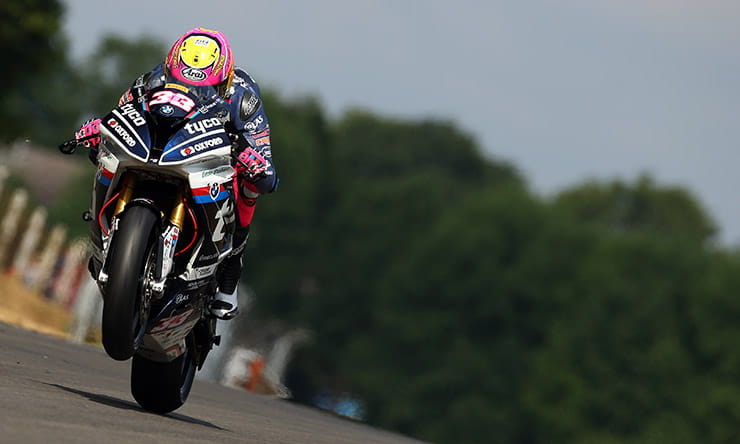 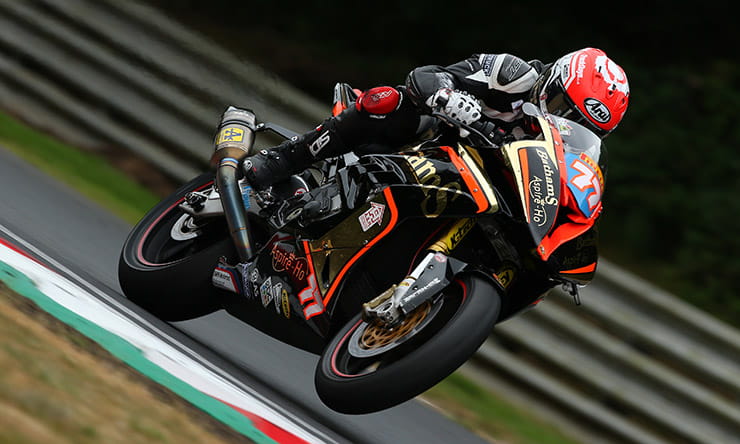 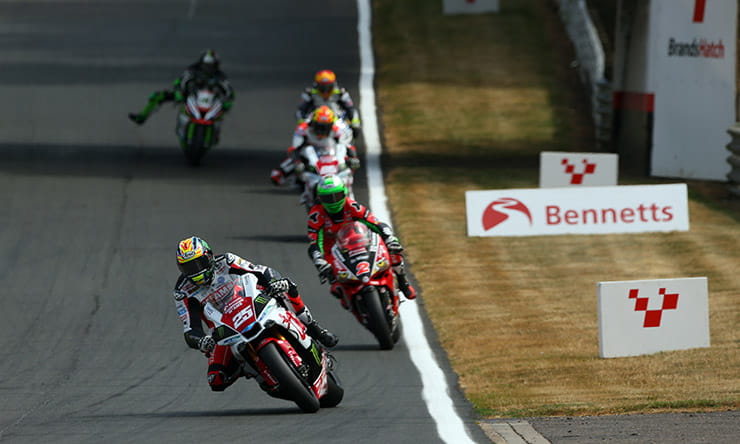 After another short break in order for the fastest road racing men in the World to pit their wits against each other on the Isle of Man, the Bennetts British Superbike Championship roars back into action at Brands Hatch and its full 2.43-mile Grand Prix circuit layout.

As usual BikeSocial has all the information you’ll need ahead of the weekend, with facts, figures and ammunition to keep you well ahead as round four kicks off in the ‘Garden of England,’ at the spiritual home of BSB.

First of all let’s remind you of the results from the third round at Donington Park, but to be honest it would be difficult to forget. Be Wiser Ducati’s Scott Redding bagged the hat-trick of victories, giving him the Championship lead as he walked away from Derbyshire a happy man.

Xavi Fores was the surprise package leaving Donington with three visits to the podium, meaning he’s now sneaked into Showdown spots, with Tommy Bridewell and Tarran Mackenzie also visiting the podium to enhance their Showdown chances.

The first visit to the home of MSV-R, Brands Hatch, in 2018 saw some of the most exciting racing we saw all year, with Josh Brookes doing the double in special Yamaha anniversary colours.

The Australian dominated the whole weekend, qualifying second just behind Glenn Irwin, then taking both victories in emphatic style under sunny skies. Brookes was joined on the podium by Glenn Irwin and Leon Haslam in both outings.

The lap record is still held by the Bringelly man, a 1:24.873, set back in 2017 when he rode for the Anvil Hire TAG Racing outfit, but if the weather holds then it’s expected that record will be lowered this weekend.

The Grand Prix circuit at Brands Hatch is one of the most picturesque tracks on the Bennetts British Superbike calendar, with many exciting viewing spots to set up camp throughout the weekend.

Paddock Hill bend, the opening corner on the track, should be your first port of call to watch all the action from. With plenty of space on the outside of the track, you can pitch up your chairs, sit back, relax and enjoy all the action.

Graham Hill bend is the next best action spot with views of turn one, two, three and the back straight. Then, once the chasing pack have flown past, fans can then turn around to watch all the action on the big screen.

The final exciting spot to see all the action is at the final corner, Clearways, this is where all the action on the final laps could take place. With its natural amphitheatre setting there is plenty of space to set up base camp and enjoy all the action as the races come to a close.

If you are making the trip to the former home of the Formula One British Grand Prix, then here is a run-down of the weekend’s action with the official timetable. (click to download a pdf) 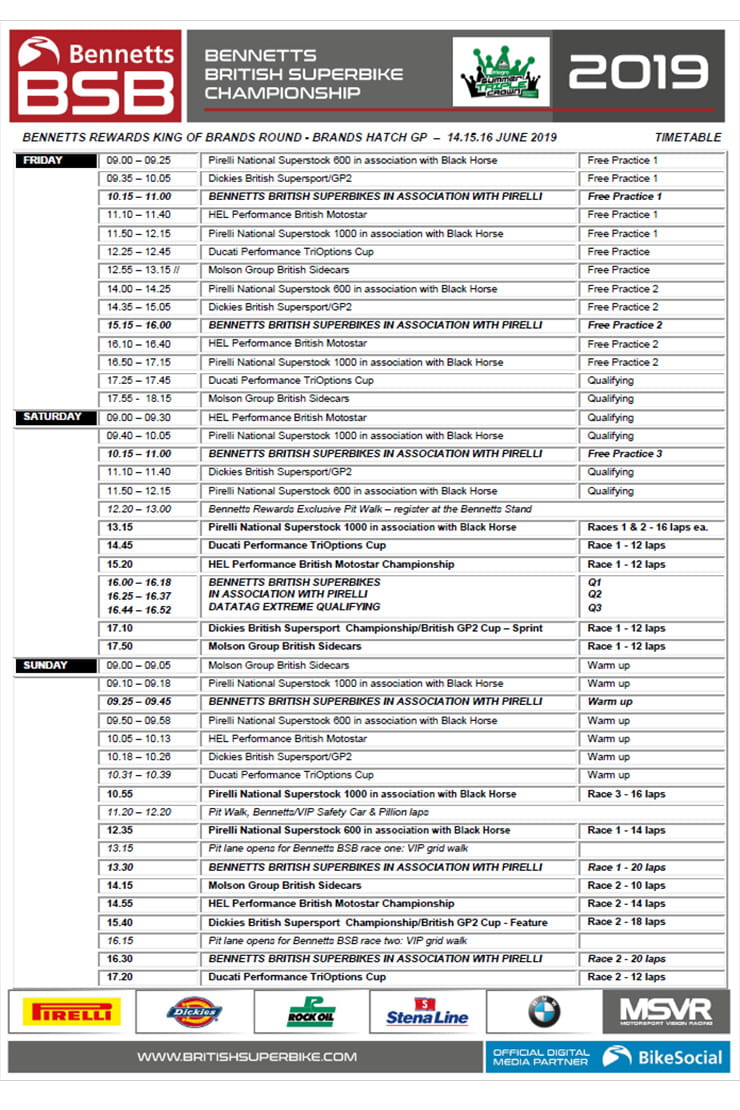 If you can’t make the journey to Brands Hatch then British Eurosport have all the live action covered across the weekend, below is the TV listings.

There are a number of places to grab a bite to eat this weekend at Brands Hatch, so you’ll never be left short during the day. If you are set-up at Paddock Hill bend, then the café just behind the banking is the perfect place to keep feed and watered during the day.

The Kentagon at the top of the paddock near the trade zone is open from the start of the day till 11pm, allowing fans to enjoy themselves after the day is over. There will be bands playing on the Friday and Saturday night for everyone’s entertainment.

There are also two small ‘metro’ style cafés, one under the grandstand at Paddock Hill Bend and also in the trade zone. But as always there will be plenty of independent food outlets around the track.

The main car parks at Brands Hatch are located on the left-hand side of the A20, which is the perfect place to park on arrival, with the main gates just a short walk away. If you are planning to arrive on your bike, the bike parks are located on the right-hand side of the main entrance by the Brands Hatch hotel, and don’t panic if you forget your side stand puck then you’ll receive a free one when arrive. 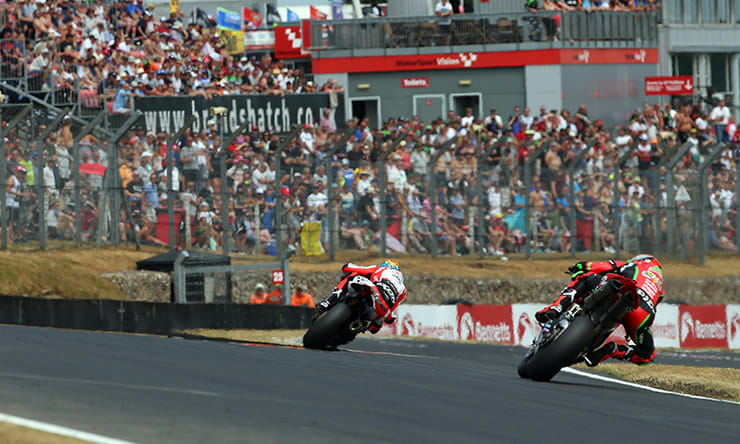 As per normal with Bennetts BSB, the organisers lay on a packed undercard of support class races, and this weekend is no different with a full set of races to enjoy as well as the blue-ribband Superbike class.

So, let’s tell you exactly what is going on in each class, just so you’re clued up ahead of the trip to Brands.

The Dickies British Supersport Championship is back in action at Brands Hatch and we’re set for another cracking two races.

Last time out Jack Kennedy was ruled out of the second race at Donington Park due a hand injury, and it will be touch and go if he’s back out on track this weekend.

Alastair Seeley leads the Championship by 30 points from his closest rival Kennedy, with Brad Jones level on points with his team mate. It could be a three-way battle for the victories in Kent, but if Kennedy is ruled out again, Seeley and Jones will go head-to-head much like they did at Donington Park. 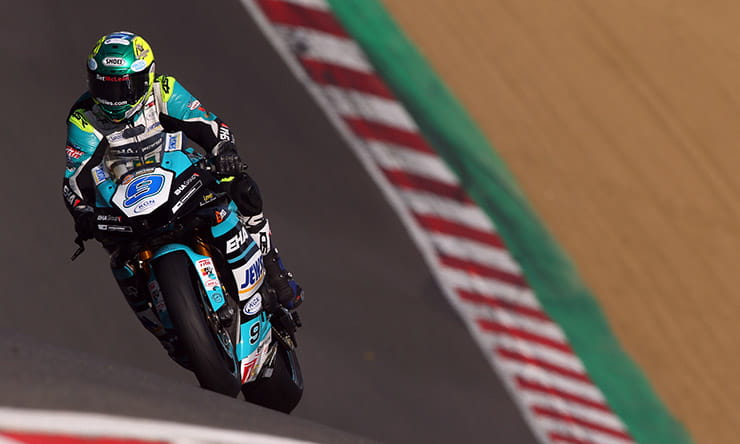 Championship leader Richard Cooper is out to extend his lead at Brands Hatch after a strong performance last time out, but he’ll face stiff competition from local man Alex Olsen and former Champion Taylor Mackenzie who sit 35 points behind the pint-sized Suzuki man.

With two races over the weekend there is chance for the pair to reel in Cooper’s lead, and this will be one of the races you’ll not want to miss at the weekend.

Series rookie Shane Richardson leads the way in the Pirelli National Superstock 600 Championship, only by a handful of points from Aaron Clifford.

Clifford trails the New Zealander by three points, but with Richardson’s domination of the Championship so far in his debut season, you can’t look too far past the Peter Hickman mentored man who will be fast out of the blocks at Brands Hatch. 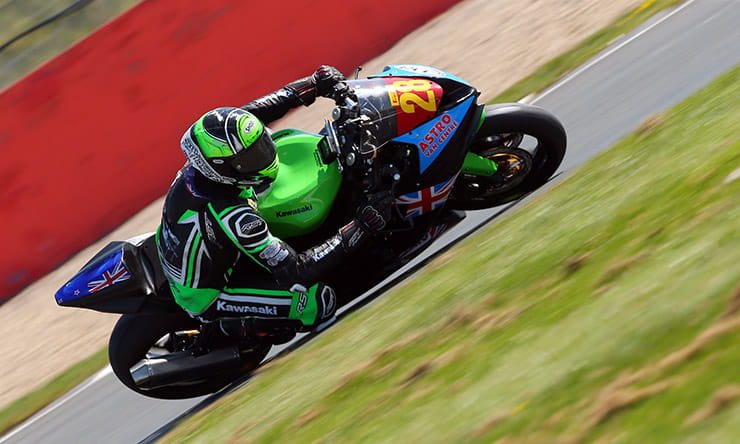 The Hel Performance British Motostar Championship is back in action at Brands Hatch after missing Donington Park due to the British Talent Cup, and American Brandon Paasch is out to extend his Championship lead over Irishman Scott Swann.

Paasch is the man to watch this weekend, and he and his FWP Racing team are ready to go and win again.

The Ducati Tri-Options Cup is back out in force this weekend with Josh Day out to increase his lead over defending Champion Rob Guiver.

Guiver endured a difficult round at Donington Park, but he’ll want to come back out fighting at his home round to narrow down Day’s points lead. Sean Neary will also be a man on the radar after taking his first win of the season at Donington Park.

After a lengthy break from action the Molson British Sidecar Championship is back at Brands Hatch, with TT record breakers Ben and Tom Birchall out for more silverware, with the Mansfield pairing looking to increase their Championship lead.

Kershaw and Clark who sit second in the standings will have something to say about that as they hunt down their first win of 2019. 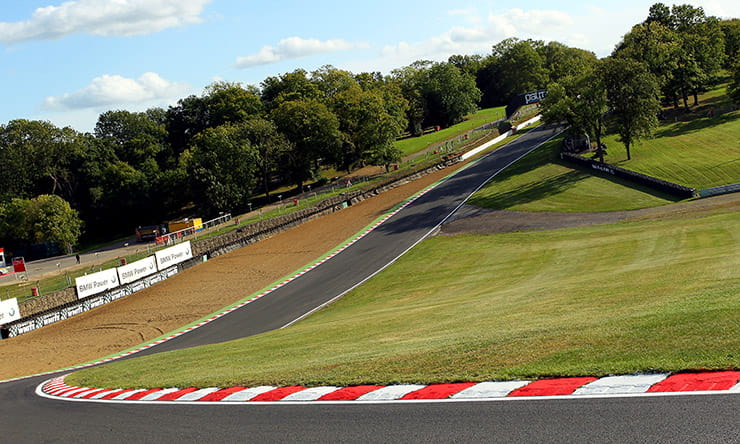 If you want to make a full weekend of it and enjoy the racing in style then hospitality upgrades are available in many different areas, prices start from £49.00 and more information can be found here.

Grandstand seats are available online but can also be purchased on the day, however buying in advance is cheaper. Seats can be purchased from £5 at https://brandshatch.msv.com/BH-19-BSB-1.

If you haven’t secured your tickets yet for the fourth round of the Bennetts British Superbike Championship, then firstly why not? Secondly tickets can be purchased in advance for as little as £28 for a race day ticket, and £38 for a full weekend admission ticket. Purchase yours now from https://brandshatch.msv.com/BH-19-BSB-1.