Brookes: “I feel good about what we can do in the coming rounds” 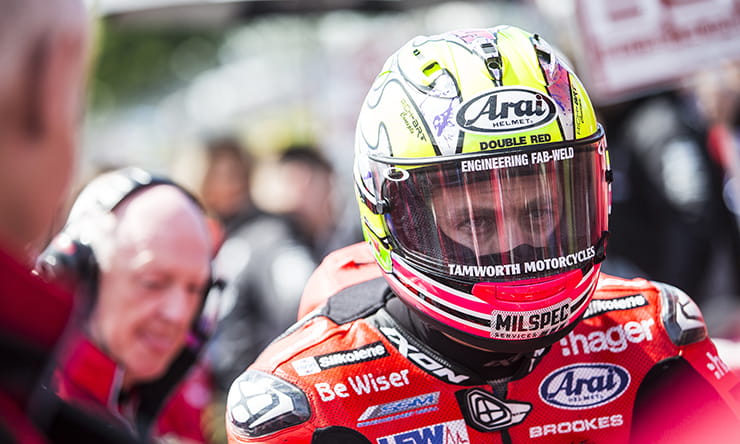 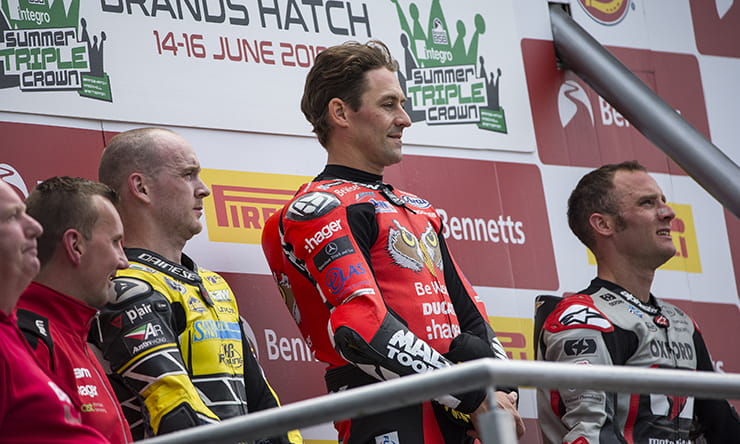 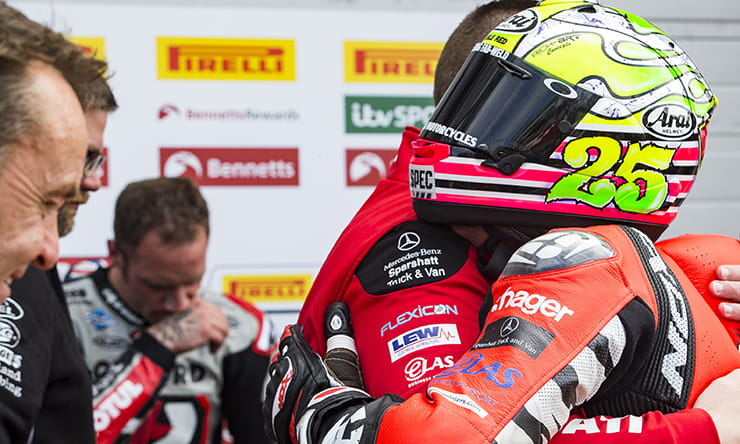 PBM Be Wiser Ducati’s Josh Brookes walked away from Kent with a smile on his face after defending his ‘King of Brands’ title, picking up both victories in Sunday’s Bennetts British Superbike races.

Brookes was the strongest man in the opening race, run in wet conditions, coming back from as far down as 11th, eventually nicking the race lead and therefore the victory from Santander Salt TAG Racing’s Dan Linfoot with just one lap remaining.

Race two saw the Australian clear off from the start on a dry track but he had to hold off the Oxford Products Moto Rapido Ducati of good friend Tommy Bridewell in the closing stages, giving himself his second double victory of the season having dominated proceedings at Oulton Park at Round 2.

But Brookes admitted after the weekend to BikeSocial that his start to the season hasn’t been the strongest, expressing that some of the mistakes he’s made at the start of the 2019 campaign he only has himself to blame for. 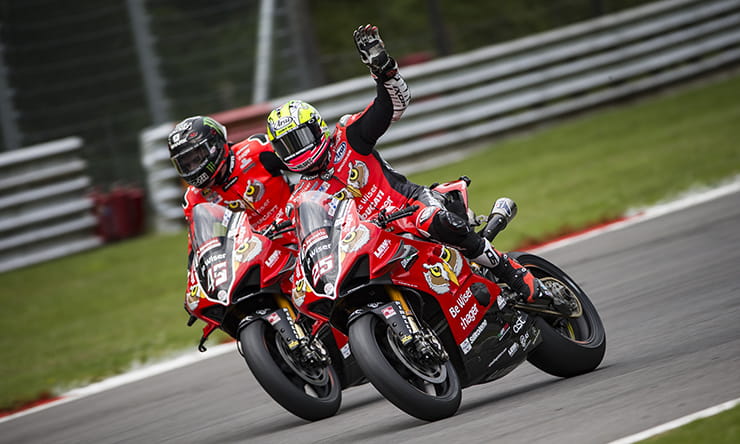 I’ve had an up and down start to the season, at round one I had no points, round two I did the double, round three I fell off in a fairly spectacular way and didn’t get anywhere near the podium and then round four I did the double again.

“So, it’s been a rollercoaster and I feel like we’ve had the speed to do well right from the get-go, but somethings have been my mistake and others have been out of my hands, so I just had to roll with what we had.

“But this weekend certainly makes me feel good about what we can do in the coming rounds.”

Brands Hatch has been a happy hunting ground for the likeable Australian, who now has 14 victories at the 2.4-mile spiritual home of the Bennetts British Superbike Championship.

And he went on to explain why he has had so much success around the GP circuit, admitting that the venue is rewarding when he gets the lap right.

“The place just has a variety of things from the off cambered drop off at turn one into the heavy braking hairpin at turn two, the fast straight then the big fast right-hander of Hawthorne. 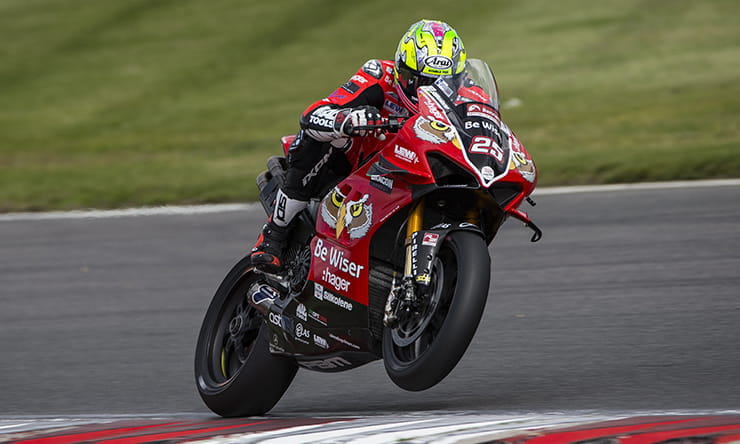 “That is a fourth gear corner and you really fly into there using lots of trail braking, and you’re right on the adrenaline edge of racing.

“Then the following corner, Westfield, is equally as adrenaline pumping of a corner, then you go downhill in to Sheene curve over a blind rise in to Sterlings and it’s really heavily cambered.

“It has a huge variety and the whole way along the lap you’re enjoying it, you have a new challenge.

“The best way I can describe it is like an army style obstacle course, because every step is like another challenge and you’re trying to better your personal best every time. It’s rewarding because it is a satisfying track to ride fast at, so it gives back when it’s going well.”

2019 has seen big changes for Brookes, moving teams, riding and developing a brand-new motorcycle whilst challenging for the Bennetts British Superbike Championship.

After the disappointment of 2018, where he was pin pointed as the man to give Leon Haslam to biggest run for his money, aiming for his second Championship crown with the McAMS Yamaha squad. 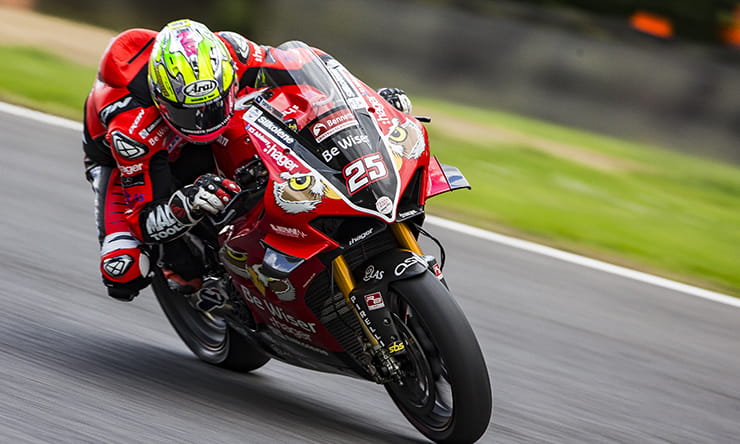 But a string of mechanical issues saw Brookes struggle to show his true form and potential onboard the Yamaha YZF-R1, forcing his hand to move teams for a new challenge with Paul Bird’s Be Wiser Ducati squad.

It’s proven to be the right choice for ‘BadBoy’ who always has a smile on his face around the paddock this year, and now sits second in the Championship standings, just 14 points behind leader Tommy Bridewell, after a cagey start to the year.

And he admitted that the change of scenery, a new challenge and new people around him has made Brookes a much happier rider.

“I think it’s a combination of those things, but first of all it’s the motorcycle.

“So, if I’m with any team, with any crew on any bike and I’m winning then I’m going to be happy.

“But not every day you can win, on those days you need a team behind you that supports you and believes in you, puts as much in to it as you put in to it and I feel like I’m getting that where I am. 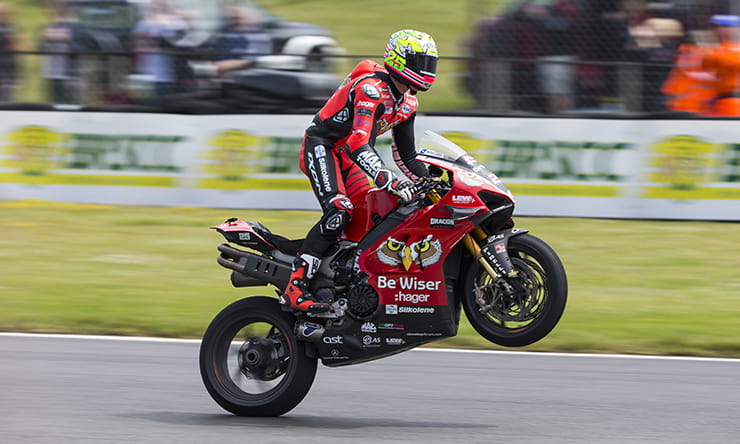 “Even on weekends when we haven’t done so well it stills feels like a close, tight-knit team group and it kind of has that family atmosphere where everyone has each other's back.

“So, then when we are winning it feels even better, you’re really pleased for everybody for getting the results along with me getting the glory of winning the races.”

The weather at Brands Hatch meant that lap records weren’t broken, which was fully expected due to Brookes and his Ducati’s pace from the start of the year, but the great British Summer dictated that.

However, Josh admitted that if the Kent circuit hadn’t seen as much rain as it had in the recent weeks, he could have toppled his record has stood since 2017.

“The record was certainly achievable to beat with the machine that we have got, but this weekend the amount of rain the surface has received over the past week or so, probably even two weeks if I looked into the rain fall, has been horrendous.

“So, it’s hard for the tyres to always get grip when there is so much dirt in amongst the rocks and the stones, and all the good rubber that is stuck to the track gets washed away by the rain.

“Doing laps in the wet shines up the tarmac so the surface feels slippery, and if you get right in to the science of it, it is difficult to do lap record pace on a track in that condition, so I think we’ve all done well to do the times we did.”