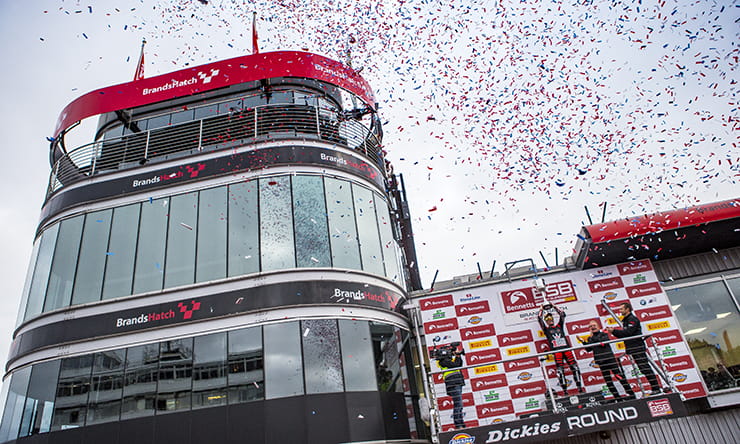 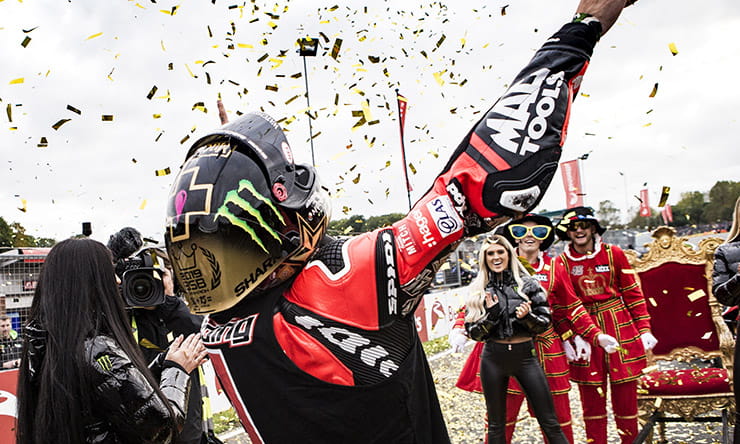 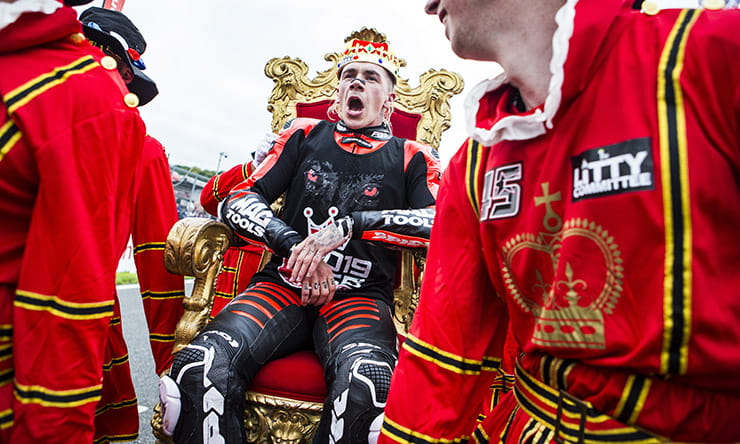 At the final round of the 2019 Bennetts British Superbike Championship, Scott Redding proved his season-long doubters wrong by taking his maiden British title.

Despite his teammate Josh Brookes taking a stunning hat-trick of victories at Brands Hatch, Redding showed maturity in all three races across the weekend, taking two third places and a second to clinch his first British title by just five points.

A lot doubted Redding’s credentials at the start of the season, stating he’d struggle on new tracks and racing machines with no electronic aids, that of which he was used to in MotoGP. But the 26-year-old stood tall and proved them wrong.

The PBM Be Wiser Ducati man was emotional when he chatted to BikeSocial from a joyous Ducati garage on Sunday night, and he admitted that the BSB fans have allowed him to be ‘Scott Redding’ again.

“It’s what we came to do,” said Redding wearing his gold crown handed to him by his team in his victory celebrations on the start finish straight.

“It was the plan before the start of the year and I said I could be Champion, we all believed I could, despite breaking my leg in February. 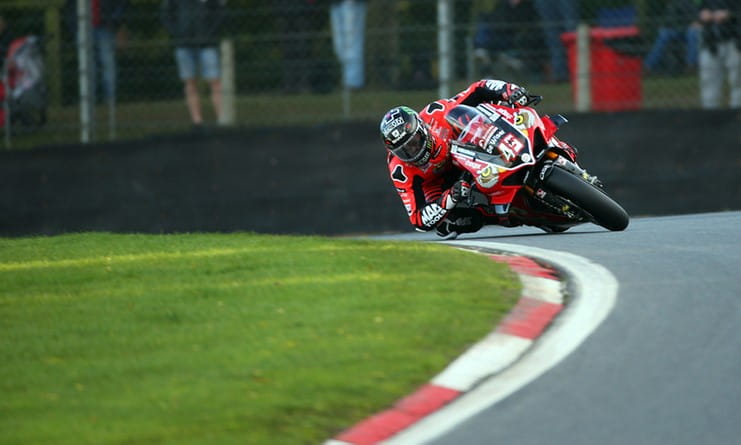 “I kept that very quiet and a lot of people thought I wouldn’t be ready for the season, but I didn’t want to let that stop me by a long way.

“I fought through and came back from it in such a short time to be ready, I did my best throughout the season, my team have been great, and my family management have really let me free this year to be me.

“The fans in BSB have welcomed me in a way that I can be Scott Redding and that has helped me with my riding, and I feel like I have learnt a lot this year.

“It’s not an overwhelming feeling because it was our target to win the Championship, and I believed I could do it, and we did it, but getting the job done at the end was the hardest part.”

It’s been a fantastic year for Redding who won 11 races in his rookie season, taking victory at circuits he’d never seen before, once again proving his doubters wrong.

But the former MotoGP star expressed that he will always have people who will doubt him, and that is what motivated him during the 2019 campaign, adding he’d learnt a lot during the year.

“You’re always going to get doubters, but that motivates me to do better. Coming to new circuits, I knew I could win at new tracks, that wasn’t an issue to me. 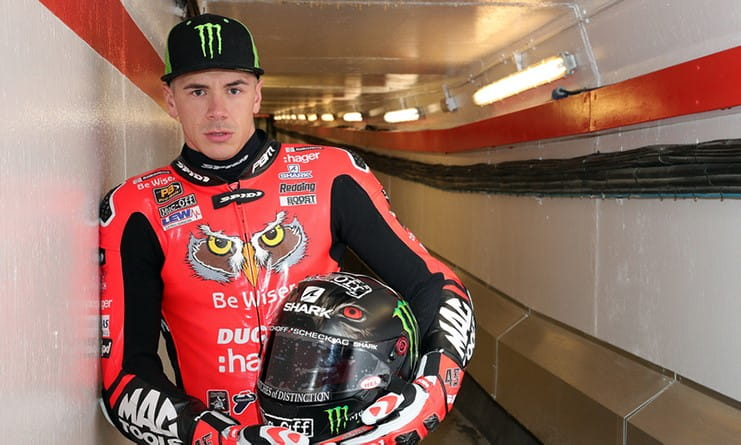 “In my heart I am a World class rider so I know I can overcome things like that, people hadn’t seen that, but now people know that.

“I came here to win the Championship and that meant learning the circuits in the first half of the year, I learnt when I used an intermediate front tyre at Brands earlier this season, that was me learning.

“You can only win the Championship in the Showdown and we couldn’t have done it any better if we had tried.”

Redding joined the PBM Be Wiser Ducati squad at the end of a terrible year in the premier class of racing with the Aprilia factory team, with lifelong supporter Paul Bird taking a huge financial gamble in order for Redding to win his seventh British title as team owner.

And the Gloucestershire-born man admitted that he had a lot of weight on his shoulders heading into this season, knowing he had to prove himself a rider to the onlooking World.

“To be honest, I came here with the best team and a lot of weight on my shoulders to prove myself as a rider.

“I came here to show to the World that I am a World class rider, so I had to do that, I had to impress, and I had to show that with my racing knowledge and in my racing on track.

“That is why I have earned myself a World Superbike ride at the end of the day. I didn’t think I had bitten off more than I could chew, I knew it was going to be hard, but I knew deep inside that if I stayed dedicated, I could win the title.” 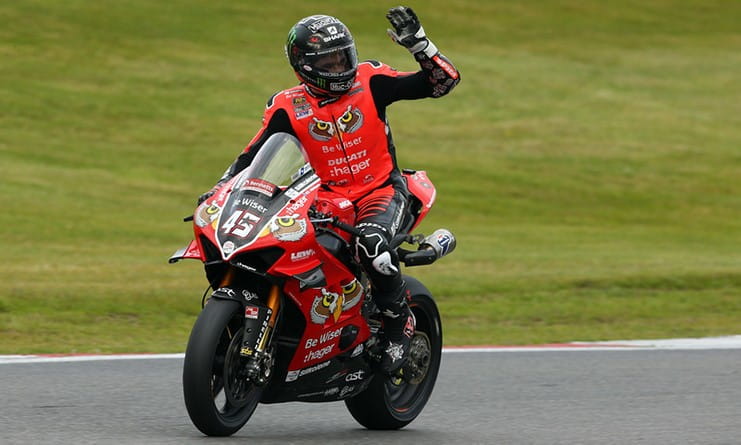 Redding waving to his adoring fans on Sunday evening

2019 seems to have been the year that has reformed Redding, the man who looked a disgruntled figure at the end of 2018.

He was depressed, out of a ride in the MotoGP paddock where he had grown up as a boy, but deep down he believed he could still win races, even if he was at the point of quitting racing for good.

But he admitted that his season in the Bennetts British Superbike paddock was just what he needed.

“We come racing to win, we’ve won races and we’ve won a Championship that for me is why I go racing.

“Not for money, fame, all the other b******t, I’m not about that, I want to win. That is why I stepped in here to show myself, to put myself back in the shop window, to have a bike to win in World Championship. I took the gamble and it paid off, and I feel very good about next year now. 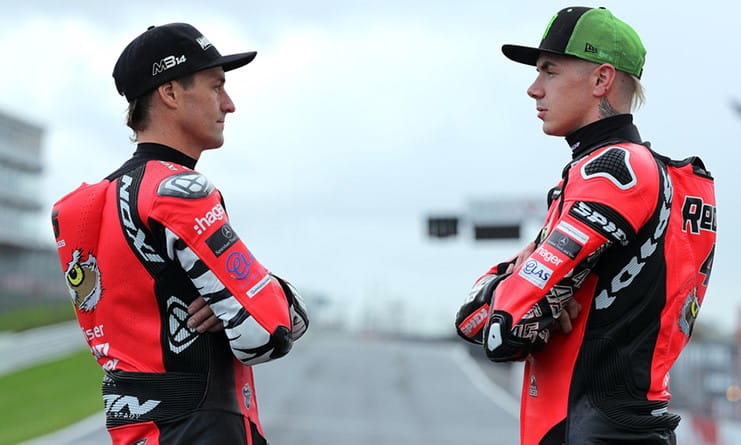 It came down to the two teammates for the title battle

“To be honest the last few years have been really difficult, and the Aprilia year just wrote me off, I was over it.

“Mentally I struggled a lot and I was going through a little bit of depression. Deep down I knew I could win but I couldn’t show it, and when I spoke with my manager I told him to find me a team, and a bike, that I could win with.

“They are big words to say to someone who has been there for you, seen all the ups and downs and almost win a World title. I believed it when I said it, and this weekend we did it.”

The now Bennetts British Superbike Champion looks a more mature figure, and that was clear to see in Sunday’s opening race where he and Josh Brookes battled it out.

Redding took the lead with one lap to go, but the ‘Badboy’ bit straight back pushing Scott out wide, and from that moment on he held back, cruising to third place and more or less securing the crown.

And the now World Superbike star felt that his season in Britain has made him more mature, but it’s also made him feel his old self again, something that all motorcycle racing fans are glad to see.

“It’s matured me, but it’s also brought me back in years I feel, I’ve had so much fun. But you know what, in race two I wanted to win that.

“I said to myself in hospital with my broken leg, ‘if you’re winning a Championship, you’re going to go and win the race, regardless,’ because that is where I lost out on the Moto2 title, I got very protective of the points.

“So, I thought in race two ‘I’m going to win this race, f**k it.’ I had a little battle with Josh, but then I thought about the Championship, which gave me an even bigger cushion to allow me to finish fifth in race three if I needed it.

“But I have just enjoyed every minute of it this year.”

Ready to celebrate with his team, family and friends at Brands Hatch, Redding was eager to party hard into the night, but it only seemed to fair to quiz him on 2020, a year in which starts much earlier than anyone expected for the British Champion.

Yesterday, he flew to Spain for two days testing with the Ducati European test team at Valencia, where he will get his first taste of his new machine for next season.

After the race weekend he said, “I fly out Monday morning, I’m looking forward to it though. We’ll party hard, suffer on Monday morning and then get back to work on Tuesday and Wednesday, that is what we do.

“We come here to work hard, we want to be successful, but I want to enjoy it as well. I have done my job the best I could, I have won it as a rookie, and I think I have made history with that. But I’ll go to World Superbike, get my head down and try and win a World title.

From us all here at Bennetts and BikeSocial, congratulations Scott Redding on becoming the 2019 Bennetts British Superbike Champion.