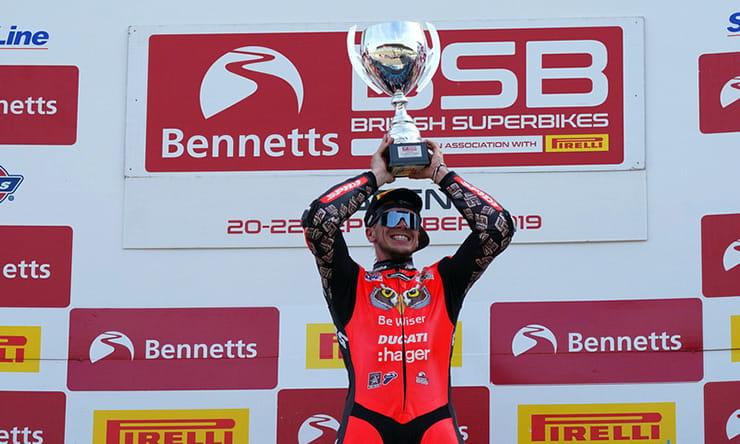 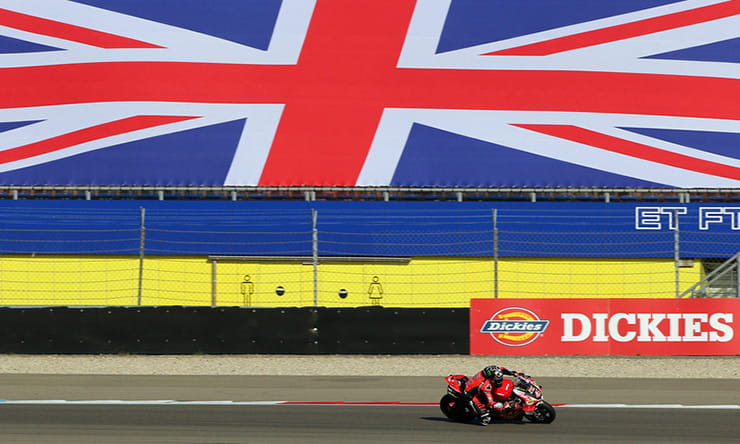 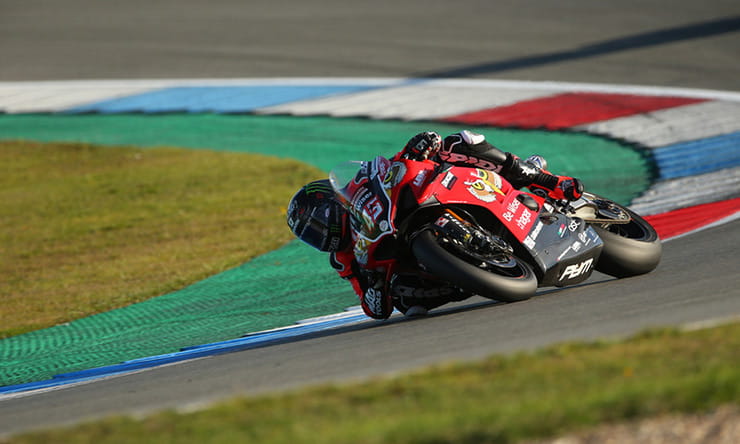 PBM Be Wiser Ducati’s Scott Redding walked away from the opening round of the 2019 Showdown with a 14-point lead in the Bennetts British Superbike Championship following his double Dutch domination.

Redding led the way after every free practice session, grabbed pole position with a lap eight tenths of a second under the lap record and took both victories on Sunday afternoon.

The Championship leader ran away with the opening race win, grabbing the holeshot and riding in a league of his own to cross the line with a four second gap over teammate Josh Brookes.

However, in race two Redding was forced to work for his victory after battling with Brookes, Tommy Bridewell and Danny Buchan all race long, but he would ultimately shine through to take his ninth victory in 2019.

“I’m really happy, I was happy with the way we worked and the way that the team worked,” said Redding when speaking to BikeSocial on the top table in the Assen press room.

"We broke the lap record, pole position and had two race wins and I was very consistent in myself so I can’t take anything away from me and the team, we did great.

“We did what we came to do and that was to try win, so I’m really happy we have come away with that in my pocket on a track that I know, and I’m looking forward now to the last two rounds.” 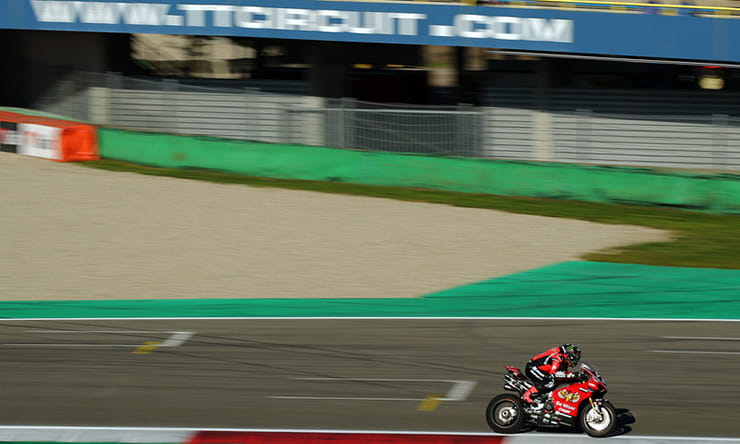 Above: Scott looked unstoppable after the opening two laps of free practice one

It was clear from the outset on Friday morning that Redding had his eyes on outclassing his opponents at the Dutch track, pulling into pit-lane after a chilly first free practice four tenths quicker than Xavi Fores, and only two tenths off the outright lap record.

But the former MotoGP man would then stun the paddock just a few hours later by dipping under the record by three tenths of a second, laying down his marker for the weekend.

Although he admitted after the weekend that he didn’t know what the lap record was, because he hadn’t considered it after struggling to reach others throughout the year.

“So, I hadn’t really considered it, then after FP2 on Friday the team told me I was under the lap record, I looked at the times and I was two tenths off on lap three of FP1.

“And that was like MotoGP, we’d get to a track that you’d know and you’d be straight on the lap time, but this year I have had a rucksack on for a few sessions just learning the tracks.

“But going to Assen just shows the quality that I do have as a rider, and that is what Aruba Ducati have seen in me for next year, this was a good weekend to show what I can do to myself, and everyone else out there.” 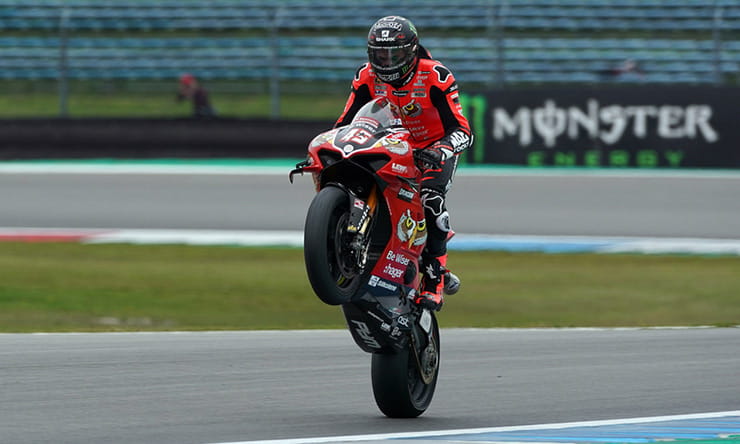 Above: Redding put a show on for his Dutch fans

Assen was only one of a handful of circuits that the 26-year-old had seen before his rookie season in Bennetts BSB, and it was clear to everyone that his previous experience in Holland would be the dominating factor.

But Redding added that his experience was a strong part of his success, but he expressed that his PBM Be Wiser Ducati worked perfectly which helped him along the way to his double Dutch victory.

“I have ten years of experience at Assen, so it was easier for me to be fast and the bike felt good straight away.

“When I was there with Aprilia, the bike wasn’t working but now I have a bike that is working, I can do what I really want to do as a rider.”

Redding had the better of his teammate, and closest challenger for the title, Josh Brookes at Assen, with the ‘Badboy’ in his shadows for most of the weekend.

But he quickly quashed the fact that he may have his teammate worried as they head into the final two rounds of the Championship, and admired Brookes’ determination to beat him in the second race on Sunday. 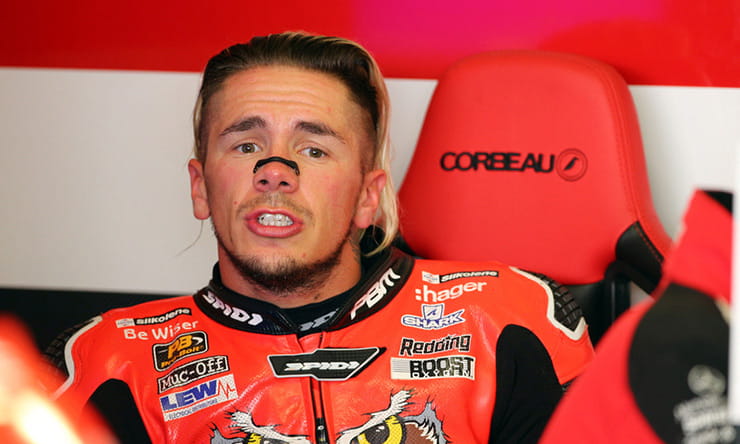 Above: All eyes are now on the final two rounds of the Championship

“Either way if it’s nice or not I just had to keep putting the pressure on him, he pushed it out there in race two and tried to break away, I thought I can’t let that happen.

“I closed the gap and he was on the back of me for quite some time, and I was putting some pace in. I thought fair play if you come down to the last lap with me we are going to have a dog fight, fair play.

“But I think the pace was just too much at one point, he just had to give up the fight in the end and that is what we have worked on strong.

“That is probably my experience coming in to play on a track that I know, where I can be consistent and get those lap times just one after the other.”

It looks set to be a battle royal in the final two rounds of the season between the two teammates, with Tommy Bridewell waiting in the wings to collect the pieces if drama ensues.

But, with the weather probably ready to take a turn for the worse in typical October fashion, Redding is cautious that his lack of wet weather riding could hinder his progress. 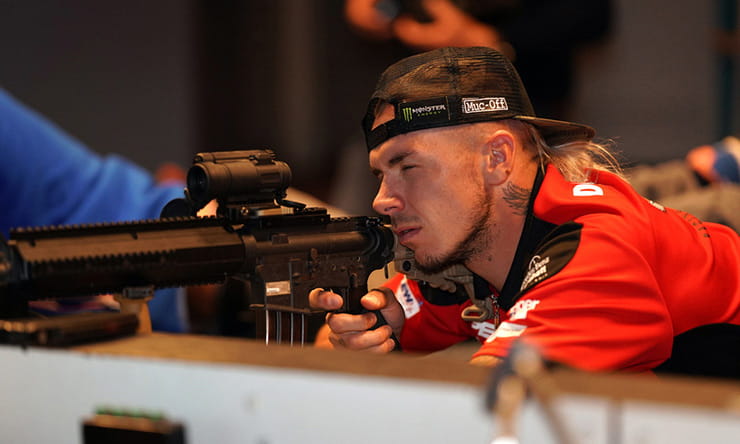 Above: Scott has his sights set on his first British title

“That isn’t really what I want, I don’t want any wet weekends because I still haven’t really done any wet weather riding.

“Knockhill was a good step for us, but it’s just not great to race in the rain. It would be nice to have it dry so we can push for more wins. If it is wet we still have a lot more work to do and it could be damage limitation in that case.”

With a 14-point lead in the standings and his confidence brimming Redding looks unstoppable in his pursuit of his first British Superbike Championship crown, but he isn’t taking anything for granted, something in which he has learnt from in the past.

“I’ve looked at it that way in the past when I was in Moto2, and I started to ride a little bit more conservative and I’ve learnt from that lesson.

“I think of myself as a clever rider, I know if I am way over my limit and if it is worth the risk or not, and that is where if it does rain I will need to weigh up my options, but if it is dry I am always going to try and push for the win because that is what I am here to do.”