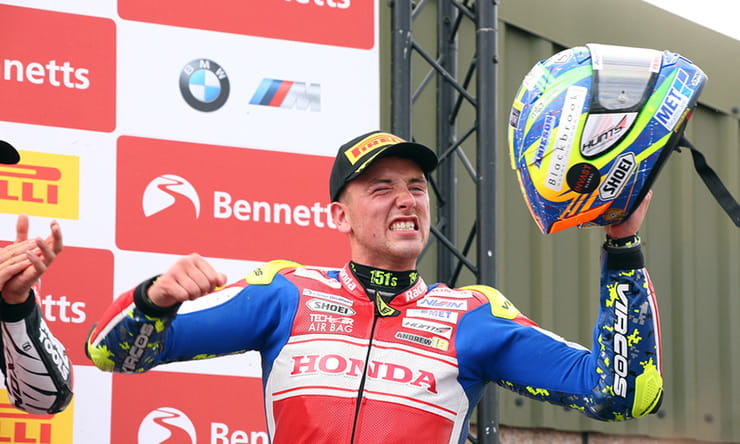 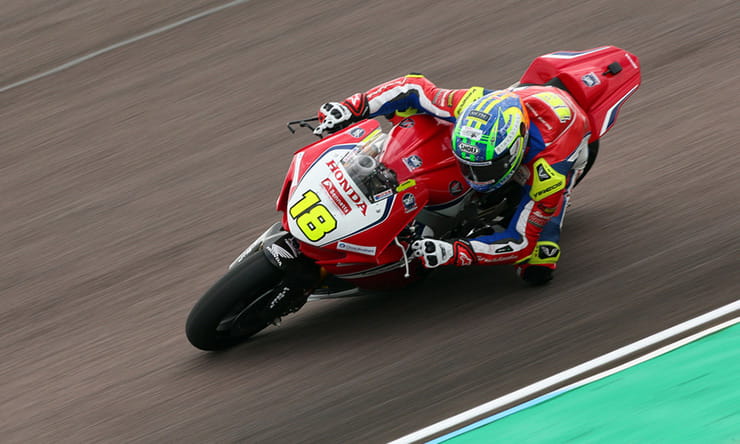 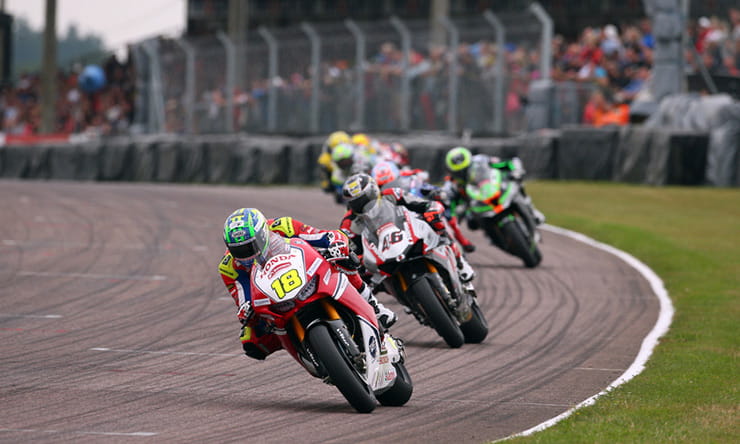 Honda Racing’s Andrew Irwin was delighted to walk away from the seventh round of the Bennetts British Superbike Championship as the sixth different winner of 2019.

Irwin took victory in Sunday’s opening race after swapping paint with Jason O’Halloran, Scott Redding, Christian Iddon and Josh Brookes in the later stages of the race, but the Northern Irishman did enough to hold on to his first BSB win.

Iriwn then backed up his victory with a strong second place in the twice red-flagged second race, proving that the work he and his Honda Racing squad did in free practice paid off.

But the younger brother of BSB rider Glenn, and motocross legend Greame told BikeSocial from his pit-box before the Honda Racing team photo that his success won’t go to his head ahead of the end of season run-in.

"I'm really happy with how this weekend went, I can't thank the whole team enough,” expressed the always smiling Irwin.

“Race one was the dream, we did the fastest lap of the weekend and we won the first race, then came second in race two. I'm really enjoying my racing, I always say when I enjoy it I have good results. 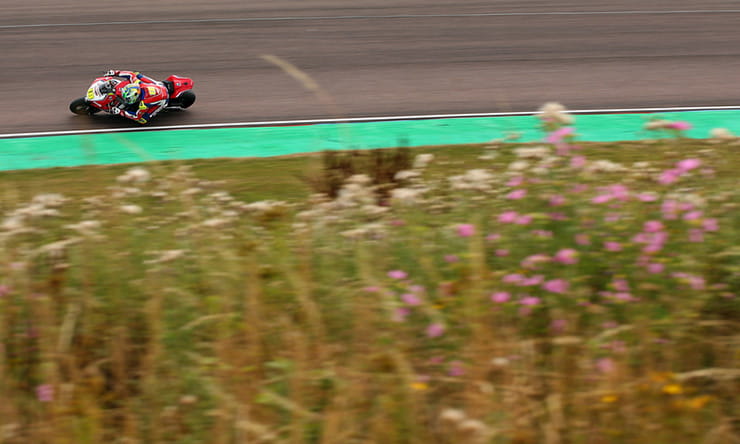 Above: Irwin produced a large string of race runs

“I just want to keep it fun, keep enjoying it, not take it too seriously. Don't get me wrong I put everything in to it but also, I can let my hair down.

“It's been a weekend that I never thought was going to happen, to get the Honda back on the top step of the podium is really good, and a nice feeling.

“I can't wait to carry on the rest of the season with the same momentum, I want to be in the top six and that's the target we're going to take to Cadwell.”

The former World Supersport racer quietly went about his business over the three days in Hampshire, producing a number of race runs on the softer option SC0 rear tyre.

Culminating in a 12-lap run in Sunday’s morning warm-up, in which he finished the fastest of the pack, making many of his fellow racers sit up and take notice of what he could potentially do.

But even Andrew admitted after the weekend that he was surprised with his strong pace, and even more surprised with walking away with his first victory in his short, but impressive BSB career.

"This weekend we did loads of homework, it wasn't as if I just came here and thought we'd be ok, I never once thought that.

“On Friday I did race runs in all of the practices, then again Saturday and Sunday morning, and it was then that I thought we actually had good pace there, and that gave me the idea that we could actually do a good job. 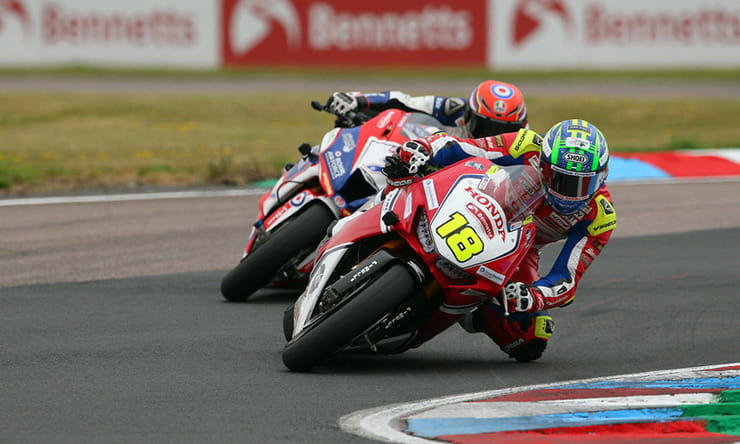 “Sometimes you just have to believe in yourself, and that’s what I did. Whenever we get a good lap time and good consistency, I've always got something in my head thinking I really can do this.

“It’s a massive thank you to the whole team and everyone that's been behind me.”

Irwin joined the Bennetts British Superbike Championship mid-way through the 2018 season, replacing the injured Shane ‘Shakey’ Byrne after his horrific accident in a test at Snetterton.

The 24-year-old made the decision to step away from his ride with Simon Buckmaster’s squad in the World Supesport Championship, and immediately he clicked with the big bike.

The Carrickfergus man impressed with a string of strong rides during the half season he had with Paul Bird’s team, which earnt him a deal with the factory Honda squad for 2019.

But Irwin paid homage to his Honda Racing teammate, Xavi Fores, who has helped Andrew with his riding but also helped transform the notoriously difficult CBR-1000 Fireblade.

"I've only been racing in Superbikes just over one year, and we've had a really good season so far and done a really good job, I feel. 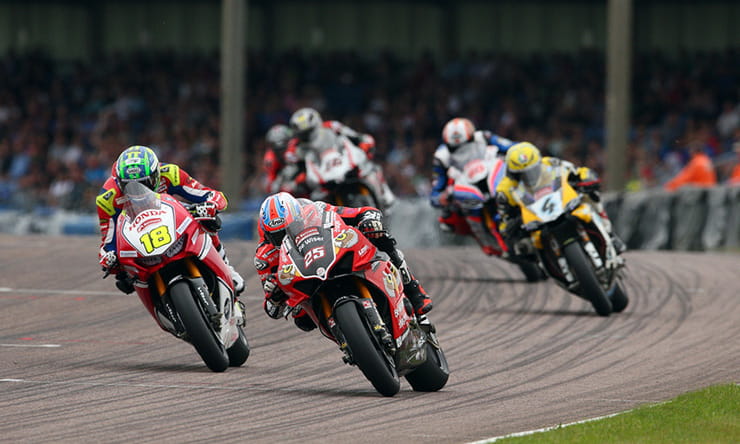 Above: Brookes got the better of Andy in race two

“It’s also credit to Xavi, he's been a massive help for us. The thing here is having an experienced teammate you have a lot to learn. I think I have youth on my side, I'm excitable and not scared but with Xavi's experience it’s helped us to develop the bike.

“Here we all work as one, so he's helped us to take the bike to the next level. So thanks to him, along with our crew chiefs I feel like we're all going in the right direction.”

Fores’ switch from the World Superbike scene for 2019 has been somewhat impressive, with the Spaniard holding a top six spot since his triple podium at Donington Park back in May.

But Irwin admitted that having a teammate with all the experience that Fores has, has been valuable to his development and the team.

“When you have someone like that in your garage, you know you haven't got a clown next to you, you've got someone who knows what he's talking about and when he's talking I listen and try to gain as much as possible.”

Irwin hasn’t been afraid to show he’s made of in 2019, putting hard moves in during races as he scraps for every last point in his quest for a Showdown spot.

He has had dealings with Scott Redding at round one, and last weekend was no different for the former British Supersport runner up.

He swapped paint with Peter Hickman in the second re-run of race two, almost pushing ‘Hicky’ off the track, before the Smiths BMW man came back past a matter of corners later, flicking the ‘v’s’ as he went past.

But Irwin, who now holds the final top six place ahead of Xavi Fores, admitted that he didn’t see Hickman hand gesture, but added it was nice to beat him on track to the flag.

"To be honest, I didn't even notice that he gave me the fingers, but I realised that he did. In the first lap he hit me, I returned the favour and passed him back clean, but it was nice to be ahead of him that’s for sure.”