BSB | Hickman: “He actually took my bars out my hand” 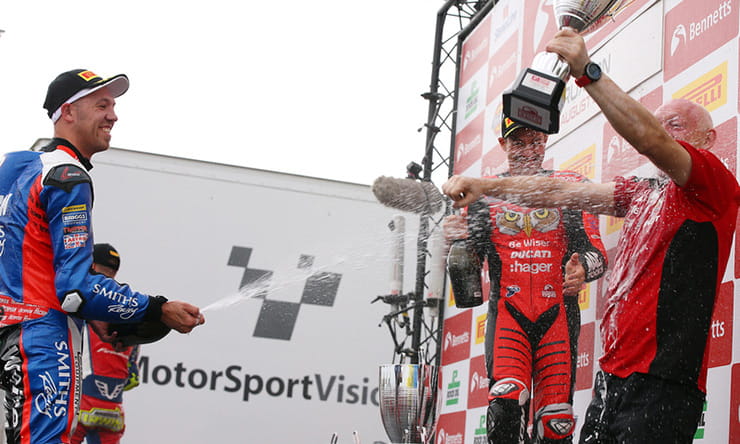 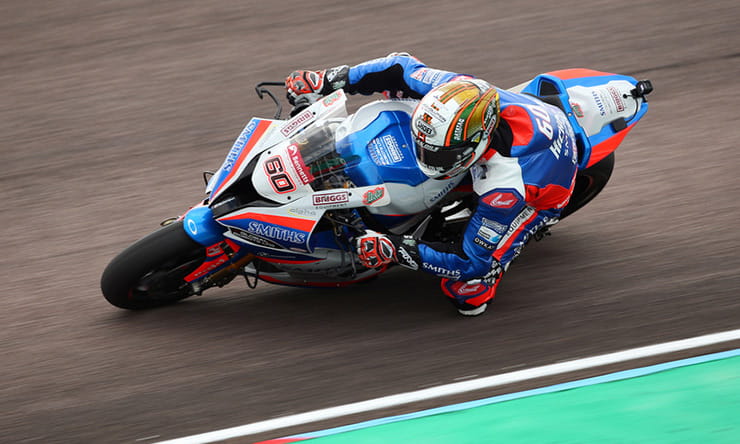 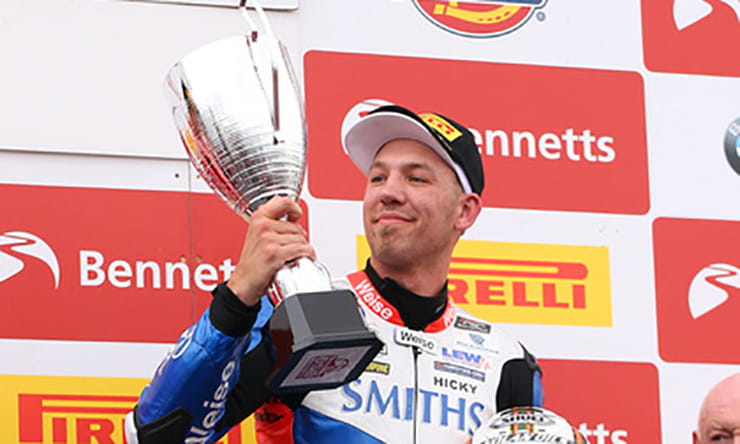 Smiths Racing BMW’s Peter Hickman said it was “ideal” to secure his first podium of the 2019 Bennetts British Superbike Championship in race two at Thruxton.

‘Hicky’ showed strong pace all weekend and qualified on the front row, converting that pace in to a strong fifth place finish in race one, collecting his first podium of the year after a hard-fought battle with Andrew Irwin in race two.

Consistency is key in the Bennetts British Superbike Championship and the Smiths Racing man proves that, by finishing every race this season in the points he now sits just 16 points shy of Andrew Irwin in sixth.

But even after the joy of his first podium of the year onboard the all-new BMW S1000RR, Hickman admitted to BikeSocial after the weekend that it wasn’t the best of rounds for him.

"It wasn’t a mega weekend, but it was ideal. The finish in race one was close but no cigar, I got bolted to another rider right towards the end and it made me lose the gap to the front group, which was where the podium was.

“I felt like I saved my tyre enough, but then I had to use it to get back to them but I only got there by the last lap, and by then it was all a bit too late.

“That’s just the way racing goes though, so I finished fifth. 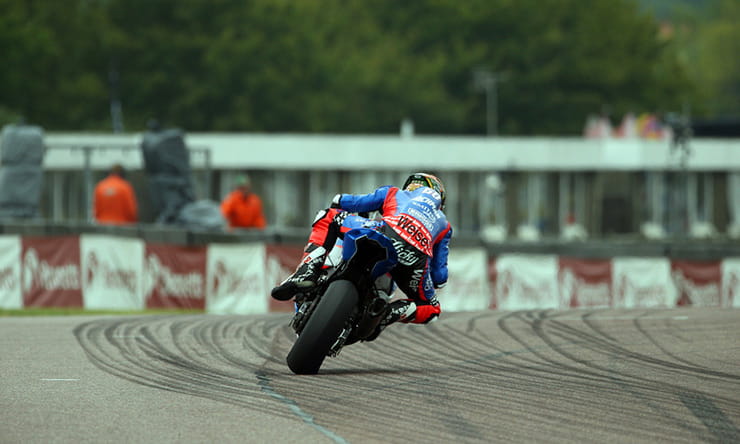 Above: Hicky controlled his tyres well in the races

"Then race two was hard fought eventually, especially it being a shortened race, everyone is on the ball.

“Getting a podium is good but we're just lacking some speed, if I could get some more horse power we'd have been at least second, whether we could compete with Brookes or not is a completely different question.

“The Smiths Racing BMW team did a fantastic job all weekend anyway, and it’s great to get BMW's first podium in BSB on the new S1000RR.”

Tyre life was the issue on everyone’s minds, with some teams doing over three race simulations in practice and warm-up to understand how their bikes would perform under racing conditions.

But Hickman knew heading to Thruxton that his riding style and knowledge of the abrasive surface would play in to his hands.

And afterwards he explained that he, and his BMW, hardly ever struggles with tyre wear issues, allowing the fastest man around the Isle of Man TT course to focus fully on the set-up of his machine.

But the first race saw Hicky struggle towards the end of the race after he dropped back in the pack. 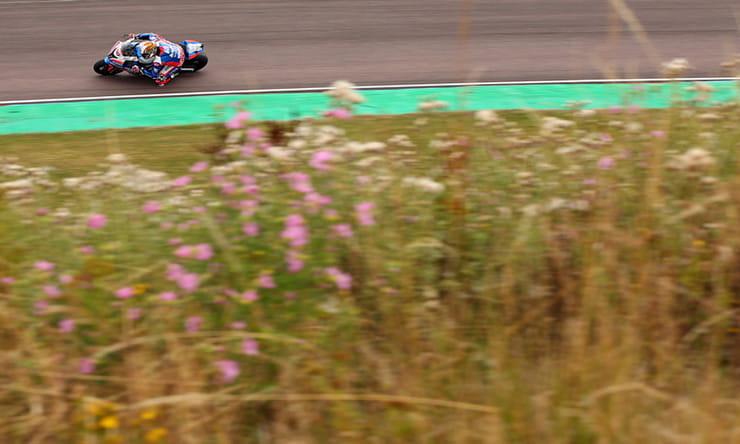 Above: Hicky scored Smiths’ first victory at Thruxton in 2017

"It's something I've never really struggled with, even here I've got the lines that I want to run and I kind of understand where I need to be, and roughly what lap time will get to the end of the race on the soft tyre, and we were pretty good.

“Race one was not as good as I might have hoped, but I think the temperature had gone up quite a lot on the track and we always seem to struggle when the temperature is up.

“In the afternoon's race we were a lot faster straight away so who knows how it would have run if it panned out the way it was going, but it got red flagged.

“That’s the way it goes, it's racing and we just move onto Cadwell now and hopefully move into the Showdown soon.”

The second race was a chaotic affair, after two red flags the race finally ran it course over just eight-laps in order to finish the days racing before the 6:30pm curfew that Thruxton imposes.

After Brookes had shot off at the front from pole position, Hickman and Andrew Irwin battled it out on track for second best, with Irwin putting some hard moves on the Lincolnshire man.

Irwin almost took ‘Hicky’ out of the race with a tough move, but the 32-year-old quickly barged his way back past, flicking two fingers up at the Honda Racing man as he flew past. 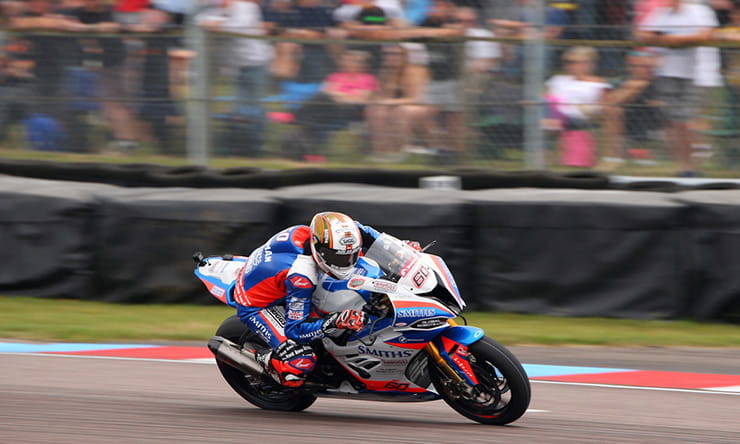 Above: Tyre wear was the talk of the paddock all weekend

And ‘Hicky’ told his version of events to BikeSocial, expressing his annoyance at the force of Irwin’s manoeuvre.

"Nudging is one thing, but he actually took my bars out my hand so that isn't a nudge,” Hickman said.

“I'm sure he will probably see it completely differently, I felt like I had put myself in a position where he could actually see me for the start, and I'd closed the line enough that he shouldn't really have come up the inside of me, but because he got some speed he decided to come through anyway.

“We were still on the bike though, I didn't go down. At the next corner I made sure I got past him and let him know that I wasn't happy about it and that’s the way it goes!

Hickman then joked that taking one hand off the machine at one of the fastest parts of the Thruxton track. He said: "It's 140 mile an hour or so isn't it, it's alright!”

Last year saw Hicky and Dean Harrison go head to head for the victory in the Superbike, Supersport and Superstock races. 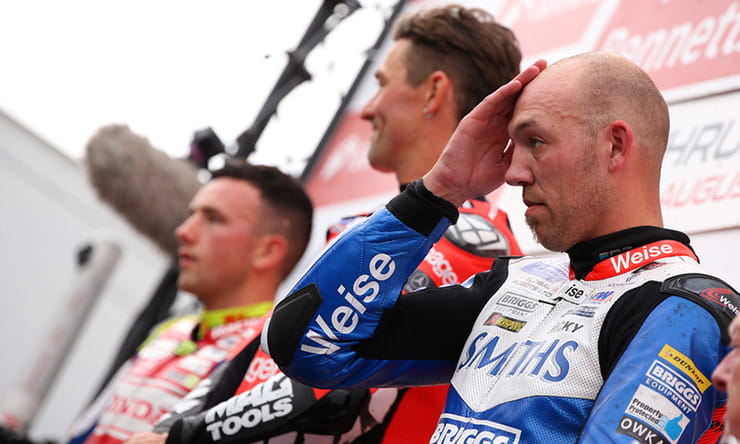 Above: It is the first podium in BSB for the new BMW

Peter and the Smiths BMW took victory in the Superbike race, finishing runner up to Harrison in the Superstock battle.

However, he had the upper hand during the Supersport race, taking victory onboard the Trooper Triumph from Lee Johnston and Connor Cummins.

But what are his thoughts ahead of this year’s eagerly anticipated meeting, well we asked on Sunday just as he was about to leave Hampshire.

"Thoughts are I'm going to miss the boat as today has gone on too long!” laughed Hickman from his empty Smith Racing garage.

“We should be alright, I'm looking forward to the Ulster, we just need the weather.

“It’s all that ever matters really at the Ulster. Looking forward to it though, it should be good for the BMW and the little Triumph as well."

Luckily Peter did make his ferry over to Norther Ireland, meaning he will be ready to once again go head to head with his fiercest road racing rival, Dean Harrison.