Redding blasts harsh moves: “I’m not going to cry about it, what goes around comes around” 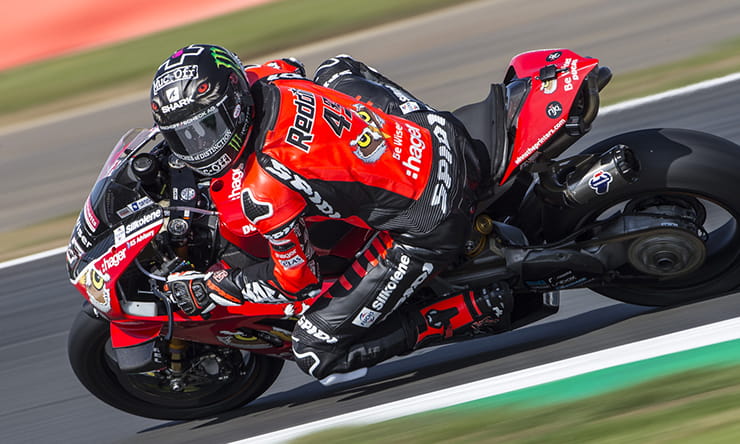 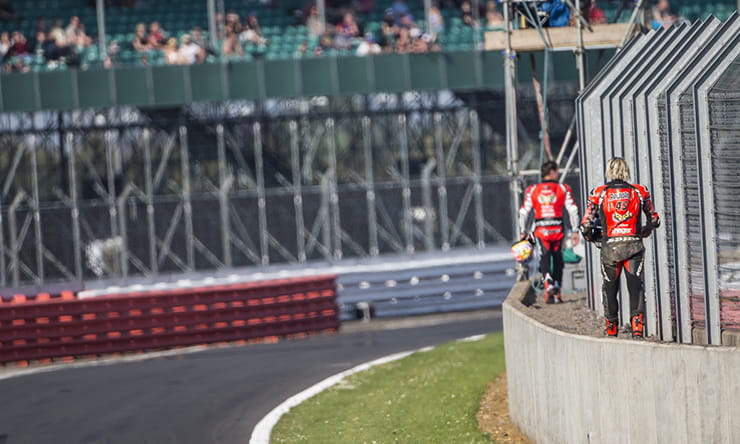 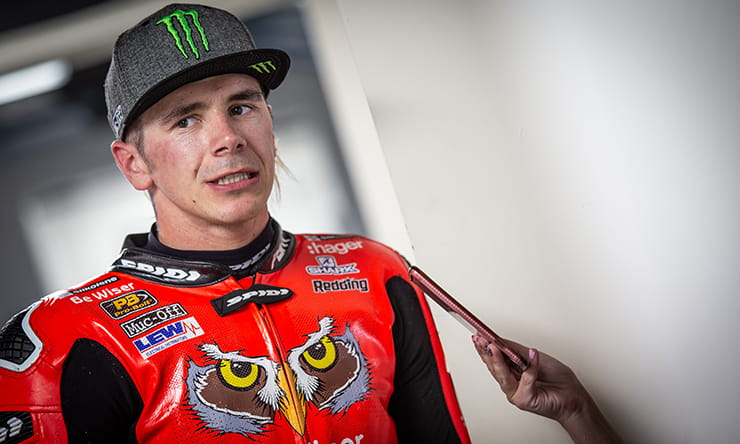 Bennetts BSB newbie Scott Redding has blasted the hard moves made on both him and other riders in the two races at the season opener at Silverstone.

Redding, who collected his first podium of the 2019 campaign in the first race at the home of British motorsport, was taken out in race two by Honda Racing’s Andrew Irwin, and he felt afterwards that other riders are trying to take each other out for their own gain, but he also admitted he loved his first taste of BSB.

“I see in the races what the guys are doing but I’m not going to complain about it,” said a frustrated Redding to BikeSocial. “Racing is racing but it is over the line, I can’t change that though, I’m not going to cry about it, what goes around comes around.

“I see the guys trying to put the other one down so there is one less rider there to worry about to get on the podium.

“In the first race I was quite comfortable, I didn’t see it, but then in race two I saw more of the action. I was battling, which was safe, but I saw a few moves and I thought ‘you are genuinely trying to put another one down’, which is unfair really because the respect is not there.” 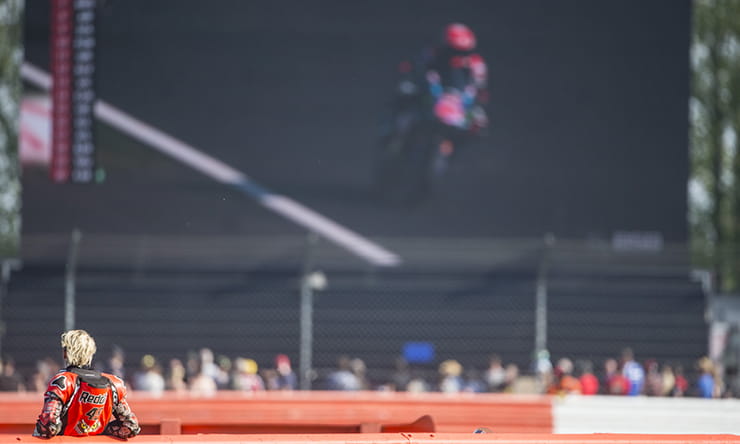 It was the PBM Ducati man’s first taste of Bennetts BSB action after his sensational switch from MotoGP and while Redding expected the racing would be tough and hard, which is what the Bennetts British Superbike Championship is renowned for, he quickly expressed to BikeSocial from his pit-box that there is nothing to adapt to.

“It’s nothing to learn from, I’m quite happy to get into a tussle but when someone just hits you from behind what can you do?

“It’s nothing I can change. I’m not riding scared, I’m happy to get stuck in, I was having a good battle in the race but when someone just cleans you out, what do you want to do with that?

“There’s nothing I can do, you’re not going to back out. A lot of these guys think that I’m going to give them space, when I’ll actually do the opposite.

“I’m never going to give up my line, that’s what I’ve been brought up to do so when two riders come together, one of them is going to end bad and this time it was me, but we’ll see what happens in the future. 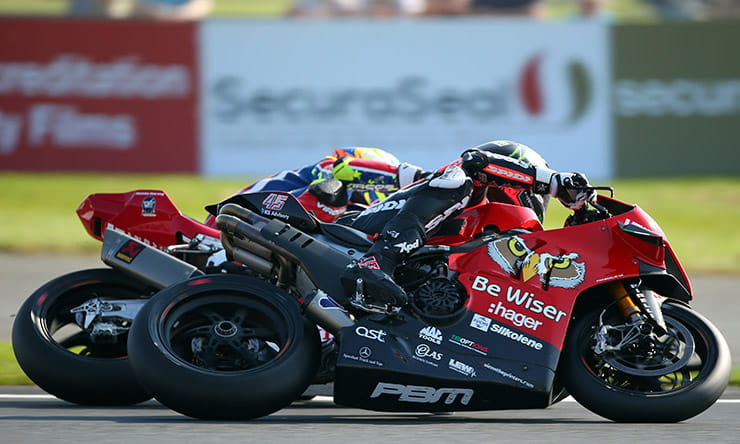 “I saw the move that Taz made on O’Halloran, and they’re team mates, everyone saw that and I think that’s the sort of thing where there is no space and you’re still trying, which ok sometimes is alright it’s a great show, but in the end riders lives are on the end of it and people sometimes forget that, they get a bit desperate.

“I know I’ve got a target on my back which is probably a little bit worse for me, but it is what it is. It’s just a lack of respect because if you watch what happened to me, and the take-out Tarran did it’s like ‘what was that for?’

“Tarran was going for the win, but it was well out of order to his own team-mate. With what happened to me, I was running wide and he still rammed me out.”

The Gloucester born man was always going to be the rider to beat after moving to the Bennetts British Superbike Championship for the first time, and moving straight in to the most successful team in the paddock.

The 26-year-old feels that everyone on the 30-man grid is after him, and expressed he has a target on his back, something the former Moto2 Championship runner-up relishes. 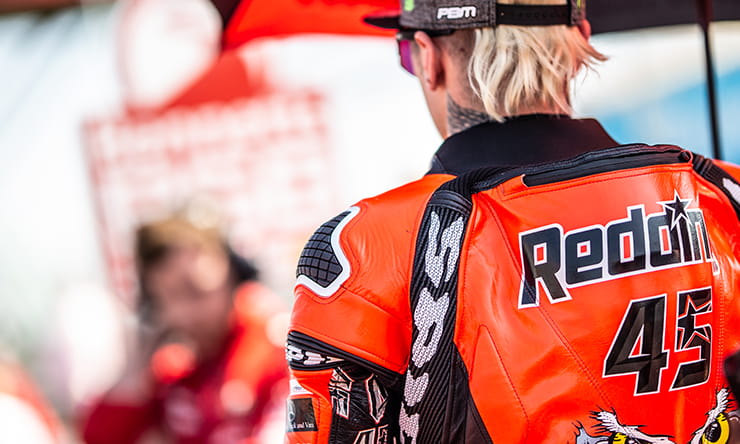 “I definitely feel there is a target on my back, I felt it in the races, the guys are diving on me. It’s hard but I’m not moaning about it, that’s racing.

“Diving and making harsh moves is one thing, but taking another rider out is over the line. We’re here for a championship, I respect the other riders, I respect safety a lot and sometimes I think that they forget about that.

“In that moment they think ‘I can get in front of Scott’ or ‘I can go one position ahead’ then bang. I was close to going over the other side of the track, and could have been easily run over, but they don’t think about that.

“I need to adjust to it, I’m not going to complain about it but at the end of the day that’s people’s lives on the line.”

Although he has fell foul of the tough nature of BSB, Redding still admitted that he enjoyed his first weekend in the paddock and reaped praise on the hardy fans that supported him from day one at Silverstone. 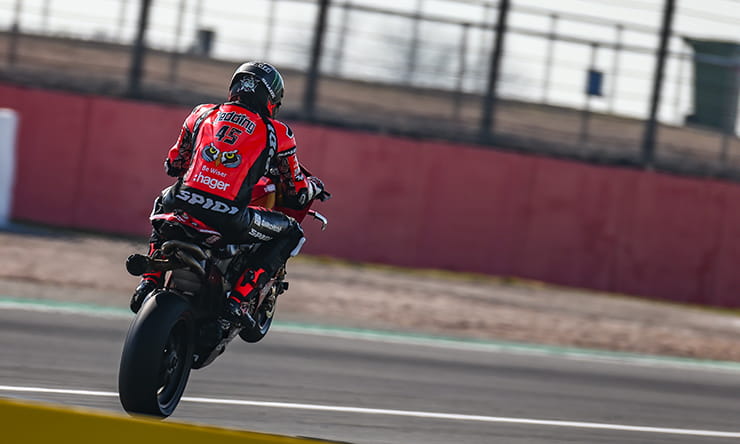 “I’ve had a lot of fun this weekend, even in the first race I didn’t have the pace but we settled for fourth.

“Getting points under our belt was the main goal really. We really want to make it to the showdown and then we can go for it, that’s our plan.

“I ended up third and it was great to be there, we had our first front row, which I didn’t have the pace for, and we just squeezed that, so that was great for me and to build my confidence.

“We had a great weekend, I’ve been really happy. We need to work a little bit on the first few laps of the race but that’s something I can only learn. I have had great fun though, it’s been mega, the fans have been great, the reception has been amazing and I’m looking forward to Oulton.”

Next up for the Gloucester man is a trip to leafy Cheshire, and Oulton Park, a circuit in which Redding hasn’t ever turned a wheel at.

But, with a test at the 2.6 mile undulating track on Thursday he is aiming to get back to basics and give himself a head start before the second round of the Championship in just under two week’s time.

“I’ve never ridden at Oulton before so that’s going to be good to get a little test under our belt to see where the track goes and what it’s doing,” smiled Redding. “That will be the real test for me to see where we end up with the other guys.

“Hopefully, our bike will be a little bit better. Silverstone didn’t really suit the Ducati down to the ground, so we’ll see how it goes at Oulton.

“I hope we can get some good results there when we get to the race and use the test to try some things.

“It’s the first time we’ve been on a UK track to test so there are some things we need to try and iron out, which riding with the other bikes I can see now. But that is us learning and getting information into the books and we’ll just get stronger.”

It was a baptism of fire for the Ducati V4R in the Bennetts British Superbike Championship, with most feeling it would run away with the victories in the hands of Redding and his team mate Josh Brookes.

But with just one podium from both races from the pair, and three technical issues throughout the weekend for Brookes the duo aren’t expecting many updates from the factory in the coming weeks to help them along the way.

“I’m not sure if there will be any more updates to the Ducati,” admitted Redding. “But the package we’ve got is good enough to win. I’ve said that from day one.

“It was a big learning curve for me at Silverstone, from one end of the scale to the other. If we need to get down and get dirty we’ll do it, but until then we need to just work on the start of the race and go from there.”

See what Redding had to say at the recent Silverstone test ahead of the season opening race weekend...

Scott Redding - "I feel ready to take a title"