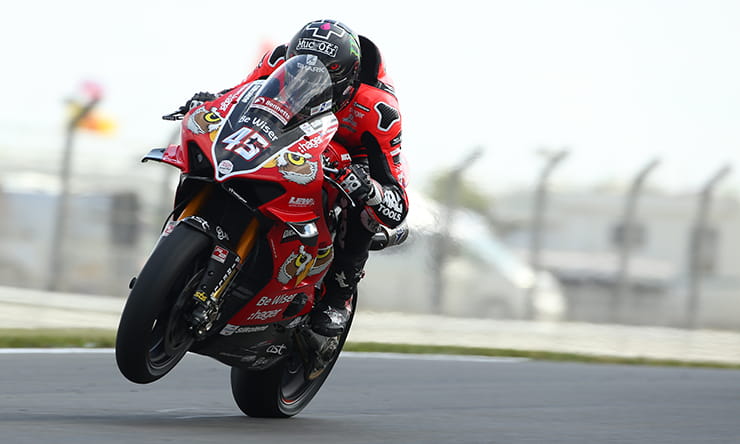 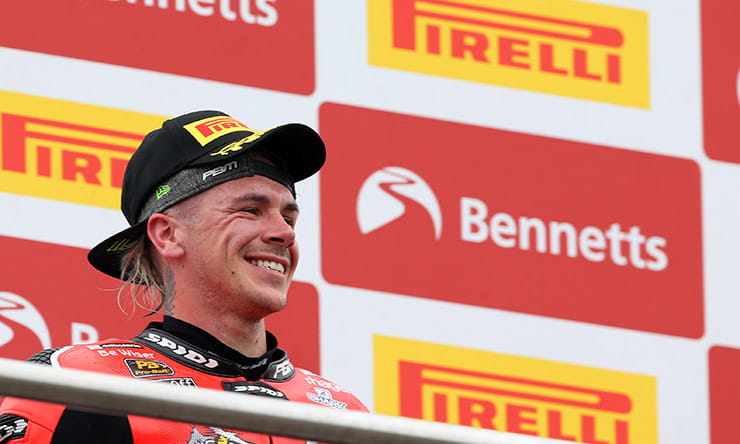 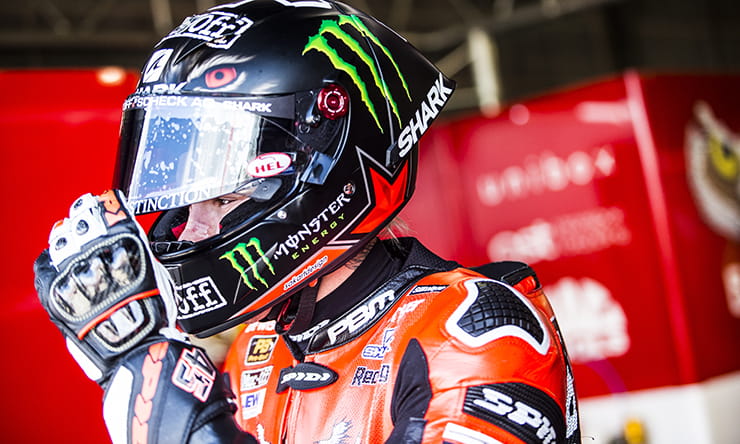 PBM Ducati’s Scott Redding admitted to BikeSocial that he felt collecting the hat-trick of wins was a tougher task that it looked on track at last weekend’s Bennetts BSB meeting at Donington Park.

Redding took all three victories at the third round the Championship in emphatic style, walking away with maximum of 75 points and the overall series lead.

But he expressed to BikeSocial at the Derbyshire track that he didn’t expect to be walking away with three winner's trophies.

“I’m really happy with the weekend, especially for the team, it’s been great,” said a smiling Redding surrounded by his loyal fans outside the PBM Be Wiser Ducati race truck.

“I didn’t expect to do the triple, but it was definitely my plan to get one or two wins under my belt. So, to do that I was happy, I can’t ask for much more.

“I had tough races and I had a close race with the rain, and I managed to control the last race, which for the first time this year I’ve been in the position where I can control it. 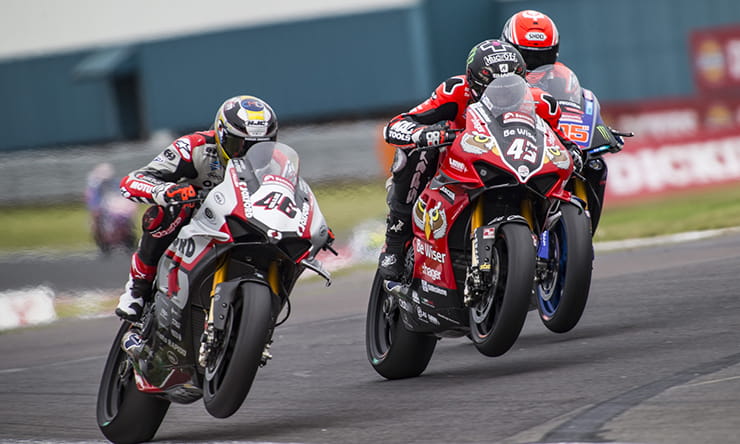 “I was also trying to learn the tyre, not to push it too much and I can’t ask for much more. I would have liked the pole position, I’d have liked that fancy watch! But it is what it is, I’ve had fun and the weather’s been pretty fair to us, at least for our races. The fans have been great, the reception has been amazing.

“I just want to thank the team, they’ve done a great job. I also want to thank everyone who came out to show their support for me. I see the fans getting bigger and bigger and I love to have that behind me.”

Although his performances sounded dominant, he had plenty of work to do in Saturday’s first race and Sunday’s second race, with Redding fighting through from as far back as 11th in the later second race.

But the Gloucester man added that he was more surprised with the way he fought through the pack in race one, where he was dropping back at a sudden rate of knots.

“Race one surprised me more than race two because they were gone and I thought, can I? Will I? What can I do? I can’t do it.

“Then I just started finding my way, digging my heels in and I was moving forward so it was mint, I really enjoyed that.

“Race two I had a little bit of deja vu, when I saw the two in front I thought ‘I’ve got these boys, if I just keep plugging away and keep my chin down, don’t make mistakes, I’ve got it’. 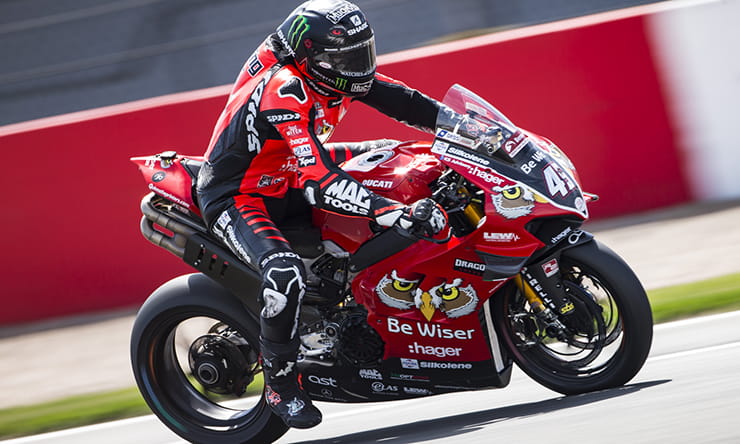 “But then the rain was coming and I realised I had to close a lunge on Xavi into the chicane because I knew it was going to get red flagged very soon.

“I made it, it was loose, it was clean, but that’s what you’ve got to do to take the victory sometimes.”

The Gloucestershire man now leads the Bennetts British Superbike Championship alone on 115 points, but more importantly he has 16 podium credits to his name.

However, the former MotoGP star admitted that his goal was to be within the top six as early as possible, but after visiting circuits he’d never seen before, he’s surprised himself to be leading the series at such an early stage.
“My goal for this championship was just to be in the top six going into The Showdown, I’ve got some mega podium credits, whatever they’re called.

“I don’t even know how that thing works! I know you get credits for the podium, I guess I’ve got some good ones now!

“The job is to try and win the championship. We know going into Brands Hatch I’ve never been there, so it’s going to be a little bit like Oulton in terms of damage limitation. 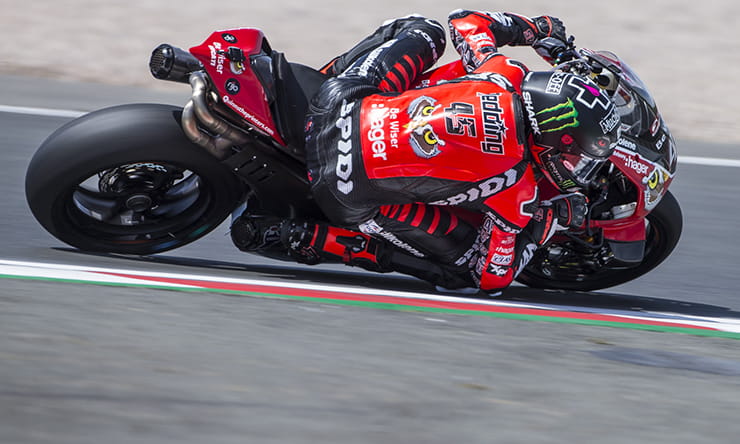 “If I can try and get on the podium at Brands Hatch that will be very good for us. Then when we get to tracks that I know, we need to try and get wins again.”

But Redding isn’t fazed by the challenge, after almost reaching the podium at Oulton Park after only a handful of sessions, he told us how he will be researching and learning the tricky Kent track.

“Donington I’ve got experience from ten years ago, so at least I kind of knew the track but going to Brands Hatch I know that I have not a clue! I don’t know! 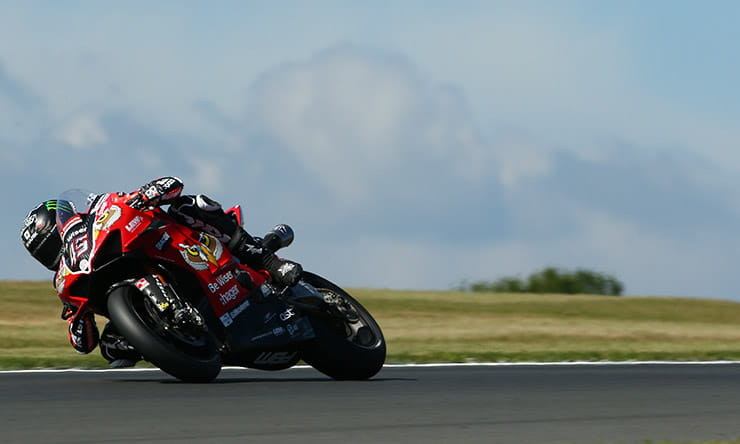 “So I’ll be going out like Oulton Park, first few laps I’ll be all over the shop trying things out. I’ll watch some videos before but it’s not the same, you don’t get the sensation it’s just a visualisation, you’re not feeling where you are, so we’ll see how it goes.

“I’ll just try and learn as much as I can from the other guys and then try and get on the podium!”

With the V4R very much the bike to beat in Bennetts BSB at such an early stage, and murmurings of brand-new upgrades available to all Ducati teams Redding could quickly run away with the Championship.

However, he admitted  after the weekend that his machine is working well and even if the team acquire upgraded parts for his V4R he won’t want to change a winning package.

“I don’t think there are any upgrades due for the bike, a new swinging arm maybe but the bike’s working well, I don’t want to change it. I’m starting to feel comfortable and getting the package to work how I want it to.” 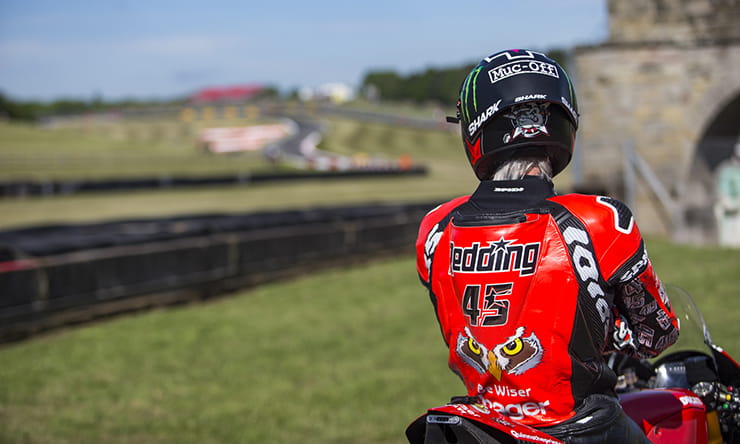