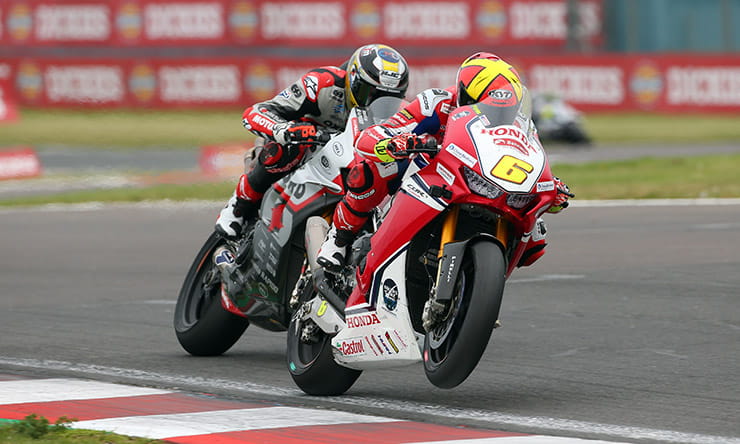 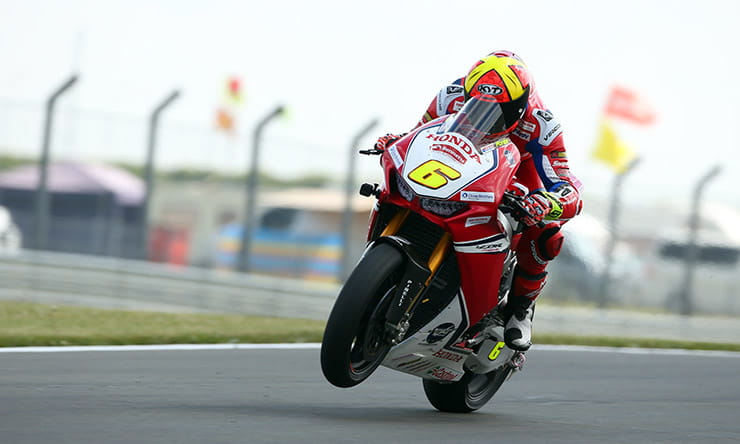 Honda Racing’s Xavi Fores walked away from the third round of the Bennetts British Superbike Championship at Donington Park with three podiums – his first in this, his debut BSB season.

Fores was the surprise package at Donington after leading in all three races, but ultimately lost out to Scott Redding who walked away with the hat-trick of wins and even though the Spaniard was frustrated to not have taken his first win in 2019, he admitted to BikeSocial that he was extremely happy to walk away with three “unexpected” podiums.

“I’m really, really happy, especially with three podiums in a row,” expressed a smiling Xavi from his Honda Racing pit-box.

“It was unexpected after the recent results at Oulton Park. I was always chipping away, trying to be calm, trying to put everything together and trying to get a set up on my bike in order to be riding safe.

“We did it, and we did a really good job all weekend, even though I was not so fast on my flying laps, I was so constant with my laps with no mistakes, and this was the key to being strong with my race pace, so yes, I’m really happy!” 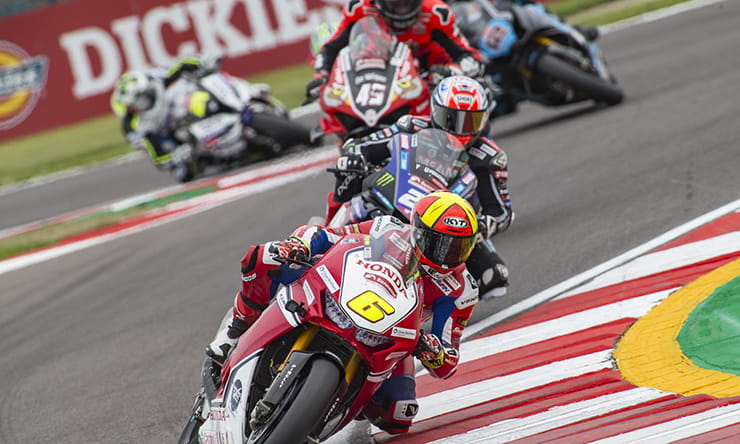 With strong race pace all weekend long, Fores focussed on setting his machine up for the three difficult 26-lap encounters at Donington Park during free practice.

And after qualifying 11th on the grid on Saturday morning, nobody thought that the Honda Racing man would be in the frame for collecting silverware in the first race on Saturday, never mind the remaining two races.

But he stated that the reason why he stood on the podium was because of his and his teams conscious effort to preserve tyre life.
“I never set the bike up in order to be fast for just one lap. I try to ensure I’m strong for the whole race in order to save the tyres as much as possible, and this is what we did throughout the weekend.

“You could see that in the sessions I was never in the top six or seven, but I was quite conscious of my pace and always riding cautious with my tyres to be sure that the tyre life was enough for the race. This was really important.

“I got good starts in all three races and really pushed hard at the first part of the race and managed the tyres right until the end of the race in each race. I’m really, really happy.” 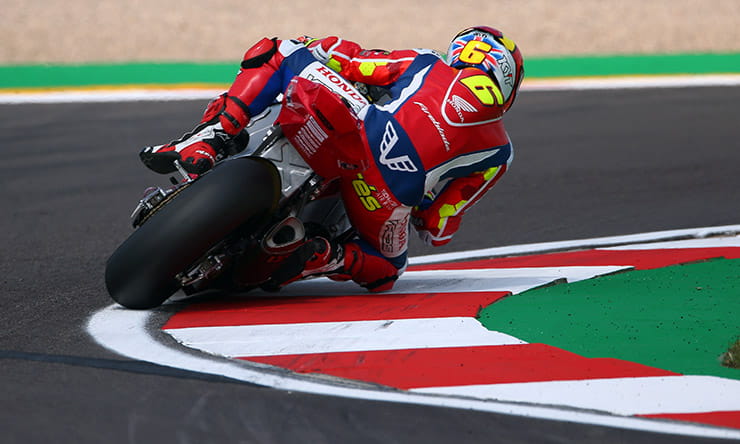 Fores is a rookie in British Superbikes after a number of years being a ‘nearly man’ in the World Superbike paddock with the Barni Racing Ducati squad, but after being dumped by the team he’d spent a number years with Fores was left without a ride for 2019. The 33-year-old made the decision to become a factory rider in a different Championship, and made the move to the British paddock, signing a deal with the Louth based Honda Racing squad.

A move in which Fores is relishing, a new challenge in a different series full of healthy competition for the Valencian to prove his worth.

“So I’d been talking with the Honda team manager for many weeks in order to put everything together and finally we got a good agreement. I’m really happy to be involved in a deal with Honda because it’s the biggest manufacturer in motorcycling, and to be involved in this product and work this season with the new bike it’s amazing. 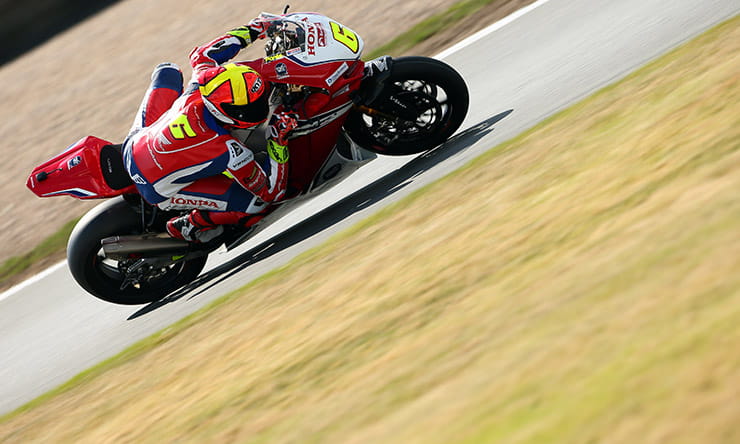 “I’m enjoying this challenge a lot, especially because it is so different from the World Superbikes without any electronics, different rules and different tracks. It’s an amazing Championship and I’m happy to be here.

“The crowds here are amazing, I can feel so much support from them, even if I am not an English man.

“I feel quite supported and this makes me want to impress, especially at Oulton Park as there was so many people! You can see that the fans here have a really strong interest in the Championship, and they know everyone and for us this is really important.

“I’m really happy because I didn’t expect to have that support, especially in my first year and after only three races. We had a lot of cheers from the people, so I think it’s going to be a nice Championship for me.”

It’s been a tough start to the season for Xavi who struggled to show his true pace at the opening two rounds of the season, sitting 16th in the Championship standings before heading to the midlands.

But he admitted that the biggest challenge for him has been learning the new tracks, and getting his head around the BSB rules of no electronics but the Honda Racing man expressed he gets excited by the challenge. 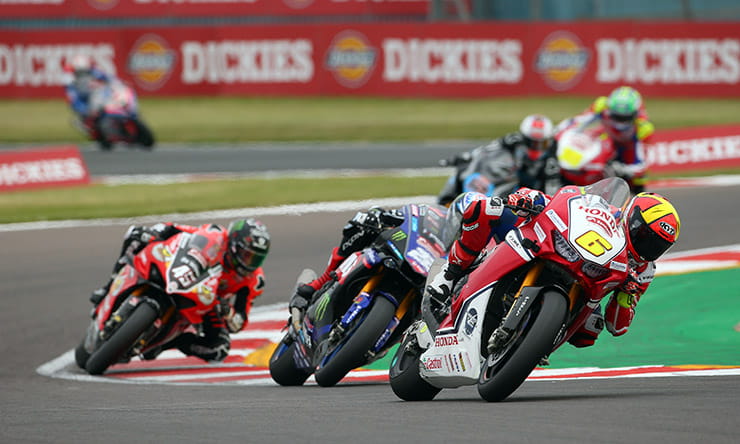 “The main problem for me has been the new tracks. With electronics I feel quite good but even without electronics, riding this bike it’s not so bad.

“Going to new tracks like Oulton and I’ve only ever been to Knockhill for testing, is not so easy. The others have a lot of experience on the other tracks and to go there and to be strong from the beginning is not so easy.

“We are hard workers though and I try to always chip away and not lose my motivation, this is the key for the races. If I can have a good weekend at Brands Hatch everything will be different.

“But now I’m fifth and in the showdown, this is something that makes me smile again. I do like to go race by race though because it’s a new championship and this was a good weekend, but maybe in the next races it will be a little bit harder.

“I have to enjoy the tracks I know though and try to show my potential in the tracks I know like Assen, Donington and a few others. This is our target for this season and if at the end I can be in the showdown it will be amazing.”