Bridewell on the V4R: "It's going to get faster and faster" 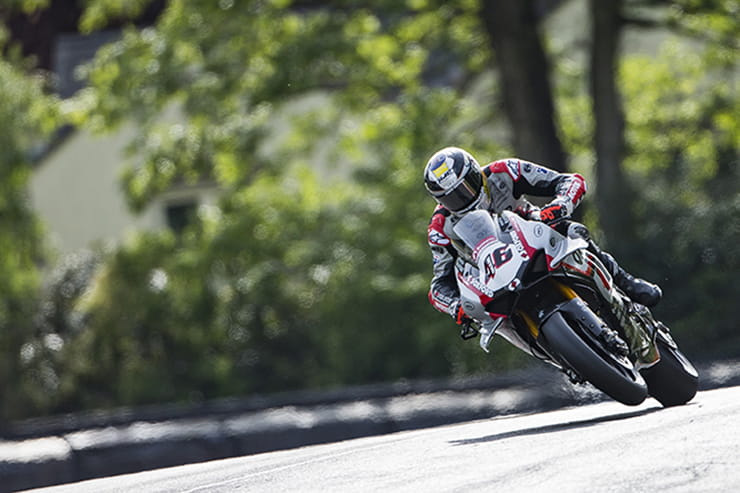 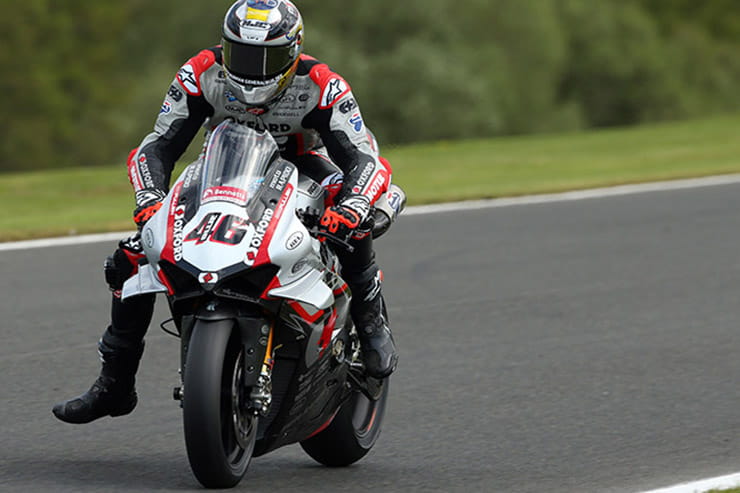 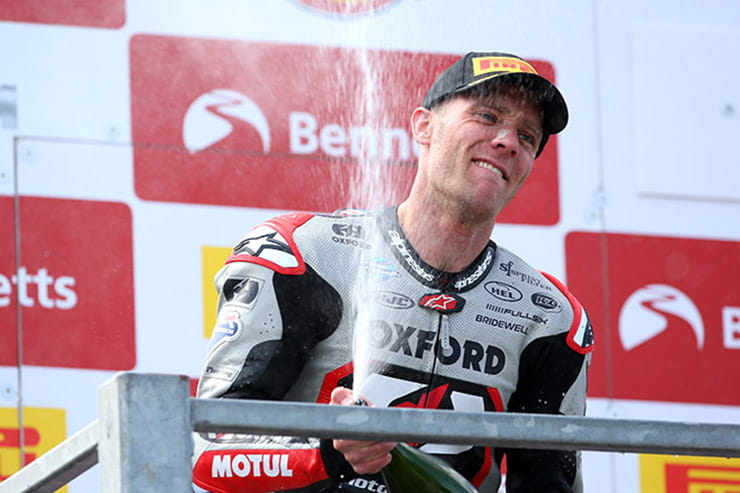 Oxford Products Moto Rapido Ducati’s Tommy Bridewell admitted to BikeSocial after his double podium at Oulton Park that his machine is just about to get better.

Bridewell collected two second places at the latest round of the Bennetts British Superbike Championship, challenging Josh Brookes all the way throughout both 17 and 18 lap races.

The all-new Ducati V4R is quickly becoming the bike to beat in Britain this year, with Brookes, Bridewell and Redding all collecting podiums early on in the machines development, but the Wiltshire based nutcase expressed his bike is only going to get better.

“Do you know what is good about it? When we come back in however many rounds, we’ll probably look back at it and think ‘cor we we’re struggling weren’t we,” said an elated Bridewell with both his trophies in hand. 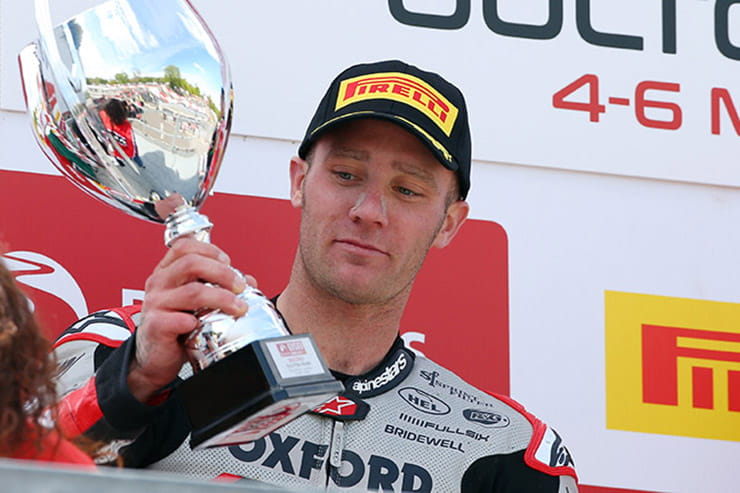 “As soon as I joined Wilf and the Ducati family I’ve had the main, head guys sending me messages congratulating me saying ‘well done,’ and I’ve never had that with any other manufacturer.

“So, I think Ducati appreciate and realise the effort even us as a team are putting in, and we are only going to get faster and stronger.”

Bridewell has had a consistent start to the 2019 campaign, he’s finished every race no lower than sixth place, meaning he walked away from Cheshire joint leader of the title race with McAMS Yamaha’s Tarran Mackenzie.

Last year’s Riders Cup Champion has proven in the last six months that it was foolish to write him off, and that the faith placed in him by Steve Moore is all he needed.

The Ducati man added that the start he’s had to the season shouldn’t be a surprise to fans as it’s what he expects of himself, and his team week in week out.

“It’s odd because I’m very happy but it’s what I expect. When I joined Wilf and his team I’ve had nothing but confidence every day I ride the bike, and if it’s not quite right I’m still confident I know that they will get it right for me. 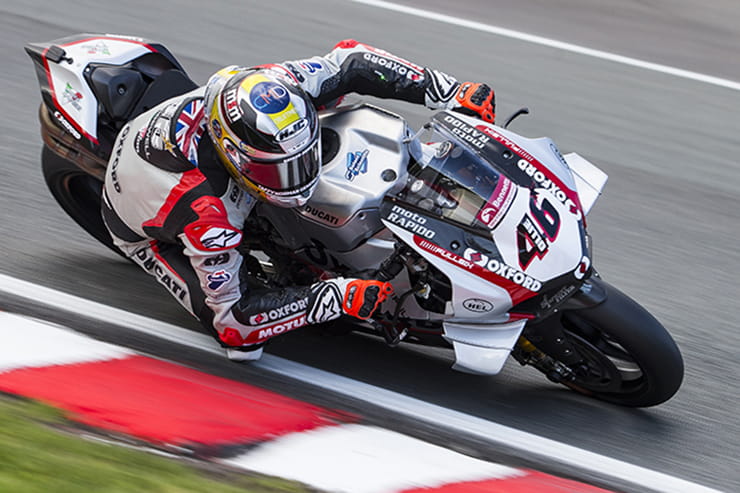 “To be honest we’ve had a good, strong start to the season, you can’t win the Championship at the opening two rounds but you can do yourself a lot of harm. We’re just keeping our nose clean, getting the results we know we are capable of and building on that.

“I knew that Oulton would always be a strong one for us and it proves that the Ducati is a strong package to be on.

“I would have liked to have had a little bit to have a go at Josh in race two, we made a fairly gutsy change and that allowed me to up the pace by a fair bit because in race one I wouldn’t have been able to run that pace, and unfortunately Josh was on it.

“Credit to the team and everyone around me that has made this possible and it’s results like Oulton, and the consistency we are showing that makes you a Champion, and that is what we’re here to do.”

It would be Bridewell’s Ducati counterpart Josh Brookes who took both victories at Oulton Park, but not by much as he, onboard the same bike, kept the former Champion Brookes honest all race long. 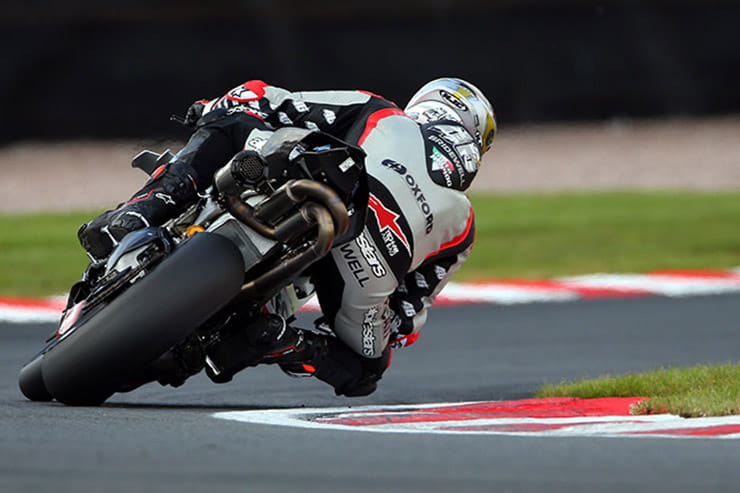 But, Bridewell felt slightly frustrated that he couldn’t attack the PBM Ducati man in the final laps, and added that the Championship points are vital at this early stage of the season.

“I guess in race two you could say it was frustrating but to be honest we had a target which was to improve the bike from race one to race two, and we made a breakthrough by a big chunk.

“The one difference from race one to race two was that the first 12 laps we were a lot faster, but the last part of the race we were stronger in race one and that is probably down to pushing the tyres harder at the start.

“It is a little bit frustrating, and honestly I was pushing hard, very hard, in the last three laps I was thinking ‘nar, I’m not going to win this.’

“Because in the first half of the lap I was stronger than him, then the last half I was having a lot of movement from the rear and I knew that it was going to be more than likely that I’d walk away with no points rather than 20 points.”

‘Rock on Tommy’ was running at a similar pace to the Bringelly man during both races, thus proving by setting the fastest lap of the race in the opening encounter, giving him pole position for race two. 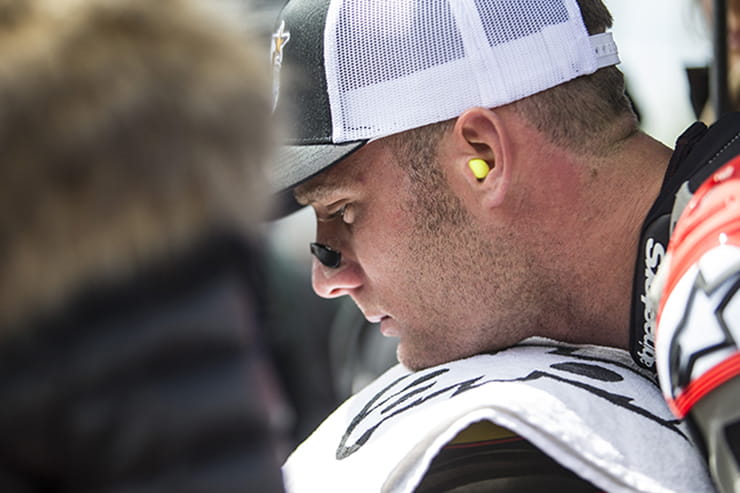 Although the pair are good friends away from the track, Bridewell added to BikeSocial’s man on the ground that he has a respect for the former Champion, but is taking a greater sense of pride with his own success.

“I hate him,” laughed the 31-year-old. “No, he’s a good mate really. I take my hat off to anyone that can beat me on the same bike, and Josh did that, but he has been very fast every single session from the official test.

“We’ve not had it click that easy, we’ve had to work a little bit harder for it. It’s almost a nicer feeling to get the results where we’ve not had it quite so easy, they’ve have had to work massively hard, but it seems like the small changes they’ve made have worked straight away.”

Time will only tell if the V4R will get better in the Bennetts British Superbike paddock, but it’s domination of the World Superbike paddock in the hands of Alvaro Bautista and the early strength shown by Bridewell and Brookes, it’s a menacing prospect for the rest of the BSB grid. 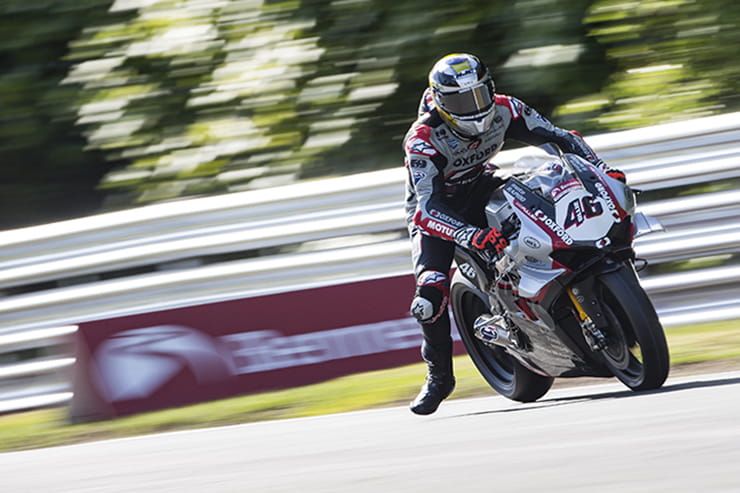