BSB | Moto Rapido’s boss after Oulton success: “We’re not scared of sticking it to them” 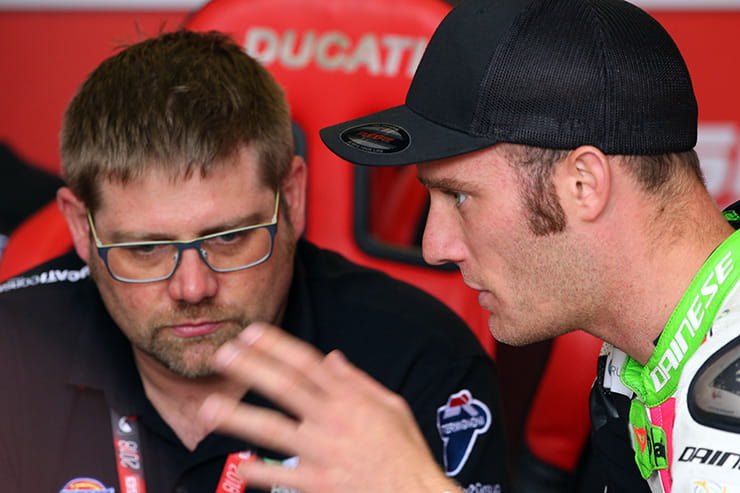 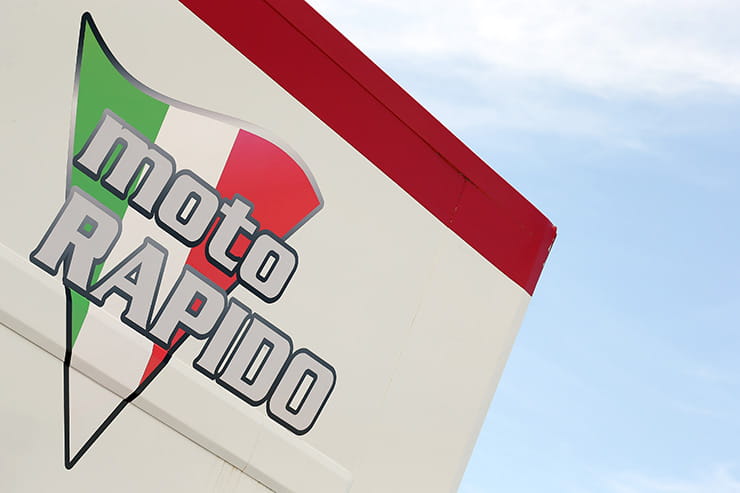 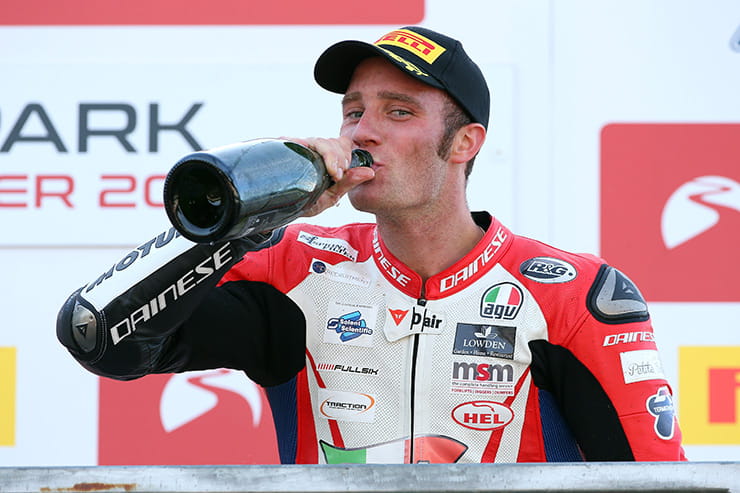 Tommy Bridewell collected two podiums in both wet and dry conditions at the shoot-out opener at Oulton Park, after a strong qualifying saw the Moto Rapido Ducati rider line up on the front row.

After a tough start to the 2018 season, where Moore and his first choice rider Taylor Mackenzie parted ways at Knockhill, he admitted to BikeSocial that after employing Bridewell he knew it wouldn’t be long before they collected silverware. 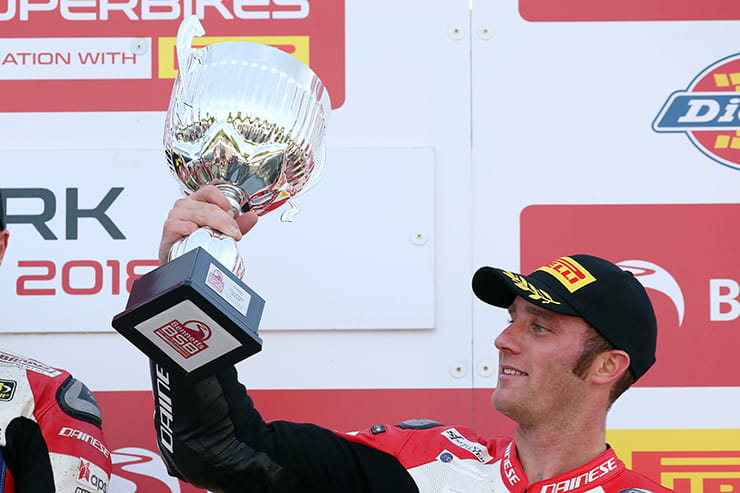 Tommy was drafted in after Mackenzie parted ways

“The top step is always the aim, it seemed like a pipedream six months ago. We aimed for the top five, then we aimed for the podium, so I don’t think it’s too much of a step. But, Jake and Leon are both racing for a Championship so they’re going to be hard to beat.

“We’re not scared of sticking it to them, Tommy isn’t scared of getting his elbows out he’s very good at that.” Moore then joked: “He won’t mind running Leon’s leg over either.”

When the news was announced that Bridewell would team up with straight talking Ducati dealership owner, many had their doubts as to how it would end up.

Although, not many have tipped the success that the duo have had since Bridewell jumped on the Panigale at Brands Hatch, but Moore admitted that the pair get on like a house on fire. 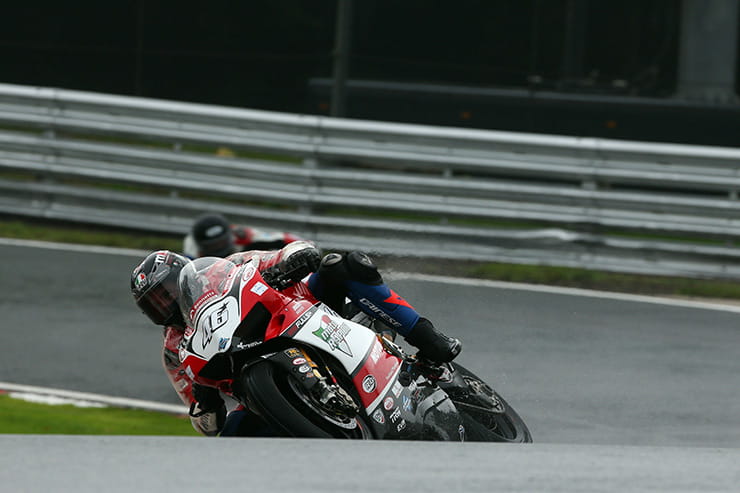 “I don’t suppose Tommy will mind me saying this, but he’s got a reputation for not getting on with people straight out of the box, but nor have I. So, I think that might well be why we both get on, we’re not particularly people people. We’re both very straight talking, I don’t put up with anything, and neither does he and that worked right from the outset.

“So, we both knew the rules and he’s been absolutely nothing but professional, he just tries every single time he gets on the bike he tries his hardest, and that for me is satisfying.”

Moore admitted that Bridewell was a breath of fresh air when he first met the 30 year-old former Showdown contender, and Tommy’s straight talking nature is the perfect fit for Moore’s small but hard working squad.

“When’s it’s like that it can go as wrong, it can go right, and it has been good, it’s been fortunate because I feel like I’m owed a little bit of luck.” 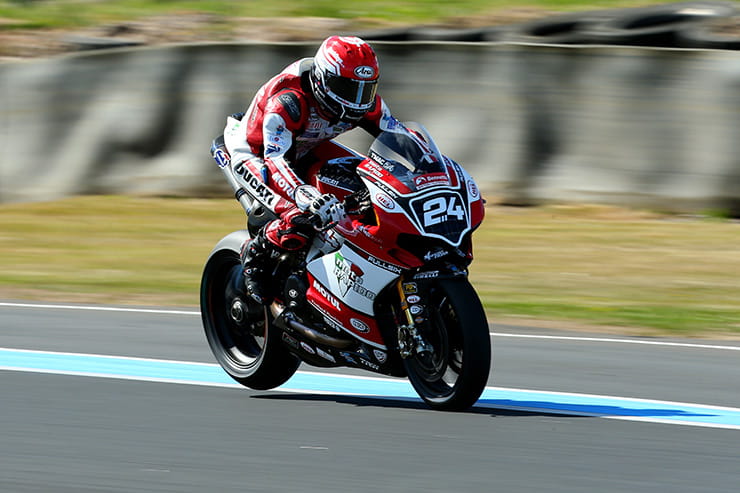 In the recent past the Hampshire based squad has tasted success with podiums from former MotoGP star John Hopkins, but Moore expressed that being back at the front is just what the doctor ordered and being the top Ducati put a smile on his face.

“We’ve had some podiums before, and we’ve had some bad luck before but to be consistently up the front is satisfying, wet, dry, all conditions, qualifying we’re always at the front which is very good.

“It’s always nice to be the top Ducati, particularly when we’re a one-rider team, there is no team mate to beat. It’s isn’t beating the other Ducati riders, but we beat everyone else aswell so we’re happy with that.”

It was a challenging start to the season for the Moto Rapido squad, after signing former National Superstock 1000 Champion Taylor Mackenzie, 2018 looked promising after a strong pre-season campaign.

Although a lack of points in the opening five rounds of the season forced the pair to go their separate ways, leaving Moore without a rider until Bridewell became available.

However, Moore revealed that Mackenzie’s recent upturn in form back in the Superstock 1000 Championship has pleased nobody as much as him.

“When we signed Taylor, I didn’t sign him thinking it would be anything else but good, but it just didn’t gel.

“We didn’t produce the goods, he didn’t produce his best riding that was it. And since going our separate ways we’ve both done better, and it’s brilliant to see Taylor up there because it vindicates my choice of him as a rider so I’m really chuffed for him.”

Tickets for the trip to the TT Circuit Assen and the penultimate round of the Bennetts British Superbike Championship are available shop.msv.com, for just £36 for the full weekend.