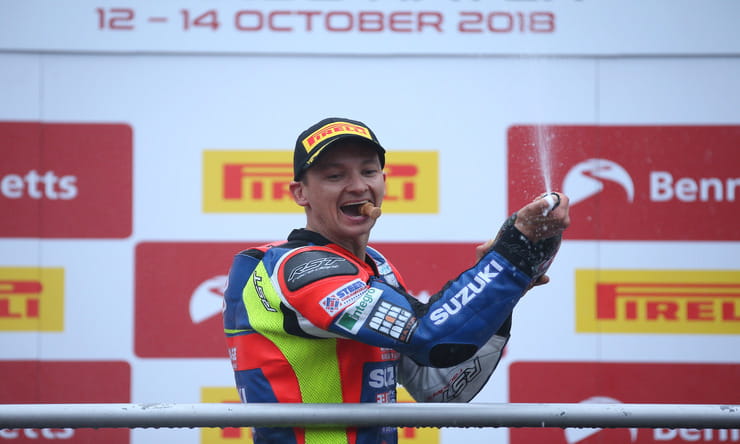 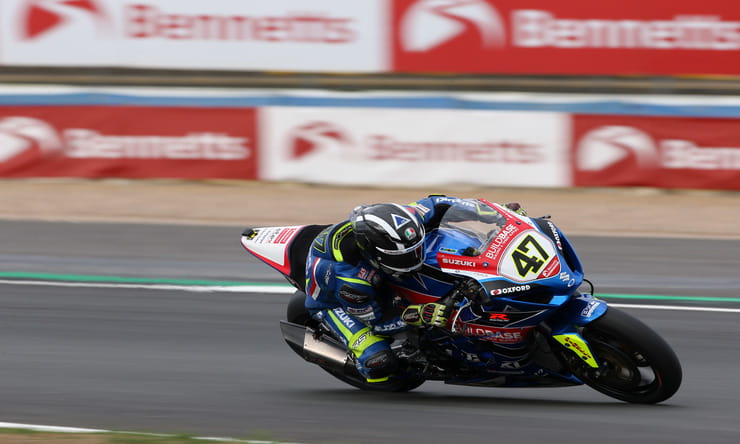 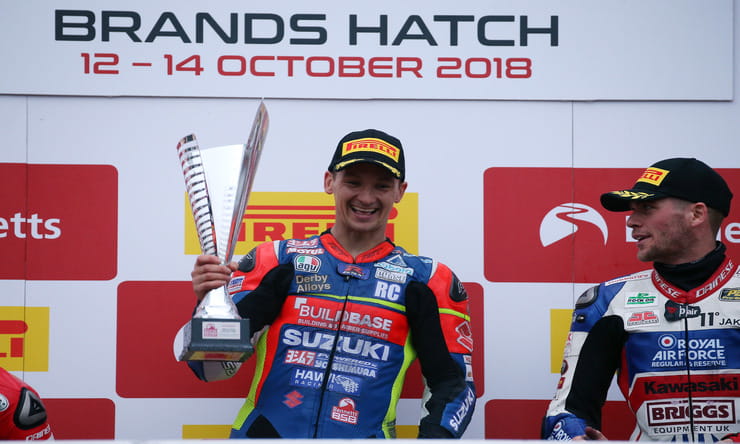 Buildbase Suzuki’s Richard Cooper revealed to BikeSocial that despite picking his first win of 2018 at the final race of the season, it’s looking unlikely he’ll ride in the Superbike class next year.

Cooper has struggled throughout his first full season back in the blue-ribband class to show his true form which saw him almost cement a showdown place in 2015.

Although, finishing 12th in the Championship this season and often being over-shadowed by his young team mate Bradley Ray, the Nottinghamshire man is now setting his sights on being the front runner in a different class.

“It’s always nice to end the year with a win,” said a smiling Cooper. “Supersport was an option for 2019 but that seems to have changed, and that changed over the weekend at Brands.” 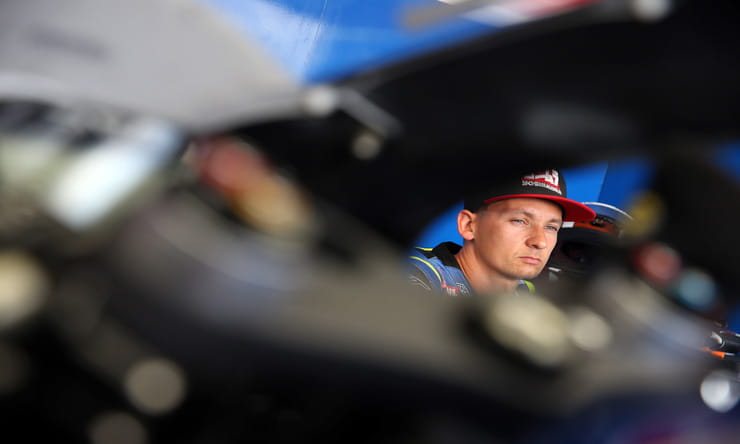 “That was only because I really fancied a go on a 600 again, I am looking at options in other classes, and like I have said to people in the team, I know I can be a contender from round one if we go to a different class.

“What is wrong with thinking that? Why not be the front runner, there is no better feeling.”

When quizzed on which class, and when asked if he would be switching back to the Pirelli National Superstock 1000 Championship, where most of his success has arisen, Cooper said: “It’s looking likely.”

‘Coopes’ came into 2018 as a strong contender for a Showdown spot, after almost snatching the Pirelli National Superstock 1000 crown from rival Danny Buchan last season.

But, after a number of difficult rounds he dropped off the coat tails of his rivals, struggling to beat his team mate on a regular basis.

Cooper has a strong relationship with raising star Bradley Ray, who quickly stamped his authority on the race for the number one spot in the Buildbase Suzuki squad with a double victory at round one. 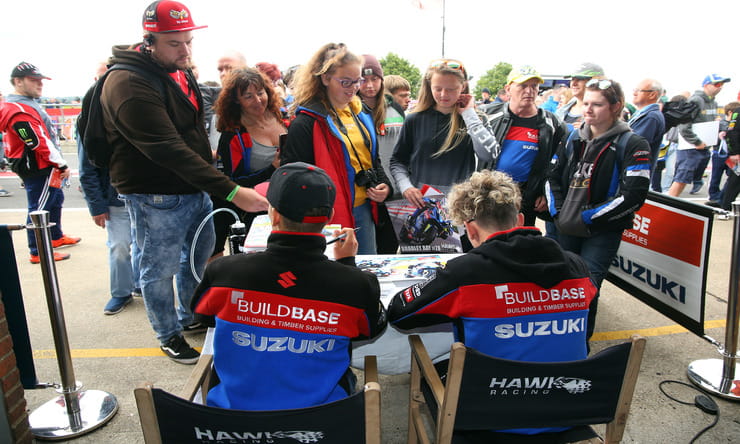 Cooper has been overshadowed by Ray in 2018

And Cooper admitted that the challenge from the opposite side of the garage has forced him to dig deeper on track, causing him to think harder meaning he lost out of vital beauty sleep before race weekends.

“This year has made me dig deep, but it also gave me sleepless nights thinking about how I was going to beat him, who has the same bike as me.

“If I had a pound for every time someone asked me if my bike was the same as Brad’s, I wouldn’t need to go racing, and it literally has been like that.

“But to now turn it around, I’m not saying I’m better than Brad, of course I’m not, but to do when it counts it’s great. If you speak to anyone and ask who won the first race, or the last race, people remember the last race in my opinion, so what a way to go into the winter with a win.” 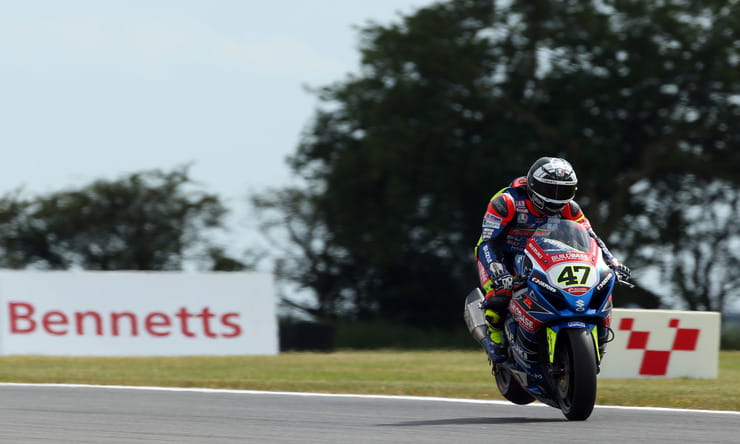 But Cooper expressed that the potential has always been there for the 36-year-old and the factory backed Suzuki outfit, but the hard work didn’t always pay off for the former Superstock 1000 Champion.

The final three races of the Bennetts British Superbike Championship saw Cooper back to his best, taking fourth place in the second race at the final round, before taking his second career BSB victory in style.

“The potential has always been there, I always believe I can be a podium runner in BSB but if you’re a little bit off, you’re a long way behind

“Sometimes I have raced very, very hard and I’ve finished tenth but at Brands Hatch I rode my own race, rode around and won the race and that is how it is. 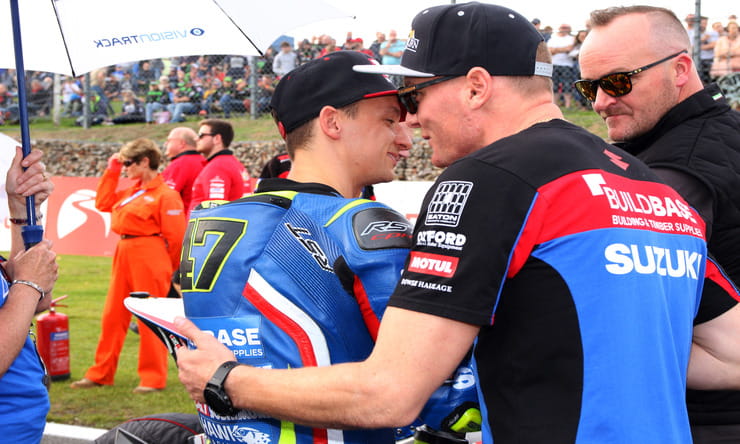 McConnell could be the man to replace Cooper on the Superbike

“I tried just as hard at round one than I did at round 12, so to get the team another win is great because when you think about it their last win was round one. It’s been a long old season for them after starting the year so well, then have a lull in results and then to end it where we should be, so I’m buzzing.”

Cooper was quick to add that nothing major had changed on his Buildbase machine in order to help him improve on track, and that his machine was exactly the same as his team mate’s.

Electronics are always a big talking point in Bennetts BSB, with no traction control like World Superbikes, mapping is key, and the power delivery of the machine helps the rider as they lay the power down.

Something in which Cooper expressed his team found a break through at Brands Hatch. 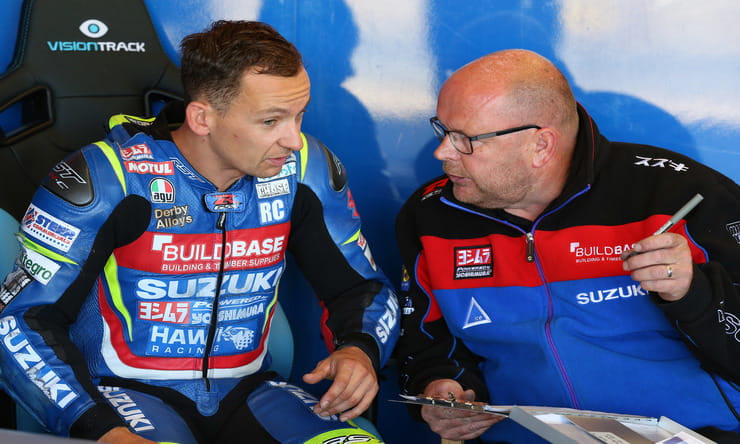 “Like always we’ve tried to improve the bike, whether it’s at the track or a Monday morning at the workshop, and I’m always striving to become better myself.

“I can’t say fundamentality it’s one thing we have changed, one thing we learnt in the wet at Oulton Park was we tried to map the bike for the rain, and it made it really hard to ride.

“So, what we did for race three at Brands, was we left the full power in the bike and let me control it with the throttle and my right hand

“It made it so much connected to me, in theory it was a little bit more dangerous, you do hear riders talking about having softer maps to make it more user friendly, well I don’t want that.

“I want the full power, so I can be the judge of it, so I could feel it. Oulton Park was dismal, I walked away feeling like I couldn’t ride a bike anymore in the rain, so to go to Brands and win the race was fantastic.”