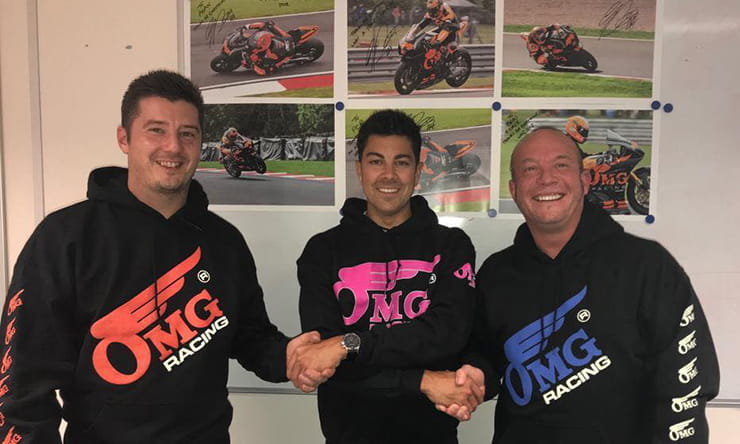 OMG Racing Suzuki will double their efforts for the 2019 Bennetts British Superbike Championship, announcing that Gino Rea will return to the team for a second consecutive season alongside new signing Luke Mossey.

Rea made his debut in the series this year, consistently running inside the top ten and securing top ten finishes in the final four rounds of his rookie campaign. The former European Superstock 600 champion and Moto2 World Championship podium finisher is now looking ahead to the new season with confidence of further improvement after a learning year with the Superbike.

Rea said: “I’m very pleased to continue my relationship with the OMG Racing team. We’ve learnt and developed so much this year and it only made sense to continue together. Towards the end of 2018 we started to show our potential and we were finding our way with the new Suzuki GSX-R1000. I believe we can continue to improve our package so it’ll be important to have a solid few tests over the winter to head into 2019 as strong as possible.

“This will be the first time since 2010 that I have stayed on the same machinery and team for consecutive years which is something I’m really looking forward to, and I’m extremely grateful to OMG Racing for giving me that opportunity.”

Team Principal Paul Curran added: “I’m looking forward to working with Gino for a further season as we can build upon and grow what we have achieved this year. In the latter part of the year, everything was starting to click into place so if we can start from where we finished, with the further developments over the winter to improve the bike, we will be aiming for top five finishes and definitely a Showdown position.

“Team OMG are off to Cartagena at the end of this month for a few days of testing, so it will be great seeing Gino back in the saddle.”

The ‘M’ of OMG Racing, Greg McPhail commented: “The team were the first outfit in the UK to bring Gino to the Championship after many teams had previously, unsuccessfully tried, so to retain him shows the hard work and the talent that shines inside the team.”

O'M'G Racing, Greg McPhail added: “From the O, M, & G, we are delighted to retain Gino for 2019. The gravity of the task at hand in our first year in the Bennetts British Superbike coupled with the fact that Gino had not raced on the UK circuits meant we were on the back foot – however, it was clear to see that we got stronger all year, finishing at Brands Hatch with Gino’s joint best result of seventh.

“Going into our second year, Gino has track knowledge and data – we are all sure that Gino will start 2019 on the front foot and continue the great improvement he has shown. Coupled with Luke Mossey, I believe we have one of the best line ups on the grid and I for one can’t wait for it all to begin again.”