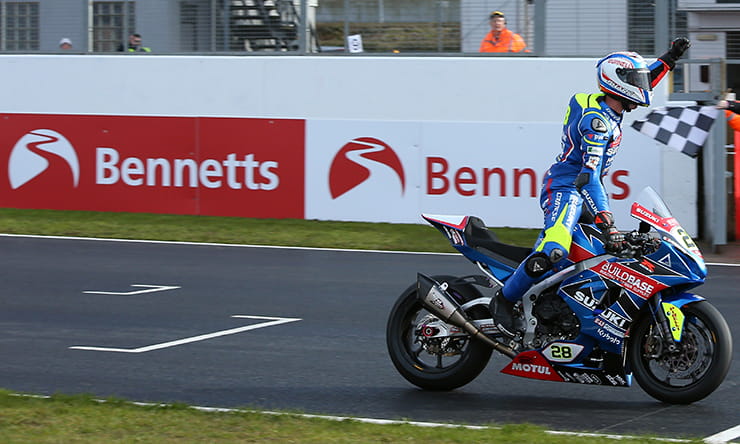 The Kent ace got off to a flying start in the drying conditions, leading the race from start to finish, despite initial pressure from Dan Linfoot and defending champion Shane 'Shakey' Byrne. Danny Buchan meanwhile was moving up the order on the FS-3 Racing Kawasaki and he was soon piling on the pressure on the Be Wiser Ducati rider.

Haslam was determined to make amends for missing out on the podium yesterday and he made his move on Linfoot on the eighth lap, powering ahead and defending hard before edging out an advantage to bridge the gap to the chasing pack and trying to close down Ray. The ‘Pocket Rocket’ had to settle for second, but it was a positive end to his home race weekend for the JG Speedfit Kawasaki rider.

Meanwhile Buchan continued his charge and despite an attack from Byrne on the final lap, he held fourth position with Christian Iddon moving up the order in the closing stages to finish sixth after an epic battle with Glenn Irwin, Luke Mossey, Jason O'Halloran and Michael Laverty.

The championship now looks ahead to the second round of the season at Brands Hatch in just under two weeks' time with Ray and Byrne locking out the top two positions in the standings ahead of their home round.

The next round of the 2018 Bennetts British Superbike Championship take place at Brands Hatch on April 13/14/15. For more information visit www.britishsuperbike.com