IN PICTURES: The very best photos from Thruxton BSB

BikeSocial’s pick of the best snaps from round 7 of the Bennetts British Superbike Championship at Thruxton Race Circuit. 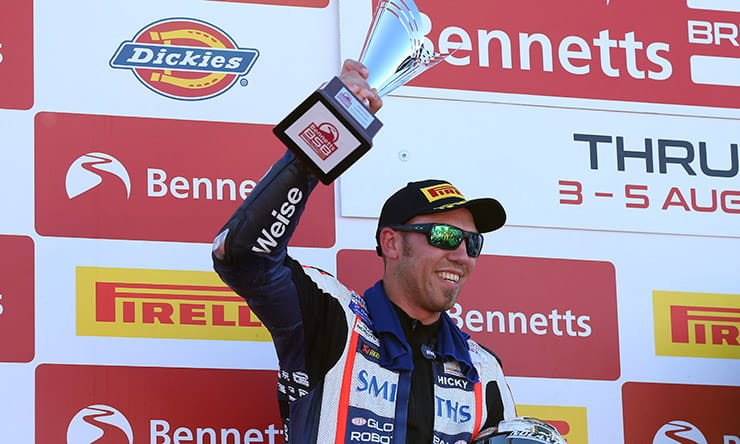 Hospital Hero: Storming to the top of the times in both practice sessions on Friday - just days after returning from Japan and feeling somewhat second-hand - Peter Hickman continued to shock the crowds as the weekend developed. Rushed to hospital on Saturday night and admitted for treatment to a kidney infection, the #60 rider refused to give in, riding to not one, but two hard-fought podiums just hours after being released. 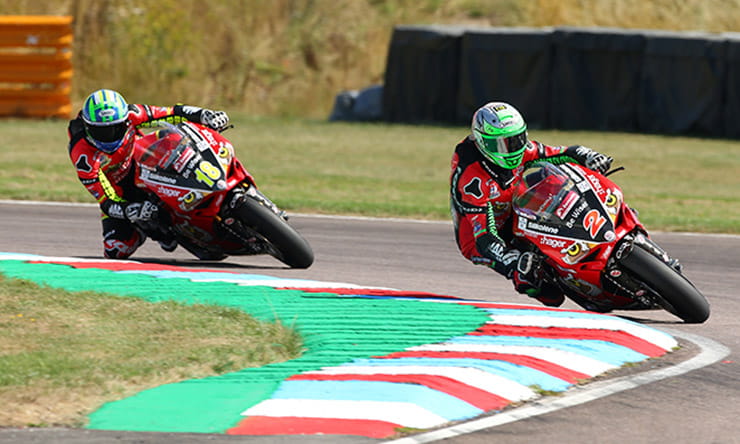 Family affair makes history: Glenn and Andrew Irwin became the first brothers in BSB history to line up together on the front row of the Superbike grid. The stellar final qualifying performance by the pair of Ducati riders consolidated an already impressive showing from Andrew, on only his fourth race weekend in the top class, having already set the fastest lap of both the weekend and the circuit - a 1’14.346 - during Q2. 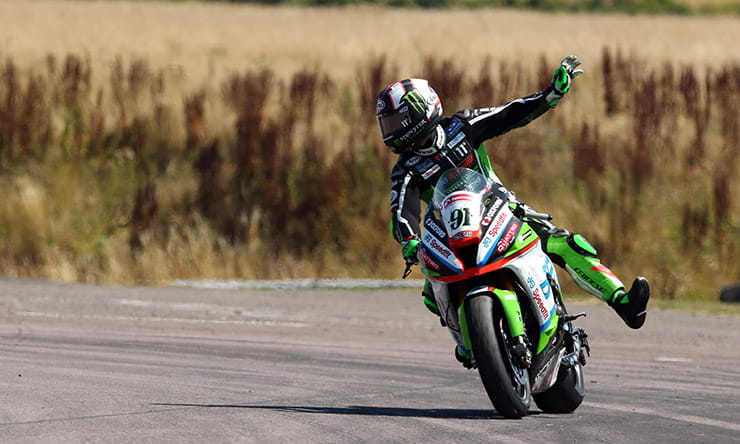 Haslam breaks Thruxton duck: No doubt buoyed by the success of his Suzuka 8H podium a week before, Championship leader Leon Haslam finally took his maiden win at the Hampshire circuit - on the 11th time of trying. A victory and fourth place for the JG Speedfit Kawasaki rider sees him head to Cadwell with an 82 point lead over second place man, Jake Dixon. 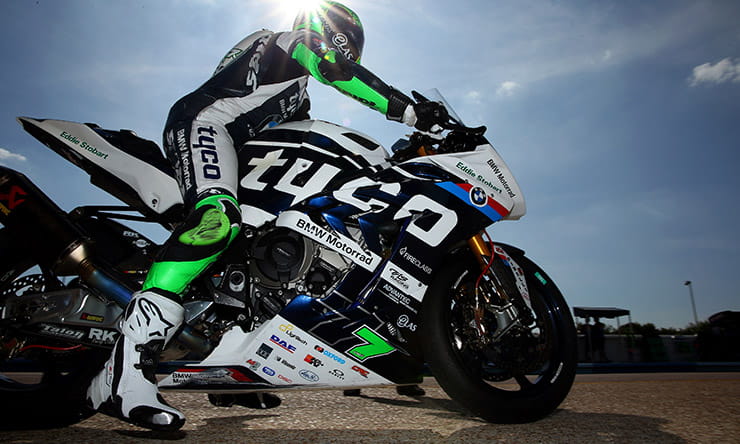 Tyre life - story of the weekend: Despite his confidence in a strong race-pace developed with the Tyco BMW team throughout practice, Michael Laverty failed to make it through Q1 on Saturday. Caught out by traffic in the opening stages of the first qualifying session, and having already opted to save a new tyre for the final shootout, the frustrated Northern Irishman was forced to start from 19th on the grid for Sunday’s action. 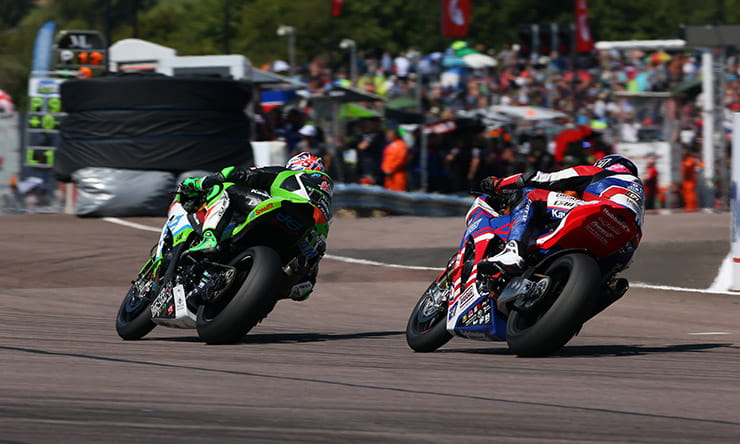 How close do you like it?: Close racing and intense lap-after-lap battles throughout the field were highlighted by the almost photo-finish to race one, with just 0.118 seconds separating Dixon and Haslam for the first win of the day. 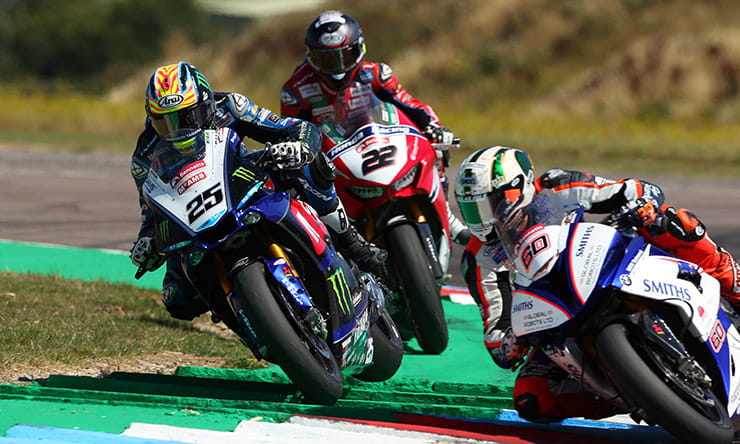 Aussie rivals: They may be countrymen but Josh Brookes and Jason O'Halloran weren’t holding back during Sunday’s track action. The Australians came together at the chicane in the closing stages of race one's podium battle - the clash allowing Hickman through to take third place - with tensions continuing to run high in the garage afterwards! 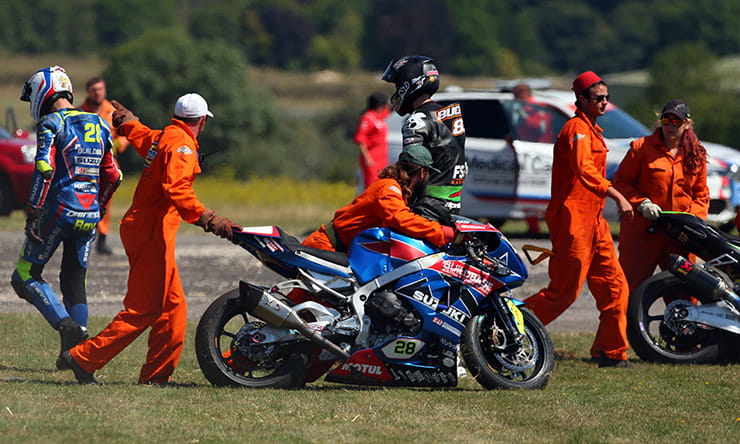 Three-way pile-up: Bradley Ray, Danny Buchan and Michael Laverty’s first race was over almost as soon as it began, after the Suzuki rider collected the disappointed duo at the chicane on lap three. The crash put paid to Laverty’s impressive early progress, having scythed through from 19th to make up 10 places on the first lap. 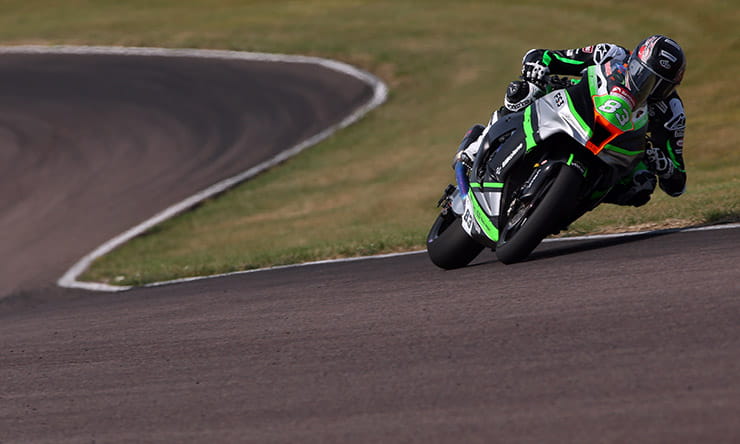 Buchan down but not out: FS-3 Kawasaki’s luck continued in race 2 as the reigning STK1000 Champion was again taken out - this time at Campbell’s by Shaun Winfield. Despite the weekend’s two DNF’s, however, Buchan still remains firmly in showdown contention, inside the top-six, on 111 points. 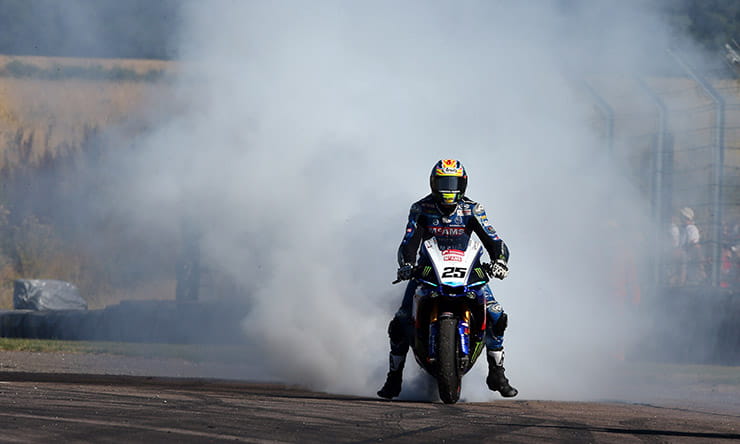 Celebratory burnout for Brookes: Suitably fired up after race one, a dominant mid-race performance for the late-afternoon contest resulted in the perfect climax to McAMS Yamaha’s weekend as Brookes put the R1 on the top step of the podium. Celebrating in style with a classic burnout for the delighted crowd, the win moves the 2015 Champion to third in the standings and collects him some well-needed podium credits. 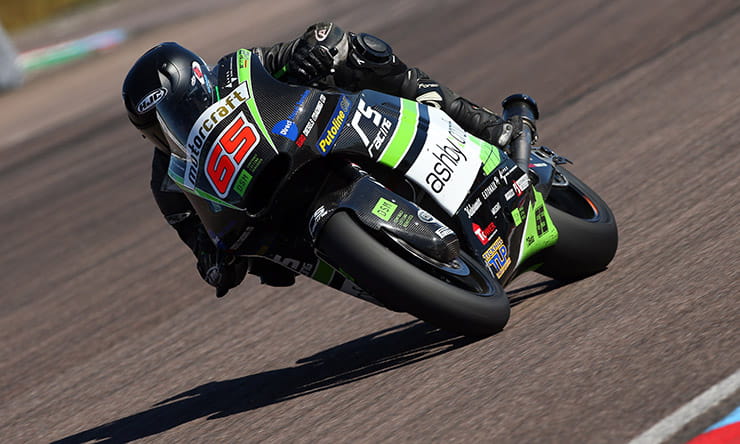 Class of his own: Josh Owens clinched the outright victory in dominant style during Sunday’s Supersport feature race, holding a 12 second lead to triumph over the rest of the pack, on his Moto2 Kalex machine. 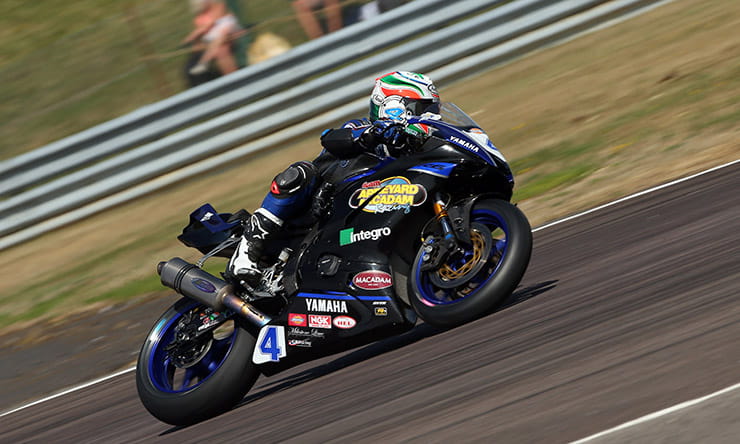 Hard as nails: Jack Kennedy showed he meant business on his return to action after a training accident last month, securing a double podium in the Supersport class despite riding with a broken hand. The Dubliner rode through the pain barrier to claim a hard-fought second in Saturday’s sprint race before taking the victory in Sunday’s feature. 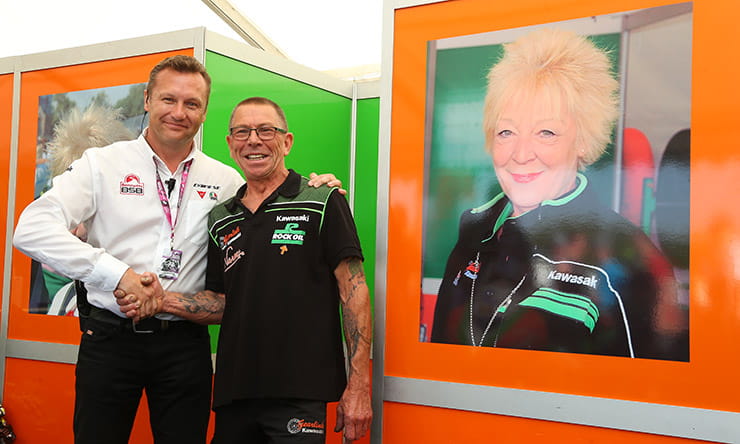 In memory: The late Norma de Bidaph will forever be remembered within the BSB paddock for her and her husband Michael’s support of upcoming riders and the talent of the future. From 2018, the Dickies British Junior Supersport Champion will be awarded the Norma de Bidaph Trophy, as a tribute to her memory. 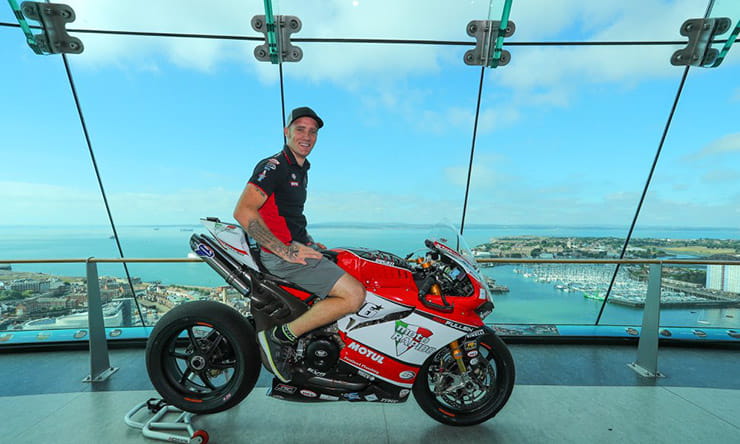 Home high: Wiltshire rider Tommy Bridewell and the Moto Rapido Ducati started the weekend at the top of the Spinnaker Tower, in preparation for the Winchester-based outfit’s local race, concluding the partnership’s home round - Bridewell’s second at the team - with 11th and 7th place finishes. 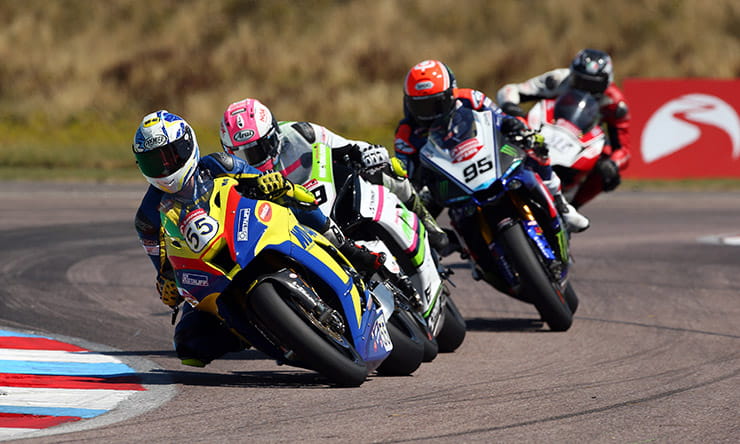 Rookies on the rise: The fastest circuit on the BSB calendar proved a happy hunting ground for rookie’s Mason Law and Chrissy Rouse, gifting top-10 and season’s best performances for both the WD-40 Kawasaki and Movuno.com Halsall Racing Suzuki seated riders. 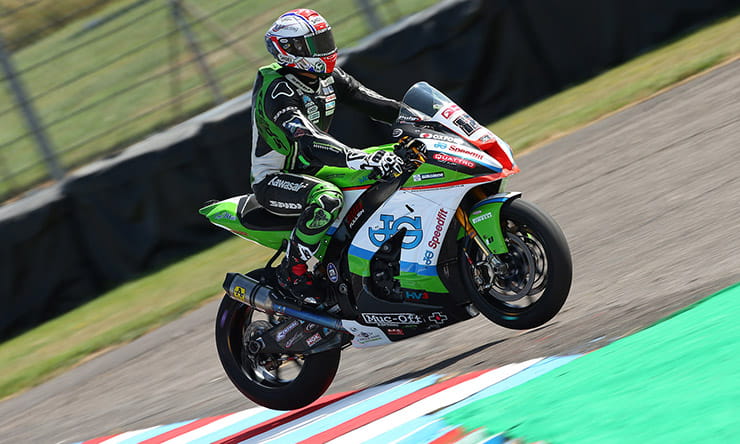 Jump for joy: The drama shows no sign of letting up as me now head north to Cadwell Park. With the final few Showdown spaces still wide open, we're undoubtedly set for some tense, action packed races at the spectacular Lincolnshire Wolds venue. Here’s Luke Mossey practicing for the infamous 'Mountain' last time out ;)