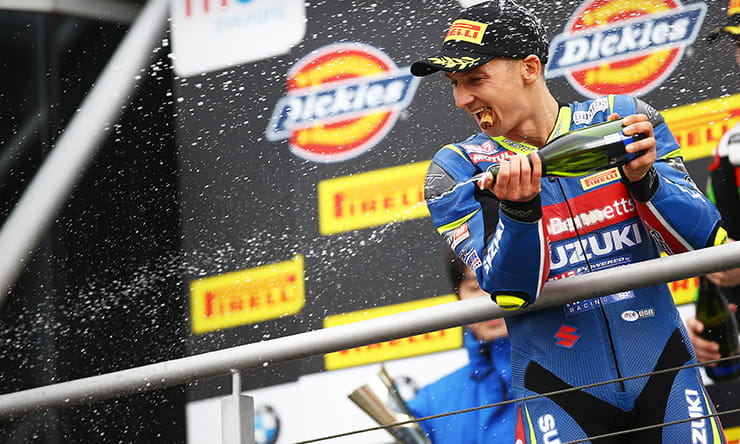 Because the Superstock series doesn’t race at Assen, the 33-year old from Nottinghamshire will swap his stock Suzuki GSX-R1000 for the Superbike to join Sylvain Guintoli and Taylor Mackenzie in the Bennetts Suzuki line-up.

The GSX-R1000 is the only all-new bike on the grid in this year’s Superbike championship and the team has spent much of the year developing the new Suzuki. But with Cooper’s experience and proven development record, both are hopeful of further improving the bike at Assen.

Richard Cooper, “We always talked about doing something at Assen, with the Stock 1000 class not travelling to Holland. We talked about Supersport again, like we did at Thruxton, but decided to do Superbike in the end. For me, it’s the best option. The team has made good progress with the bike in Superbike spec in recent rounds, and we’ve seen that. I believe the bike is already good enough to achieve results on and I feel I can help develop it a little more with my experience. There’s no pressure on us this weekend. From a setup perspective, we’ll approach it like we do any other weekend and work through things one-by-one. But it’s also a chance to try some other options and other settings without the pressure of results so much. Things that maybe the team has been reluctant to try with Taylor or Sylvain to this point. We can experiment a little more. But that said, I also want to achieve two strong results and I think we can.”

Taylor Mackenzie returns from injury after missing the last round at Oulton Park following his big high-side at Silverstone the week before. After an encouraging 7th placed finish in race one, Mackenzie’s lap one incident resulted in a broken foot.

Taylor Mackenzie, “I'm looking forward to Assen and getting back on my race bike. It was horrible having to just watch at Oulton. The foot's recovering well, though. I'm still on crutches and it's going to be sore, but I figured my boots will hold the bones in place while I'm riding! I'll be out at Knockhill on Wednesday, just to get some laps in and get used to it. But then it's onto Assen. It's a circuit that should suit us, and the team has been making good progress with the bike. We had a good result at Silverstone before the crash, and as a team we've improved from there, so, if the foot doesn't hold me back, hopefully we can get two more good results.”