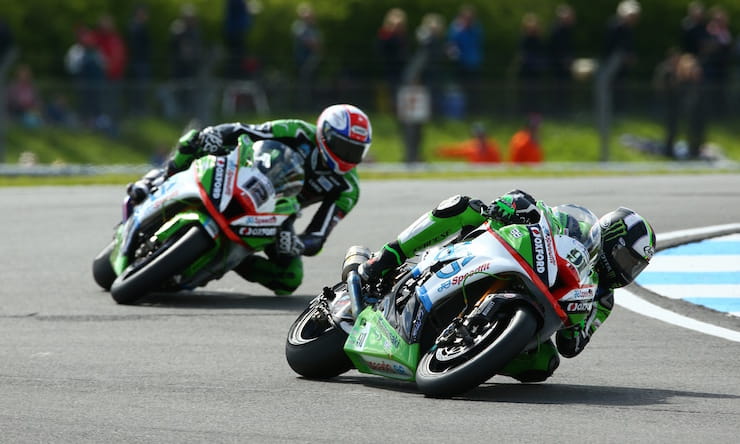 Leon Haslam who started from pole opened his account for the season with an impressive victory in today's opening BSB race at Donington Park, to lead a JG Speedfit one two.

James Ellison took the holeshot from the second row of the grid to lead the pack down Craner Curves for the first time and the McAMS rider set the early race pace until Haslam grabbed the lead on lap eight.

Leon’s team mate Luke Mossey followed the JG Speedfit rider through into second on lap nine, as Ellison started to loose rear grip aboard his Yamaha. This left Christian Iddon (third) and Peter Hickman (fourth) to fight it out for the remaining places on the podium.

Bennetts Suzuki’s Taylor Mackenzie fell from fourteenth on lap seven, with teammate Sylvain Guintoli crashing out of ninth with nine laps to go.

Haslam's victory was only his third ever race win around the Leicestershire circuit: “I feel good and confident in the tyre. I knew I had a little bit of pace left, but it was all about managing the race and getting a solid result under our belt. Credit to the team, they’ve found a lot in the bike over winter and we’ve still got some more improvements to make with it.”

Defending champion Shane Byrne did not make the start due to a fall in morning warm up at Craner Curves. The double race winner at Donington Park last year sustained concussion in the crash and misses both races this weekend.

Race two gets underway at 16.30 today with Brookes starting from pole position.