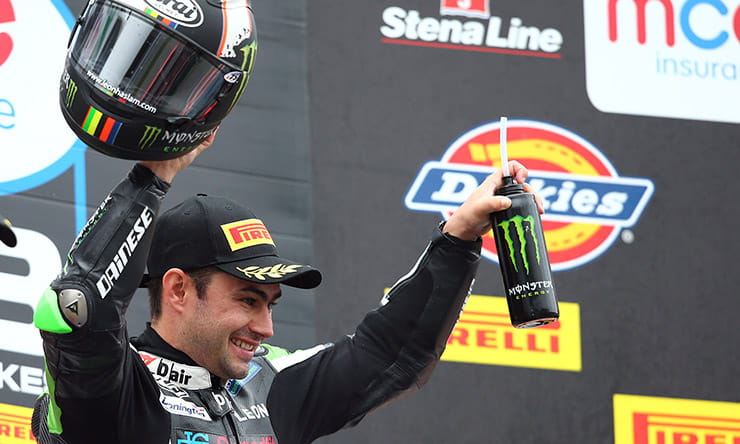 JG Speedfit Kawasaki’s Leon Haslam has wrestled his way back into the British Superbike Championship battle this weekend in the Netherlands, taking both race wins in front of Shane ‘Shakey’ Byrne, closing the points gap to just 17 points.

Byrne looked like the man beat today, but after Haslam’s team worked hard into the night to find a solution to the problems he has had this weekend, the 33-year-old closed the gap to the Sittingbourne man.

“Friday and Saturday wasn’t ideal,” admitted the ‘Pocket Rocket.’ “We had some big issues but we managed to solve them overnight. The last five or six laps of the race I started to get a misfire again.

“The team changed a few components that solved it this morning so one of those may have gone faulty again on the electronics. I can’t really be unhappy, it’s a double win and we can go to Brands with our heads held high.”

Haslam’s crash at his native Donington Park last time out means the former Grand Prix star is now playing catch up to his main rival Byrne, and afterwards he conceded that the tip off at ‘Redgate’ has made it more hard work.

“The big 25 points lost at Donington wasn’t ideal, forgetting that one race over the whole year I would be 17 points ahead of him. That one crash has obviously made it a little bit more hard work but we’re here to win races and we have done what we needed to do here.

“I felt that I could be quite comfortably quicker than him (Byrne), but even if you are quicker than someone around Assen that doesn’t necessarily mean you are going to beat them. It’s such a fast, flowing track, it’s more about tactics and putting yourself in the right place at the right time.

“I knew he had the pace as well, I knew it would come down to me and him. Race two I saw him down the order for most of the race, and I thought that this one might be a little bit easier.

“He managed to work his way through with a couple of laps to go, he made me push at the end again. He had a good weekend in fairness, we needed to do what we needed to do, he did what he needed to do by finishing second. We can go to Brands now and try win three more races.”

Race one saw Haslam’s team mate James Ellison take to the podium in third place, but he dropped back in the second race to seventh place, as Jason O’Halloran reached the podium in race two behind Haslam and Byrne.

Tyco BMW’s Michael Laverty now leads the Riders' Cup by five points from Richard Cooper, and that battle is set to go right down to the wire just as the fight between Haslam and Byrne at Brands Hatch.