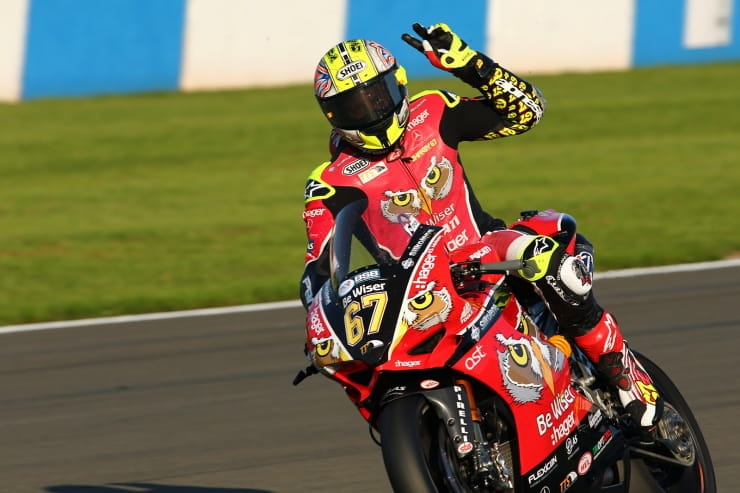 Four-time British Superbike Champion Shane Byrne has grabbed the advantage in this year’s showdown after taking two wins at Donington Park today, piling the pressure onto his rivals as Leon Haslam crashed out of race two.

The Sittingbourne man recovered from his disastrous weekend at Oulton Park, and looked unstoppable in both races at Donington, and Byrne admitted it’s a great feeling to be back on top of the box.

“It’s been a great weekend,” expressed 'Shakey'. “Yesterday and Friday afternoon were quite a lot cooler than today and because of that it was hit or miss as to what tyre to choose. In the first race I knew I had to get out front and control it, but the second race was a little bit tougher.

“I sat in third for a while, and felt almost ridiculously comfortable. I knew there was going to be some harsh moves, I’m not an idiot I’ve been around a long time and I’ve raced some fast guys and I wanted to make sure that when I got through I really got my head down and made a break.

Race one saw Ellison grab the holeshot from Haslam and Byrne, however after sizing up the two JG Speedfit Kawasakis early on in the race, the four-time champion raced into the lead.

The Be Wiser Ducati rider controlled the gap from the front, keeping Haslam at arms length all throughout the race until the final few laps where he broke away from the Kawasaki rider after conserving his tyre the best, crossing the line with a seven second gap.

The battle for third was won by Honda Racing’s Jason O’Halloran after he reeled in Ellison, keeping his title chances alive.

Race two saw Ellison grab the holeshot once again, with Haslam and Byrne chasing the Cumbrian. The first lap saw O’Halloran crash out, however back at the front Haslam grabbed the lead from his team mate.

The battle raged on, and on lap eight it sparked into life as they headed into the Melbourne hairpin.

Byrne headed into the penultimate corner leading the race as Haslam made a move for the inside, he almost caused a collision with both ‘Shakey’ and Ellison but regained the lead of the race.

Haslam then led from the front but Shakey soon hit back, then on the 13th lap Haslam lost the front at Redgate and crashed out as he looked to claw Byrne back in.

Byrne then almost lost the front at the final corner with three laps to go, but he luckily saved it and went on to take his ninth win of the season.

Behind him Dan Linfoot took second place after fighting his way through the field, with Christian Iddon returning to the podium for the first time since May.

Ellison finished in seventh, with Luke Mossey the other showdown contender behind him in eighth place.

Leon’s crash surprised everyone at the circuit, including his main rival Byrne, who admitted when he was told on his pit board he didn’t believe it.

“I saw a really, really weird thing on my board, I thought it said 'LH out' but I wasn’t sure, and I thought ‘surely not, not Leon not at Donington that just wouldn’t happen.’

“The gap went up a tiny bit and I saw that Dan was in second, he forced me to get my head down again because I didn’t want to lose five points to Leon.

“It’s a great start to the showdown for us, but there are still five very tough races to come and fingers crossed at the end of them all we’ll still be in the position we are in now.”