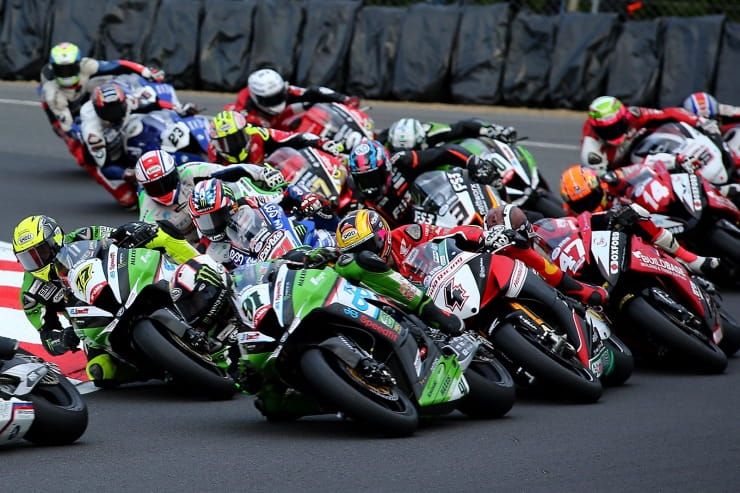 It took till the third restart to finally get the race underway, after a red flag in the first race due to an incident involving Howie Mainwaring-Smart and Filip Backlund, which has left Mainwarning hospitalised with a broken wrist.

As the second restart got underway the rain then began to fall, and the race was red flagged once again. The third restart then commenced as a wet race, but as the pack left ‘Druids’ hairpin on the first lap Haslam highsided, crashing out of the race.

However, after the race Haslam team’s boss, Mark Smith-Halvorsen, admitted that their title challenge isn’t over just yet.

“It’s definitely not gone,” expressed the Kawasaki boss. “There is 50 points left to grab and we are 27 points behind and the forecast looks changeable for tomorrow.

“From that point of view, we have every chance still, we have to stay focused and take every opportunity that comes our way racing in those conditions. Tomorrow will be the deciding factor, clearly race two will be where it is won or lost.”

Haslam’s title challenger Byrne continued in the tricky wet conditions, crossing the line in sixth position, picking up ten vital points towards to his strive for five.

Although, when questioned if team orders would be in place for tomorrow’s two races, Smith-Halvorsen remained tight lipped, but did go on to say that the team will pull together if needed.

“We’ve approached this whole weekend as a team, we never had to effect any team orders because we had three race starts and then in the final start our main championship contender was on the floor after two corners, but if needs be the team will pull together tomorrow.”