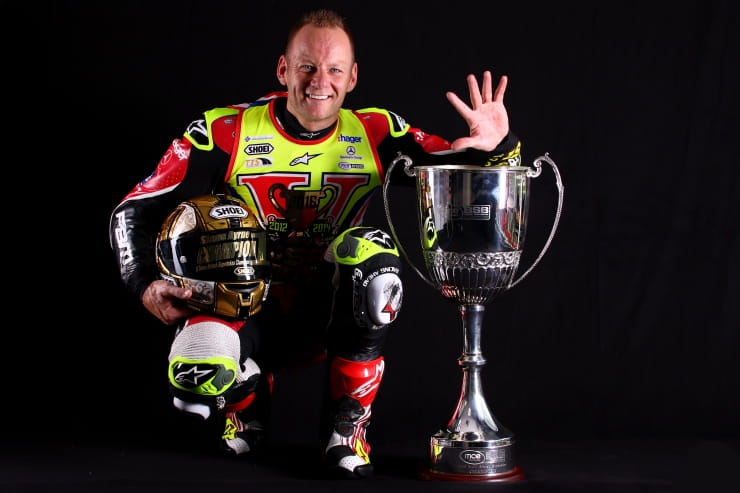 Shane ‘Shakey’ Byrne has made history by taking his fifth British Superbike crown in the first race this afternoon, taking Ducati’s first title since he last won the Championship for them back in 2008.

It was a tough race for Byrne, in tricky damp conditions and with the threat of rain looming once again, all the riders made the hard decision of running on slick tyres.

Byrne was a far back as 12th, but his title rival Haslam was battling within the same group of riders. Haslam started to make his way forward, and passed Byrne on lap four, but all ‘Shakey’ had to do was follow the ‘Pocket Rocket.’

The Sittingbourne man continued to keep tabs on the JG Speedfit Kawasaki rider throughout the race to seal his fifth title, but afterwards the 39-year-old admitted he was disappointed.

“In some ways I’m a little bit disappointed,” expressed the five times Champ. “It’s a massive achievement to take on a brand new manufacturer in Ducati, who haven’t won a Championship since I last won it back in 2008, so far we have won nine races and we have taken the British Superbike Championship, but it has been really, really difficult.

“I am a racer and I want to win races, so seeing P1 2016 when you have finished ninth in the race didn’t flow my boat if I’m honest.”

Although Byrne had sealed his success with one race to go, the man of Kent admitted that it hadn’t been the best of weekends, but this evening it will all sink in.

“Tonight after one or two glasses of champagne it will feel absolutely brilliant, but right at this minute it has been a frustrating weekend, I finished sixth yesterday, I finished ninth in race two and it’s really difficult to be enthusiastic about the positions.

“I’ve concentrated all this week on making sure this weekend is as normal as any other, and a normal weekend means I’m fighting for race wins so when I’m having to take a sixth or a ninth just to be safe it’s hard to be super happy. But, ultimately the history books will say I am a five time Champion, and that is a big weight off my shoulders.”