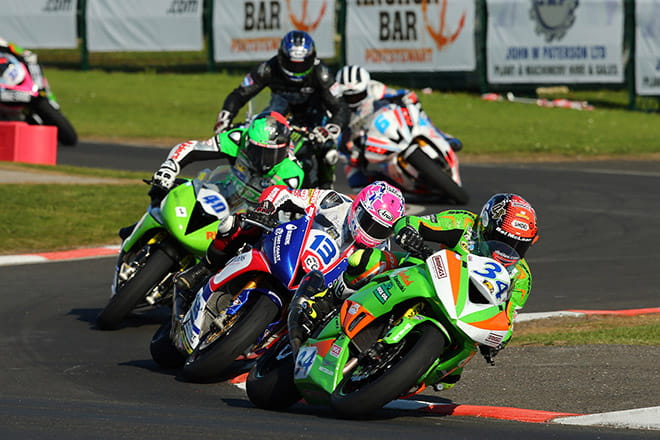 Alastair Seeley took a record-breaking 16th victory at the North West 200 on Thursday evening when he won the opening Supersport 600cc race of the 2016 meeting. Riding the Gearlink Kawasaki, Seeley was involved in a terrific eight-rider dice for much of the race but pulled away in the final lap and a half to take the win by just over a second from Ian Hutchinson and Martin Jessopp.

"It's a dream come true, as a boy I dreamt about fantastic things like this," said Seeley afterwards. "To be mentioned in the same sentence as the Dunlops is overwhelming. I dropped to fifth mid-race, reprogrammed my brain and once I got a clear track I felt comfortable. I hit all my markers, got back in the lead, and when I saw Hutchy behind me, I took a defensive line into Juniper and along the coast road to take the win."

Seeley led at the end of the opening lap from Jessopp, Lee Johnston, James Hillier and Hutchinson but the lead was changing hands all the time as just four seconds covered the top ten.

At half race distance, Hutchinson – fifth on the opening lap – began to make his move and took the lead from Jessopp, diving up the inside at Metropole. It was still tight though with his advantage just 0.03s at the end of the lap as a freight train again lined up behind him.

Lap four and Seeley hit the front at Magherabuoy and although he briefly lost it to Hutchinson, the penultimate lap saw him stamp his mark on the race. With a determined run along the coast road, always his strongest section, he began to pull away and, try as he might, Hutchinson was unable to make any inroads on the final lap. 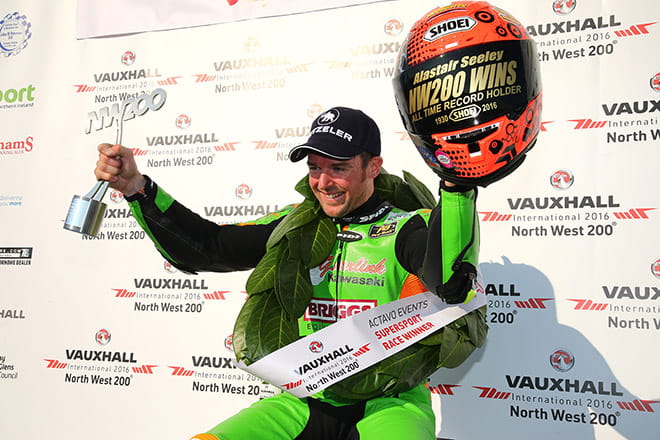 The race action was then halted by a fire on the inside of the circuit before the Supertwin race could get underway and when it did there was a four-rider battle at the head of the field. Unfortunately, on the third lap an incident at Black Hill involving race leaders Ryan Farquhar and Dan Cooper saw the race stopped.

Cooper was taken to Causeway Hospital, Coleraine by ambulance after sustaining shoulder injuries while Farquhar was transferred by PSNI helicopter to the Royal Victoria Hospital, Belfast with chest and pelvic injuries. Both riders are in a stable condition and neither has life threatening injuries.

The race was declared at three laps with Ivan Lintin awarded the win from James Hillier and Jeremy McWilliams. With the setting sun already causing problems, the remaining Superstock was cancelled and re-scheduled for Saturday.