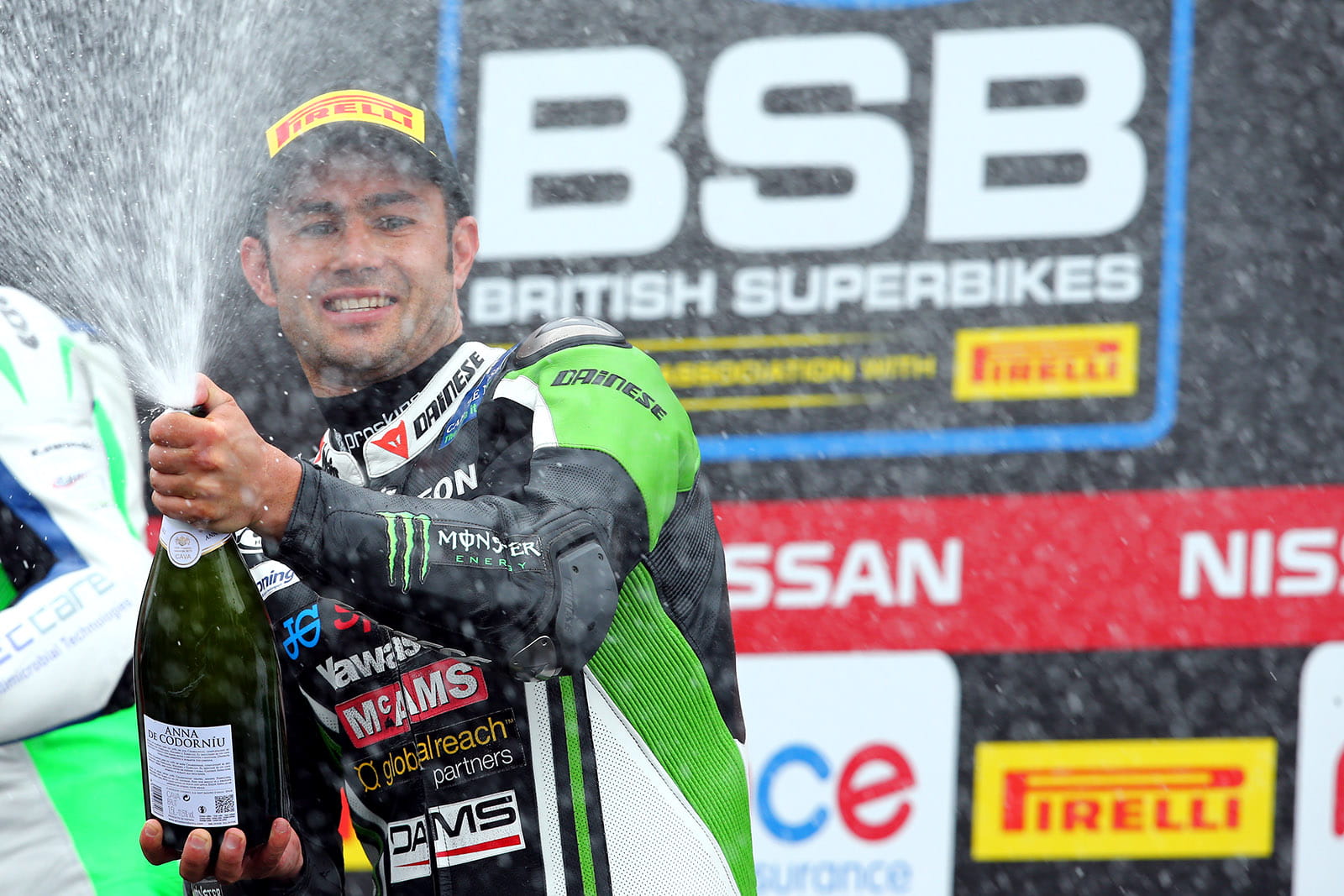 Leon Haslam walked away with a 13-point Championship lead from nearest rival Shane ‘Shakey’ Byrne, after taking his third win of the British Superbike season on board the JG Speedfit Kawasaki, but the four-time Champ wasn’t giving up easily taking a hard fought victory in a very wet race two.

Race one saw Haslam take the holeshot after a great start in dry conditions, but he had to contend with a charging Honda Racing’s Dan Linfoot. The Yorkshireman took the lead from Haslam at one point, but the gritty ‘Pocket Rocket’ wasn’t having any of it and bit straight back to regain the lead.

The Kawasaki man then continued to keep the gap behind him and Linfoot to a good distance, safely crossing the line first.

Haslam extended his Championship lead further in race one following a DNF for Byrne, who crashed at the final hairpin, unfortunately taking down young rider Jake Dixon (who he mentors) in the process as the RAF Reserves Briggs Equipment BMW man couldn’t do anything to avoid the crash.

Race two would see different weather conditions after a major downpour rain an hour before the start of second outing. Byrne started from eleventh on the grid, and got a great start and began to chase down race leader Haslam. 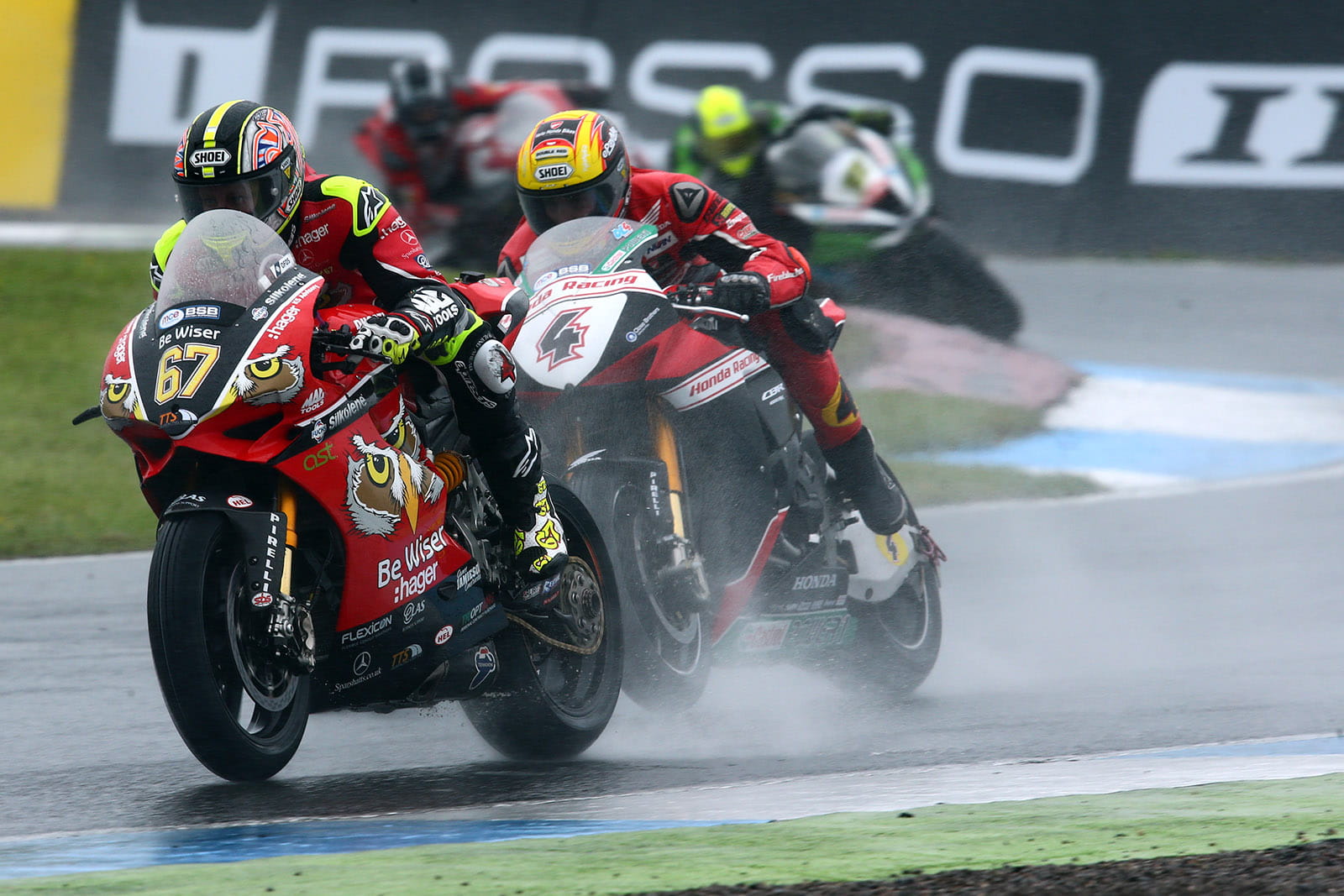 After swapping and changing places with Dan Linfoot from lap 14 onwards, ‘Shakey’ left it late to make the final move, but on the 26th lap he cleared off into the distance to pick up his second win of the season and closed the gap back to 13 points.

James Ellison made his move extremely late on the final lap, powering over the line on the back wheel past Dan Linfoot who made a slight mistake on the run to the line.

“Starting from the fourth row of the grid, in the wet with all the spray wasn’t ideal,” said Byrne. “But for once I held my own or went ever so slightly forwards off the start which was really good. I led for a brief period, and then dropped back to second and then third.

“I thought I’ll sit behind Leon but I was being a bit of a fairy into turn one because I felt the back was going to come round on the bike and I had a few moment and so did Leon, and then I calmed down then. Dan then came past and he was riding really well and looked really smooth. I got back past with five laps to go and then I tried as hard as I did to pull the pin.

“We got it done and the two tracks I envisaged as being the most difficult rounds for us, we have won a race at each of them and that shows progress from us and the team.” 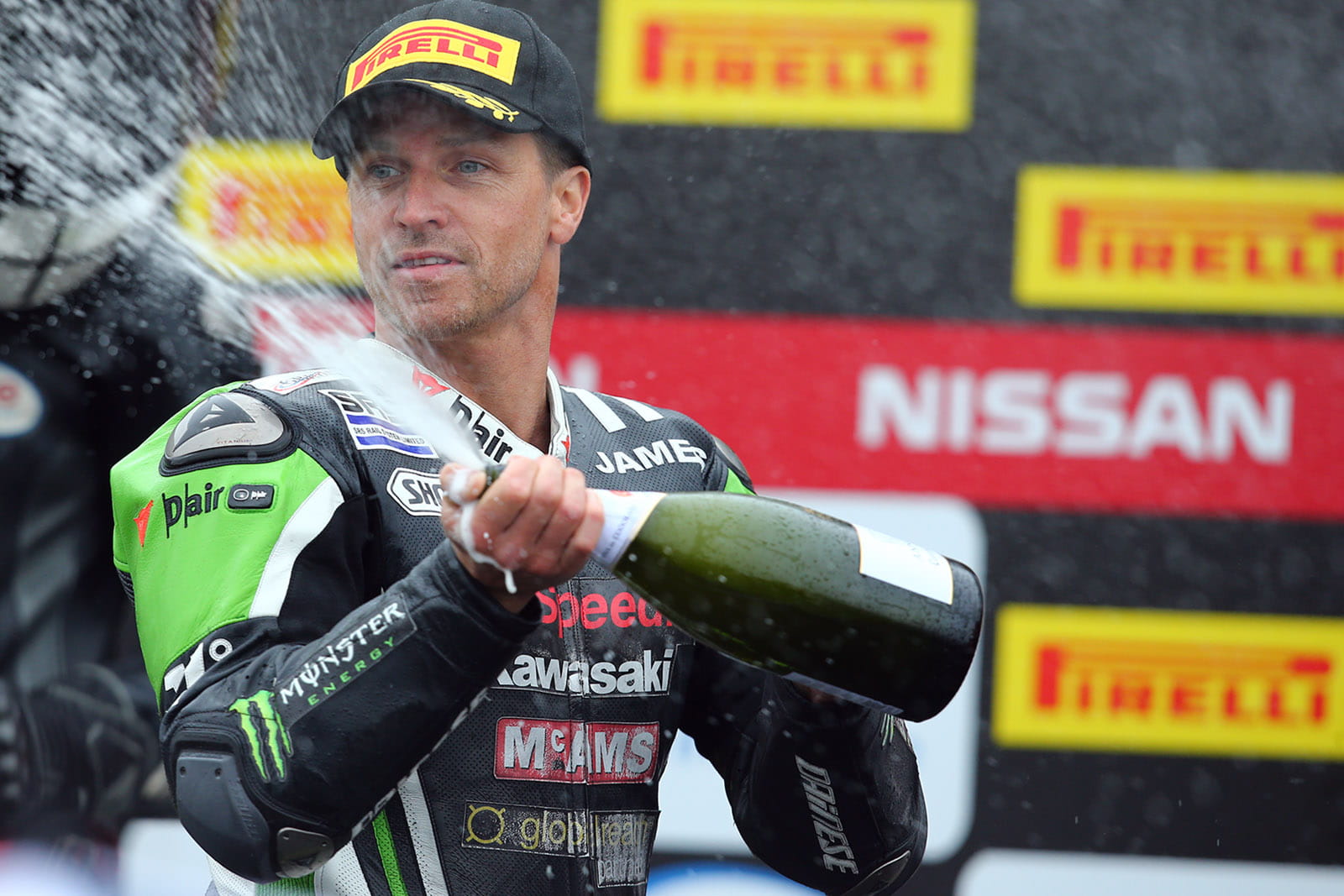 One man smiling in pit lane after the race was James Ellison, he said: ““I’m peaking with that, I was peaking when I was in third but Brands Hatch was flashing back in my mind and I was pushing as hard as I could anyway. Dan looked like he was out of reach for second place but like every race I gave 100 percent till the last lap and it paid off.

“I’m really happy to get the second, I gave it more throttle than normal over the line the bike was spinning and when the thing hooked up it threw the front wheel up in the air and I just didn’t want to roll off. I’m really happy.”

“I’m not over the moon but I’m definitely happy,” expressed Honda Racing’s Dan Linfoot. “It’s probably the biggest points haul I have ever taken from a race, and my first ever double podium so I’m definitely happy. I’ve never had a podium here so all in all its been a good weekend, mainly because my Championship position was quite low before so hopefully I’ve stuck myself up there quite a bit.

“You go racing because you want podiums and when you don’t get podiums you aren’t happy so two make you happy. I’m just looking forward to getting to Snetterton now!"