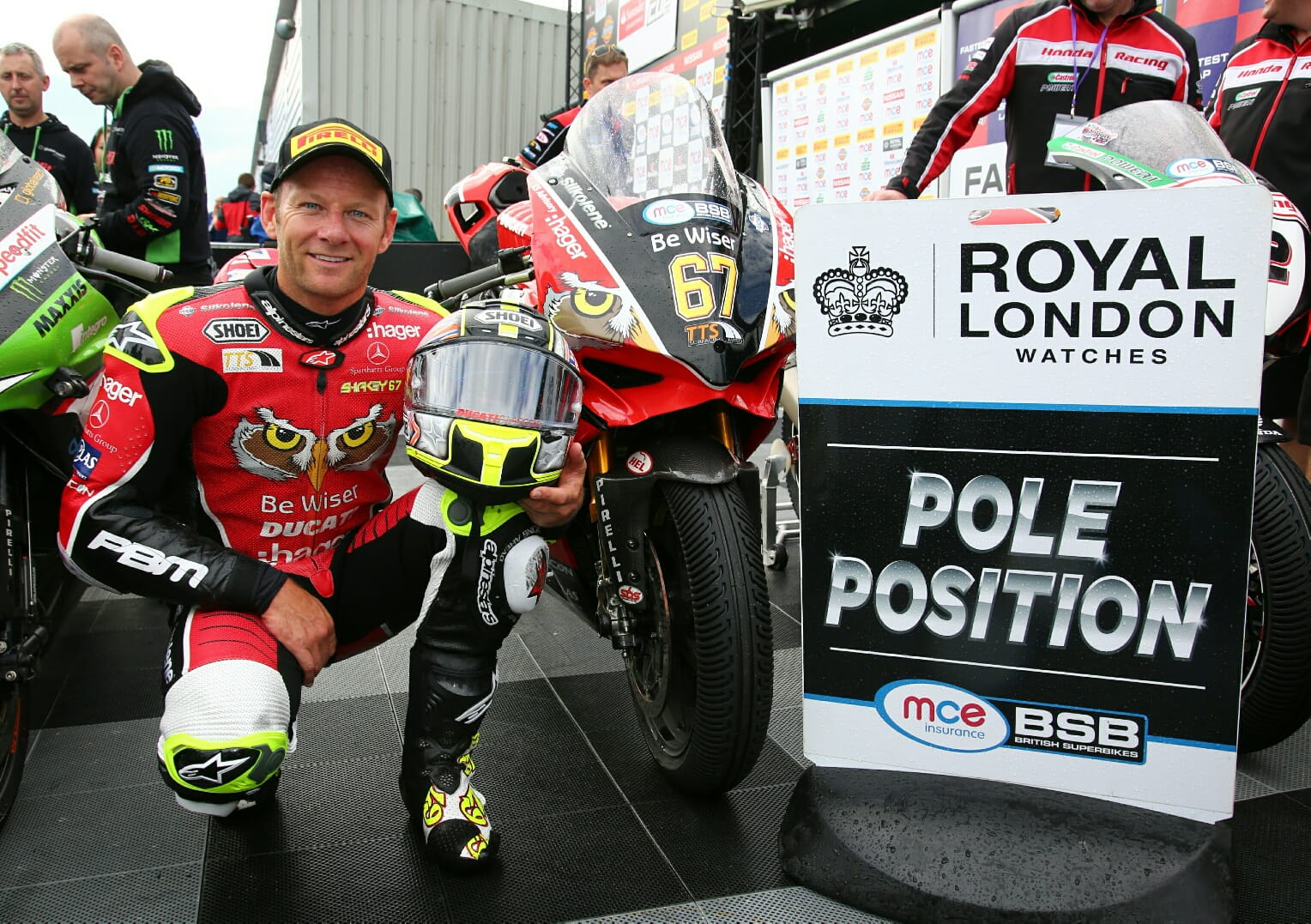 Shane ‘Shakey’ Byrne has taken his first pole position of the season in a tricky wet British Superbike qualifying session this afternoon at Knockhill, and Ducati’s first since Jakub Smrz at Thruxton in 2014.

The weather took a turn for the worse just after the first session ended, where the heavens opened and forced an hour delay to proceedings, but that wasn’t going to stop the inform four time Champion.

The Be Wiser Ducati rider looked unstoppable around the 1.3 mile circuit, however he was nearly stopped in his tracks by Honda Racing’s Jason O’Halloran who missed out on his first British Superbike pole by 0.001 of a second.

Championship leader Leon Haslam tried with all his might in the drying final dash for pole, but was knocked back by the Australian in the final few minutes to the final spot of the front row.

After taking his first pole of the 2016 season, Shane ‘Shakey’ Byrne said: “We have a completely new programme we are working with and step-by-step it is getting better and better. We needed to score as many points as we can at the start of the season to stay in the top six with some podium points to get through to the Showdown. By then we should have had two or three stages of development on the bike and have the tools to fight for another championship.

“The fact that we had a good race at Brands Hatch made me happy but when I went to the Snetterton test I felt absolutely lost and knew how difficult this thing is to ride. The boys have done a great job at every track we’ve come to and moving on from the initial setting the bike gets better and better.

“In fairness at Knockhill, okay you need some power to get out of the hairpin and over the hill,” said Byrne. “But it is really tight and twisty and key is the handling of the bike and how well it puts the power down. The Ducati seems to do that very well in the wet.” 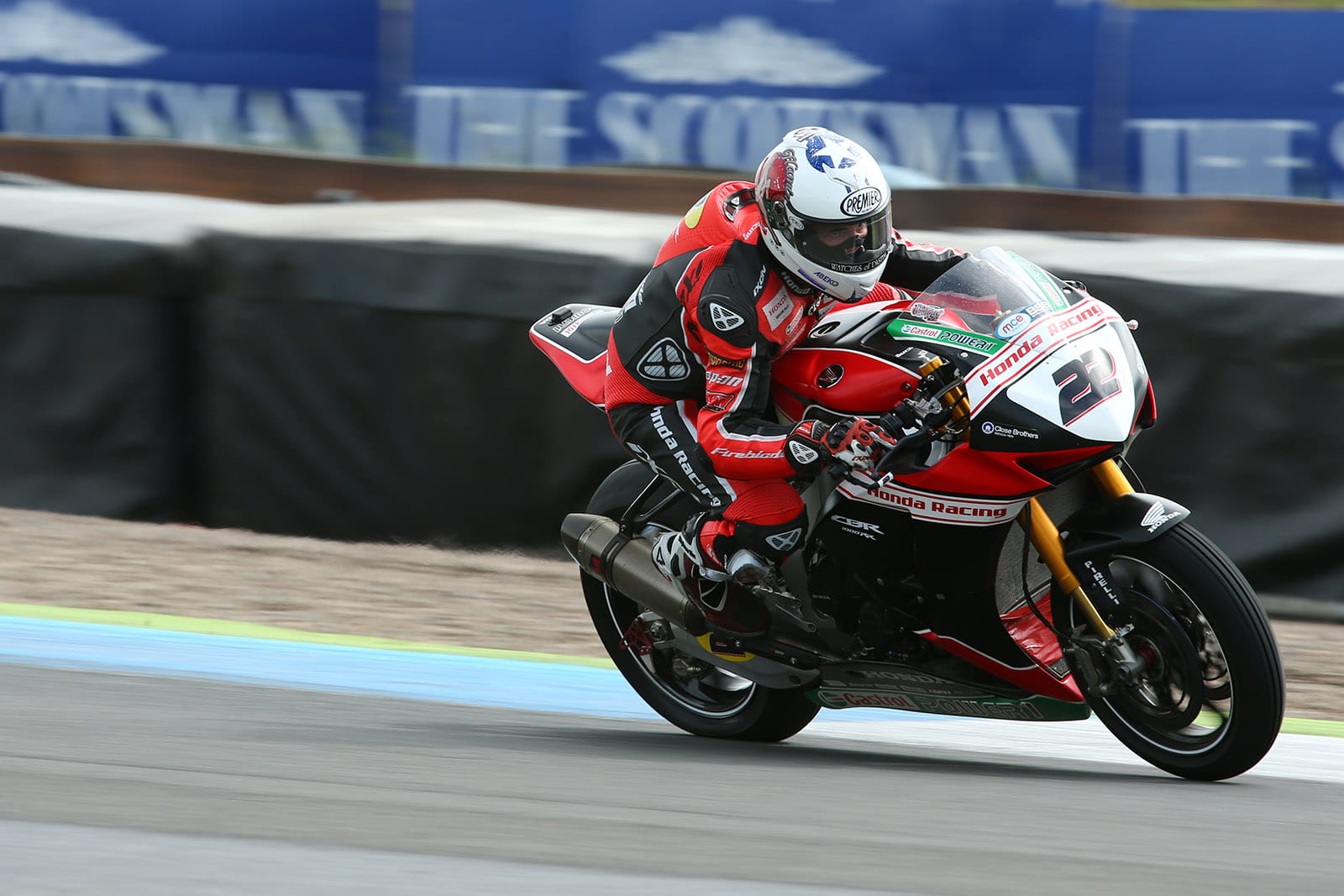 “I had a really good feeling straight away in the rain so I felt comfortable to push,” expressed Jason O’Halloran afterwards. “We made a little change at the end of Q2 but didn’t get a chance to test it so we went back to what we had at the start of Q3. I was struggling for entry grip and was backing in quite a lot. If it wasn’t qualifying I probably would have made some changes. But on the whole everything felt okay and could keep doing the laps.

“I might do a rain dance tomorrow. I’m happy either way. I’m happy in the dry even though in Q1 we were a little bit down with a couple of issues but I think we can still improve in the dry still and if there is rain I think we are okay in the front group.”

Happy to be on the front for tomorrow’s first race Leon Haslam said: “Honestly every lap I was knocking 0.5 to 0.6 off, everyone was doing the same and it was the first time we rode in the wet here, because this morning was half dry. I feel pretty good with the dry, there are a few things I’d like to change for tomorrow if its wet, but it has given us some good information.

“Everyone is saying the weather is supposed to be better but it can change, and I won’t be looking at the phone deciding which leathers to put on.”