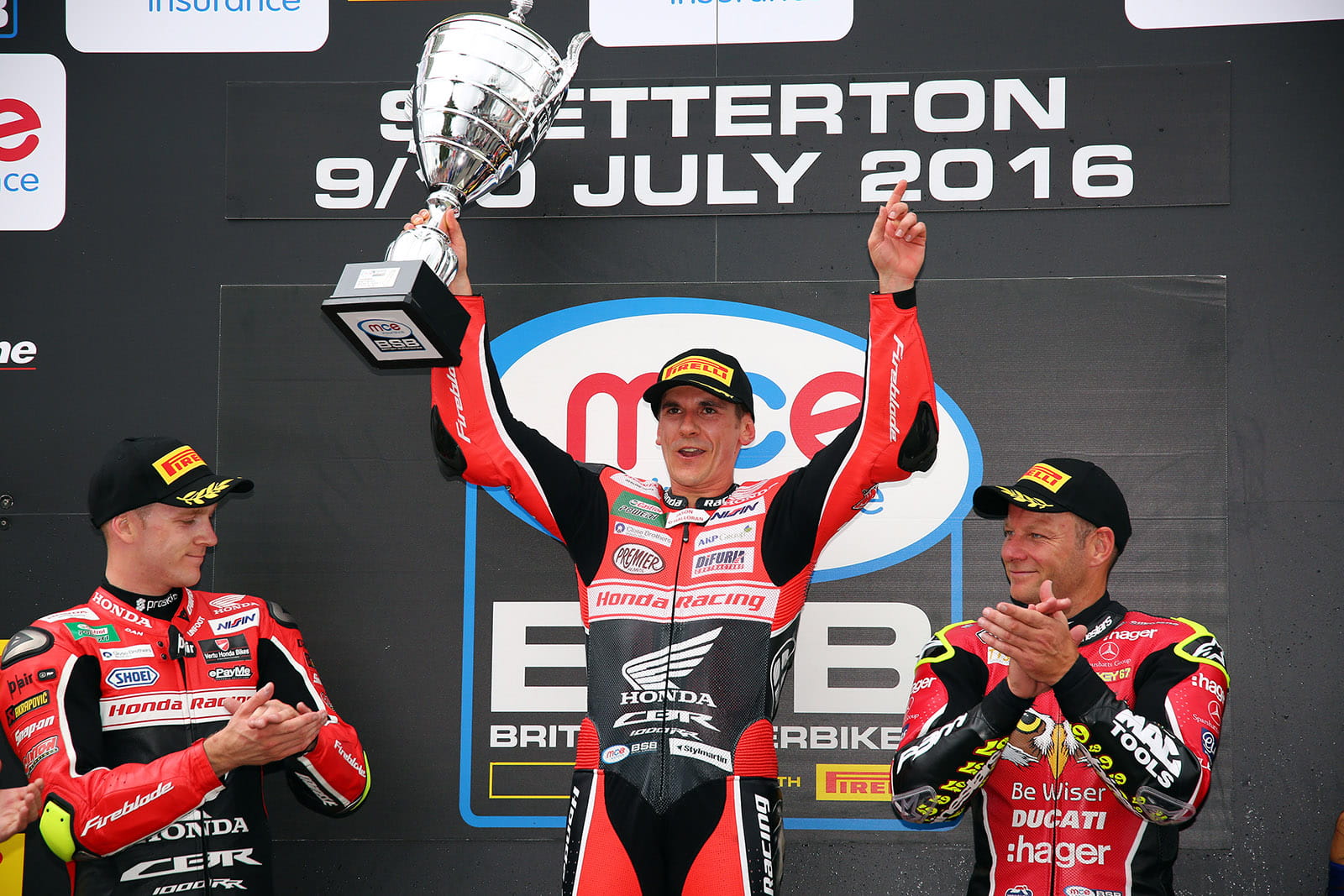 Race one saw Jason O’Halloran take his first win of his British Superbike career, after battling hard with Dan Linfoot. From the lights it was Shane ‘Shakey’ Byrne who got the holeshot from pole position, but Haslam soon made his move at the hairpin.

There was then devastation behind the leaders as Richard Cooper and James Ellison crashed out in a harsh collision, then at the next corner Haslam and Byrne almost collided, with ‘Shakey’ having to run on and re-join the race dead last. 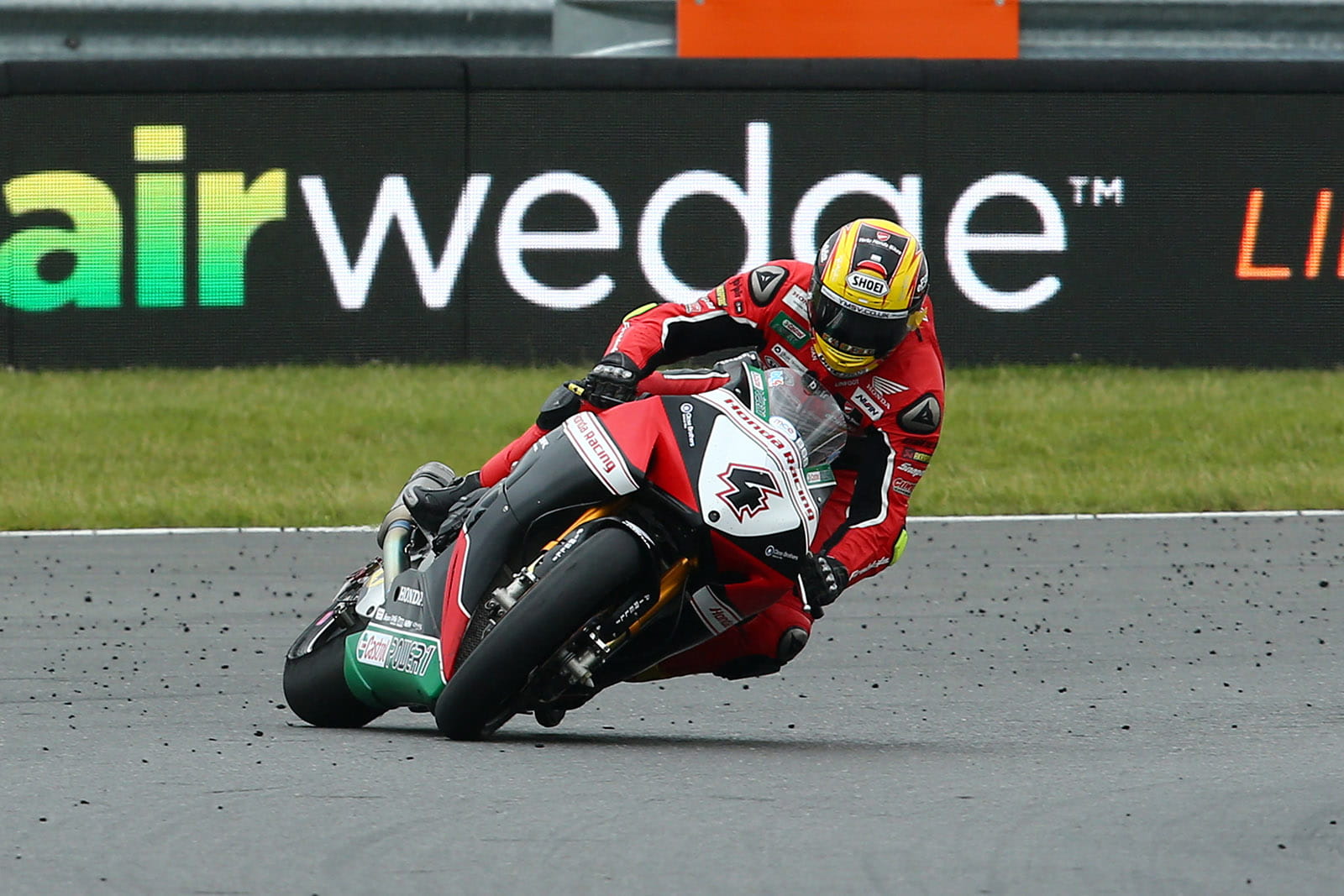 The Honda Racing duo took off mid race, duelling it out for the lead all race long. Byrne then started to move through the pack, setting a new lap record in the process, half a second faster than anyone else on the track.

Lap eleven saw the four-time Champion take the final podium spot off his title rival Haslam, as tyre wear became an issue for all riders. Rain started to fall with only two laps left, and back at the front Linfoot made his move.

On the final lap both team mates battled it out, and then as they both powered out of the final chicane ‘Linny’ nearly highsided leaving O’Halloran to pull past on the drag to the line, taking the flag for his first British Superbike win, with Linfoot second and Byrne third. 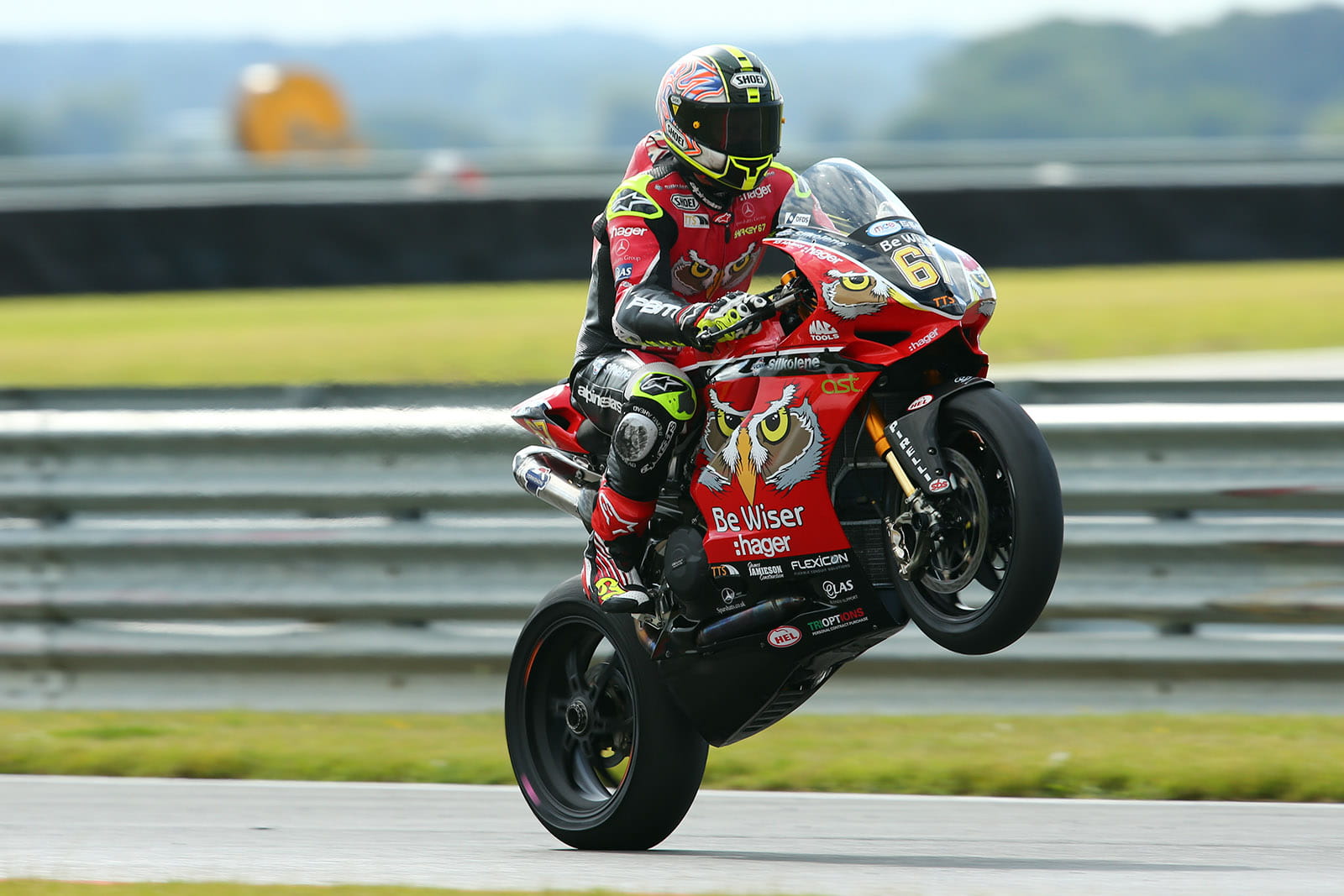 Race two saw Byrne get a great start from pole position, and led from the front with Linfoot in hot pursuit. The battle for third was the one to watch, with Michael Laverty, Leon Haslam and first race winner Jason O’Halloran all dicing for position.

The Be Wiser Ducati rider couldn’t shake off the challenge from an in form Linfoot, however with six laps remaining the red flag came out, after a big crash for Jenny Tinmouth, which spilt fluid all over Nelson corner.

“It’s been a positive weekend,” said Byrne after race two. “The championship lead doesn’t mean anything, all it means is that you get the first garage instead of the second one, and I know my boss likes the first garage.

“The first part of the second race was slow, and then I got down to low to mid 48’s and I had seen in the first race that the Honda guys didn’t do too many 48’s. So I thought to try and rattle off a load of them and see where we go. I got round to Coram and saw the red flag and I knew we had done enough laps. Dan and I went and did some wheelies for the crowd.”

Pleased to secure four podiums in a row Dan Linfoot said: “Race one I was utterly gutted to be honest, I came out of the last corner leading and I thought it was mine, and the little error cost me it, but still second was a good result because of the points. Going into race two I was angry from the first race, but I had to control that anger so I wouldn’t make a mistake.

“I got onto the back of Shakey and I thought ‘right I’ll hang in here and hopefully get pulled away and see what we can do’, obviously the red flag came out at the time and there was only half a second in it. But it’s still a good performance, two podiums I’ve got to be happy and we’ve recovered a good amount points, which was the important thing.”

“It’s been a tough weekend,” expressed Tyco BMW’s Michael Laverty after taking third place in race two. “Unexpectedly so because we were really fast at the test and the bike was working good. I crashed in the wet in FP3 when I was working hard because we needed to improve our wet setting and that caught me out.

“I got caught out in qualifying, losing the front and I was in the wrong place at the wrong time in race one so I was on the deck three times before race two. It was nice to get a podium out of it, it was a good performance and has highlighted a couple of areas where we need to improve on our bike.”