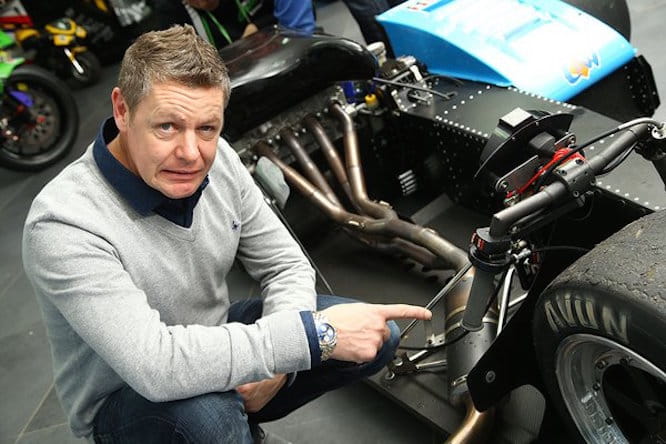 Fans’ favourite Chris Walker will make a shock switch to three-wheels as he moves to the British Sidecar championship for the 2016 season.

The move comes as Walker, determined not to end his racing career, was unable to find a strong seat on the British Superbike grid for the season ahead. The veteran racer was further restricted in wanting to ride a Kawasaki given his strong affiliation with the Japanese marque through his Kawasaki dealership in Grantham.

The 43-year-old was left high and dry towards the end of the 2015 season following the collapse of the Be Wiser Kawasaki squad but was hoping he’d be able to put together one final season in the series before hanging up his leathers.

However, with fewer Kawasaki's on the grid this season than last Walker found his options were limited and will instead turn his hand to something new, making his debut in the sidecar series with the established Santander Salt Kawasaki squad.

Running a ZX-10R-powered outfit, Walker will compete against some of the best names in sidecar racing including Tim Reeves and the Birchall brothers.

"The BSB paddock feels like my home and so I am really excited by this completely new challenge, especially as the British Sidecar Championship is going from strength to strength. I have no knowledge of it so I am full of anticipation, although I have to say it is still a bit daunting," Walker said on the move.

"There is so much bright talent emerging in BSB right now and I have looked at the larger picture; I am a racer through and through, I always will be. This is a time for some of the young riders to get their chances whilst in my mid 40s I can still go racing and still get that feeling of a challenge, which is an amazing thing to be able to say.

"I really don't know what to expect and that is what I think excites me the most. The sidecar is completely different to a Superbike in terms of the gearing and braking so I am sure that will be something for me to get my head around, but the biggest draw for me is the new challenge.

"I have the security of some great team-mates and good people around me who I can learn from. I want to come out and chip away because I know that this is probably one of the biggest challenges of my career. With a Superbike I had ridden a bike since the age of three; I have only had a go in a sidecar once and that was in 1986 and a completely different animal!

"I have no preconceptions and I am realistic about the season. I will approach it like I did when I first raced Superbikes and that is to learn from my more experienced team-mates and use that as a gauge and just keep trying to improve.  Hopefully the same thought process that worked for me in my Superbike career will replicate onto three wheels too! The team have shown faith in me by giving me this opportunity and I am just excited now to get started."