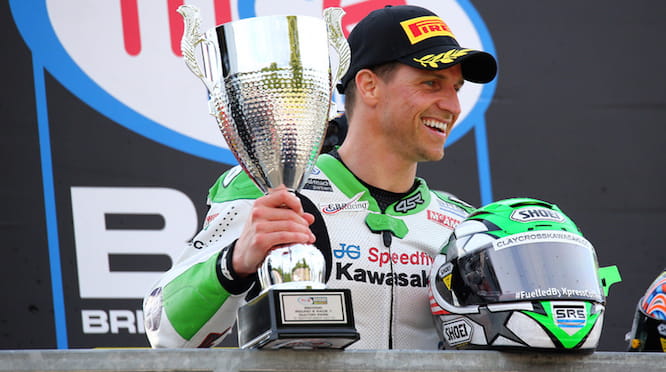 James Ellison rode to a heroic second place in yesterday’s first race at Oulton Park, just a matter of weeks after breaking his wrist in a crash at Thruxton.

The JG Speedfit Kawasaki rider opted to sit out of proceedings at Cadwell Park but returned with a vengeance this weekend in order to secure his place in the three-round title fighter showdown; and that’s exactly what he did.

After qualifying on the front row even the Cumbrian himself doubted whether he’d be able to maintain the pace across race distance. However, a strong start saw him slip into third place, before moving up to second following the retirement of Tyco BMW’s Tommy Bridewell.

Holding off a charging Danny Buchan, Ellison crossed the line with the race victor in sight to round-off a remarkable performance, bringing tears to the eyes of team boss Mark Smith Halvorsen.

The result saw him confirm his place in the showdown, meaning he can relax a little in the remaining two races before the title fight kicks off at Assen in two weeks time. 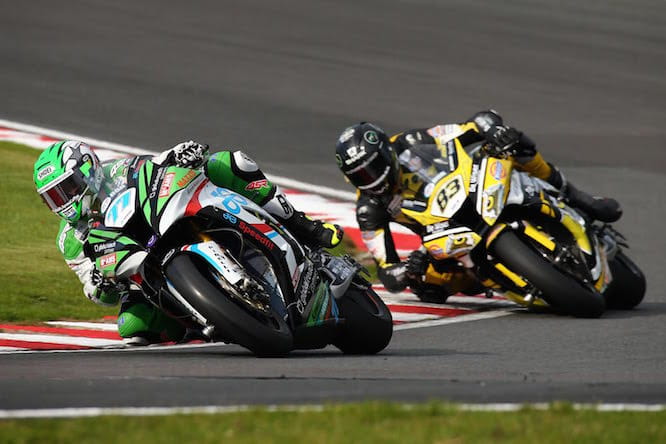 “It feels good to be confirmed in the showdown by a point,” said Ellison after the race. “We have achieved what we wanted to do and it only took one race. We were a bit worried about a triple header here this weekend as we knew that we needed Linfoot to get less than 42 points otherwise he would have jumped us, so we had that in our mind.

“My team boss was peaking, he had a tear in his eye and we had the added bonus of some champagne and silverware. I want to say I am surprised as I came here with that focus in my mind of wanting to get on the podium, as you have to set your goals high but realistically I didn’t think it was going to happen so I’m chuffed to bits.

“The injury was pretty bad towards the end of the race, when I am on my own and in a rhythm it is OK but Danny Buchan kept me honest. When Shakey [Byrne] started coming back towards us a little bit I refocused on him rather than keeping Danny behind and the lap times came down again.

“Shakey must have seen on his board as for the last couple of laps he droped the hammer again and I started to make a couple of mistakes messing my wrist up trying to hold on to the bike. We were riding at pretty much lap record pace but we got through it and will see what we can do tomorrow.”