Brookes defies tricky conditions to take the double in Assen 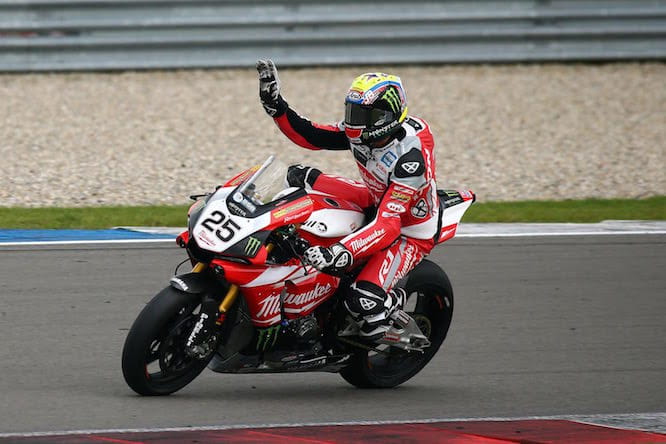 Starting from pole position, Brookes took the lead early in race one and looked to check out on the first lap. JG Speedfit Kawasaki’s James Ellison tried to go with the Aussie, but the Milwaukee Yamaha’s superior pace was enough for Brookes to build a gap.

Front row starter John Hopkins was fighting for third with Shane Byrne, until the rear locked for the PBM Kawasaki rider allowing Hopkins through with Michael Laverty close behind.

At half distance, Brookes’ lead sat at 1.5 seconds as Christian Iddon and Richard Cooper joined the battle for third, which had been re-claimed by Byrne.

Laverty shot up the inside of Hopkins into fourth on lap 13 before lunging past Byrne to take the final podium spot.

Byrne tried to return the favour to the Ulsterman on the final lap, but ran wide allowing the Tyco BMW man to take his first podium of the year.

Hopkins crossed the line fifth ahead of Cooper and Iddon, with Tommy Bridewell, Peter Hickman and Danny Buchan rounding out the top ten.

As riders lined up on the grid for race two, the rain began to fall leading to Race Director Stuart Higgs’ deciding to delay the start.

The ever changing nature of the weather at Assen saw the riders set off on their warm-up lap 15 minutes later, only for the rain to fall once again bringing them back into the pits.

When the race finally got underway it was declared wet but most of the track was dry. Most riders opted for dry weather tyres but Dan Linfoot took the gamble on wets from 16th on the grid. 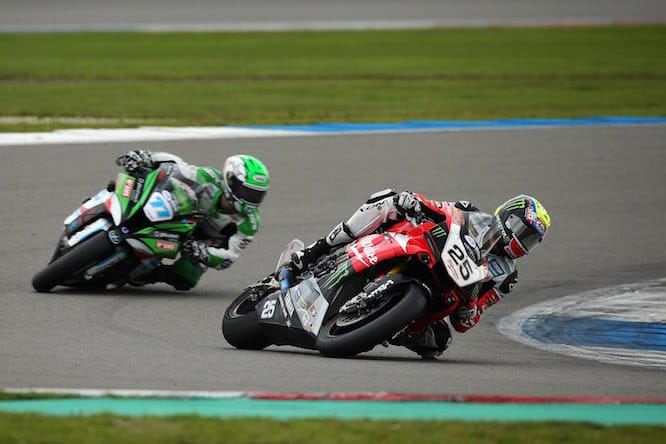 Brookes took the early lead, but enjoying the confidence from the wet tyres, Linfoot charged through and took the lead on the third lap.

Iddon, Mossey and Richard Cooper were close on Brookes’ tail as Tommy Bridewell crashed out on the fifth lap.

With Linfoot’s gamble not having paid off, he started to fall through the pack and after a few hairy moves, Mossey took the lead on lap five as a moment saw Brookes drop behind fourth-placed Iddon.

Sensing his opportunity to make ground up in the championship, James Ellison charged through the leading pack to take the lead on lap seven, but having followed the Cumbrian through, Cooper wasn’t going to make his life easy.

Having seen Ellison start to build a gap, Brookes moved through into second at the end of lap eight leaving Cooper and Mossey to scrap it out for third.

A small moment for Ellison on lap 12 of 15 saw Brookes close right in, before lunging up the inside to take the lead on the next lap.

Mossey completed the podium in third, ahead of Richard Cooper and reigning champion Byrne, who suffered a bad day at the office.

Christian Iddon took his best result of the season for Bennetts Suzuki in sixth, ahead of Jack Kennedy, Chris Walker and Michael Laverty with Jakub Smrz rounding out the top ten.

Brookes’ double sees him lead Byrne in the championship standings by 28 points, with Ellison now just 13 points behind Byrne.

“It’s not just the double, I’ve done that a few times now, but to do it now at the most crucial point and with all the crazy things that have happened, especially last year there was a lot that didn’t go my way and this year I’ve had plenty of situations thrown at me but together with myself and my team we have done the best we can and come out shiny the other end,” said Brookes after the race.

“A lot of the racing I have done in the middle of the season had very little effect on the championship standings so for the points to matter this weekend makes a real difference.”