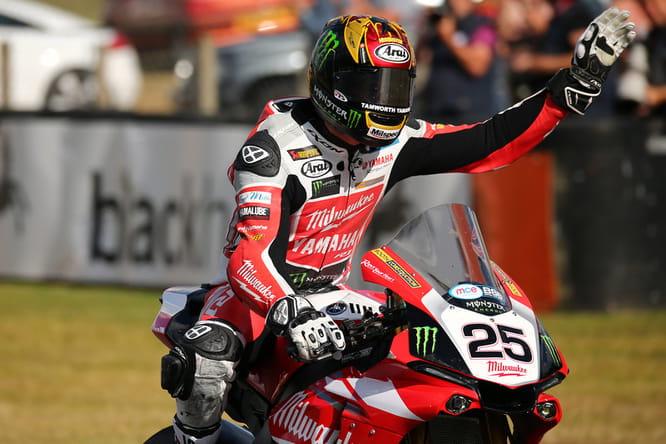 Josh Brookes has been crowned 2015 British Superbike championship after defeating Shane Byrne in the first of three races at Brands Hatch.

Byrne gave all he had at the start of the race and a right old ding dong ensued between the pair, but when Brookes passed the four-time champion on the 12th lap he was able to pull six bike lengths in just two corners.

Powering on, Brookes pulled a steady gap on his rival to cross the line to take his twelfth win of the season and push his championship lead over the magic 50 points needed to claim his first ever British Superbike title.

First joining the British series in 2009, Brookes soon established himself as a frontrunner but he wasn't particularly popular in the early days, earning himself a reputation as 'bad boy Brookes' as a result of his involvement in a number of questionable incidents.

He took his first race victory at Thruxton on the HM Plant Honda in 2010 before losing out on the title to team-mate Ryuichi Kiyonari.

Making the switch to TAS Suzuki in 2011, Brookes was less of a title threat finishing the season fifth overall. Showing improved from the year after, Brookes narrowly missed out on the title to archrival Shane Byrne in the showdown stage. However, under a conventional points system the Aussie would have been crowned champion.

A poor start to the showdown in 2013 saw Brookes miss out on the title fight in the final round, finishing third behind Alex Lowes and Shane Byrne.

In 2014, the Aussie moved to Shaun Muir's Milwaukee Yamaha squad but struggled aboard the flagging, older Yamaha R1. Despite winning four races, he could only manage fourth in the title standings.

Remaining with Muir for 2015, Brookes would challenge for the title aboard Yamaha's all new YZF-R1, and while it took the Guisborough outfit a little bit of time to get going, when they found their pace they were unstoppable.

Brookes took six wins in a row from Brands Hatch to Cadwell Park and has so far won every race in the showdown and has only been off the podium twice across the entire season.

With the future of the Milwaukee Yamaha team in doubt, Brookes' plans for next year are uncertain. If the Milwaukee-backed team are racing, he's certain to be with them whether it's in British Superbikes. If not, it's likely he will be reunited with Tyco-backed TAS racing on the BMW S1000RR.