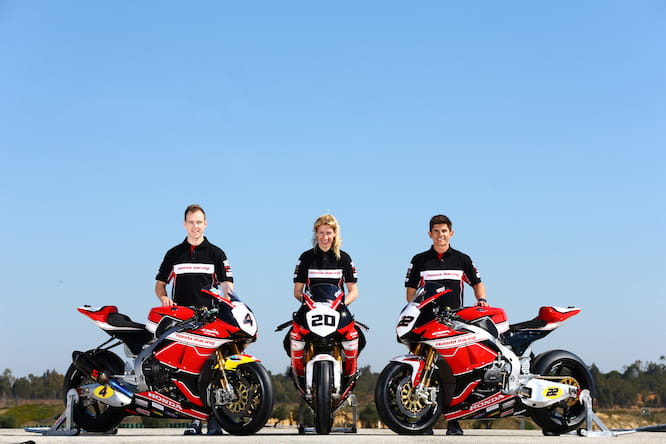 The Honda Racing Team will retain its three-rider line-up for the 2016 British Superbike Championship.

Dan Linfoot and Jason O’Halloran both showed promise in 2015 despite what turned out to be a difficult, injurty-blighted season for the Louth-based Honda outfit.

Having fought for the win with Shane ‘Shakey’ Byrne in the opening round at Donington Park, things were looking good for Honda and Linfoot ahead of the second round at Brands Hatch, but this soon changed when the Wetherby rider crashed out of first free practice breaking his wrist. Missing two rounds with the injury, Linfoot returned to salvage a place in the title fighter showdown and rounded out the season sixth in the standings.

Despite a steady start to the season, O’Halloran took a handful of top ten finishes and two podiums before a big crash in qualifying at Thruxton that saw the Australian badly break his leg, ruling him out for the rest of the season.

Jenny Tinmouth stays on as the team’s third rider after a promising first season with the factory team, improving her personal best lap times at every circuit on the calendar earning a chance to stay with the team for another crack in 2016. 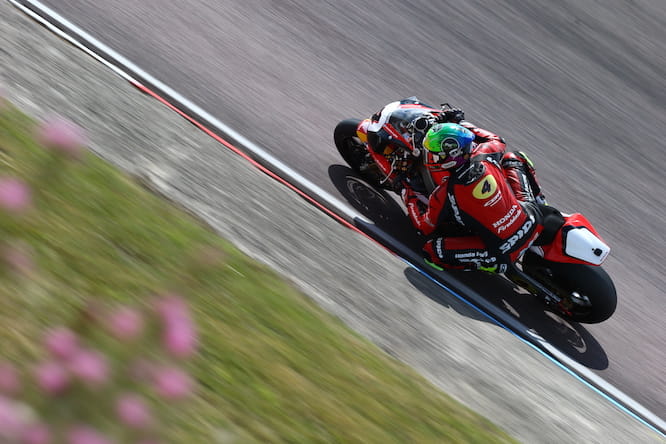 “I’m very happy to be back in the Honda family for 2016 after a successful season - although it did have its highs and lows - we finished fifth and that’s something to build on and come into the new season fighting,” said Linfoot.  “It’s been fantastic working with the crew this year and to re-sign with a team for a second year is something I have been working towards for a while, it will be great to start the next season where we left off. If we can start consistent and stay injury free then I feel we could really challenge for the title and do the Fireblade some justice. A huge thanks to everyone at Honda Racing and all the sponsors for the continued support, I enjoyed being with the team this year and am looking forward to getting back on the CBR when we start our testing programme in the New Year.”

“I’m really pleased to be staying with Honda, in what will be my sixth year with them,” O’Halloran added. “To have their support after my injury and missing the second half of the season has kept me going and makes me just want to come back stronger than ever. When I got injured I was lying fifth in the championship, finding my feet and felt like I could have secured a place in the Showdown, so it was a huge blow to myself and the team that I was forced to pull out. It’s been a tough few months recovering from the injuries, but these things either make or break you and I am probably stronger now than I have ever been, and can’t wait to get back on my Fireblade for testing in the New Year. I think going into 2016 we’re in a better position than we were this year, we learnt a lot during the first few rounds and I think we can have a strong championship, we have a great package with the bike and the team so I see no reason why we can’t be challenging for podiums from the start.”

Tinmouth said: “I’m over the moon to be part of the Honda Racing team for a second year; it was a dream come true when I was asked to join last year and to be back for next year is just mega! This year I got to know the Fireblade, the team and we collected a lot of good data, so we can go into the next season with most of the hard work done and just get cracking. It’s really good to also have Dan and Jason in the team again; they have been great to have in the garage and always offering help and support. I can’t wait now until our testing starts in March, I’m counting down the days!”