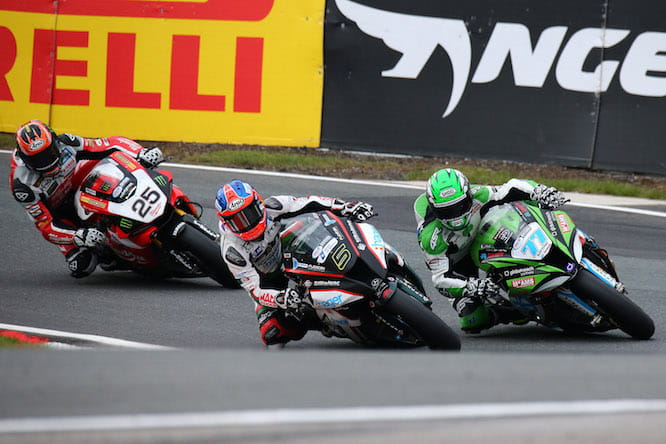 Stuart Easton has said he is relieved to have taken his first British Superbike race victory since 2010 after clinching the win at Oulton Park this afternoon.

The Scotsman was fighting at the front throughout both races and was comfortably in a podium spot in the closing stages of race two when Ryuichi Kiyonari clipped the back of Shane Byrne causing them both to crash out.

This left Easton in the lead, but with James Ellison and Josh Brookes breathing down his neck it was never going to be easy for the PBM man.

Holding his own, Easton pushed hard to cross the line and take his first victory since winning for Nick Morgan’s MSS Kawasaki team at Oulton in 2011.

“I’m very happy, more relieved to be honest!” said Easton after the race. “It’s nice to get my first win after my 2011 injuries. I came back, did some supersport and now we’re finally back on the top step in BSB. It was a fair bit fortunate but at the same time the top six were all so equally matched today anyway so you could have ridden a great race and been at the back of the bunch. It fell for me today and I’ll gladly take it and move on to the next one.

“It’s definitely a confidence boost. This year we have pretty much run with the boys at the front. Like I say the top six is really close so it’s going to be tough but we’ve had a good day today and we can keep working hard and look forward to the next one.”